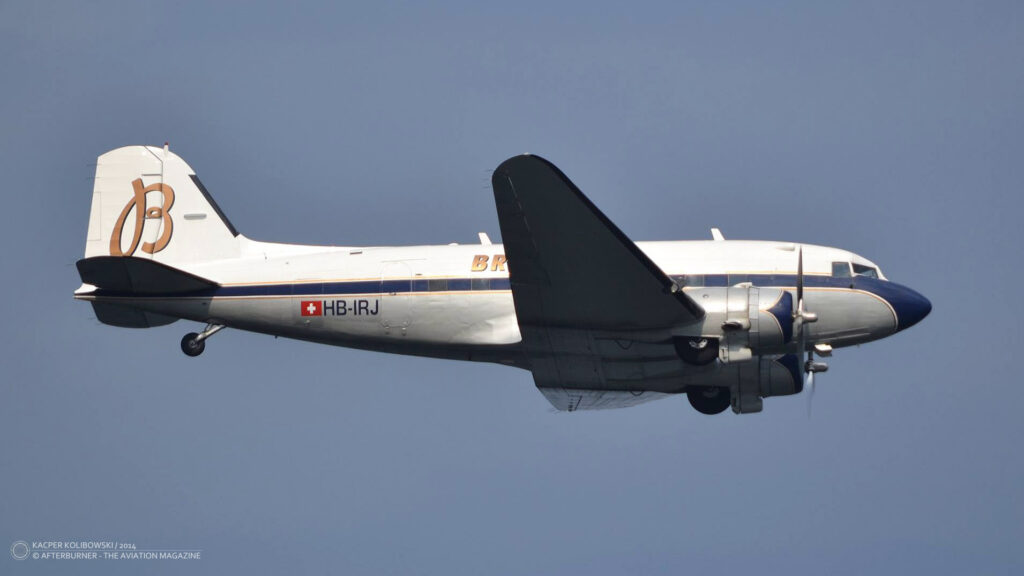 The story of the legendary aeroplane the DC-3 undoubtedly is, began in the first half of the 1930s. And it was a completely different aircraft that triggered its development. At that time United Airlines, one of the main American aviation carriers, began to introduce into its fleet a Boeing 247, modern and advanced passenger aircraft, intended for transcontinental flights.

The Boeing company, being the manufacturer of the 247, had stated that it would not sell their new passenger aeroplane to any other airline than UA, until the contract between them covering a delivery of 60 aircraft of that type  is completed. That statement, combined with the fact that eventually only 75 Boeing 247s were produced, made the contract between Boeing and UA virtually an exclusive one. Moreover, that left other airlines that were potentially interested in introducing a modern transcontinental passenger aeroplane into their fleets, without a worthy counterpart.

Faced with that situation, Transcontinental and Western Airlines – the then direct rival of the aforementioned UA on flights across the USA, contacted Donald Douglas, the founder of Douglas Aircraft Company. TWA asked him to develop an airliner with which they could continue to compete with UA on transcontinental routes.

Shortly thereafter, it was agreed that one of the previous designs of the Douglas Aircraft Company – designated DC-2 and developed in 1934 – was the perfect basis for creating the new, transcontinental airliner. At that time the DC-2 was already a proven and successful aeroplane, nevertheless still having potential for some improvements. The task of developing the new aircraft was entrusted to the DAC design team, led by Chief Engineer Arthur E. Raymond.

The new airframe was essentially a further development of the DC-2 design, therefore both airliners were very similar in appearance. Just like the predecessor, the new aeroplane was a low-wing aircraft of all-metal construction and had a retractable landing gear of a classic configuration with a tailwheel; was powered by two radial engines of 1,000 – 1,200 hp each (initially by Wright R-1820 Cyclone, then replaced by Pratt & Whitney R-1830 Twin Wasp) and was additionally equipped with a more modern radio-navigation equipment.

As the new aircraft was intended to operate primarily on long transcontinental routes, it had to offer adequately high comfort for its passengers. Therefore, and differently from the DC-2, the new aeroplane was slightly bigger, had longer wings, as well as extended and widened fuselage in order to be able to accommodate 14-16 side-by-side sleeping berths inside.

After nearly two years of development, the new airliner designated DST (an abbreviation of Douglas Sleeper Transport), was ready for test flights. The prototype performed its maiden flight exactly on 17th December 1935 – on the 32nd anniversary of the Wright brothers’ first flight – piloted by Carl Cover, Douglas Aircraft Company chief test pilot. The aircraft proved to perform satisfactorily and was approved for production.

Nevertheless, after a total of 7 DSTs were produced, it was eventually decided to replace the sleeping berths with 21 standard seats. Once re-equipped, the aircraft received the official designation DC-3 (DC for Douglas Commercial) and became the actual variant that went into serial production. Shortly afterwards the first examples of the new airliner were delivered to its introductory operator, the American Airlines.

The American Airlines inaugurated their DC-3 passenger service on 26th June 1936, assigning the new airliner to their flights from Newark, New Jersey and Chicago. Soon, also other North American carriers, including Delta Airlines, Eastern Air Lines, the aforementioned TWA, and even United Airlines, ordered together more than 400 DC-3s for their fleets. Back then, this aircraft revolutionised transcontinental air transport and popularised air travel in the USA. The DC-3 was able to cover routes between the East and West Coast of the country in between 15 to 18 hours, with just three stopovers, what was a really good result at the time.

The DC-3 was such a success that it began to be introduced to the European market yet in the same year of 1936. The first of many airlines from the old continent to receive aeroplane of this type was KLM Royal Dutch Airlines that acquired them as a replacement for their DC-2s. By the outbreak of the Second World War in Europe, the national carrier of the Netherlands had twenty three DC-3s in its inventory.

Following the outbreak of World War II, especially after joining the conflict by the USA, many of the civilian operated DC-3s were incorporated into military aviation and engaged in the Allied war effort. At that time, needs of the military became priority for any industry, including aviation. Since late 1941, numerous necessary changes and further modifications were applied to the already manufactured and newly produced DC-3 aircraft to have them adapted to military tasks. List of those changes included a cargo door, hoist attachment, reinforced floor, shortened tail cone with glider towing shackles, and an astro-dome for navigator, located on top of the fuselage. Also the military variant was equipped only with more powerful engines, the Pratt & Whitney R-1830 Twin Wasp.

Soon, the aircraft, in its military variant designated as C-47 Skytrain or C-53 Skytrooper (the latter being an early variant intended only for troops transport) became the primary war-time workhorse of military transport aviation first for the US and soon also for other Allied armies. In addition to the USAAF and US Navy Air Force (where the aeroplane was known as R4D), the list of military operators of the C-47 included the Royal Air Force (where the aircraft was commonly called ´Dakota´), the Royal Australian Air Force, the Royal New Zealand Air Force, the Royal Canadian Air Force, as well as Soviet Air Force. The Soviet Union both acquired some C-47s through lend-lease agreement and manufactured its own variant known as Lisunov Li-2, made under licence bought already in 1936.  The C-47s served on virtually every front of World War II, delivering equipment and supplies, taking part in the most famous airborne operations, dropping paratroopers and towing gliders, or transporting wounded soldiers.

After the end of the war, the requisitioned DC-3s were retired from military service and returned to flying in civil aviation, along with surplus examples of the C-47 aircraft. Nevertheless, times have changed and on longer routes they have had to give way to other, already much modern aircraft such as DC-4 or Lockheed Constellation. But the DC-3 still found use in many airlines and aviation companies around the world, carrying passengers on shorter flights, transporting cargo, or even used for fire-fighting purposes.

The examples that remained in military service after the Second World War have participated in several other conflicts that broke out over the next few decades. Those included the Indo-Pakistan War of 1947, where they served in the air forces of both countries and the Vietnam War, where several variants of the C-47 were used by US forces. Among them there was AC-47 Spooky, equipped with three rapid-firing 7.62mm calibre miniguns.

Until 1950, when production of the DC-3 aircraft was finally ended, a total of circa 10,174 examples were built, in over thirty different civil and military variants and conversions. Only about 607 of these were civilian DC-3s, while the rest represented different military versions. Additionally, the aircraft was produced under licence in Japan – by Showa and Nakajima, designated L2D – and, as mentioned earlier, in the Soviet Union.

The ´Dakotas´, as the aircraft is still usually referred today, have been used by civilian and military operators from around 100 countries worldwide. The aeroplane owed such extreme popularity to its robust and reliable construction, as well as – at that time – an exceptional performance, further yet improved by numerous versions and conversions of the aircraft developed within decades.

Nowadays, many of these aircraft can still be seen not only in museums, but also in the air. A number of them are in hands of aviation companies and private owners who keep them airworthy over the time. A certain number of DC-3s still continues to do what they were designed for, carrying passengers and freights in many remote parts of the world. Some of them, painted in the wartime colours, are presented at airshows and World War II related events, being the living memory of not only the dark years of the war, but also a time of glorious era of that great airliner.

The DC-3A, being the subject of this Photo of the Week column, was manufactured at the very beginning of 1940 with c/n 2204. And as early as 12th March of that year, after receiving registration number NC25658, it joined the American Airlines fleet as ‘Flagship Cleveland’, to carry  passengers over the North America for the next few years.

Like most aircraft of this type, with the outbreak of the World War II, that very DC-3 was incorporated into the USAAF. The aircraft was operated by military aviation between 4th April 1942 and 1st April 1944, serving on the European theatre of the conflict.

After the war, the aircraft returned to civil aviation. Over the years, it was owned by several different private operators all over the USA. In April of 2009, that DC-3 was bought for Super Constellation Flyers Association and transferred to Europe. After receiving a new livery, related to the SCFA and Breitling company (the main sponsor of the association), the aircraft was based in Geneva, Switzerland and has been a guest at many airshows and aviation events throughout Europe in the years that followed.

In 2014, the aircraft visited Poland on the occasion of one of the events from the Red Bull Air Race series, organised in Gdynia, on the coast of the Baltic Sea. And it was just then that this photo was taken.

Since 2019, following Breitling´s withdrawal from all aviation activities, that DC-3A was sold to a new owner, Turkish MSÖ Air and Space Museum in Sivrihisar, that – after giving her a new name of ‘Turkish Delight’ – keeps this classic airliner in airworthy condition.

The return of Rosinenbomber – 70th anniversary of the Berlin airlift.

On 26th June 1948, thirty-two C-47 transport aircraft took-off from the airfields located in the Allied occupation zones of Germany and headed for Berlin. Carrying 80 tonnes of cargo, including milk, flour and medicines, those […]