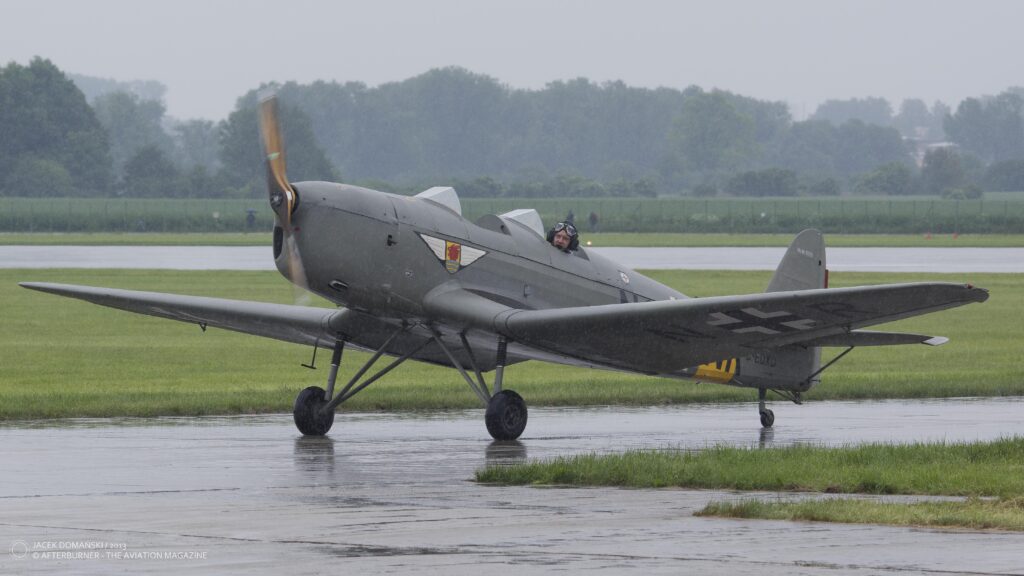 In the late 1920s, Leichtflugzeugbau Klemm GmbH developed a light sport and training monoplane aircraft, designated L 25 (later as Kl 25). The aeroplane was not only easy to assembly and maintenance but also had an exceptional performance characteristics, compared to then-common biplanes. No wonder that Klemm monoplane became very popular, with more than 600 examples built in Germany and approximately another 120 made in the United States.

Boosted by the success, the Klemm company launched works on a successor of the Kl 25. This time, the development was officially supported by the Reich´s Ministry of Aviation (Reichsluftfahrtministerium/ RLM) and therefore had to be in compliance with the RLM policy of reducing the use of strategic materials. As a consequence, a mixed construction (Gemischtbauweise) was implemented on the aeroplane – steel fuselage, wooden wings and tail were combined with a small, indispensable quantity of alloy.

Although initial works on the project began yet in 1934, the development of new training aircraft was officially authorized on 1st February 1935 with Friedrich Fecher assigned to the position of chief designer. According to some sources, the first prototype of the aeroplane – designated V1 – was ready just in February of 1935, performing a few test flights at the factory airfield.

In June of 1935, the prototype was delivered to German aviation test facility in Rechlin, for evaluation purposes. There, on 19th July, the V1 crashed during a test flight, killing the crew. A broken wing was the direct reason of that accident, nevertheless some suggestions appeared, unequivocally alluding to low material quality and wrong assembly.

There is no clear evidence about the exact way the Klemm factory handled that situation but soon thereafter the tests were continued, this time with V2, the second prototype. The evaluation was completed by March of 1936 and it seemed to be satisfactory enough that the RLM ordered an initial batch of twenty three aeroplanes. They had to be delivered between July and September of 1937.

The first serial variant of that aircraft was designated Kl 35A and was powered by Hirth HM 60R piston engine, generating 80 hp. The aeroplane was well received and further orders were placed yet at the end of 1936. Due to insufficient production capacity at the Klemm plant – that, apart from the Kl 35, was also producing Fw 58 and He 72 aircraft – manufacturing of the new Klemm monoplane was also assigned to Fieseler.

Eventually, a total number of ordered aeroplanes reached 1,386 examples, however it was never achieved. In March of 1938, Klemm and Fieseler reported that each factory was capable to complete not more than ten Kl 35s per month. In August of the same year, on the final delivery date, Klemm had only 40 completed aircraft (out of 313 ordered) and Fieseler another 21 (out of 142).

In November of 1939, production of the Kl 35 was transferred from Fieseler to Zlín aviation plant in former Czechoslovakia (now the Protectorate of Bohemia and Moravia). Nevertheless, initially planned number of the Kl 35 was also reduced in favour of another aircraft, Bü 181.

Eventually, the total number of Kl 35 aircraft built at all three factories together, reached 1,429 examples for the German market and additional 200 made for export. In Germany, the majority of aeroplanes was received by the Luftwaffe, with only about 60 sold to private owners.

The Klemm Kl 35 was a fully aerobatic aeroplane, used mostly as an advanced trainer. Apart from the Luftwaffe, the Kl 35 was used also in Norway, Sweden, Denmark, Hungary, Slovakia, Romania and Lithuania. Some of them remained in active service until the early 1950s.

Three main production versions of the aeroplane included the abovementioned Kl 35A, then B and D variants, both powered by a 105 hp Hirth engines – HM 504 and HM 500, respectively. The Kl 35D also featured a redeveloped landing gear. The Klemm Kl 35 could be built as either open or closed cockpit aircraft.

The Kl 35D pictured above was initially operated by the Swedish Air Force as Sk 15 / Fv 5050. After its retirement, the aeroplane was sold to a private owner and registered as SE-BGD. In the following years, that Klemm had changed ownership a few times, once spending some time in the United States.

Nowadays, the aircraft is a part of collection associated with Quax Flieger. The Kl 35D is currently painted as NQ+NR, a livery representing the Luftwaffe training aircraft from the era.

Generalmajor Hugo Sperrle was entrusted the command of Legion Condor, with the field command given to Oberstleutnant Wolfram von Richthofen. When a military coup of Spain took place on 17th July 1936, the country, divided […]