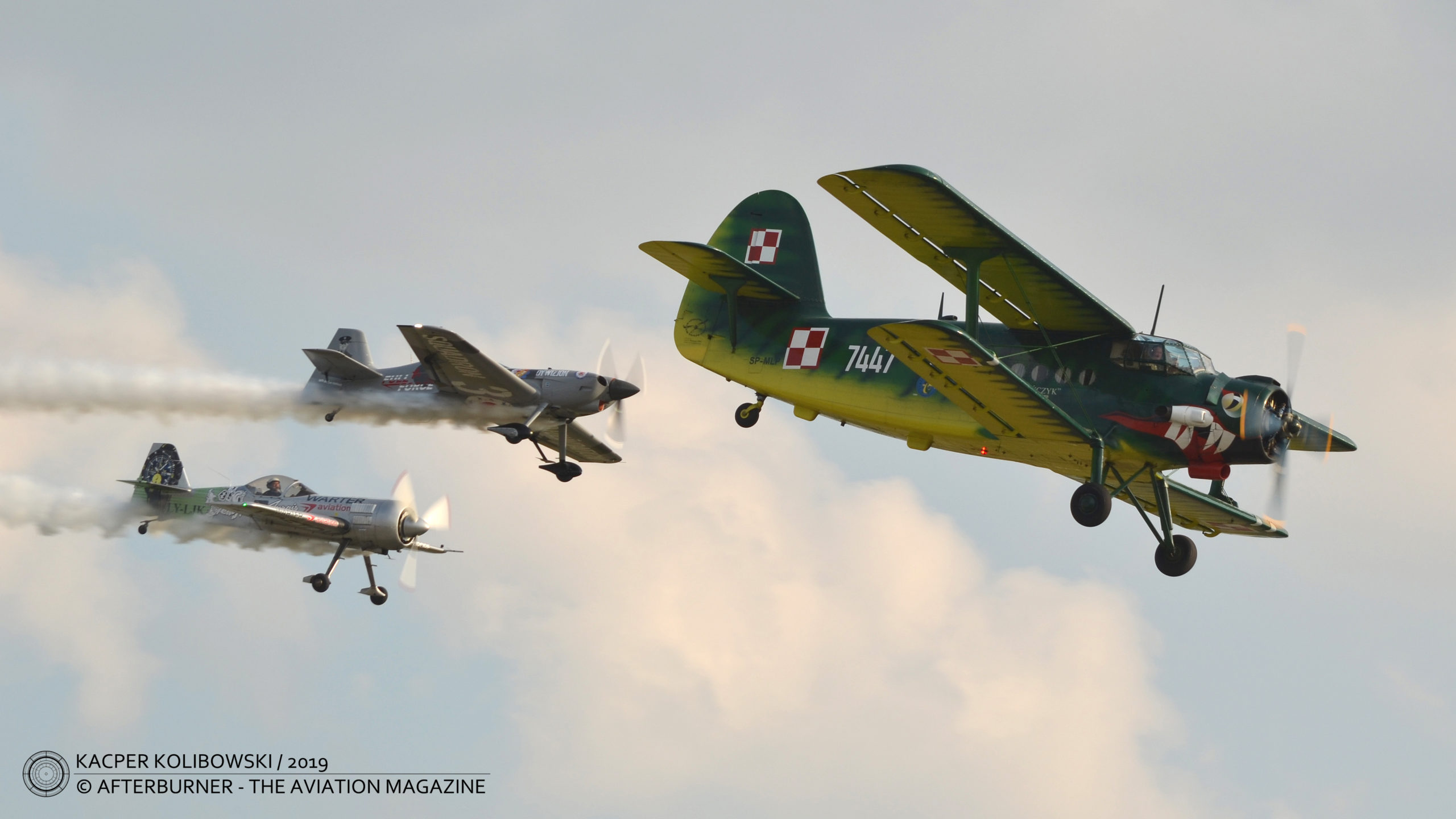 Antonov An-2TD ´Wiedeńczyk´, being tail chased by two aerobatic masters – Artur Kielak (Poland), in XtremeAir XA-41 and Jurgis Kairys (Lithuania), in Sukhoi Su-26. All aeroplanes are pictured while performing a joint display during the Central Air Show celebrating the 100th Anniversary of the Polish Aero Club, on 31st August 2019.

Through the 72 years of operational history, starting with the maiden flight performed on 31st August 1947, Antonov An-2 has proved its reliability and indispensability. The aircraft, which is currently the biggest biplane in the world, quickly gained affection not only by all of An-2 users, but also among the aviation enthusiasts and also aviation laymen. Among the countless nicknames this aeroplane got around the world, there are many related to its designation – Aнтошка, Aнтон or Aннушка in Russia, Antek in Poland, Andula in Czech Republic and Slovakia…

However, there are also many other existing nicknames, related to the performance, design and usual task of this aeroplane – Кукурузник (Russian) or kukuruźnik (Polish), meaning corn crop duster; сарай (a shed), because of its look and aerodynamics; or simply – таракан (a cockroach) due to its ability to fly everywhere and almost in any conditions. And indeed, even today some An-2s are still in use even in harsh arctic and desert regions of the world, perfectly doing their job, praised and appreciated by many pilots.

More than 18,000 An-2s were produced and in tens of different variants – starting from quite common passenger and cargo versions, through crop dusting, medical, fire-fighting to photometric ones. There were floatplanes, polar variants on skis and even a prototype of VTOL aircraft or ekranoplan based on An-2 airframe. The Antonov An-2 production plants were located in Soviet Union (Russia and Ukraine), Poland and China (manufactured under licence as Shijiazhuang Y-5).

Although there were four An-2 production sites, most of the aeroplanes manufactured after 1960 were produced in Poland by PZL Mielec factory (in cooperation with WSK Kalisz and WSK Rzeszów producing the engines and WSK Okęcie, manufacturing the agricultural equipment for An-2). During the long 42 years, the Polish production plant manufactured approximately 12,500 aircraft and 90% of them were then exported to the Soviet Union and all over the world.

Poland was one of the significant An-2 operators with 460 aircraft used for military and civilian purposes. Among the Polish military units flying Antonov An-2 was the 13th Transport Aviation Regiment in Cracow – the history of An-2TD ´Viennese´, featured in our Photo of the Week series, is related to this regiment.

An-2TD with the serial number 1G7447 was produced on 9th January 1967 and in the 13th Transport Aviation Regiment it received the tactical number 7447. The aircraft was performing its duty in the unit until April 1982, when two pilots from the 13th Regiment decided to escape from behind the iron curtain.

On 1st April 1982, in the middle of the martial law era in Poland, Jerzy Czerwiński and Andrzej Malec took off from the Kraków – Balice air base for the routine flight with the parachutists. The official flight plan included boarding them in nearby Czernichów, but instead, the families of both pilots were waiting there and embarked the Antonov ´7447´. The aircraft, with 9 people on board, took off and, flying at the very low level to avoid being detected by radars, headed to Czechoslovakia and then to Austria.

The brave and dangerous flight for freedom was successful – ´7447´ finally landed at Schwechat airport in Vienna, Austria. Both pilots and their families have been granted the political asylum and allowed to stay abroad, where they live until today. The aeroplane was returned to Poland, together with its flight engineer – the third member of An-2 crew, who wasn´t privy to the escape plan, decided to go back to his country.

After its return to Poland, ´7447´, now nicknamed ´Wiedeńczyk´ (Viennese), was still operated by the Polish Air Force until 2012. At the beginning of 2013 the aeroplane was donated to the Polish Aviation Museum in Cracow but fortunately it didn´t meet the fate of the static exhibit in the museum collection. Thanks to the AN-2 ´Wiedeńczyk´ Foundation, who took care of the aircraft, it was then renewed, received the new ´dragon livery´ – and today is still in airworthy condition.

Every year the former ´7447´ can be seen at many air shows in Poland, the Central Air Show in Rzeszów, at the celebration of the 100th Anniversary of the Polish Aero Club was just one of many. However, the flying display there was exceptional by the formation flight of An-2 ´Viennese´ with Artur Kielak and Jurgis Kairys, two famous aerobatic pilots.

An interesting fact is, that Antonov An-2 ´7447´ repeated its flight to Vienna on 14th June 2019, commemorating the successful escape and two brave pilots. They were on board of ´Viennese´ again, however, this time just as the passengers.