Czech Republic (and earlier Czechoslovakia) is the country with long aviation tradition, dating back to 1918, when the first aviation manufacturing company was established. Before the World War II, the Czechoslovak aviation industry was comparable to the level of the most advanced countries, as France, Germany or the Great Britain. This, exceptional for such a small country, achievement was continued after the war and also after the collapse of the Soviet bloc.

At the beginning of 1990s there were more than 10,000 people still employed in the aviation industry and nowadays there are approximately 70 aviation manufacturers registered in the Czech Republic, representing the entire range of the aerospace industry.

Comparing the number of the aviation companies to the number of inhabitants, the country is placed fourth in the world, just after the USA, the Great Britain and Germany. According to the official sources, more than 60 types of aircraft are now produced in the Czech Republic – the most of them being, however, only the small ultralight aircraft.

Already since the mid-nineties, several manufacturers made their attempts to hit the market with new ´Czech made´ product – an aircraft that would be produced in the Czech Republic, developed by the Czech manufacturer, or at least as a part of the joint-venture project, and sold to both domestic and international customers; an aircraft, that would be the flagship of the modern Czech aviation industry. 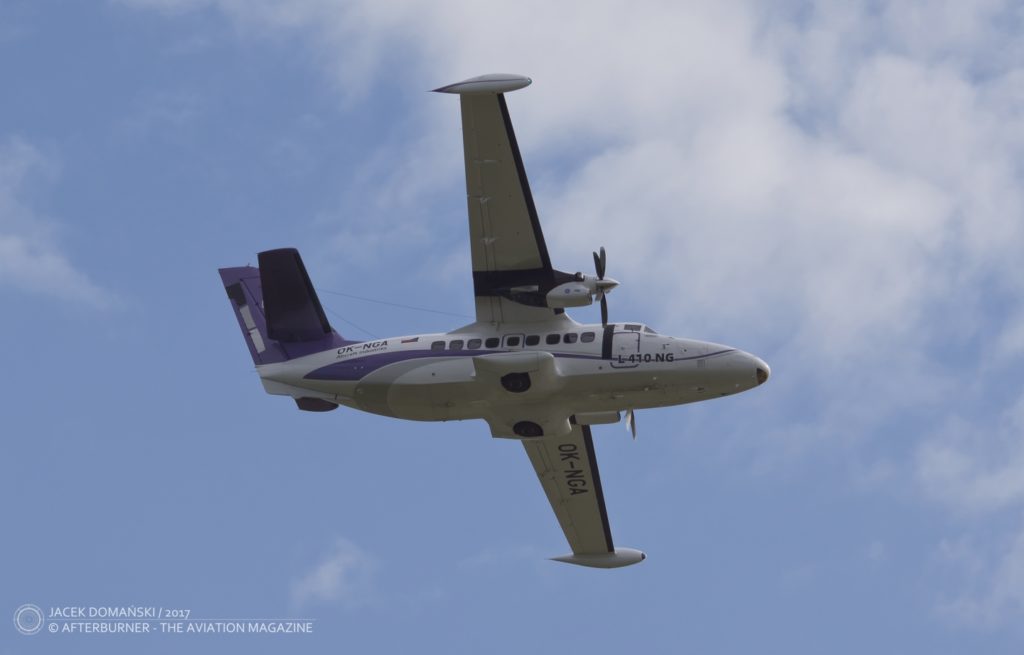 Unfortunately, the majority of those projects were cancelled sooner or later, despite all the initial efforts and the resources invested.

One of such projects started in 1998, when the Ayres Corporation from Albany (Georgia, USA) acquired Let Kunovice – at that time one of the most-known domestic aviation manufacturers. The Let company was established in 1936, then nationalised after the World War II and manufactured several successful aircraft, as C-11 trainer, L-200 Morava or L-410 Turbolet.

Ayres, at the beginning, was just the distributor of the agricultural aeroplanes, but in 1977 the company bought a local branch of Rockwell International and started to manufacture its own agricultural aircraft. In 1996 Ayres began an ambitious project of developing a small cargo aeroplane for Federal Express – Ayres LM200 Loadmaster.

The aircraft, with the capacity of almost 4,000 kg of freight and the 8,620 kg of the take-off weight, had to be powered by two Pratt & Whitney Canada PT6D-114 engines, driving a single five-bladed Hamilton-Standard propeller through a combining gearbox. However, according to the FedEx engineers, this wasn´t enough for such aircraft and FedEx forced Ayres to use LHTEC CTP800-4T power unit (made of two CTP800s engines, the same as were intended for ´stealth´ helicopter RAH-66 Comanche). Finally, three variants had to be produced: cargo aircraft, 34-passenger local airliner and the combined variant.

In order to reduce costs, Ayres was looking for the outside-US site to develop and then manufacture its future aeroplane, Let Kunovice was the company that met all Ayres´ needs.

Nevertheless, the development process was very slow, and it finally it become obvious, that creating the completely new aircraft from the scratch was beyond the capabilities of Ayres. Even the pre-order for 75 first aircraft, already placed by Fed-Ex, cannot save this project and finally, in 2001, Ayres Corporation went bankrupt, taking Let Kunovice with it. The abandoned and bankrupt Let was then bought by Moravan Otrokovice and turned into Letecké Závody company.

Around the same time Ayres was already ceasing its activities, Raven 257 – a light utility twin-prop transport aircraft was introduced, being the result of another international cooperation. The project itself started sometime between 1995 and 1997 in Belgium, by the company named Wolfsberg Aircraft.

Similarly as in the Loadmaster case, the Czech Republic was chosen for the final development works. In 1999, the joint company Wolfsberg-Evektor was established, with the participation of two Czech companies – Letov Air and Evektor-Aerotechnik – and GAIC from China.

The information on this aircraft is, unfortunately, sparse. At the time of its development, Raven 257 was presented as the possible replacement for Britten-Norman Islander utility aircraft. The prototype disclosed a rather small aircraft, according to the manufacturer´s description designed for hard operational conditions and able to carry 10 passengers or cargo. The first prototype made its maiden flight in 2000 but only four months later the development works were ceased, and the partnership cancelled.

Another attempt was made in 2003, by another joint-venture, at that time named Wolfsberg Letecká Tovarna. Another, second prototype was manufactured and under the new designation ´Corvus 1´ it made the maiden flight in 2006. And as before, the programme was cancelled shortly after. The remains of Corvus 1 could be now found in the private aviation museum in Koněšín (Czech Republic), the first prototype disappeared without a trace somewhere on its way to Africa. 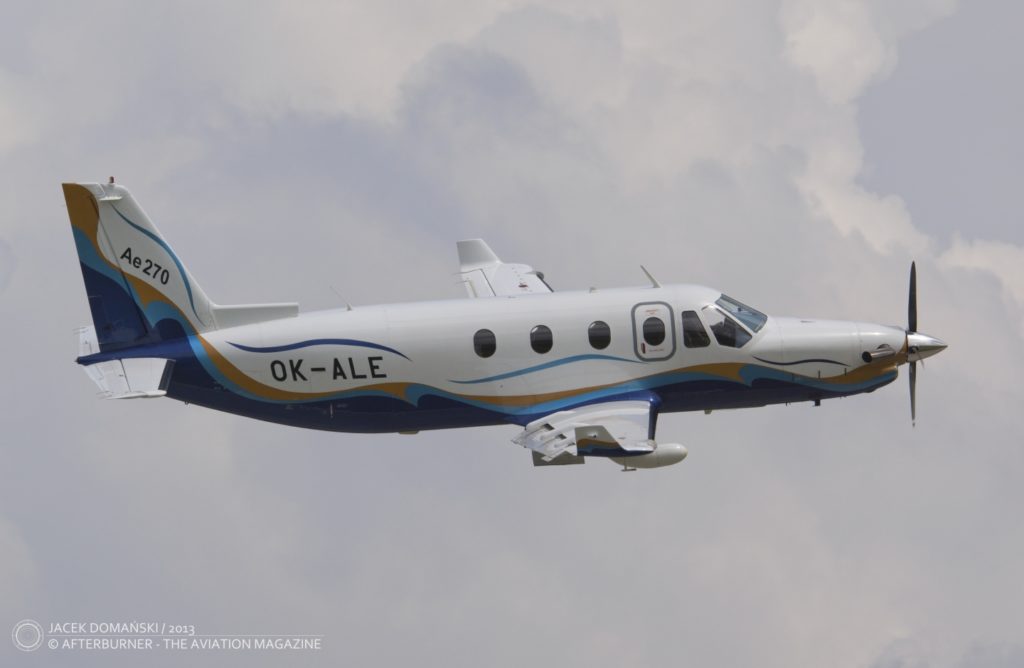 The state-owned company Aero Vodochody – one of the oldest Czech aviation manufacturers, established yet in 1919 – was also trying to adopt in the new market conditions. Already in 1997, the IBIS Aerospace Limited was founded, a joint-venture company of Aero and Aerospace Industrial Development Corporation (Taiwan).

The purpose of this cooperation was Aero Ae 270 Ibis – the single-engine turboprop general utility aircraft. Developed at the same time as the two aforementioned projects, Ae 270 project was far more advanced. Five prototypes were made for the purposes of static, fatigue and flying tests. The maiden flight was performed in 2000 and the aircraft was already successfully certified by EASA (2005) and FAA (2006).

This was, however, the final stage of the Ibis development. Firstly, the Taiwanese partner (intended to be wing-manufacturer for the new aircraft) announced the change of its interest from civil to military aviation. Then the problems with the financial resources came and finally there were changes in the Aero Vodochody management. In the end, no production followed, and the project was abandoned.

After several contradictory rumours about the future of the Ibis programme, it was officially disclosed in 2016 that the project was sold to Nigerian company COPS Investment. The acquisition of Ae 270 included the transfer of all Intellectual Property and Rights, along with the EASA and FAA Type Certificates and the hardware. COPS intended to manufacture and sale the new aircraft through its subsidiary Aircraft Integrated Solutions, under the new designation AIS Spirit. However, the last update of the company web site is dated 2017, and in the ´news´ section only two information could be found – both are from 2016 and illustrated with the Aero-manufactured prototype. 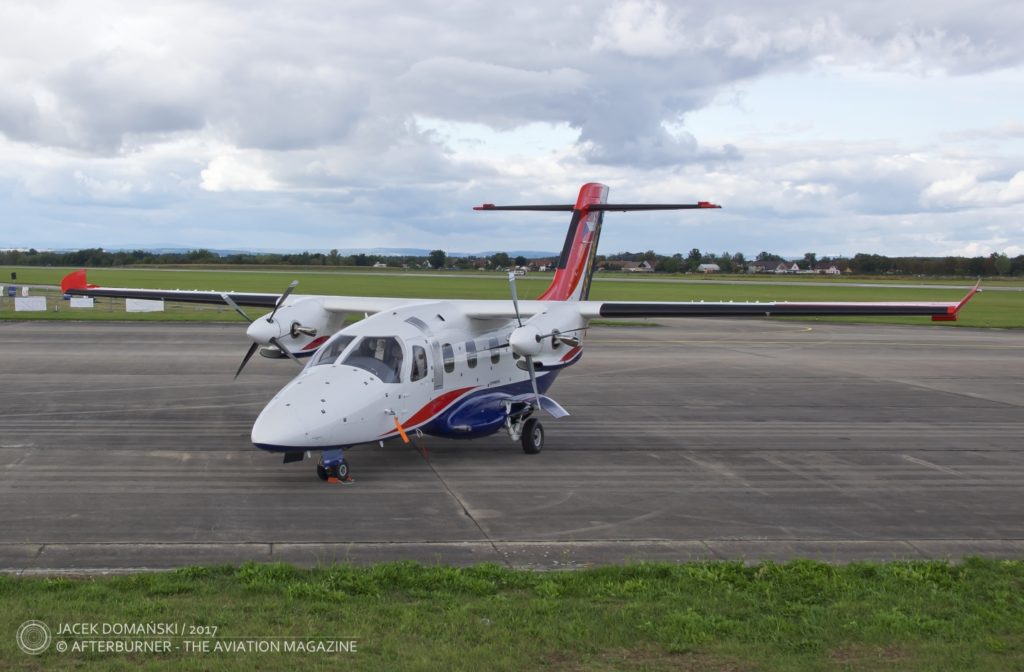 In 2003, another interesting and promising project was launched, the turboprop utility aircraft developed by Evektor company, already mentioned above, as one of the Raven programme participants. Through its aviation branch, Evektor-Aerotechnik, the company is the successful light and sport aircraft manufacturer, with 1,400 aeroplanes produced since 1996.

The company decision to enter the market of utility aircraft launched the EV-55 Outback project, a twin-engine turboprop aircraft able to carry 9 passengers or 1776 kg of cargo (the 14-passenger configuration is also possible, for the countries where it is allowed by the local regulations). Additionally, the combined passenger + cargo variants are also available.

The aircraft silhouette is somehow reminding the Let L-410, but scaled down, and there is no surprise there, as EV-55 was developed in Kunovice – the same location where L-410 is manufactured by now Aircraft Industries (formerly Let Kunovice). There is no cliché in saying that some designs are timeless, and the general concept of L-410 is one of the best examples.

Certainly, the general look of the aircraft is the only similarity, and EV-55 is not just a smaller copy of L-410. According to the manufacturer´s specification, the Evektor EV-55 Outback is a versatile, all-weather aircraft, able to operate in low/high temperatures, high altitude airports and unpaved or sodden runways. The aeroplane is powered by two Pratt & Whitney PT6A-21 engines, with 535 hp each, has a full glass cockpit and unpressurized cabin.

The aircraft was advertised as a future direct competitor to Cessna 208 Caravan and additionally offered as solution for those operators who are considering the replacement for already ageing Cessna 421, Britten-Norman Islander and similar size aeroplanes. According to the marketing research done by Evektor, more than 5,000 of such utility aircraft would need to be replaced in the upcoming years.

Apart from the Evektor itself, in the development of EV-55, the association of the Czech aviation manufacturers (Asociace leteckých výrobců ČR) was also involved, with 19 further aviation companies participating in this project. The initial plans envisaged the first aircraft would be delivered in 2014, with the estimated unit price of 2 million USD (later in 2017, the updated price estimations were 4 million USD per aircraft). 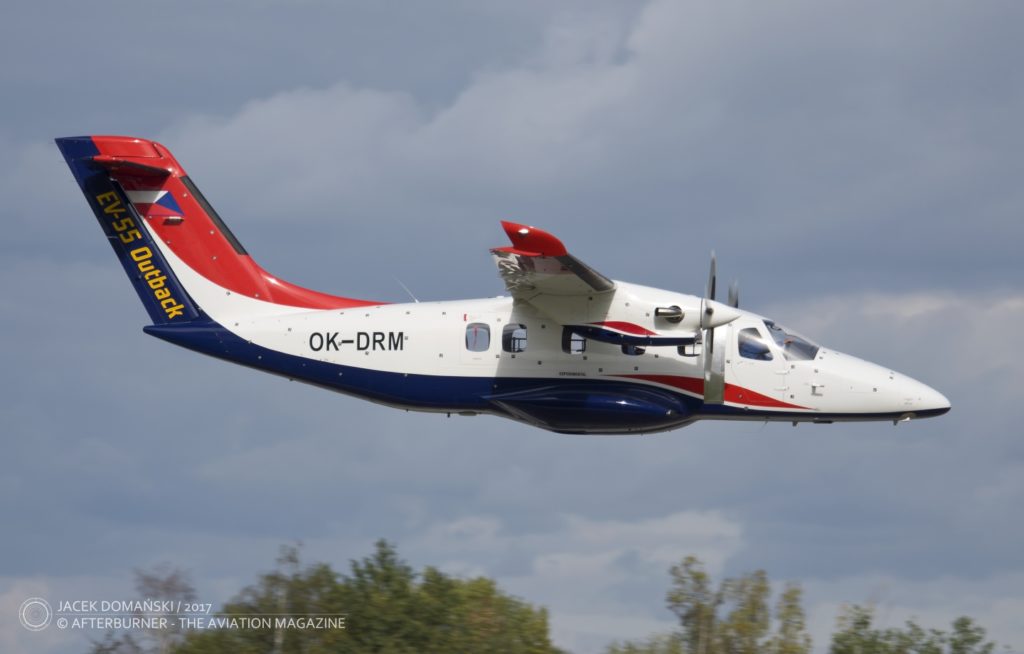 Two prototypes were made and the maiden flight of EV-55 Outback was performed in June 2011. However, it soon turned out that the EASA certification process, which finally started in November 2014, was more complicated and expensive, than expected. In result, the project was suspended and Evektor began to search for the strategic investor, necessary for completing the certification.

Finally, the partnership agreement was signed with the Malaysian company Aspirasi Pertiwi SDN BHD and the new investor was promising to launch the financial support of approximately 200 million USD, ensuring the EASA certification to be completed in 2017. Unfortunately, this did not happen. According to the Czech company, shortly after the conclusion of the aforementioned agreement, the Malaysian partner had suspended the funding.

Following the lack of funds, the EV-55 project was suspended again in 2017, without finalizing the certification procedure. Additionally, the relationship between the Czech company and its Malaysian partner is still not entirely clear and Evector already asked the Czech government for the assistance in solving this issue. And on the top of that, in December 2018 the company was required to return 60 million CZK to the state because the conditions of the received grant were not observed (the Outback project was also partially financed by the Czech government, through the subsidy programme).

Currently, the EV-55 project is suspended for indefinite duration. There were, however, some rumours circling the aviation-related media, saying the certification process at EASA should be continued (and even finalized) this year, but those rumours were never confirmed officially. On the Evektor company web site, the most recent information regarding the EV-55 is still dated March 2017 and informing about the suspension of this aircraft development.

Breitling Jet Team – the end of the story