For nearly three decades, on every odd year, the aeroclub airfield in Roudnice nad Labem – a small city located approximately 35 kilometres north-east from Prague – is filled with interesting aircraft and attracts tens of thousands visitors. All this because of Memorial Air Show (MAS), the air show event organized there, and which 15th edition was held on 22nd and 23rd June 2019.

The first air show in Roudnice, that took place in 1991, shortly after the Velvet Revolution, was organized there in honour of Czechoslovak pilots in the Royal Air Force, during the World War II era – those, who fought for freedom, but, when they returned to then Czechoslovakia after the war, were discredited, persecuted and even imprisoned by socialist government. This air show had to be, in some way, a rehabilitation of these mistreated heroes of the sky.

This initial idea turned into regular event, leaving its mark on future editions. Until today, each edition of MAS is organized with the guiding theme related to the fight for freedom, or freedom itself, honouring bravery and dedication of those, who did their duty.

The 15th edition was no exception and was organized with the headline celebrating the 75th anniversary of the D-Day. Certainly, such a guiding theme means that among participating aircraft, the significant part would be represented by the World War II era aeroplanes. 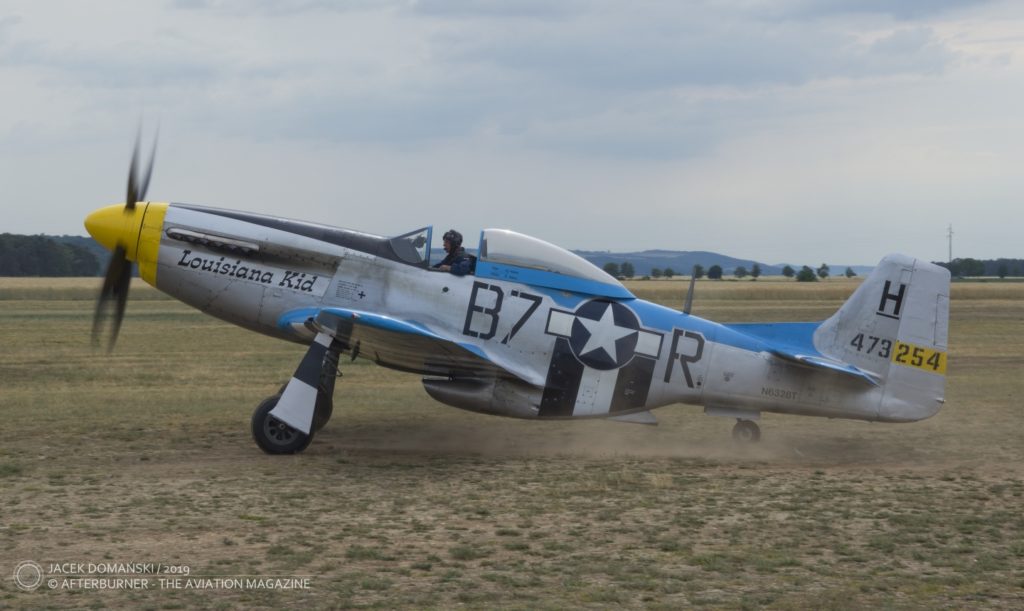 Memorial Air Show is organized at the weekend, with similar flying programme both days and Saturday being usually the peak day, regarding the visitors. The 2019 edition was, additionally, associated with the 70th anniversary of paper manufacturing plant in Štětí, a town located just a few kilometres away from Roudnice, where the biggest paper factory in the Czech Republic is located. Mondi Group, the owner of the factory, was the main sponsor of MAS 2019, at this opportunity organizing also the private party for its employees at the airfield.

Concert of ´Mandrage´ pop group was another novelty of the 15th edition, added presumably to attract more visitors from general public. However, unlike the other aviation events that are bringing together the flying displays and musical performance, ´Mandrage´ was playing before the flying programme of Memorial Air Show.

As every year, MAS 2019 offered an impressive list of participants, especially for the aeroclub-organized air show. At the beginning, two iconic World War II fighters should be mentioned – P-51D Mustang and Supermarine Spitfire Mk.XVIE, both marked with the D-Day stripes, according to the air show headline. Another two rare warbirds came from Hangar 7 in Salzburg and they were P-38 Lightning and F4U-4 Corsair from the Flying Bulls collection, the only airworthy aeroplanes of their type in Europe. 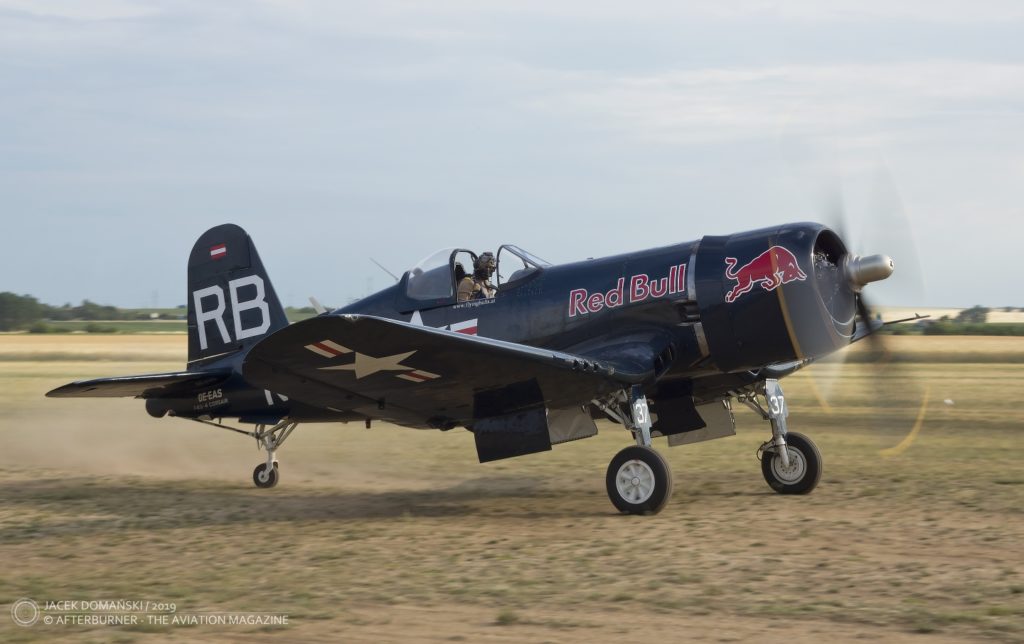 Then there were two aeroplanes with their roots into the World War II, even though both were manufactured in post-war years. A recently restored C-11 (Czechoslovak-manufactured license copy of Yak-11) training aircraft from 1950s, but developed from the famous Yak-3 fighter, and Lisunov Li-2 (Soviet license-manufactured DC-3) from 1949, in an airliner variant.

Those two aircraft, representing already the Cold War years, were supported by a few other aeroplanes from the era, as North American Rockwell OV-10B Bronco, an aircraft that became famous in the Vietnam War and was operationally used even in the 21st century; Yak-18T training aircraft, developed in the Soviet Union in 1960 for the purpose of airline pilot training; and Dornier Do 28D Skyservant, a light utility STOL aircraft from 1960s.

Even the aeroclub organized air show should have some flying displays performed by the modern military aircraft and at MAS they are usually done by the Czech Air Force display teams. For both days, the flypast of JAS-39C Gripen was initially planned, however it was cancelled on Saturday as both Gripens that were going to appear over Roudnice had to be deployed to Slovakia. They returned on the next day, and those who came to the event on Sunday could watch the pair of Czech Air Force jet fighters in their flypast.

Instead of Gripens, two L-159 ALCA attack-aircraft appeared over the airfield on Saturday, performing the attractive and dynamic show with simulation of real attack on the ground target. This simulation was performed so well, that it caused another, behind-schedule display of the fire brigade, when a dry grain growing area next to the runway caught fire.

Czech Air Force sent also its transport aeroplane, Spanish-manufactured CASA C-295, to Roudnice, presenting it to the spectators in a few passes over the airfield. 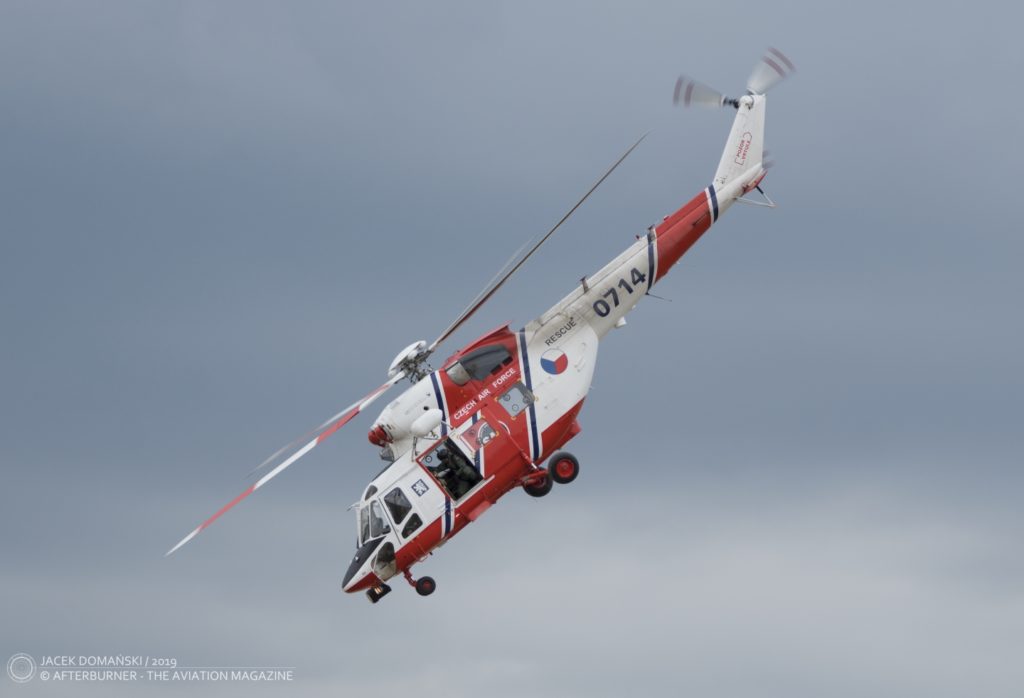 And last, but surely not least, participant from Czech Air Force inventory was PZL W-3A Sokół helicopter which performed an interesting SAR display. This helicopter was also, due to the obvious limits of the aeroclub airfield, the only Czech Air Force aircraft available at the static display.

Aerobatic displays are among the most loved by the air show visitors and the Memorial Air Show programme obviously could not skip them. It all began with an aerobatic show of a small aerobatic biplane, Christen Eagle II, a direct competitor of more popular Pitts Special. This display was shortly followed by the pilot being adored by Czech spectators, Red Bull Air Race champion of 2018 and the aerobatic master, Martin Šonka, who performed a breath-taking show with his Extra 300SR.

Much calmer and relaxing, but absolutely not less attracting, were glider aerobatic displays. The Blanix Team performed a pair display, flying two L-13 gliders. Next, Miloš Ramert was flying his solo display with another Blaník, and finally there was an unusual stunt of parachute jump from the wing of L-13 Blaník glider.

Much calmer and relaxing, but absolutely not less attracting were the glider aerobatic displays – Blanix Team flying the pair of L-13 gliders, Miloš Ramert solo display and parachute jump off the wing of L-13 Blaník.

Parachute jumping are usually among the fixed points of MAS programme, with 15th edition being no exception. Apart from the above mentioned stunt with jumping from L-13 glider, the parachutists officially opened the event, performing the jump with the Czech national flag, and additionally had also their own display during the day. And it is worth mentioning here, that the parachutists were air-lifted by Antonov An-2, another iconic aircraft of the Cold War era. 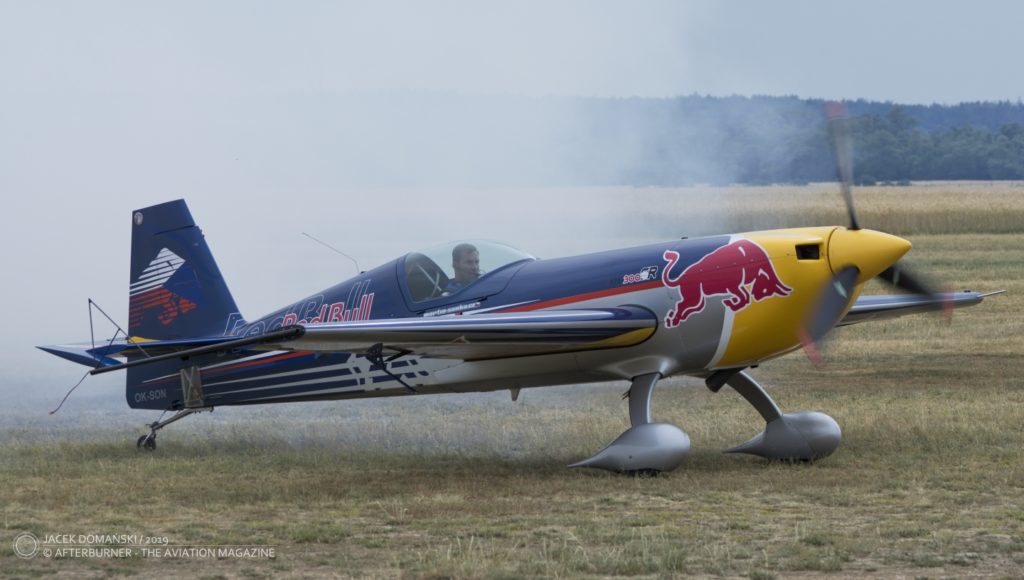 Apart from the mentioned W-3A, two other helicopter displays were also included in the flying programme. The first of them was a pair performance of two Robinson R44 rotorcraft, and a group flypast of 12 Robinsons R22 and R44 being one of the final points of the flying display schedule

Concluding the list of Memorial Air Show 2019 participants, Lockheed Electra 10A must be mentioned. This beautiful all-metal small airliner from 1930s is a kind of jewel among Czech airworthy historical aircraft – the aeroplane OK-CTB was owned between 1937 and 1939 by Jan Baťa, a famous Czech entrepreneur. Almost seventy years later, the aircraft was located in the USA, bought by contemporary entrepreneur Ivo Lukačovič in 2009, restored to the airworthy condition and returned to the Czech Republic in 2015. Since then, the silver Electra is from time to time participating in the local aviation events – being currently one of only two reported Electras in flying condition.

The final point of the flying programme on Saturday and Sunday was the BALBO flight, a joint flypast of all historical aeroplanes participating in the air show – an amazing experience for all who were there and could hear the beautiful sound of those old engines playing in unison.

As usual, most of the participating aircraft were available during the whole air show day at the static display. In addition, the sightseeing flights were organized, and in addition to the usual helicopter flights in Robinson R22/R44, during MAS 2019 there was a possibility of sightseeing flight onboard of the only airworthy Li-2 and Do 28.

The opportunity to fly over the picturesque countryside around Roudnice, including the nearby medieval castles, legendary Říp Mountain or Terezin fortress, was used by dozens of air show visitors. It was, judging by the all-day lasting, long queue waiting near the parking position of Li-2 and Do 28, one of the highlights of the air show. 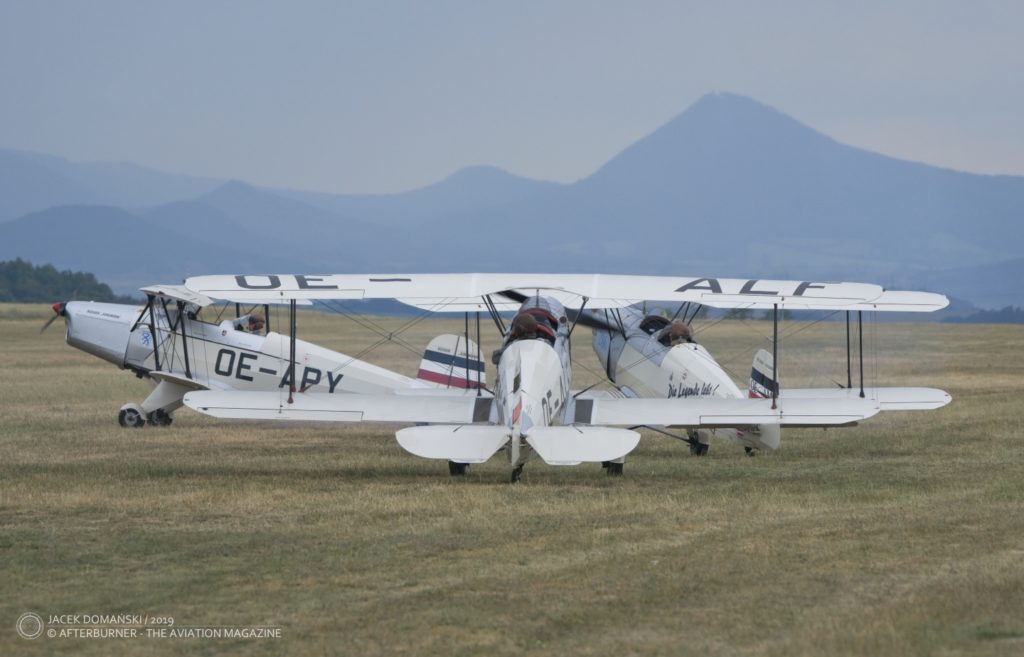 One of the air show advantages this year was opening the flying displays at 2 p.m. – Roudnice airfield has the visitors´ zone located against the sun and the afternoon displays partially solved this inconvenience. However, this year the weather was playing a different game. May and June were mostly dry and hot, and the usually green runway was not green anymore – just a few tufts of yellowed grass and a dust flying in the air with every movement on the runway.

Surprisingly, the air show weekend was rainy, there were several thunderstorms and showers around the airfield but not in Roudnice, just with a few, hardly noticeable, raindrops in the morning. The dark clouds circling around the airfield filtered the sunshine, giving the strange cast to its scenery – which was changing from blue to orange colour during the day. And, as usually, the sun came out at the end of the show.

Summing it up, the 15th edition of Memorial Air Show was a successful event, offering any aviation enthusiast a nice review of the historical aircraft, with addition of some modern designs and aerobatic displays. Especially, the possibility to fly on board of Li-2 must be highlighted, as this was an exceptional experience.

Unlike the air shows organized at the airports or active military bases, Roudnice offered more realistic environment for the warbirds and other historical aeroplanes, as they were taking-off, landing and taxiing on the grass runway and taxiways. There is no concrete runway there, often spoiling the overall impression. 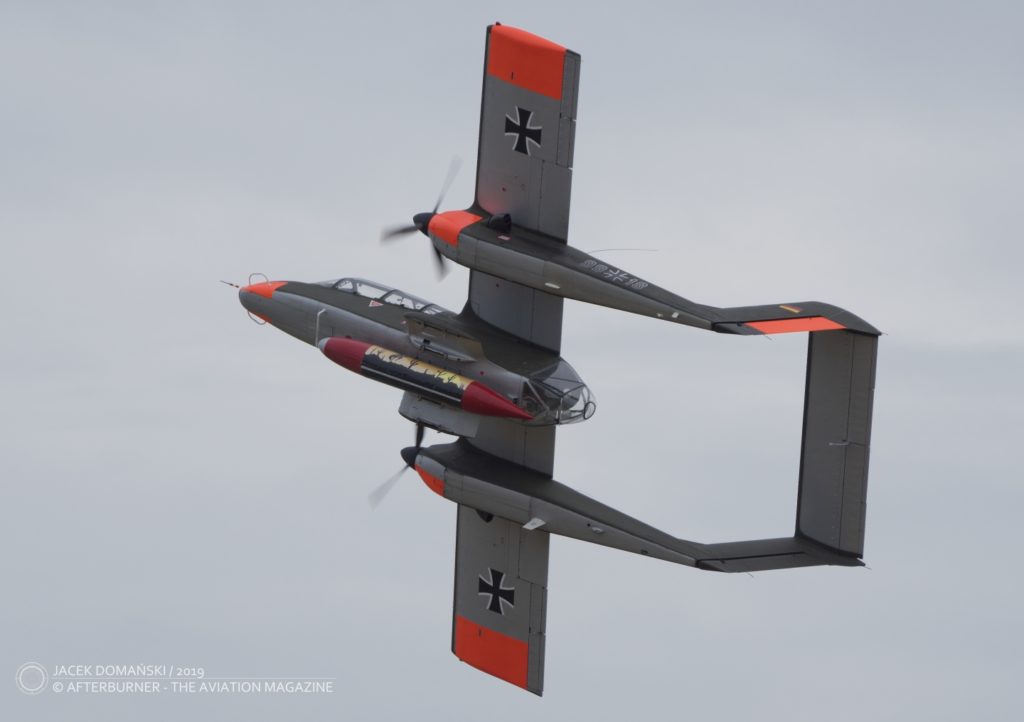 The organizers of MAS are calling their air show ´a family-welcome event´ and there is no exaggeration it this, as not only the aviation fans were able to find something interesting in Roudnice. In addition to the flying and static displays there was a popular pop band signing, the reenactors were showing their collections and restored equipment, there was a Czech Army exhibition with modern army equipment and, for the youngest visitor, a playground.

Memorial Air Show 2019 was visited by approximately 20,000 spectators. The organizers are already looking forward to 16th edition, scheduled for 2021 – and it would be organized exactly 30 years from the first air show at Roudnice. Thirty years is an impressive record for an aeroclub-organized air show, which now is welcoming its third generation of participants and visitors.