On March 25th there was a 48th anniversary of the first flight of Ilyushin Il-76, the multi-purpose strategic airlifter, designed and produced in the former Soviet Union.

During those 47 years Il-76 has become one of the icon aircraft, inseparable connected with the late 20th century military conflicts, natural disasters, humanitarian aid and several custom airlift operations. Almost 1000 of Il-76s were already built and this airlifter was operated by civilian companies and air forces of 38 countries, with certainly Soviet Union (and nowadays Russia) as the main user.

The story of Il-76 started on 28 June 1966 when Ministry of the Aviation Industry of the Soviet Union (Минавиапром СССР) ordered the Ilyushin design bureau to begin works on the new cargo and passenger aircraft, intended as the replacement of Antonov An-12. The team working on the new project was led by Gienrich Vasilyevich Novozhilov, the model of the future strategic airlifter was approved in 1969 and the prototype performed the first flight on 25th March 1971.

The project was made following the Минавиапром requirements of carrying up to 40 tonnes of cargo for 5000 kilometres, able to operate from short and unprepared airstrips, and capable of operate in any possible conditions, including the Arctic weather. During the development process the initial plans to build the passenger version were abandoned and the cargo airplane became the main goal of the construction team. 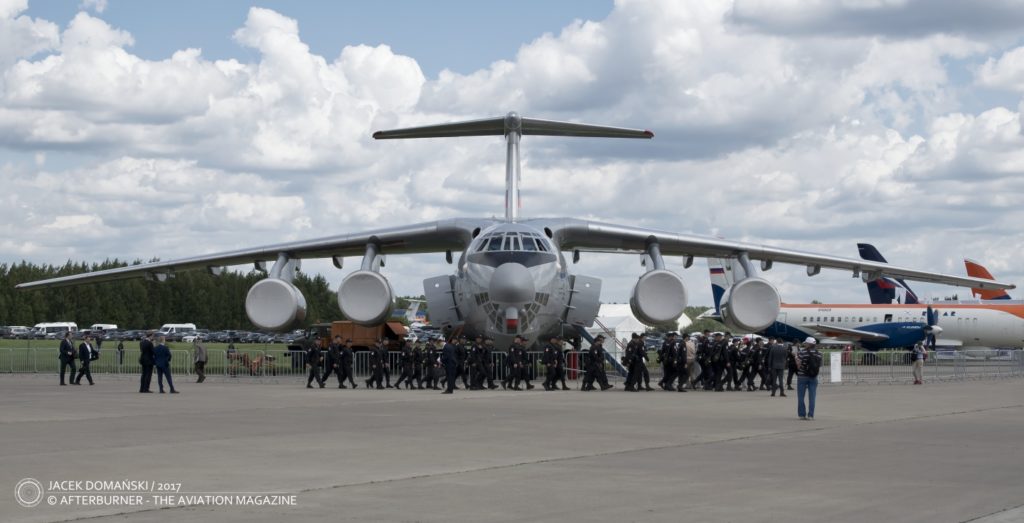 Il-76 was for the first time presented to the public in May 1971, during the Le Bourget aviation salon, but the Soviet Air Forces had to wait until May 1973 to receive the first new Ilyushin cargo aircraft from the serial production. On the other side of the Iron Curtain the new Ilyushin airplane received the NATO code name ´Candid´.

Ilyushin Il-76 was the first Soviet turbofan-powered transport aircraft. The four D-30KP-1 (later D-30KP-2) engines constructed by Soloviev Design Bureau allowed the Il-76 to fly with the speed range 260-850 km/h, that secured both the fast cruising speed and the slow flight needed for the parachuting operations. The aircraft was able to carry 28-60 tonnes of cargo, with the respective range of 3600-4200 km, the cargo area could be converted for the troop transport purposes, allowing to transport 145-225 troops or 126 airborne troops with their equipment. 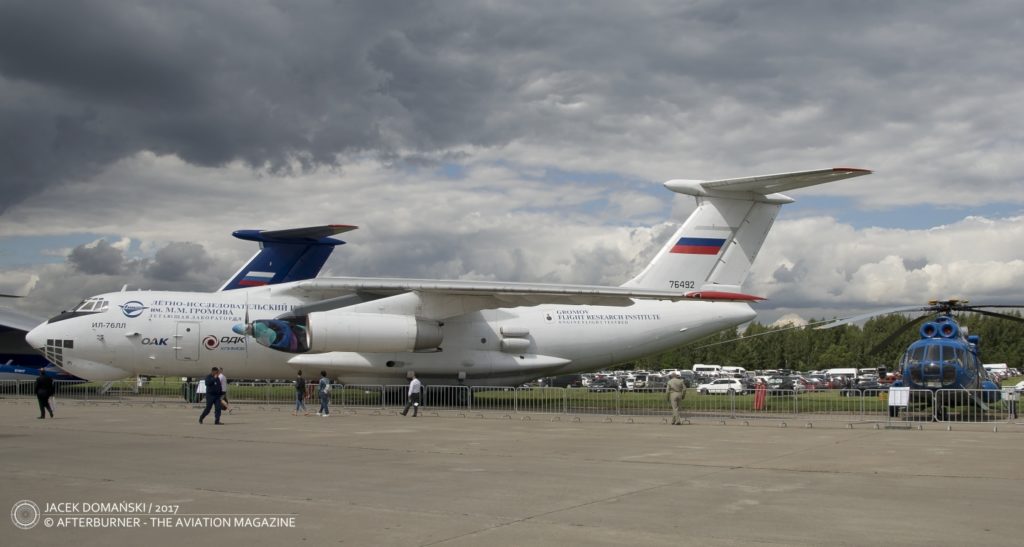 The Il-76s were the main cargo aircraft used during the Afghanistan conflict (1979-1989), it is reported that 89% Soviet military personnel (786,200 servicemen) and 74% of the cargo load (315,800 tonnes) were transported by Il-76s. The number of flights performed for the purposes of the Soviet-Afghan war reached 14,700 – 55% of the total transport flights performed. During the 80s and 90s the ´Candids´ were the main aircraft operated by the Soviet air transport units (VTA – Военно-транспортная Авиация), at the time of the Soviet Union collapse in 1991 they represented 69% of the total number of VTA aircraft and were performing 70% airlift tasks. The Ilyushin Il-76s were also used for the civilian purposes since 1976, when first airplanes were received by Aeroflot.

Il-76MD-90A used as a testbed airplane for the special operations airlifter, equipped with advanced “President-C” defence system, opto-electronic station mounted on the lower nose section, modernized navigation system and low-level flying systems, and stealth technology, according to some sources (MAKS-2017)

In the 1990s many of the existing Il-76s were modernized to the Il-76MD-90A standard, receiving the different variants of new PS-90 engines. This modernization was forced by the more restricted European noise limits and thanks to the PS-90 engines not only the noise level was reduced, but also the overall Il-76 performance and flight economy were improved. 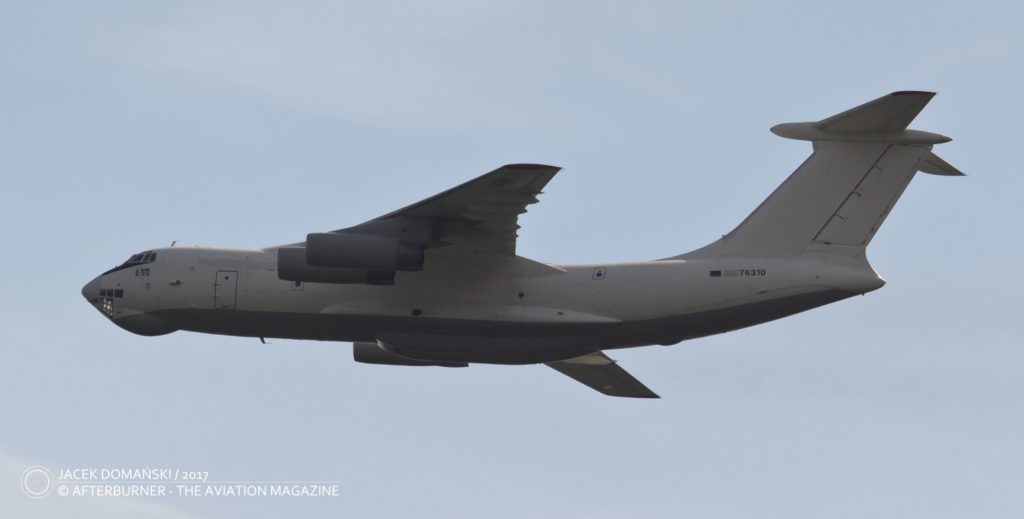 There are around 40 variants, modifications and Il-76-based developments existing, among them there are aerial refuelling tanker (Il-78), fire bomber, telemetry and communications relay aircraft, electronic intelligence aircraft, special variants to operate in the heaviest Arctic conditions, mobile hospital and many others. The Il-76s are also used as the testbed aircraft, from testing the new aircraft engines to the new laser weapon tests. With the Il-76MDK ´Cosmos´ modification there is a possibility to perform the weightlessness cosmonaut trainings. 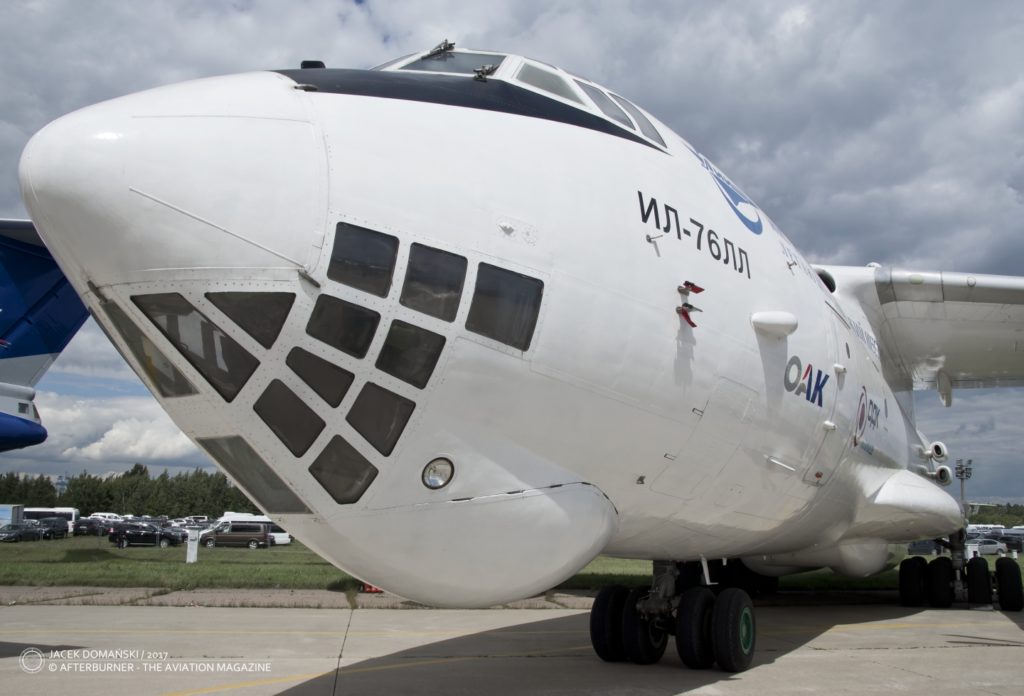 The early military variants were carrying two 23 mm cannons for the aircraft self-protection, located at the tail base. The cannons were operated by the tail gunner, using the radar detection. In several of the currently operated aircraft the cannons were removed, and flare dispensers are the main self-defence equipment. Some military variants of Il-76 were also capable to carry 500 kg bombs with their hardpoints located under each of the outer wings. 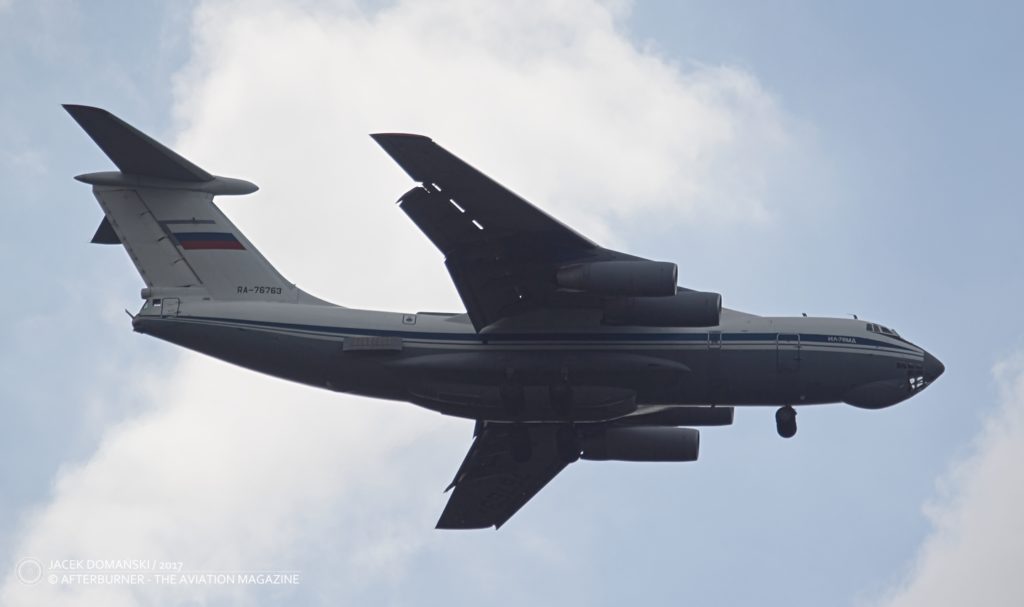 Il-76MD approaching the Chkalovsky Airport – despite its civil registration identifier this aircraft is equipped with the tail cannons and additional flare dispensers and was used in several military operations, including the recent Russian Air Force deployment in Syria

Due to Il-76 designation the airplane was used during the several armed conflicts and crisis situations since the 1980s until today. Several aircraft were destroyed or even shot down, the numbers vary depending on the source, but the estimated number of Il-76s lost due to combat reasons already reached 25, further 45 aircraft were lost in accidents. The most known combat loses include the Transaviaexport operated Il-76 shot down by the anti-aircraft missile in Mogadishu (Somalia) in 2007 and the Ukrainian Air Force Il-76 shot down by ground fire from pro-Russian separatists at Luhansk airport. In 1995 the Airstan operated Il-76 with the Russian crew onboard was forced down by a Taliban MiG-21 fighter and landed at Kandahar airfield. The crew was held prisoners over the year and finally they managed to take over their aircraft and escape (the crew has released the book ´Escape from Kandahar´ in 2001, then in 2015 the movie ´Kandahar’ was made).

The Ilyushin Il-76 was famous of its strong airframes and the reliable construction. The expected service limits are 30 years, 10,000 landings and 30,000 flight hours. It was widely used by several military and civil operators all over the world and became one of the most-recognized aircraft developed in the Soviet Union. The Ilyushin airlifter is commonly nicknamed горбатый (humpbacked), while the modernized, stretched variant ´MF´ designed in 1995 was sometimes called тюнинговый (tuned). 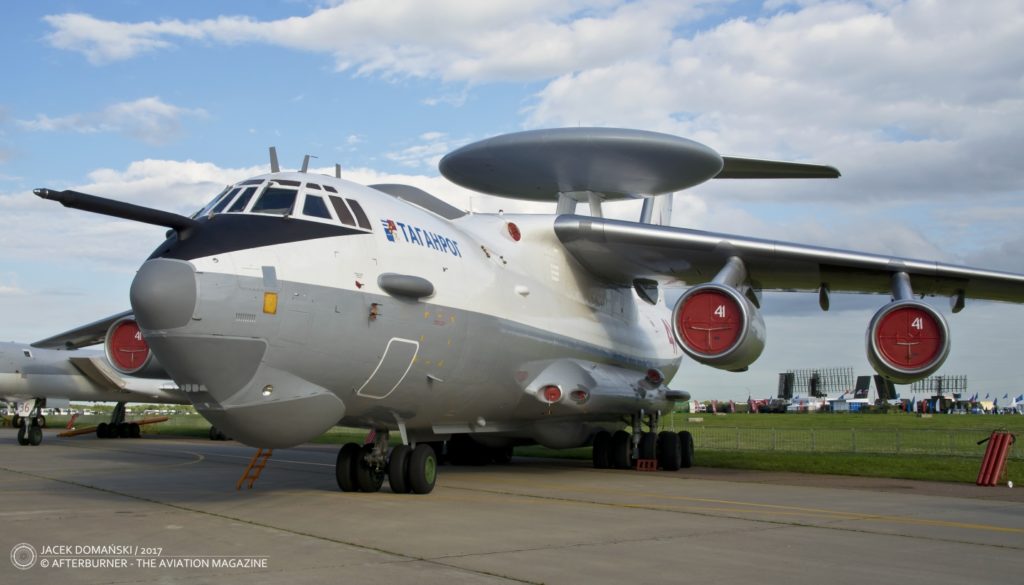 The production and development of Il-76 continues, after the collapse of the Soviet Union the production was moved from Tashkent Aviation Production Association (now in Uzbekistan) to the CJSC Aviastar-SP (Авиастар-СП) factory in Ulyanovsk. Certainly, the produced numbers are very small, comparing to the Cold War era mass production. The new Il-76MD-90A price was reported in 2017 to reach approximately 5 billion RUB. 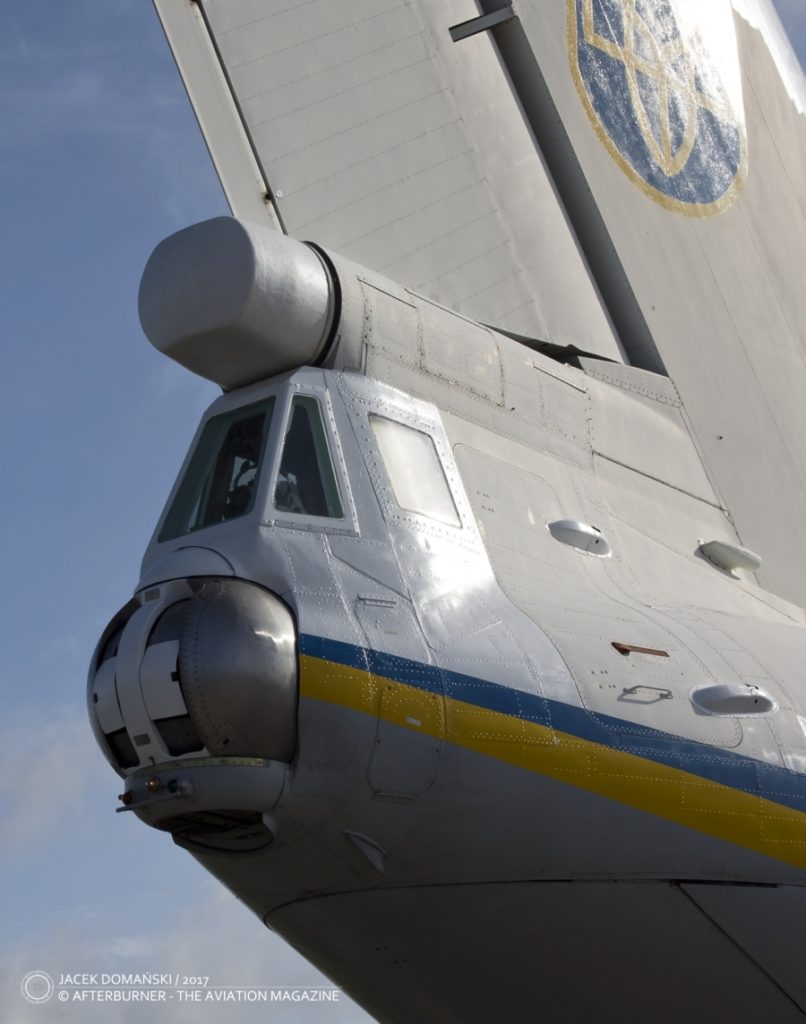 The close-up of the tail gunner position (the cannons were removed) – Il-76MD, Ukrainian Air Force

The remarkable journey to France with the WWI aeroplane replica

Russian Helicopters Holding Company negotiating delivery of up to eight helicopters to Malaysia.