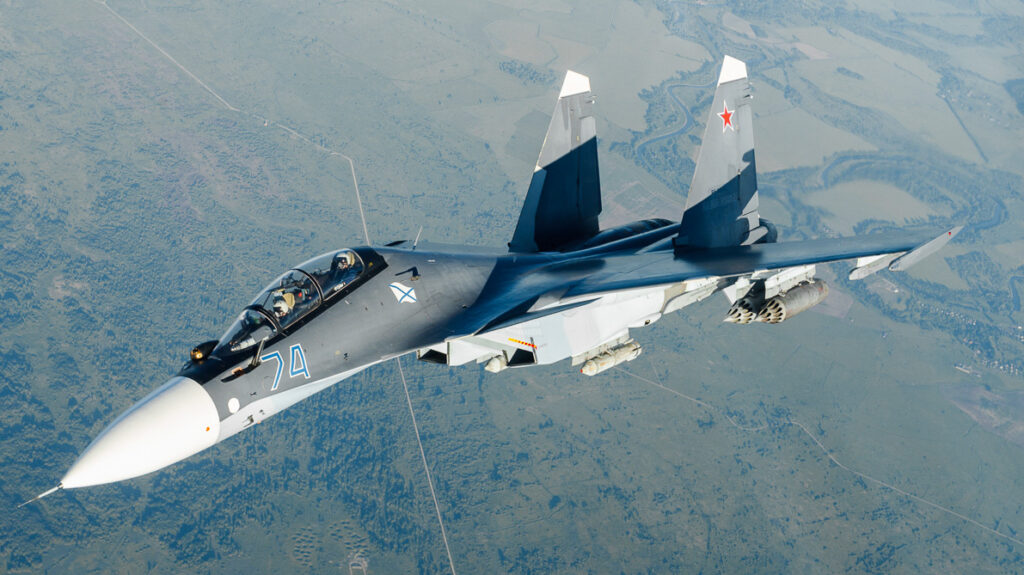 The exercise was held on nine training grounds in Russia and other five in Belarus. The Russian MOD had acknowledged that more than 760 of military vehicles (including 290 tanks), over 80 aircraft and 15 ships were involved in ´Zapad-2021´ – of which 350 vehicles and approximately 30 aeroplanes and helicopters were operating within the territory of Belarus.

Although that periodic, multinational exercise is usually being considered as focused on ground forces drill, the series of ´Zapad´ trainings also include several additional activities, performed by air force, army aviation, fleet, military police and other branches of the Russian and Belarusian armed forces.

As already mentioned, in this year´s edition of the exercise over eighty aircraft of the Russian and Belarusian air force, the Russian army aviation and the Baltic Fleet naval aviation were actively participating. Among them were Su-35S, Su-30SM, Su-27 supersonic fighters, MiG-31BM interceptors, Su-34 fighter-bombers, Su-24 and Tu-22M3 bombers, Il-76MD and An-24 transport aircraft, as well as a variety of helicopters, including Mi-8, Mi-24/35, Mi-28N and Ka-52. Majority of the Russian aircraft involved in ´Zapad-2021´ were deployed by units based within the Western Military District (Западный военный округ).

Nevertheless, ´Zapad-2021´ was marked by active participation of the Baltic Fleet naval aviation. A joint strike force of Su-30SM multipurpose fighters and Su-24 bombers have performed several air raids against mock enemy, including high-precision bombing practiced at an air shooting range located in the Kaliningrad region.

The naval aviation had also accomplished several missions focused on supporting the ground forces. A variety of targets was arranged at the training area to imitate command posts, fortifications, vehicles and other military equipment. Breaking down an air defence of the mock enemy was also a part of that training.

A pair of Baltic Fleet Su-27s was involved in an intercept-and-destroy scenario focused on counteraction against cruise missiles. The naval aviation fighters were operating from Chkalovsk airfield in the Kaliningrad region. The Su-27 crews, acting within their air defence duty, had to detect the cruise missiles launched from mock enemy aircraft and destroy them with air-to-air guided missiles. That part of the exercise was executed over the Baltic Sea.

The live-fire phase of the exercise was monitored by mission objective control, gathering data from combat vehicles, aircraft and control points within the training range. As reported by the Russian MOD, the Baltic Fleet aviation was the one to achieve a hundred percent effectivity in destroying the ground targets.

A large-scale use of UAV by the Baltic Fleet naval aviation should be also mentioned here. Орлан (Orlan) and Форпост (Forpost) aircraft actively participated in several training scenarios that were executed at Pravdinsky and Khmelevka ranges. Among their tasks there were reconnaissance duties, adjustment of artillery fire and supporting tank units during combat.

An objective of controlling and securing airspace over the training areas was assigned to a joint, Belarusian-Russian fighter force. The crews of Su-35S and Su-30SM aircraft were operating from airfields located in the Ryazan and Tambov regions, as well as from air bases in Belarus.

In addition, a long-range air defence was secured by MiG-31BM interceptors of the 6th Army of the Air Force and Air Defence. The high-altitude fighters were operating from their home air base located in the Tver area and performed several live-fly missions against unknown aircraft that violated the Russian airspace.

In total, during the exercise, more than twenty sorties were performed by the MiG-31s from Tver. Usually, the role of violators was played by Su-24M bombers and their objective was to destroy several strategic objects as power and hydroelectric plants.

The long-range aviation had participated in ´Zapad-2021´ by deploying a formation of six Tu-22M3 strategic bombers. Those aircraft were operating from their home airfield in the Saratov and Kaluga regions and performed air raids on targets located at Mulino training ground. One-and-a-half-tonne bombs were dropped on control and command points, from altitudes between 1,000 and 2,000 metres. A close escort duty for those strategic bombers was executed by Su-35S fighters.

The training ground at Mulino was also the location where a large-scale air raid of a large, joint air formation, was performed. A total number of sixty aircraft was involved in that operation, including Su-24MR reconnaissance jets, Su-25 close support aircraft, Su-34 fighter-bombers, Su-24 and Tu-22M4 bombers.

First of all, the Su-24MRs accomplished their reconnaissance mission over the mock enemy area and marked targets for the main aviation group. They were followed by a formation of Su-35S fighters that secured the airspace and allowed the bombers to perform their mission. The air raid was performed in a high-precision mode, with use of the latest electronic and optical guidance systems. A separate task was assigned to Su-34 fighter-bombers – their objective was to destroy a column of armoured vehicles on the move.

The abovementioned joint bomber force operated from airfields located in the regions of Lipetsk, Voronezh, Kaluga, Saratov and Tambov.

Additionally, during ´Zapad-2021´ exercise, the aviation forces of the Western Military District have played approximately ten tactical scenarios. They included intercepting flying targets, as well as destroying military equipment and fortifications of the mock enemy. More than forty aerial targets were destroyed in a live-fly phase of the training – including both conventional aircraft, UAVs and cruise missiles.

The fighter pilots from Russia and Belarus have also practised missions focused on intercepting of enemy aircraft and engaging them in combat. Those trainings were performed at altitudes of over 10,000 metres and Su-30SM of the Russian Aerospace forces were used in a role of enemy aeroplanes.

Similarly to the Baltic Fleet, also the forces that executed their training at Belarusian and Russian ranges, used a variety of UAV – Иноходец (Eng.: ambling gait), Ласточка (Eng.: a swallow) and Орлан-10 (Orlan-10).

The UAVs were used for reconnaissance duties and as a support for the ground forces. The latter task was involving КМ-8 Грань (KM-8 Gran) – recently-introduced 120mm guided mortar weapon system with a laser homing head. The ´Swallow´ unmanned combat aerial vehicles were used to destroy the mock enemy manpower and armoured targets, using their shrapnel and armour-piercing ammunition.

´Orlan´ aircraft were also cooperating with a formation of robotic vehicles that were operated by the ground forces, as well as with Миротворец (Eng.: peacemaker) – a mobile anti-UAV complex.

On 9th May 1995, at the 50th anniversary of the Victory Day in Europe, during the grand ceremony and with participation of 55 official foreign delegations, the memorial complex at Poklonnaya Gora in Moscow was […]

At the beginning of October 2021 we had a possibility to visit a historical aircraft collection located in western Bohemia, at Plzeň-Lině airfield. The Classic Trainers association – similarly to Točna aviation museum we have […]