Aviation adventure in the heart of Harz – Luftfahrtmuseum Wernigerode.

Wernigerode is a relatively small town situated in the heart of the Harz mountains. The city is a well-known holiday destination, famous for its picturesque old town with the medieval city hall and other historic buildings, the Wernigerode Castle located on a hill above the town, and primarily for the narrow-gauge railways – Harzer Schmalspurbahnen.

The narrow-gauge railway system around Wernigerode is a popular destination among the railway enthusiasts and it´s often called the most beautiful steam railway in the world. Harzer Schmalspurbahnen are year-round operating their 25 steam locomotives on scenic routes of the network comprising approximately 140km of track, including the most favoured Brockenbahn route from Wernigerode to Brocken (1142m), the highest peak of the Harz mountains.

Although the steam railway is still the most recognizable engineering monument in the region, there is a growing number of tourists attracted already by the much younger development located in the centre of the Harz mountains – Luftfahrtmuseum Wernigerode, established there in 1999. At first under the name of Museum für Luftfahrt und Technik, the aviation musuem was created and founded by the passionate aviation collector and the local businessman, Clemens Aulich. And at that time, starting with only three significant exhibits.

Locating the aviation museum in Wernigerode, the city without any noteworthy aviation history and even without a proper airfield (as it was closed in 1947), might seem a bit surprising, but almost twenty years of existence already proved that this tourist destination works perfectly as the museum seat. 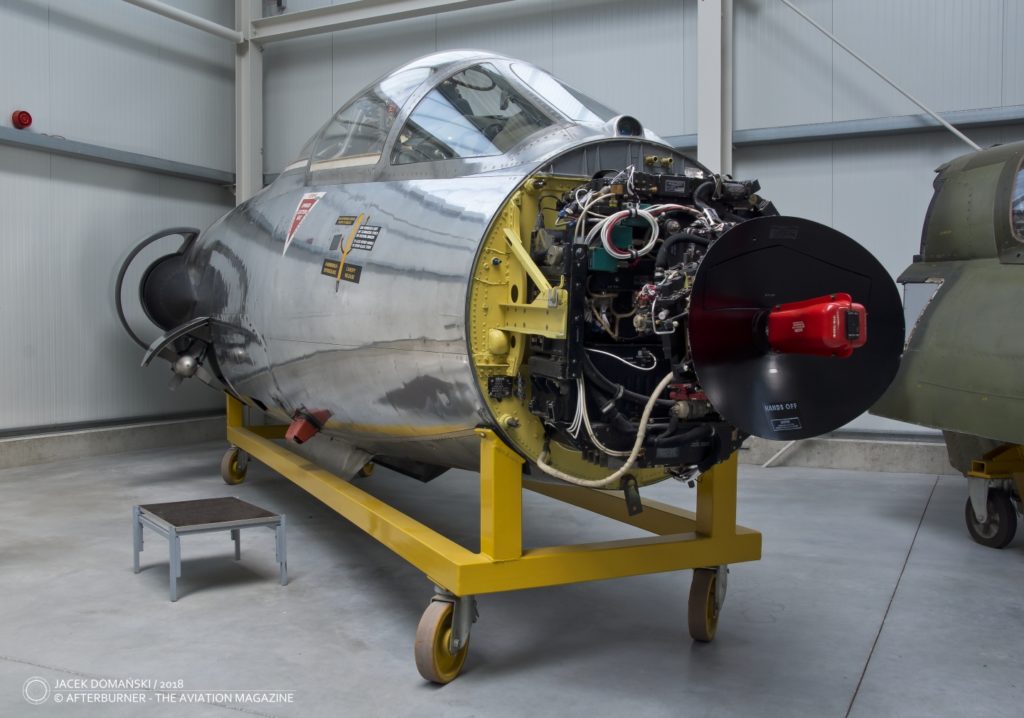 Clemens Aulich, the owner of the Luftfahrtmuseum, is already collecting the aviation artefacts for many years. In 1990s he was entrusted with the task of optimizing and privatising the electric motor factory in Wernigerode, Elektromotorenwerks Elmo. Before long, the idea of turning one of the former factory buildings into a new home for his aviation collection was born. After the reconstruction, the production buildings were turned into the museum hangar and the new project could welcome the first visitors. 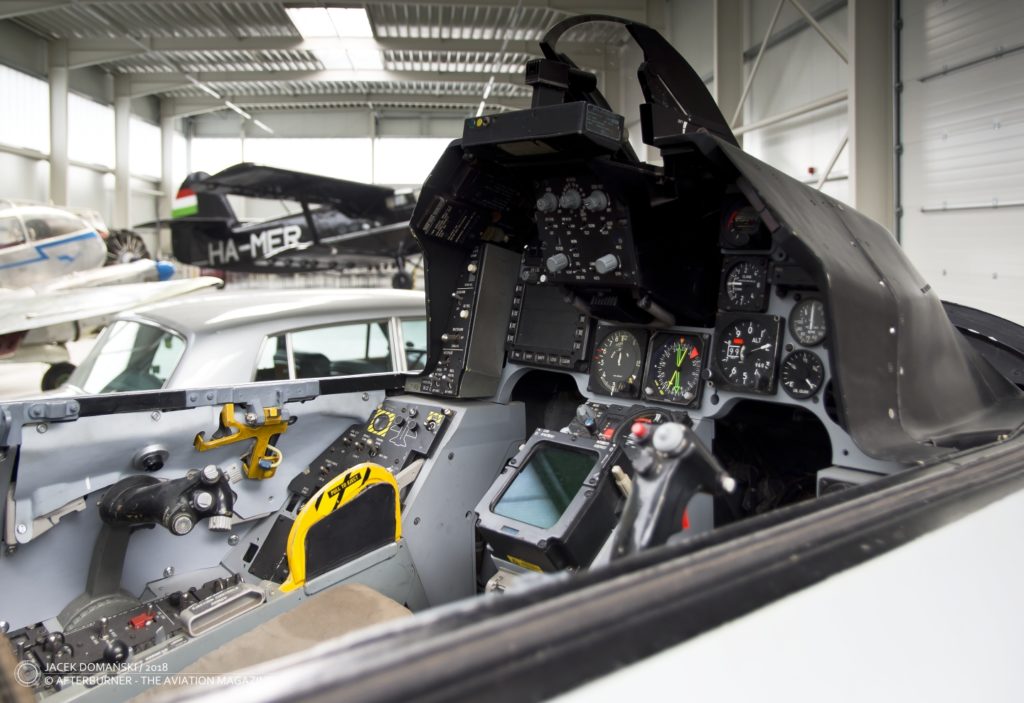 Today, after nineteen years of operation, the initial small exposition grew into the amazing collection of more than 60 aircraft and 1000 of other aviation-related exhibits, occupying four hangars with 6000m² area. The newest museum building was constructed in 2016, providing more space for the modern visitors´ facilities.

It´s very easy to experience the uniqueness of this place by careful exploration of that impressive aviation exhibition. In contrast to many other privately-owned museums, the collection in Wernigerode is not a random set of aircraft found at the scrapyard or just retired items collected from the air force. Many of the aircraft exhibited in the Luftfahrtmuseum have the interesting story behind it and discovering those stories is an awesome adventure and could take many hours to complete all the stories (the visitors may learn basic facts from the information panels located in front of the aircraft and use the audio guide to find out more intriguing stories). 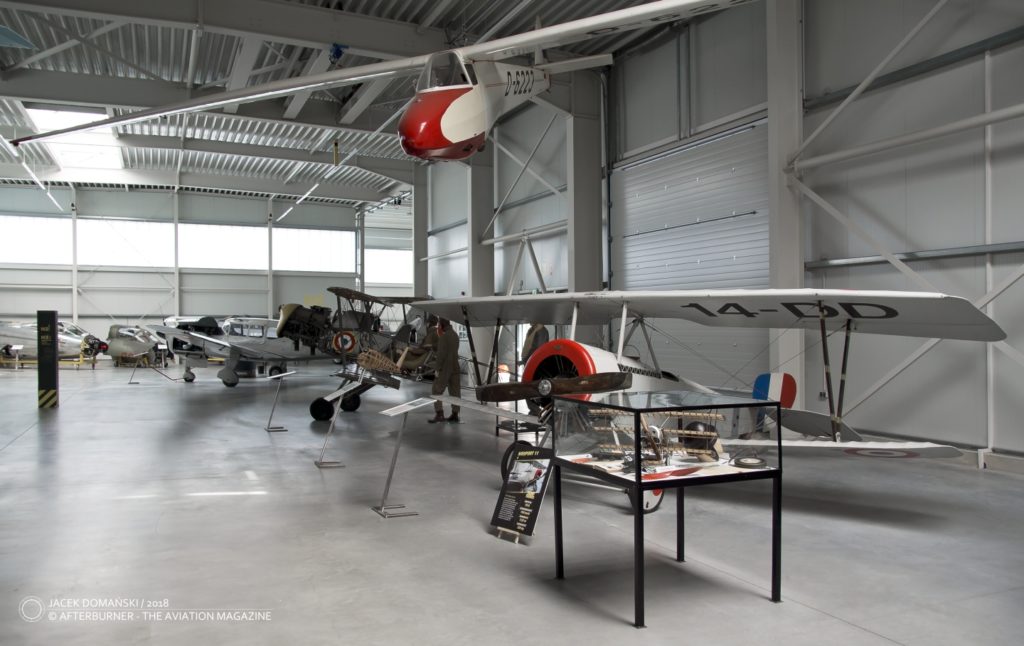 Introducing at least a few examples of those background tales, the Westland Whirlwind HAR.10 helicopter should be mentioned first. This 1961 manufactured helicopter had a very intensive service in the Royal Air Force, including the operations in the Southeast Asia, but also – and this is the most interesting part of its history – was a part of the RAF fleet providing transportation services for the British Royal Family. It was confirmed, that the Whirlwind now exhibited in Wernigerode museum was used by Prince Charles and Lady Diana, as well as other members of the Royal Family. The complete information is provided by the audio guide, together with Clemens Aulich´s conclusion that if the previous owners would be aware of this, the Whirlwind would never leave England. 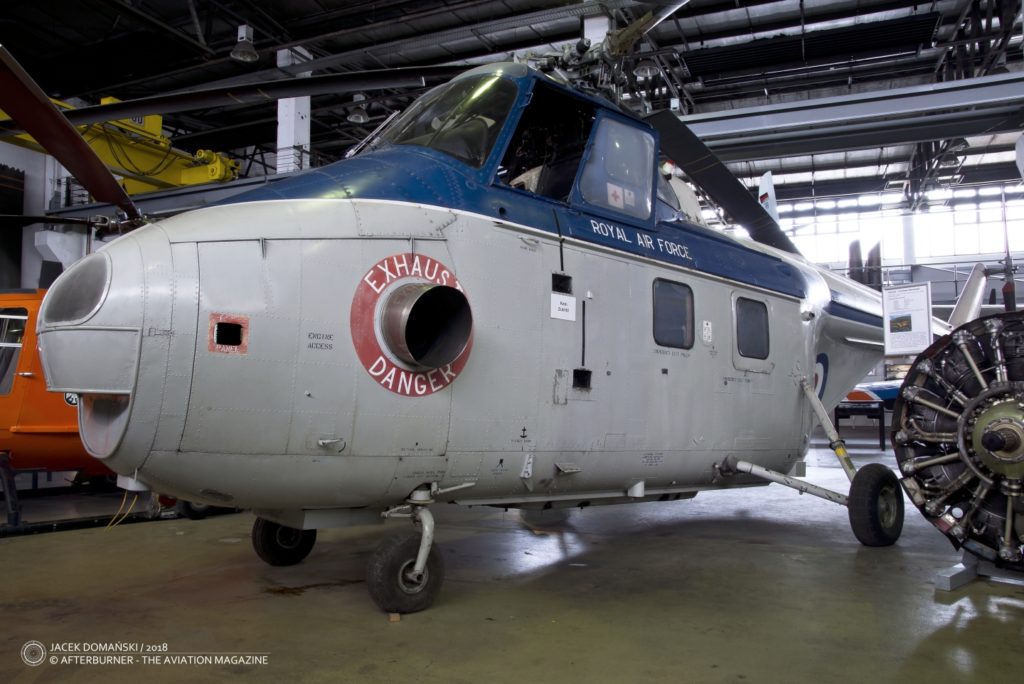 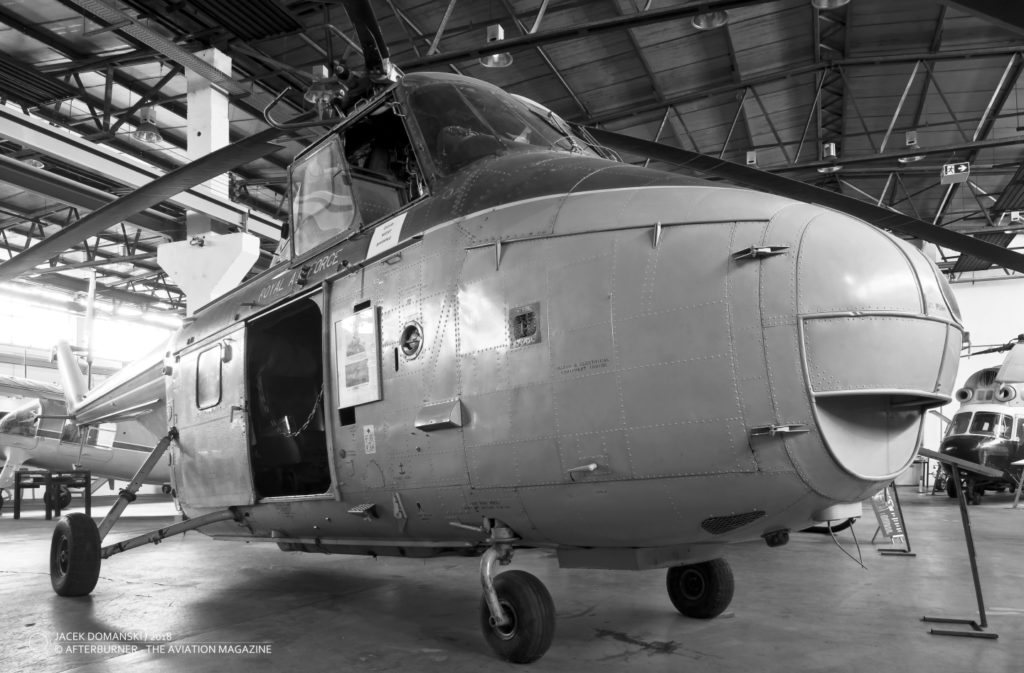 Another notice-attracting exhibit is standing just a few meters away from the Whirlwind, and this is the Czechoslovak-made Zlín (LET) Z-37A Čmelák (Bumblebee) agricultural aircraft. This airplane is connected to the brave escape of four people – the pilot with his son and the pilot´s girlfriend with her daughter – from East Germany in the summer of 1979. With his 5-year-old son in the cockpit and other two passengers squashed behind in the hopper for chemicals, the daring pilot managed to reach West Germany without any maps and flying just 2 – 3 metres above the ground to avoid radars. They landed successfully on the meadow near Groß Vahlberg. 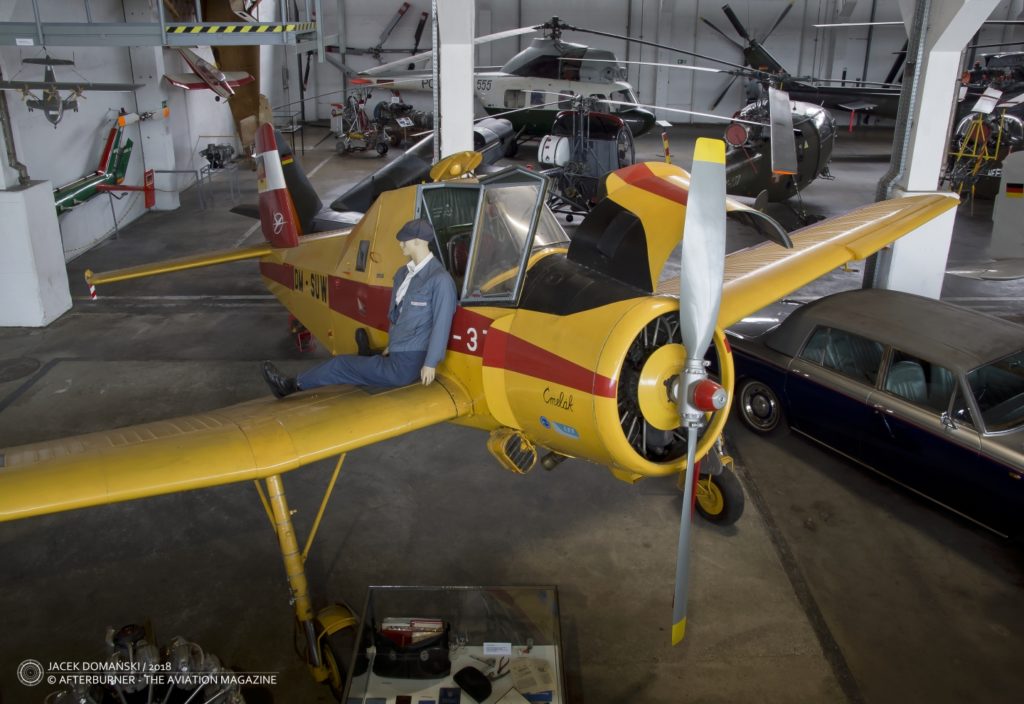 Speaking of the Czechoslovak-manufactured airplanes, the Aero Ae-45 cannot be overlooked. Although Ae-45 could be considered a common aircraft, the one exhibited in Wernigerode has a very unusual livery – the blue strips and crane logo identify the Aero as the Deutsche Lufthansa airplane. This is, certainly, not the well-known Lufthansa airline but the company under the same name established in 1955 as the national East Germany airline, even though the rights to use the brand Lufthansa were already obtained by the West German company one year earlier. As a result of such trade mark infringement several legal actions were taken against the East German airline, including preventing the Deutsche Lufthansa from being admitted to IATA. The airline was eventually brought to an end in 1963 and replaced by Interflug. 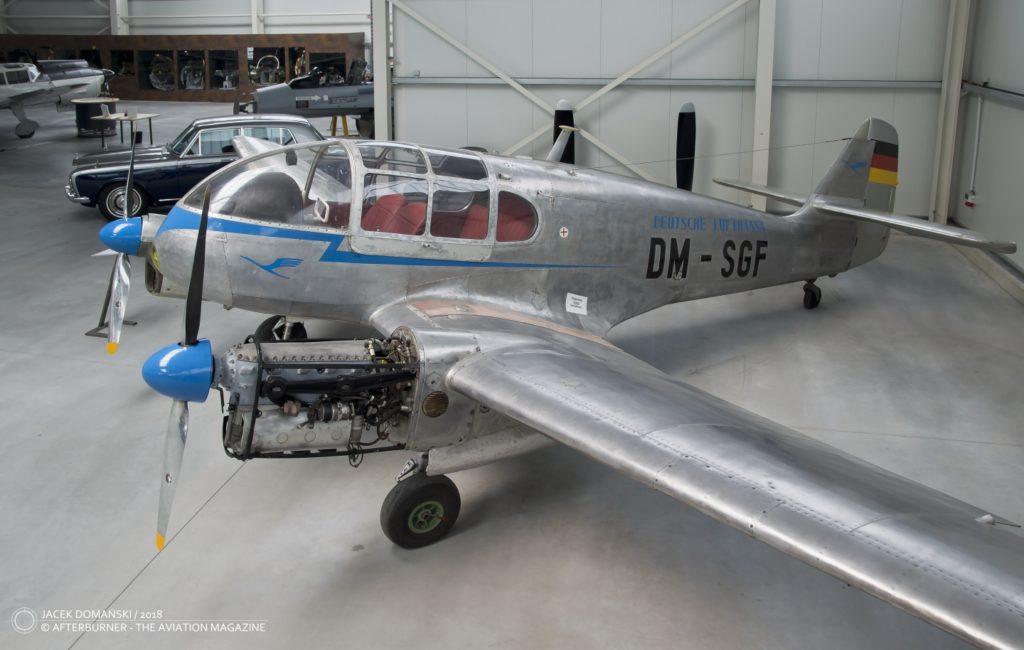 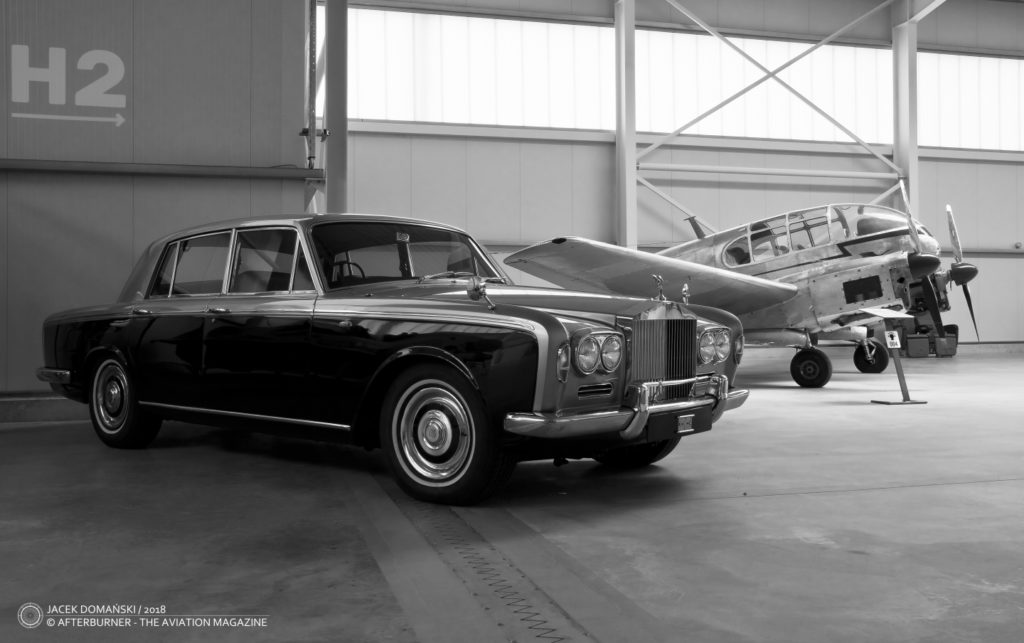 Following the aircraft related to the history of the German state and the existence of the inner German border, another reference can be easily found – the Mil Mi-2 helicopter used by the GDR border guard (however currently in the Bundespolizei livery) and the Aerospatiale Alouette II rotorcraft used by the Bundesgrenzschutz are now facing each other in the museum hangar. 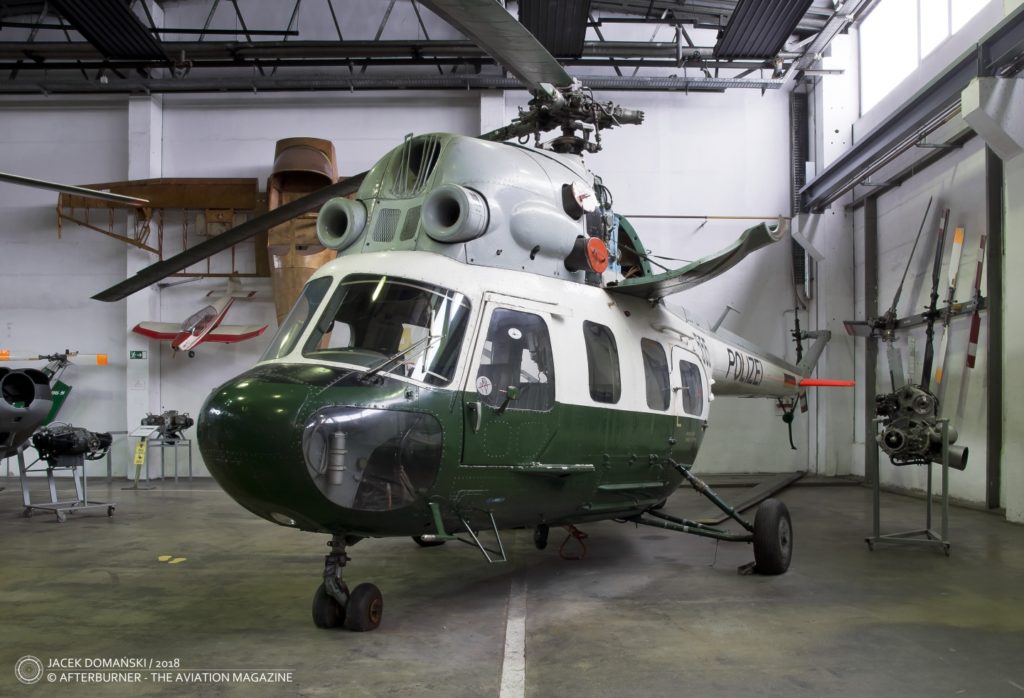 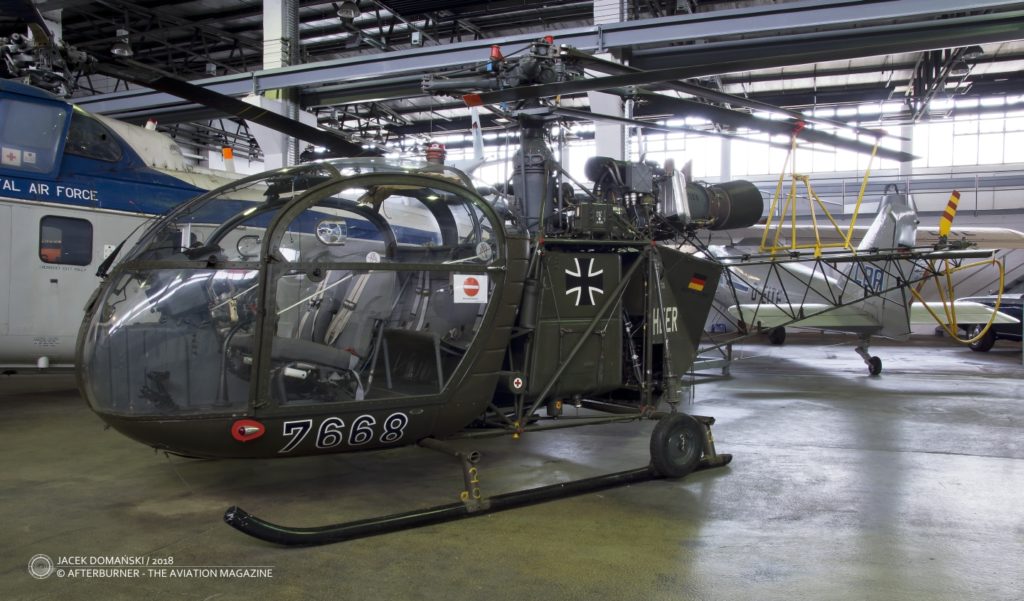 And the abovementioned combination is just one of many examples from the interesting blend of western and eastern aircraft among the Luftfahrtmuseum Wernigerode aviation collection. The visitors to the museum can see Fiat G.91 (in attractive ´tiger-squadron-painting´), Lockheed F-104 Starfighter, North American F-86 Sabre or Dassault Mirage III and compare them with the Warsaw Pact counterparts: MiG-21SPS, MiG-23MF or Lim-2 (MiG-15bis). 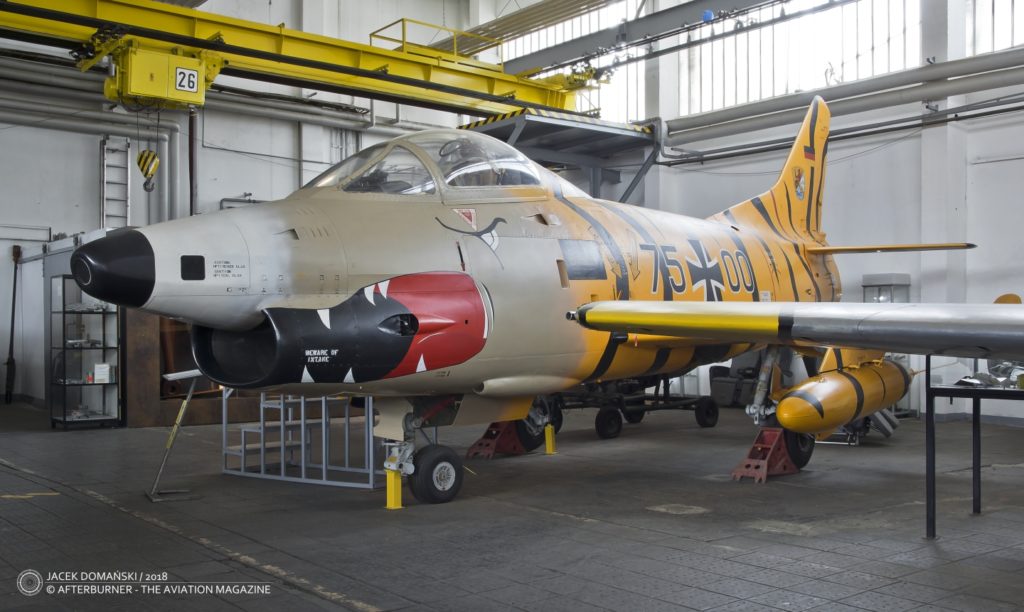 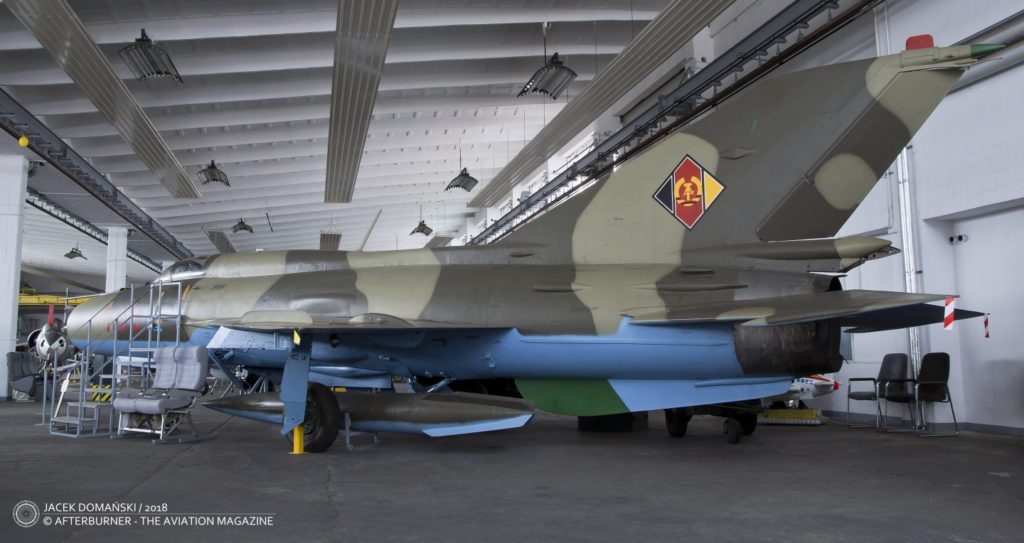 The newest addition to the museum collection is the Transall C-160D ´Silberne Gams´ (Silver Chamois) – the aircraft with the special ´60th Anniversary of LTG 61´ livery, that was the highlight of the Tag der Bundeswehr 2017 in Penzing. This was also the year that LTG 61 was disbanded and all remaining C-160s were moved to LTG 63 or scrapped. All, except the 51+01 – on 18th December the silver-painted Transall made her last flight to Flugplatz Ballenstedt, where the Silver Chamois is temporary stored. After completion of the necessary works and procedures, the C-160 will be housed at the roof of the museum hangar and made accessible to the visitors. 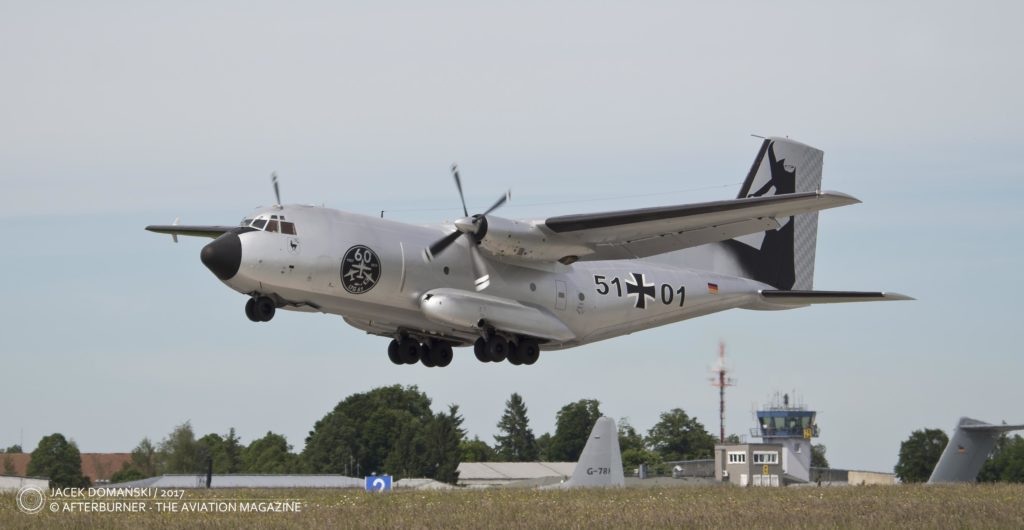 There is no possibility to mention and describe all fascinating aircraft in Wernigerode museum, therefore just a few others would be featured as the conclusion: Bölkow Bo 105 rescue helicopter (as presented in 1975 at the Paris Air Show), Hunting Jet Provost T4, Lockheed Shooting Star T-33A or HAL HF-24 Marut (deposited in Luftfahrtmuseum by the Deutsches Museum Flugwerft Schleissheim).

A quick summary of the other aviation artefacts should start with mentioning the impressive collection of the ejection seats and flight suits, including the David Clark S-1030 full pressure suit, worn by the SR-71 crews. The museum also owns and exhibits several aircraft nose sections, cockpits and the cockpit trainers (Su-22, F-16, F-4, MiG-21). Several other small items and additional display cabinets may be found among the exhibited aircraft. 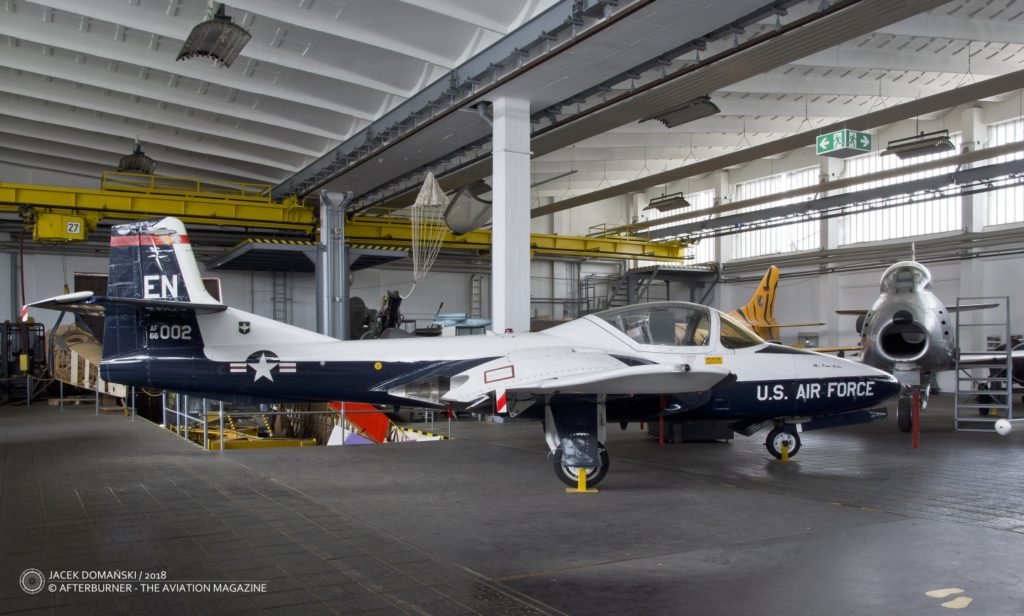 Another extraordinary, but either awesome, is the exhibition showing the development of the aircraft control panels. Along the 35-meter-long line with the display cases, the museum visitors may follow the evolution of the instrument panels, from the early World War I airplanes, through the interwar period, World War II to the modern jet era, seeing the panels from the pilot´s perspective.

And finally, there are two flight simulators in the Wernigerode aviation museum. The first of them is a replica of Messerschmitt Me 109 cockpit, and the second one is an original, realistic full-scale Bell UH-1D flight simulator. The adventure of flying in any of them must be booked in advance and, certainly, is not included in the basic admission fee. 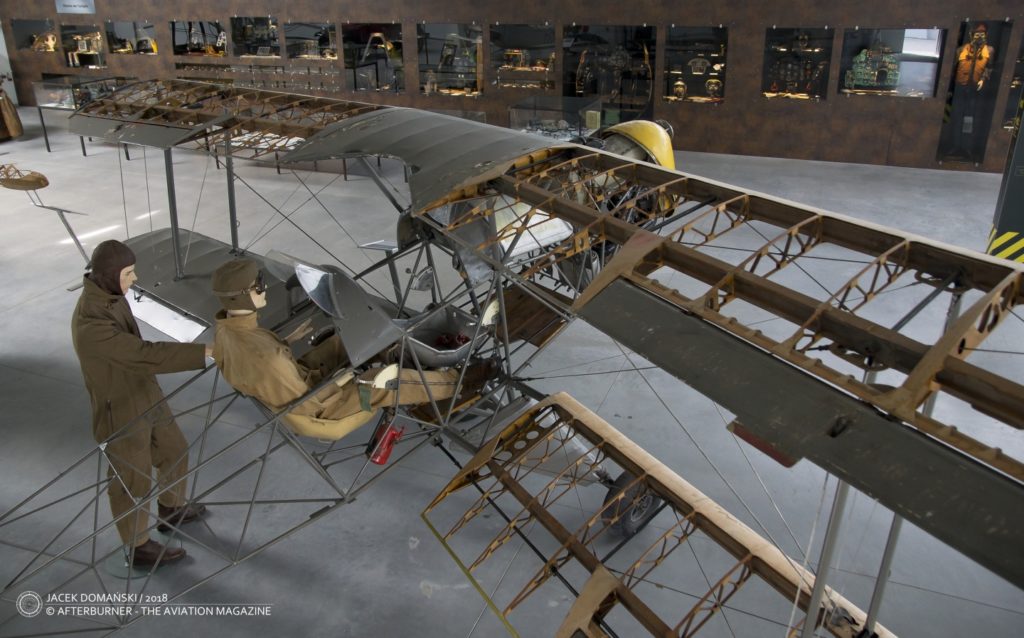 ´Stripped, down to the bone´ Bücker Bü 131 and, in the background, the marvelous 35-meter-long exposition showing the evolution of the instrument panels

The Luftfahrtmuseum in Wernigerode is a modern, visitor-friendly place, where the aircraft are exhibited without any barriers or fences. The large number of airplanes is presented in the way allowing the visitors to see the usually unseen details through the opened covers and cockpits. All aircraft are in the perfect condition – restored, painted and clean, a remarkable thing, considering many other similar institutions and the condition of their aviation collections. 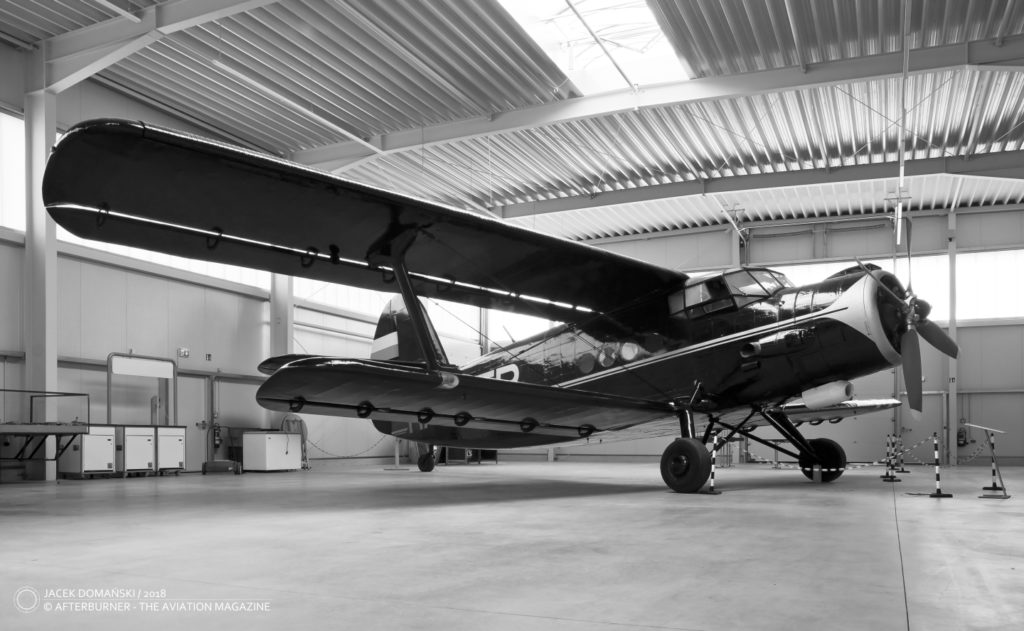 The admission fee is 8 € for adults, 5 € for children between 6 and 15 years, 0 € for children 0 – 5 years (June 2018). Group, family and other discounted tickets are also available. The ticket office is located in the newest museum building and combined with the café and the souvenir shop. The spacious, and free, car parking is available on site.

This museum surely is a place worth visiting during a stay in Wernigerode or Harz mountains. And given the variety and attractiveness of the exhibited aircraft, the trip to the Luftfahrtmuseum should be considered by every aviation enthusiast. There is no risk of disappointment there and, additionally, you might be amazed by the Wernigerode old town, steam railway and the beautiful Harz mountains. 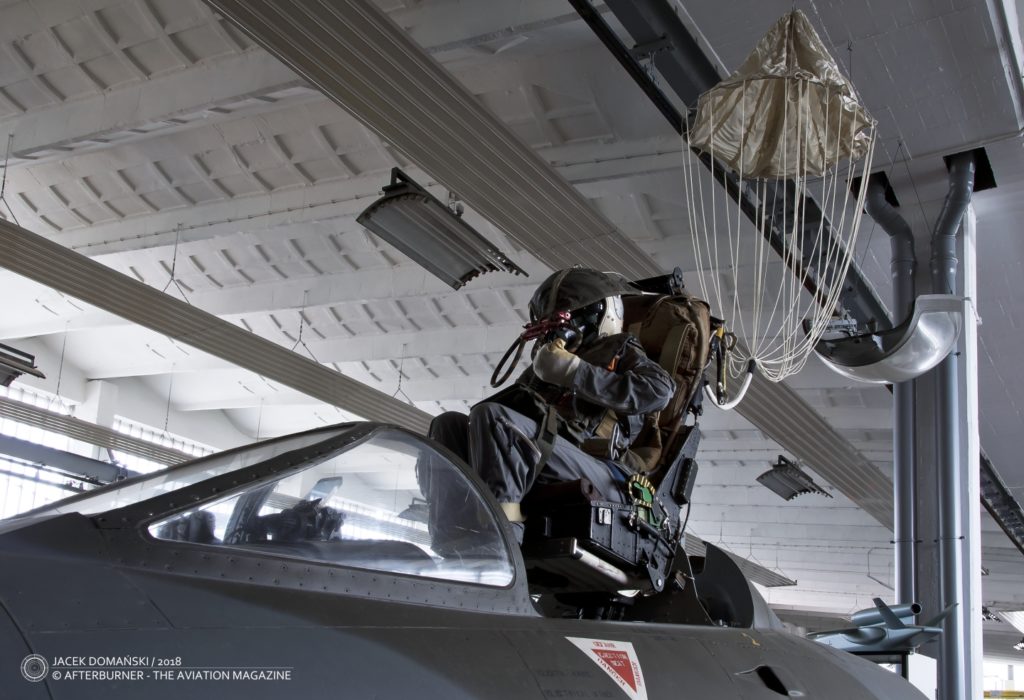 Royal Museum of the Armed Forces and Military History – Brussel