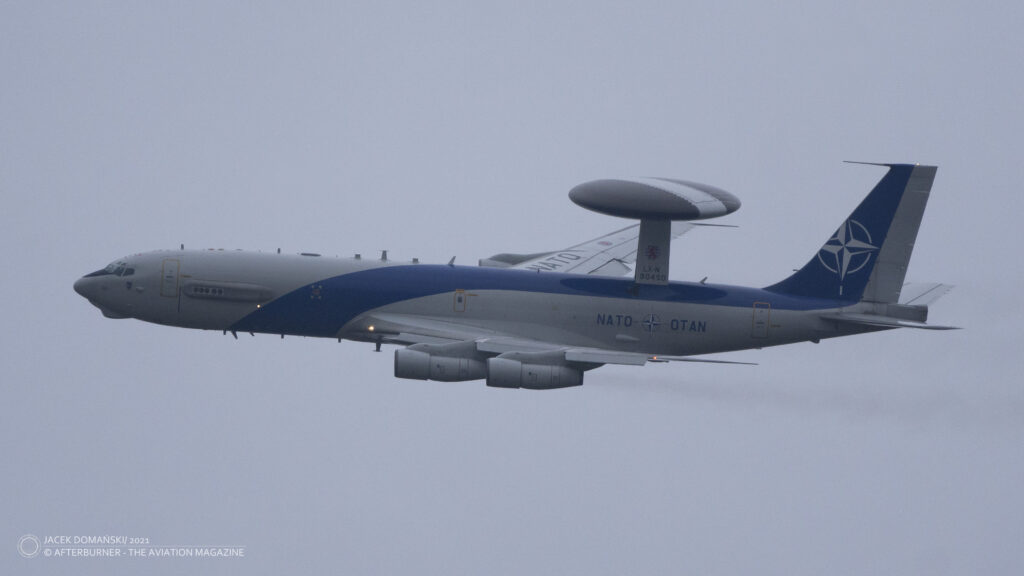 In the 1970s, the NATO authorities identified the need of acquiring a fleet of an Airborne Early Warning (AEW) aircraft, to be operated within military structure of the treaty and independent from any national air force. According to then issued requirements, the new aircraft had to be capable of detecting small and fast-flying aircraft at long range, find and identify maritime targets and also able to provide additional airspace-control function, if necessary.

In December of 1978, the purchase of AEW aeroplane was officially approved by the NATO Defence Planning Committee and the new aircraft had to be based on Airborne Warning and Control System (AWACS), already operated by the USAF. Deliveries of eighteen aeroplanes were planned for 1982-1985 and Geilenkirchen airfield in Germany was chosen as the main operational base of Alliance-owned AEW fleet. In addition, the NAEW&C programme was launched, focused on upgrade of forty NATO Air Defence Ground Environment sites.

The first aircraft was delivered in January of 1982. All the E-3A aeroplanes owned by the Alliance, were officially registered in Luxembourg, within the country´s participation in the programme. The AEW fleet was divided in four units, being a part of the E-3A component – the 1st, 2nd and 3rd Squadrons and the Aircrew Training Squadron.

During the thirty five years of operational service, the fleet of NATO E-3A aircraft had accumulated approximately 350,000 flying hours without any serious accident or fatal injury. The only crash occurred on 14th July 1996 in Greece – when the aeroplane LX-N 90457 collided with a flock of birds during take-off at Preveza airfield, overrun the runway and struck a sea wall. It was then written off, being damaged beyond repair. In 2015, the first of Alliance-owned E-3A aeroplanes was retiring from active service and two more followed shortly. As a consequence, the 3rd Squadron was disbanded.

Apart from its main base at Geilenkirchen, the NAEW&C established three forward-operating bases at Konya (Turkey), Aktion (Greece) and Trapani (Italy), as well as a forward-operating location at Ørland (Norway).

The British E-3D Component operated by the Royal Air Force used to be an integrated part of the NAPMO, however the RAF is currently retiring its fleet of E-3D aircraft. In the following years they will be replaced by new Boeing E-7 Wedgetail AEW&C aircraft.

Also the fleet of NATO-owned E-3A is supposed to be retired soon after 2035. Nevertheless, it was already declared that the Alliance would keep its AEW capability by acquiring modern aircraft. The programme focused on purchasing an implementing of the E-3A successor was named the Alliance Future Surveillance and Control Initiative. In the meantime, the existing fleet of E-3A aeroplanes is a subject of significant modernizations and upgrade, with the value of one billion USD.

The pictured E-3A ´LX-N 90450´ was recently visiting, for training purposes, the air base in Pardubice, the Czech Republic. Despite a very dull weather – low dark clouds, fog and rain – there was a possibility to take some (at least) acceptable shots of that aircraft. Its characteristic blue strip and NATO signage are remains of special liveries that aeroplane was wearing in previous years. In 2017 it was a painting that celebrated the 35th anniversary of AWACS service in NATO and two years later the aircraft was re-labelled to observe the 70th anniversary of the Alliance.

If you would like to learn more about the development and operational service of Boeing E-3A Sentry aircraft, there was a featured story published on our web page in May of 2021 and is available here.

Only a hundred days left to MAKS-2021

The first meeting of Organizing Committee for the preparation and carrying out the 15th International Aviation and Space Salon MAKS-2021 was held on 22nd March, traditionally a four months before date of this event. The […]

On 11th April 2021, the aerobatic group ´Berkuts´ (Беркуты, English: Golden eagles) celebrated the 29th anniversary of its foundation. The team, being a part of the 344th Centre for Combat Employment and Retraining of Personnel […]