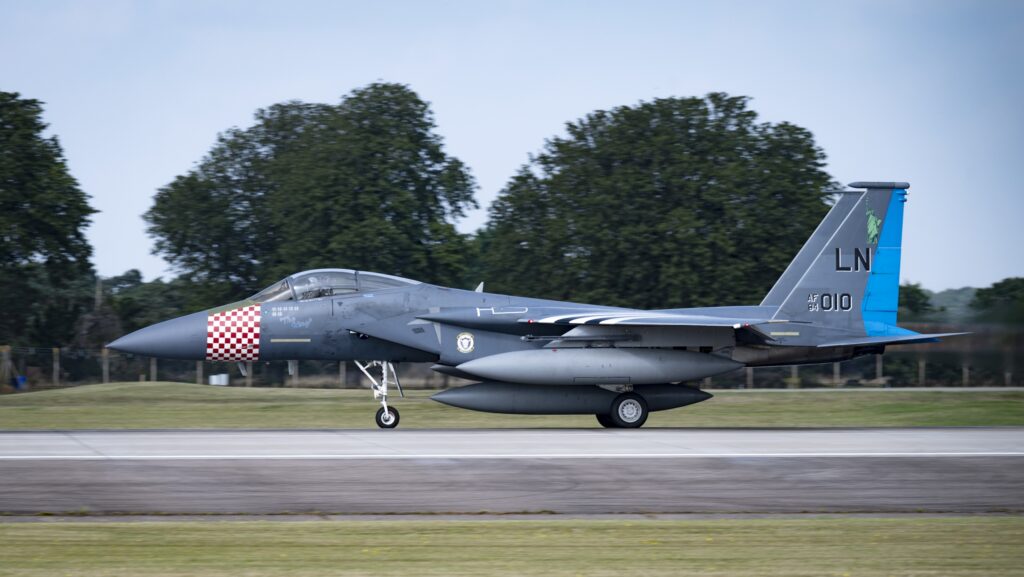 On 16th September 2021, an F-15C Eagle assigned to the 493rd Fighter Squadron took-off from RAF Lakenheath station for the last time, heading back to the USA. The aircraft was the last of three ´heritage jets´ of the 48th Fighter Wing.

For the first time, three F-15 jets assigned to the 48th Fighter Wing (48 FW) were unveiled in January of 2019. Two F-15E Strike Eagles and one F-15C Eagle, one from each fighter squadron forming the 48 FW, were painted in heritage colours of P-47 Thunderbolt fighters from the World War II era.

To be exact, the painting on those USAF jets recalls a livery used by the 48th Fighter-Bomber Group. Between 1944 and 1945, all three squadrons of the group were equipped with P-47 fighter-bombers and assigned to the Ninth Air Force, actively participating in operations over Normandy, English Channel, Belgium, the Netherlands and Germany.

The heritage project was focused on supporting the 48 FW legacy, participation of the 48th Fighter-Bomber Group in the D-Day operations, as well as celebrating the 75th anniversary of the Invasion of Normandy. The three abovementioned Eagle jets received a characteristic checkered pattern on their noses, D-Day black and white stripes down the wings. In addition, several other details – with reference to the original World War II aircraft – were painted on them and, finally, the Statue of Liberty was painted on their tails.

During the year – apart from usual operational tasks within the 48 FW – the heritage jets participated in several D-Day celebrations and other events in Europe. Among them, there were flypasts over Normandy on the 75th anniversary of the D-Day or flypast over Poland in support of the MSPO military trade fairs held there.

With time, eventually, those F-15s returned to regular duties and their heritage liveries were removed. The F-15C of the 493rd Fighter Squadron became the last that preserved its exceptional colours until September 2021. That aircraft, nicknamed ´The King´, was painted in honour of Lt. Col. Royal Newman ´King´ Baker – one of the few pilots who operationally flew in the World War II, Korean and Vietnam wars. Since November 1943, Baker was assigned flight commander of the 493rd squadron and flew 272 combat missions over Europe.

As rumours say, the aircraft 84-0010 is going to be transferred to the National Air Guard, after the necessary maintenance and upgrades. Obviously, the heritage painting referring to the 48 FW will be soon removed.

The 48th Fighter Wing is the only F-15 wing stationing in Europe. On 4th July 1954 the unit was awarded the name ´Statue of Liberty Wing´ and currently remains the only USAF wing with both name and numerical designation. On daily basis, the 48 FW is based at RAF Lakenheath station, the largest USAF air base in England located 70 miles northeast of London.

It was recently announced that the fourth fighter squadron is going to be assigned to the 48 FW. The 495th Fighter Squadron will be reactivated after approximately thirty years and, unlike the other ´Liberty Wing´ squadrons, will be equipped with F-35A Lightning II jets. It will be the first USAF squadron flying the fifth generation fighter to be permanently based overseas. Arrival of the first Lightning II aircraft to RAF Lakenheath is expected later this year.

All photos © U.S. Department of Defence (DoD), cover photo (An F-15C Eagle assigned to the 493rd Fighter Squadron, dubbed ‘The King’, takes off from Royal Air Force Lakenheath for the last time) – USAF photo by Sr. Airman Madeline Herzog. DoD information materials and press releases were used, in compliance with Public Domain licence. The appearance of U.S. Department of Defense (DoD) visual information does not imply or constitute DoD endorsement.

Douglas DC-3A (c/n 2204, HB-IRJ, Super Constellation Flyers Association), flying display at Red Bull Air Race, Gdynia, July 2014. The story of the legendary aeroplane the DC-3 undoubtedly is, began in the first half of […]

A week ago, the aviation world was disturbed by an incident that occurred in the British Isles. By this, we mean the engine problems suffered by the Catalina flying boat called ‘Miss Pick Up’ while […]