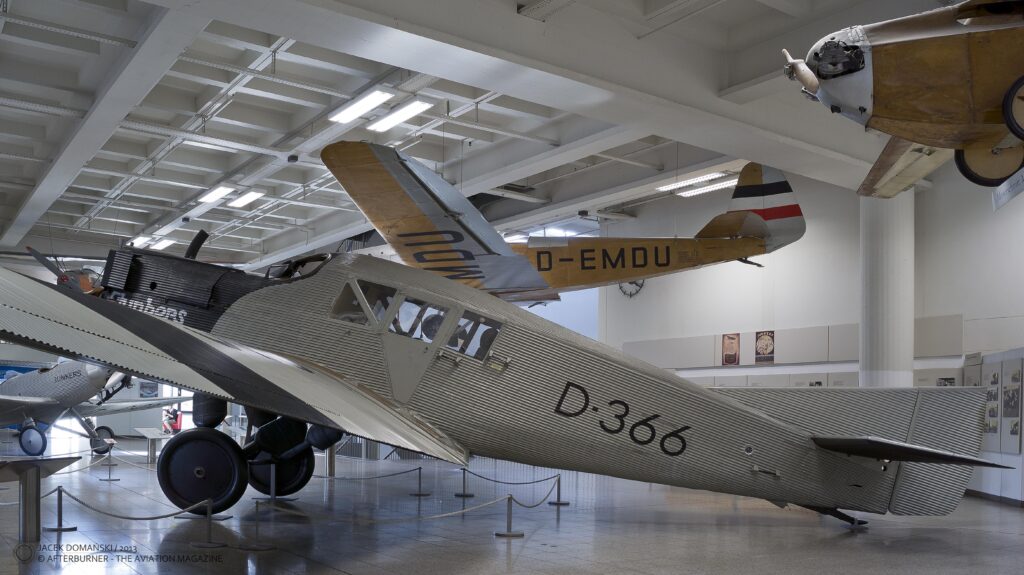 At the end of 1918, when the Great War was over, Hugo Junkers and his construction team had to abandon their work on further development of fighter and scout aircraft. Germany, under the Treaty of Versailles was forbidden to have, or produce, any military aircraft. Therefore, there was no other option for an aeroplane manufacturer but to switch to transport aircraft and passenger airliners.

Nevertheless, the first project launched by Junkers shortly after the war, was still based on a design of military aeroplane. That aircraft, designated as J 12, was nothing more than a re-designed Junkers J 10 (CL.I) close support monoplane from 1918. At that time, the company was already using the last two manufactured – but for abovementioned reasons not delivered to the armed forces – J10 aeroplanes in a role of passenger aircraft. They were quickly converted at the end of 1918 but their enclosed cockpit could accommodate only one passenger and it was clear that conversion might work only a temporary solution.

Otto Reuter, chief designer of the company, was assigned the task of turning the J 10 into a four-seat aeroplane. Wings, front section of the fuselage, tail parts and undercarriage of the former military aircraft were used, assembled together with a completely newly designed central part of the fuselage. Nevertheless, during the designing stage it became clear that even with a new cabin, the aircraft being initially designed for a crew of two, cannot be converted into the airliner with four seats. As a result, Reuter had to abandon such idea and start the development from the very beginning.

Junkers J 13, as the aircraft was initially designated, was significantly bigger, had completely re-designed wings and fuselage. It could accommodate up to four passengers in an enclosed, comfortable cabin. Two pilots were placed in a separate, semi-enclosed cockpit with only small front windshields. Similarly to other aviation designs from the Junkers company, J 13 was all-metal, low-wing monoplane with its structure made of aluminium alloy and covered with characteristic corrugated duralumin skin.

The first prototype, named ´Annelise´ after Junkers´ daughter, was ready just after six months of development. It successfully performed its maiden flight on 25th June 1919, flown by company test pilot, Emil Monz. Serial production of the new airliner was launched a few weeks later and in the meantime the aeroplane type was re-designated into F 13 (F for Flugzeug, English: aircraft).

Initially, due to post-war restrictions on Germany, the F 13 could not be sold to any domestic operator and the first aircraft were offered only for foreign customers. Despite market saturation caused by thousands of surplus aircraft converted into passenger aeroplanes, the Junkers airliner quickly gained recognition all over the world – mostly thanks to its advanced and remarkable design.

In 1922, the ban on German aircraft was lifted and since then the Junkers F 13 could be operated also by domestic companies. Nevertheless, the aircraft achieved an international success, being sold to several civilian and military operators on all continents – including Afghanistan, Argentina, Brazil, China, Iceland, Japan, South Africa and the USA. A few aircraft were license-manufactured in the Soviet Union and designated as Ju 13.

Serial production of the Junkers F 13 was ceased in 1932, after having built more than 300 examples of the aircraft. However, the exact number is not known and vary from 314 to 328, depending on the source. According to Wikipedia, the last commercial F 13 was retired from active service only in 1951, in Brazil.

The aircraft created by Otto Reuter became the first all-metal airliner in the world. Sometimes it is also regarded as the first passenger aircraft designed for that role from the very beginning.

The Junkers F 13 exhibited at Deutsche Museum in Munich is the aircraft initially sold in 1928 to Amanullah Khan, the King of Afghanistan. In 1968, that F 13 was brought back from Afghanistan to Germany and in 1984, after reconstruction, became a part of Deutsche Museum collection.

Regrettably, as no original documentation and statutory plates have survived, it was not possible to identify the particular aircraft that was recovered from Afghanistan. It could be either Wachtelkönig (c/n 2018) manufactured in 1926 or Nymphensittich (c/n 2019) from 1927.

5th May 2020 Jacek Domański PHOTO OF THE WEEK

Bell (Dornier) UH-1D Iroquois, formerly of Hubschraubergeschwader 64, exhibited at static display in Holzdorf air base, Tag der Bundeswehr 2018. Introduced in 1959, Bell UH-1 Iroquois quickly become one of the most-recognized helicopters in the […]