When we talk about Russian military museums, usually Monino and Kubinka are the first that come to mind. And, without a doubt, those two locations are the best known ones, being the ´dream spot´  for every military history enthusiast.

However, those two museums are just a tip of the iceberg and there are dozen other interesting museums in Moscow and the metropolitan area. Vadim Zadorozhny’s Vehicle Museum (Arkhangel’skoye), Museum of Strategic Missile Forces (Vlasikha), Air Defence Forces Museum (Balashikha), Victory Park (Moscow) or Museum of Military Uniforms (Shchyolkovo) are just a few examples of what the area of Russian capital can offer.

Another notable example of worth-visiting museum institutions in Moscow is the Central Armed Forces Museum (Центральный музей Вооружённых Сил Российской Федерации). Its main building, located at the Soviet Army Street (ул. Советской Армии), is easily accessible by the public transport – just a 350 metres away from Dostoyevskaya metro station. However, the museum operates at several other locations in Moscow and its neighbourhood, that visiting at least a few of them is also recommended. In fact, the Central Air Force Museum in Monino is also just a branch of the Central Armed Forces Museum. 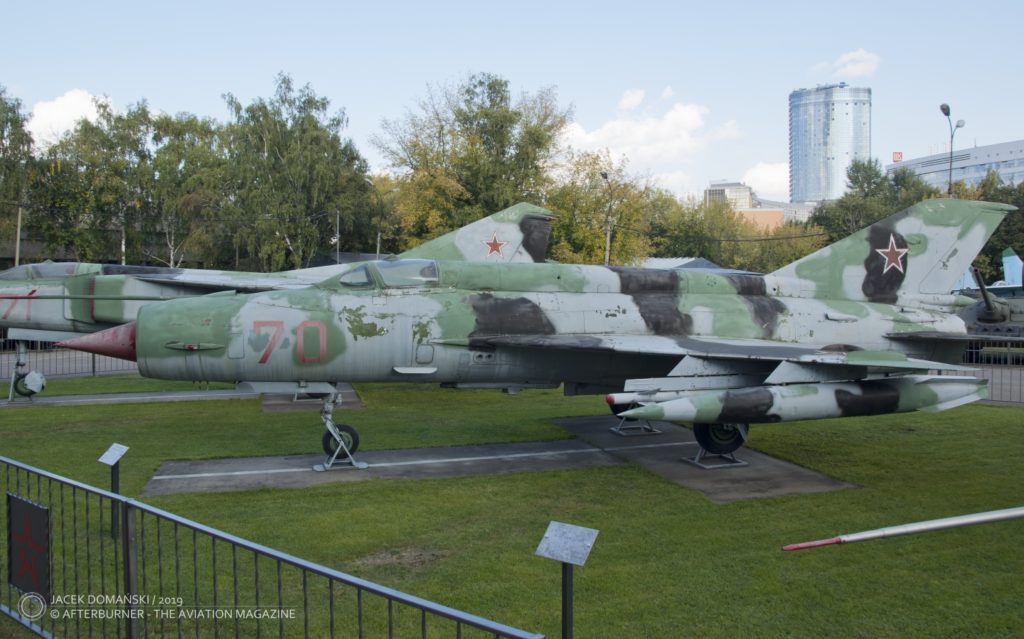 The history of the museum dates back to 23rd December 1919, when it was created by an order of the Revolutionary Military Council of the Republic. It was the very first museum established after the October Revolution, named ´The life of the Red Army and Navy´ with its first seat at GUM department store (State Department Store at the Red Square). During the 1920s, the institution – now officially called The Museum of the Red Army and Navy – several times changed its locations in Moscow, however none of them was suitable for such purposes. Only in 1927 the museum was moved into the Central House of the Red Army (now Suvorov Square) and was able to create a professional, permanent exhibition of the military history from 1905 to date.

With the increase of international tensions in 1930s, that resulted in several armed conflicts, new exhibitions about the Sino-Soviet conflict and the Winter War were subsequently added. During the World War II, despite being evacuated to Kazan in autumn of 1941, the museum did not cease its activities. Beyond the usual tasks, the museum personnel was then collecting the war relicts and equipment in order to preserve them for the future generations. And with the advance of the Red Army in 1944 / 1945, the museum additionally began collecting the war trophies. According to the official web site of the Central Armed Forces Museum, twenty expeditions to the front line were performed between November 1943 and April 1945.

In late 1950s it was decided to re-establish the museum as the independent institution named the Central Armed Forces Museum and move the exposition to a new building, that had to be constructed at the Soviet Army Street, just a few hundred meters away from the current site. The new building, with the exposition area five times bigger than the old location, was officially opened on 8th May 1965, at the 20th anniversary of the Victory Day in Europe.

Today, the exhibition of the Central Armed Forces Museum covers 5,000 m² in 24 halls and the open-air area. The walk-through the museum starts with the Grand Duchy of Moscow and exhibits from the 14th century, however the years until the beginning of the Great War are shown in only two halls near the entrance.

The main exhibition starts with the World War I and then takes the visitor through the war years, the October Revolution and the Russian Civil War, then the interwar period, World War II, the Cold War years and finally the modern military history and armed conflicts of the 1990s – 2000s. 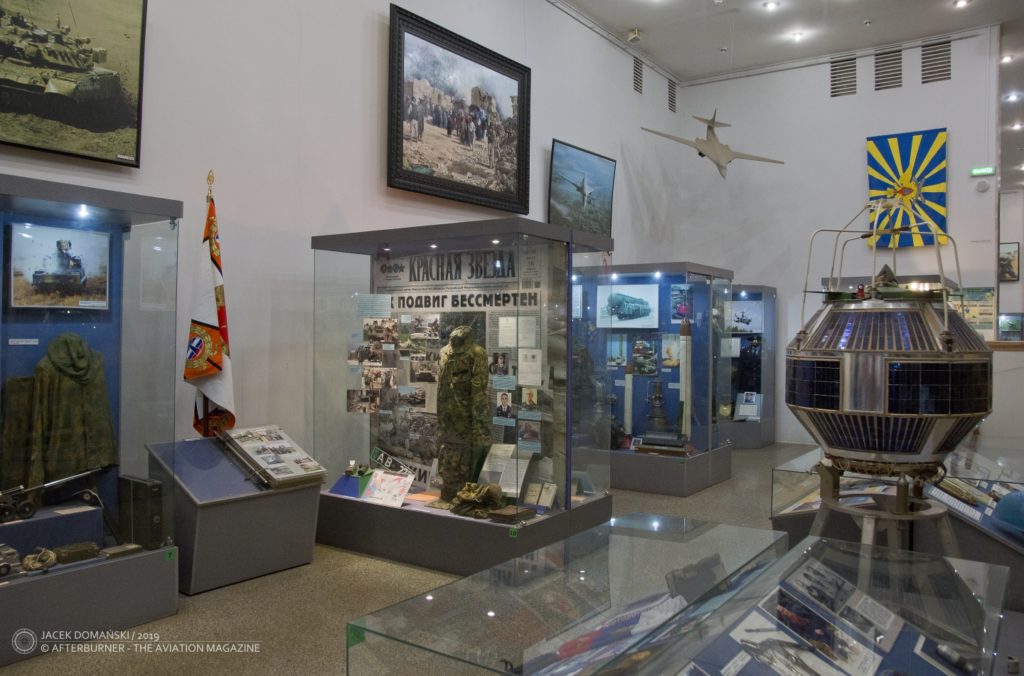 The collection of the Central Armed Forces Museum includes more than 800,000 exhibits and many of them are really of the unique value. Although focusing here of the aviation-related display, we have to mention at least a few other exhibits one can find there.

Certainly, the part of the display covering the years of the October Revolution and the Russian Civil War is one of the most impressive ones. The visitors can see there an incredible number of documents, military banners and uniforms, real-scale dioramas and an admirable collection of personal items belonging to legendary revolutionary commanders: Frunze, Kotovsky, Chapayev and  Blücher.

The highlight of the World War II exhibition is the hall with war trophies, including the original eagle from Reichstag, a collection of captured German military banners, Hitler´s belongings and many other amazing artefacts.

In the post-World War II and modern history sections, the visitors can get familiar with the Cuban Revolution and Cuban Missile Crisis, the Soviet-Afghan War, armed conflicts in Africa and Asia. One of the most interesting displays is focused on the history of the Caucasian wars. One of the most significant items exhibited there is a fin window from K-141 ´Kursk´ submarine, that sunk in an accident in 2000.

The aviation-related exhibits starts with the 1930s and are related mostly to the Sino-Soviet war and the development of the Soviet Air Force. In the World War II section, the collection of interesting relicts can be seen – the remains of the German aeroplane shot down near Moscow, excavated parts from the Soviet fighters and bombers, and the air crews´ personal belongings.

One of the highlights of the display, and probably the most-known exhibit in the museum, is located in the Cold War section. It is a wreckage of Gary Powers´ Lockheed U-2C spy aeroplane, shot down near Sverdlovsk (today Yekaterinburg) on 1st May 1960. The hall where U-2 is being exhibited, includes also a MiG-21 cockpit, few examples of aviation armament and air defence equipment. 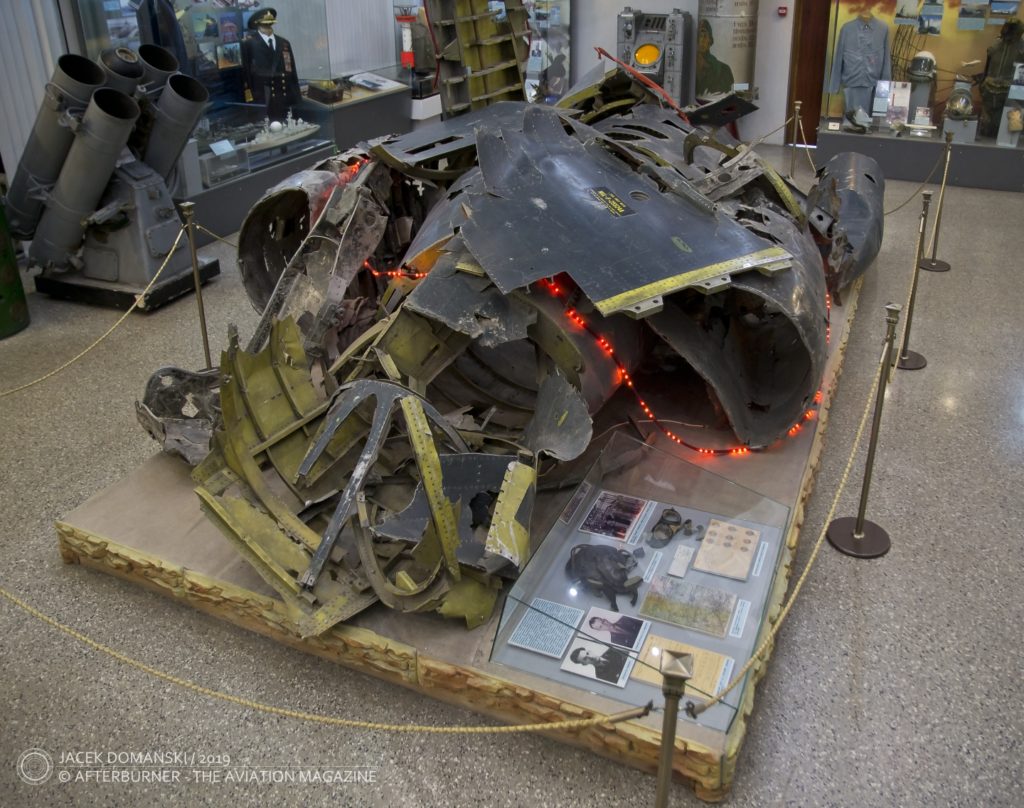 In one of the halls covering the period of 1950s and 1960s, the space exploration exhibition is located. It includes the items related to and the personal belongings of the Soviet cosmonauts: Gagarin, Tereshkova and Leonov.

At the end of the indoor exhibition the visitors could get familiar with the current equipment of the Russian Aerospace Forces and see the personal items and uniforms that belonged to Timur Apakidze (considered the founder of the Russian Naval Aviation) and Oleg Peshkov (downed in Syria when flying Su-24).

The open-air exhibition includes 160 items – mostly tanks and armoured vehicles, artillery and aircraft, but the visitors can find there also the armoured train, boat, ballistic missiles and radar equipment. Especially noteworthy is the collection of tanks with all the iconic vehicles from the World War II era, including KV-1, KV-2, BT-7 or T-28.

Regrettably, the area of the open-air exhibition is too small for such number of large exhibits and however they are easily accessible and can be seen up close, most of them are very close to each other or hidden in the back row. Some of the aircraft, as Su-15TM, have also the pitot tubes removed, because they would be located in the visitors´ area and therefore causing danger for unwary guests. Although the museum deserves a bigger area for its outside exhibition, its rather unlikely it could be somehow enhanced in the near future. 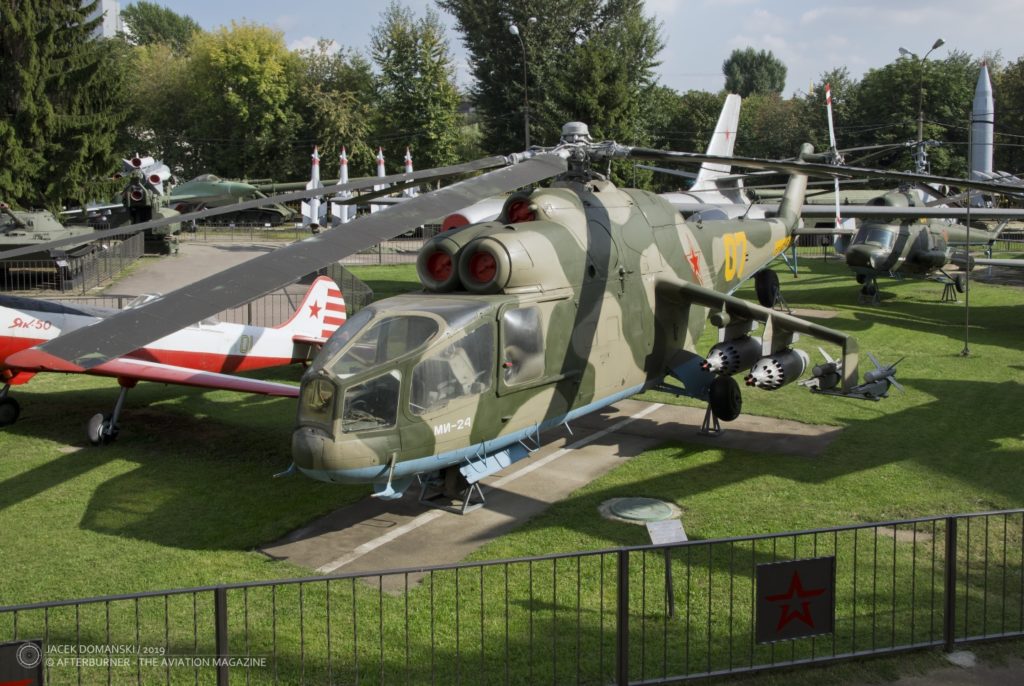 The condition of all aviation exhibits represents the average one can find at the open-air displays. However, most of them are clean and the regular reconstruction and maintenance works are performed on the exhibits – the already mentioned Su-15 fighter was already renovated, just like some examples of the armoured cars.

At the main entrance to the museum building a T-34 tank and R-9 Desna ballistic missile are welcoming the visitors and the doors are guarded by statues of a man and woman soldiers from the World War II period. On the right side of the façade there are two interesting monuments – a memorial to ´Kursk´ submarine crew and the monument of the Airborne Troops.

The Central Armed Forces Museum is opened from Wednesday to Sunday, opening hours are 10:00 – 17:00 from Wednesday to Friday and 10:00 – 19:00 during the weekends. The entrance ticket costs 300 roubles, there is also a possibility to ask for the guided tour in Russian and English (approx. 7000 roubles for the group up to 20 people). There are also four days in the year with free entrance to the museum, on 23rd February, 18th April, 9th and 18th May.

As already mentioned, the location is easily accessible by Moscow public transport and therefore could be an interesting alternative to Monino or Kubinka, if the available time doesn´t allow the full day trip outside Moscow. Presumably, the best time to visit the Central Armed Forces Museum for taking some photos at the outside display would be in the late autumn. We happened to be there in the middle of a summer day and challenged by the fast changing light conditions and the high contrast between the light and shadow areas.

Although the museum is a rather popular place, there was no crowds during our visit, so there were no problems with enjoying the exhibition. Admittedly, the Central Armed Forces Museum is visited by the large groups of tourists, but they usually run through it in a short time – and the number of them is significantly lower in comparison to the Victory Museum.