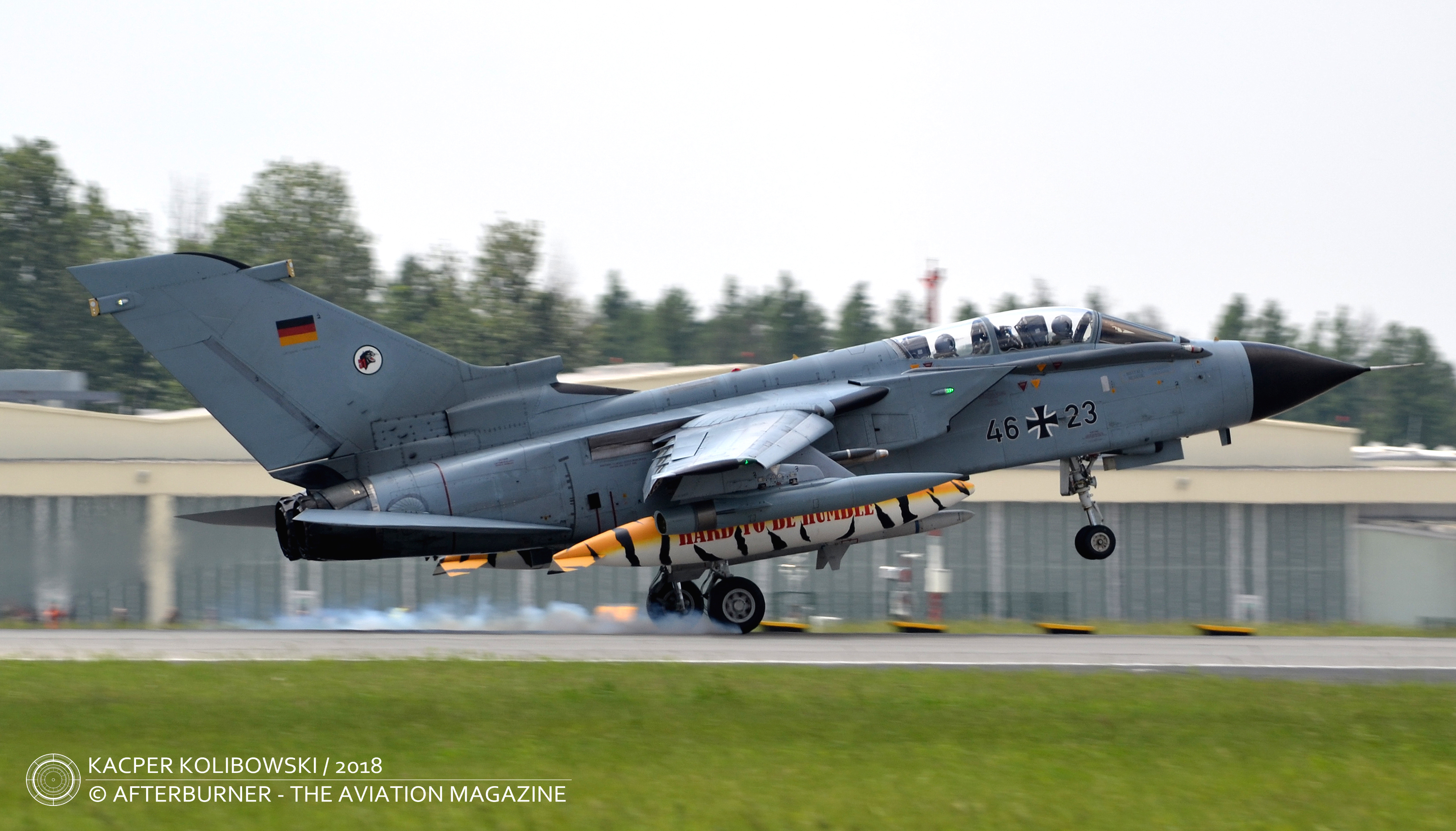 Panavia Tornado ECR from Taktisches Luftwaffengeschwader 51 ´Immelmann´ (TaktLwG 51 ‘I’), German Air Force, is touching down on the runway at the 31st Tactical Air Base in Poznań – Krzesiny, Poland, during NATO Tiger Meet 2018.

NATO Tiger Meet is the world’s famous, annual live-fly exercise, gathering the military aircraft from so-called ´Tiger-units´ from NATO and Partnership for Peace countries. A ´Tiger Meet´, because each unit participating in this initiative has a tiger as squadron emblem or crest – as a ´symbol of strength, speed and hunting prowess´.

The history of NATO Tiger Meets began as early as in 1960, when the French Minister of Defence Pierre Masmer suggested to tighten relationship and cooperation between NATO air forces by holding the joint exercises. This initiative fell on the soft ground and shortly, on 19th July 1961, the very first joint training took place at RAF Woodridge air base (Suffolk, England) with the participation of 79th Tactical Fighter Squadron USAF, No. 74 Squadron RAF and the French Escadron de chasse 1/12 Cambrésis.

Later that year the NATO Tiger Association was established, with the goal to improve the relationship between the NATO squadrons, then after the second meet next year, expanded to include also the coordination and advice for the annual ´Tiger meetings´. Another specific feature of the Association is, that this initiative is not dependent on any official NATO structures or commands.

Through the years, many other squadrons joined the ´Tiger meet´ initiative, in addition to the initial participants. Currently, the Association unites 24 full-member squadrons, 10 honorary members, 8 disbanded and 2 former units.

In 2018, for the first time in NATO Tiger Meet history, the organization of the annual exercise was granted to Poland – 6th Tactical Air Squadron / 31st Tactical Air Base in Poznań-Krzesiny was the host of the meeting. Nearly 2000 military forces personnel and 70 aircraft from 14 countries participated in the NTM 2018, including the units from Austria, Belgium, Czech Republic, France, Germany, the Great Britain, Greece, Hungary, Italy, the Netherlands, Spain, Switzerland, Turkey and, certainly, Poland.

TaktLwG 51 was one of the abovementioned units participating in NTM 2018, the squadron is operating Panavia Tornado ECR and IDS, and also Israeli-manufactured IAI Heron drones. The unit, formerly known as Aufklärungsgeschwader 51 is a Tiger Association member since 1994 and already organized two Tiger Meets, in 2004 and 2014, at their home base in Schleswig-Jagel.

The pictured aircraft is one of the 247 Panavia Tornadoes delivered to the Luftwaffe between 1979 and 1992, including 210 of IDS and 35 of ECR variant (another 112 Tornado IDS were also delivered to the German Navy – Marineflieger squadrons). At its peak, the Tornadoes were operated by five Luftwaffe fighter-bomber wings (31, 32, 33, 34 and 38), two Marinefliegergeschwader (1 and 2) plus training and conversion units. After the defense cuts that started in late 1990s, the Tornado units were reduced to two – TaktLwG 51 and TaktLwG 33.

The Tornado 46+23 was previously operated by Jagdbombergeschwader 32 which was disbanded in March 2013 and most of its Tornadoes were transferred to Schleswig-Jagel. The aircraft is carrying the ´tiger-look´ additional fuel tanks – as painting the various ´tiger stripes´ and other tiger-related elements on the participating aircraft is one of the many traditions, unique to the NATO Tiger Meet exercise.