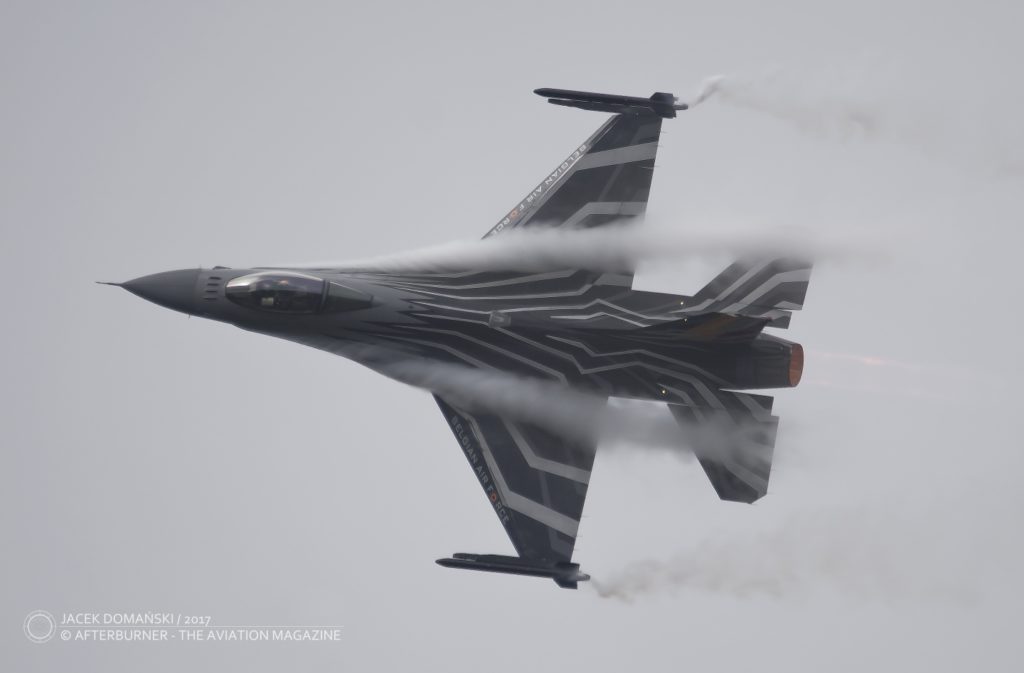 With just seven editions, the Sanicole Sunset Airshow is still the younger brother of the well-known Sanicole International Airshow which celebrated its 40th anniversary in 2017. Despite this young age, the sunset show already gathered a group of loyal supporters who arrive to Sanicole on Friday, two days before the main aviation event.

Those who were there a year ago, could enjoy the awesome, warm and sunny, autumn day. It seems as even the weather conditions were planned by the organizers, not only the flying displays – the golden sunset, marvellous light reflecting on the aircraft and the full Moon in the background. Is anything more needed for a perfect aviation afternoon?

On balance, the weather forecast for 14th September 2017 was promising just rain and showers, and definitely neither a sunset nor the golden light. The whole Northern Europe was affected by the heavy rain, and Belgium was not an exception. However, for the real aviation enthusiast, the weather conditions are not an acceptable excuse and still a few thousand spectators arrived to Sanicole airfield on Friday afternoon, even over the pouring rain.

And those who came, were appropriately rewarded! At the time the show started, the rain slowly disappeared, and the conditions became more acceptable. Admittedly, there were one or two, short showers during the flying display programme, and the visitors were a bit wet, while watching the show, however this was still much better than the weather expected in the forecast.

Certainly, the flying conditions were still a bit limited by the low dark clouds and the wind, forcing the display pilots to choose their limited programme. Additionally, the scheduled displays of RAF Typhoon, the Red Arrows and US Army parachute team Golden Knights had to be cancelled.

Fortunately, the Sanicole Sunset flying display programme is usually full enough to go smoothly even with some cancellations and also during the 7th edition those who arrived at the airfield were not disappointed.

The Friday show schedule offered the spectators the wide range of aircraft, from the tiny aerobatic specials, through the military jets and helicopters to the aerobatic jet teams. The special, unique formations are one of the Sanicole airshow highlights and this year the gathered audience may enjoy the formation led by Belgian F-16 fighter, followed by Patrouille Suisse F-5, Frecce Tricolori MB-339, Breitling Jet Team L-39 and Hawk T1A from Saudi Hawks.

The show started with the aerobatic display flown by one of the regular Sanicole participants – Jean-Marc d’Hulst and his Trescal Starduster biplane. The aerobatic display performance is best with the clear sky, but Jean-Marc showed he can fly a beautiful, smooth aerobatic even during the gloomy afternoon. The small Starduster was then followed by the first aerobatic team of the evening, Frecce Tricolori and their Aermacchi MB-339. Regardless the low clouds and the rain, the Italian team managed to perform a thrilling display, including as many of their standard programme as only possible.

This was the opening and then the show followed with further awesome displays – Belgian Air Force Agusta A109BA (one of the most awaited displays, and yes, that´s because of the flares), Rafale Solo Display, Breitling Jet Team and Belgian Air Force F-16 solo display (and that meant flares, a lot of flares!).

Sadly, the weather didn´t allow the Blades aerobatic team to perform their display. Unfortunately for the team, the second moment of the worst conditions during the show came with the slot reserved for the British aerobatic team. Also, the Breitling Jet Team had to limit their usual programme, flying the low clouds variant only. A flypast of Belgian C-130 Hercules, that followed the F-16 dynamic show, was the interesting addition to the aerobatic displays.

At nightfall, there was the right time for the light and pyrotechnic show flown by two British display teams – Twister Aerobatics Team and GliderFX Display Team. Both teams were widely using the possibilities offered by the LED lights in addition to the classic light effects, not only brightening the night sky but also wonderfully harmonising with the aerobatic figures they flown.

If there would be any voting among the spectators for the best display on Friday, most probably the French Rafale, flown by Jean-Guillaume ´Marty´ Martinez, would be the winner. The display flown at Sanicole during this nasty weather condition was one of the most brilliant Rafale display ever. Limited by the low clouds, Marty was flying tight, as close to the ground as possible and with the amazing vapour traces. The two Rafale Snecma M88 engines (with their afterburners on for most of the display), were glowing at the grey sky, resembling the scenes from the space opera movies.

Special attention should be also paid to the Belgian F-16 solo display. The aircraft, already well-known ´Blizzard´, and the display pilot Tom ‘Gizmo’ De Moortel are flying the last display season in 2017, with the Sanicole International Airshow scheduled as the final general public display. Needless to say, that in front of the hometown crowd and practically at his home airfield, ´Gizmo´ showed his best skills, performing the outstanding display.

Finally, the special thanks are due to all pilots, ground crews, aviation control teams and the entire air show team. They not only didn´t get scared by the weather forecast and did not cancel the show, but also secured the scheduled programme was performed smoothly, allowing the spectators at Sanicole airfield to enjoy another great edition of the Sunset Airshow. And this despite the fact, the sunset was cancelled this year.

Another update of cancellation list for the 2020 air show season, with some new announcements included. The updates to the list publshed already in two previous articles were highlighted in bold: Historic Helicopters Open Day, […]