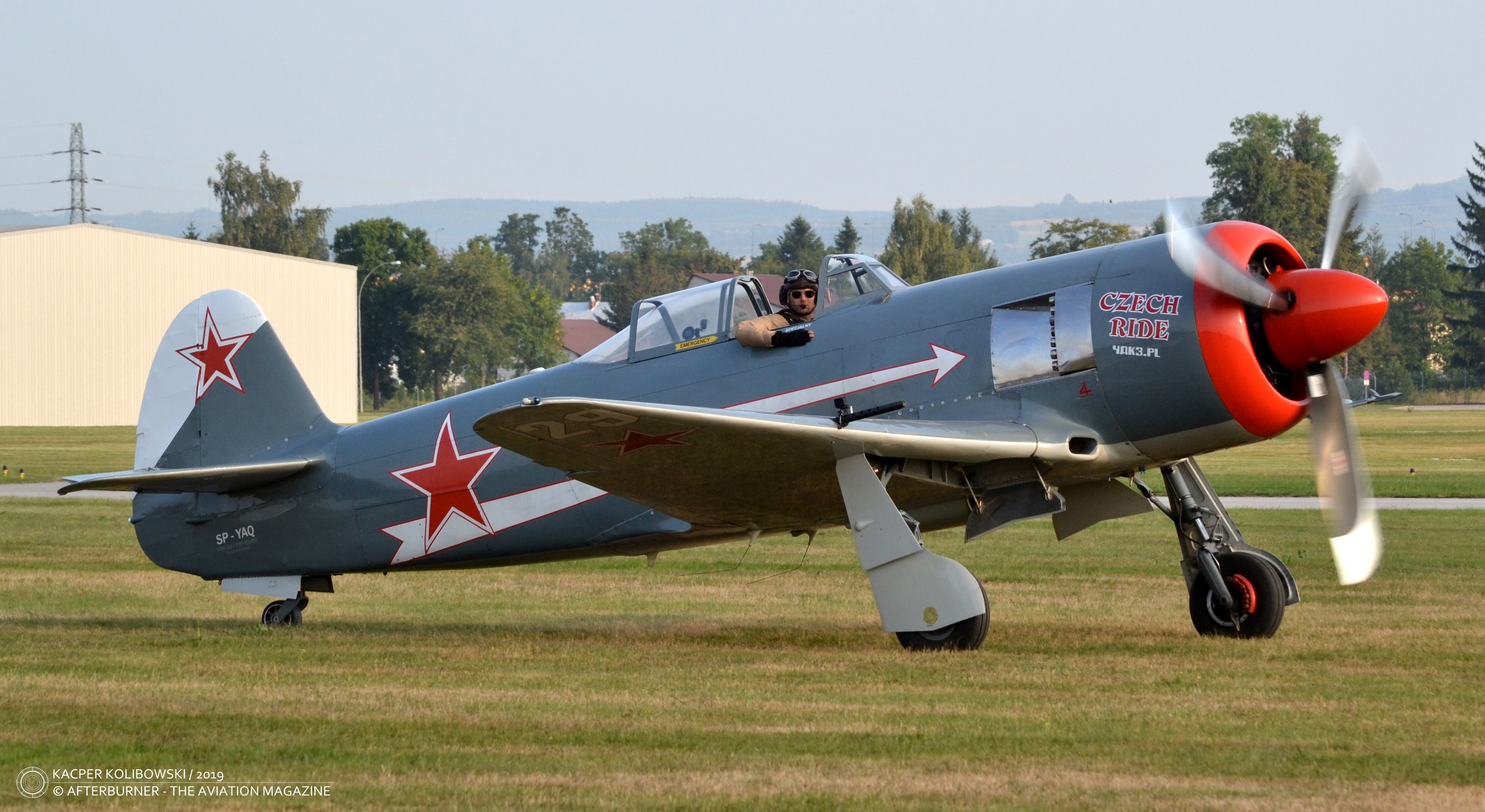 Yakovlev Yak-3U P&W R2000 (Yak-11) „Czech Ride” at the Central Air Show of 100th Anniversary of the Polish Aeroclub, an event organized on the last day of August 2019 in Rzeszów.

Yakovlev Yak-11 was a basic aircraft for advanced training used between 1947 and 1962 by the Soviet Air Force, and also by several other air forces of the Eastern Bloc, African and Asian countries. Its development began yet during the World War II and the construction was largely based on already well proven airframe of a Yak-3 fighter, respectively the prototype of Yak-3U variant, which, unlike the other versions of the Yakovlev fighter, was powered by a radial engine.

Due to its trainer role, Yak-11 had some significant changes comparing with Yak-3U, starting with the power unit – Yak-11 was powered by 7-cylinder Ash-21 engine, generating power of 700 HP, being on average twice less than power of 14-cylinder Ash-82 engine used in Yak-3U. Certainly, as an advanced training aircraft, Yak-11 was a two seater, having a longer canopy and double controls.

Having its first flight on 10th November 1945, just few months after the end of the World War II, the Yak-11 officially entered into service in 1947 and then was operated by the air forces of  Afghanistan, Albania, Algeria, Angola, Austria, Bulgaria, China, Czechoslovakia, East Germany, Egypt, Iraq, Hungary, Mongolia, North Korea, Poland, Romania, Somalia, Syria, Vietnam, Yemen and, certainly, the Soviet Union. There were 4,566 Yak-11 trainers manufactured in total.

The Yak-3U P&W R2000 „Czech Ride” was built in 1956 in the former Czechoslovakia, as the licensed LET C-11 trainer, and then operated by the Egyptian Air Force. In the 1990s, many years after it was withdrawn from the operational service, the fuselage of this very Yak was bought (together with several dozens of other Yak-11 fuselages) by a French vintage aeroplanes collector.

The “second life” for the “Czech Ride” Yakovlev trainer was given in the USA, by the famous aerobatic pilot Dan McCue, who restored the aircraft to the flying condition and in the configuration close to Yak-3U variant. Obviously, a few technical changes were necessary, and the engine and propeller were the most important ones. Both engine and propeller origins from Douglas DC-4, the engine is Pratt & Whitney R2000 Twin Wasp rated at 1450 hp.

In the USA that aeroplane was used for racing purposes, participating in the famous Reno Air Race in the 1990s, where it took the 3rd place in 1999 race. In 1990, the Yak-3U “Czech Ride” was awarded as the “Best Warbird” at Oshkosh Air Show.

In 2018 the “Czech Ride” was bought by two Polish vintage aeroplane enthusiasts, Mateusz Strama and Piotr Kowalski and transferred to Poland, since then being the regular participant of the air shows in Poland and neighbouring countries.

If you want to learn more about the history of this aircraft and its way to Poland, we recommend you to check our interview with Mateusz Strama and Piotr Kowalski, that can be found here.