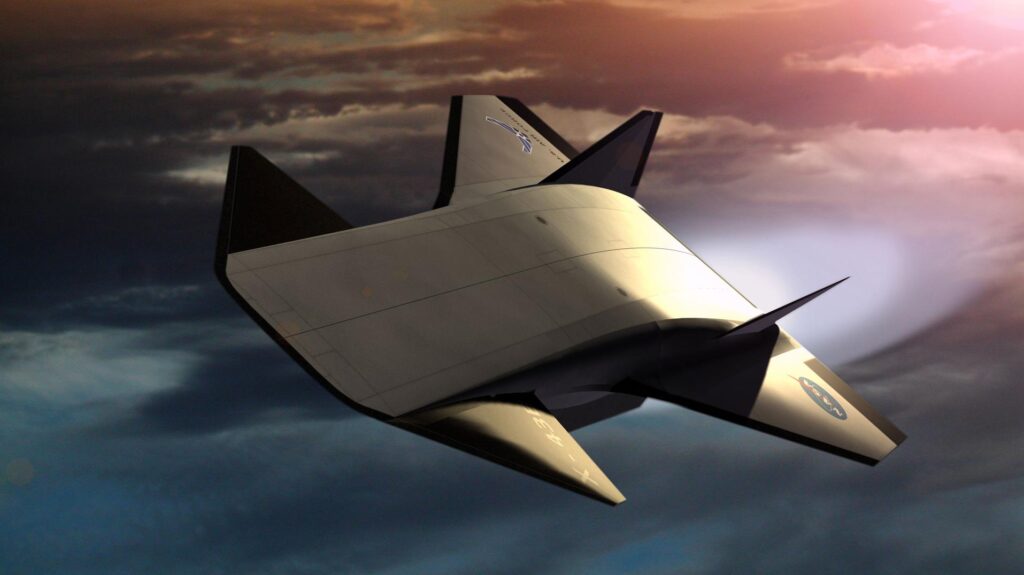 In 1947, Charles Yeager, flying the Bell X-1 rocket aircraft, broke the sound barrier and started the era of supersonic aeroplanes. Soon, the desire to fly faster and faster ruled the world. Nevertheless, development limits of a classic jet engine were discovered shortly thereafter. Nowadays, the airliners are still travelling at a subsonic speed and most military jets are not exceeding Mach 2. Reaching higher speeds turned out to be both difficult and economically not effective.

A new solution was needed, allowing the aircraft to travel at hypersonic speeds. And a supersonic combustion ramjet, commonly called a scramjet, seemed to be the one. In this type of engine, combustion takes place in supersonic airflow and at high temperatures, with thrust depending on pressure, amount of air and the time of flow.

Works on a scramjet engines began in the late 1950s and early 1960s, both in the USA and the UK. In 1964, Antonio Ferri, an Italian scientist specialising in aerodynamics, supersonic and hypersonic flights technology, demonstrated one of the first engines of that type. Yet in the same year, American scramjet pioneers – Frederick S. Billig and Gordon L. Dugger – applied for a patent for a supersonic combustion ramjet. However patent was not granted until 1981, following the cancellation of a secrecy order on the engine that year. Yet in the same year of 1981, tests of a scramjet engines began also in Australia.

The first successful test flight of a scramjet engine was a conclusion of joint efforts of Soviet and American hypersonic engineers. It was conducted over the Soviet territory in 1991, in cooperation with NASA and under the ‘Kholod’ project. That scramjet was an upgraded version of an engine designed in the 1970s by the Central Institute of Aviation Motors (CIAM) in Moscow.

The test was carried out using an SA-5 (S-200) surface-to-air missile as the carrier, with an additional experimental flight support unit, known as the ‘Hypersonic Flying Laboratory’, installed on board. Between 1992 and 1998, the CIAM conducted six more similar tests, in cooperation with NASA and France. During that series of tests, the scramjet operated for the longest time of 77 seconds and the highest speed achieved was Mach 6.4.

The early 2000s saw significant progress in the field of hypersonic flights technology and, in particular, scramjet engines. More and more research projects related to this matter began to emerge throughout the world, involving both military and civilian entities. And a project called HyShot was one of such examples.

The HyShot was a joint research project involving the University of Queensland, Australia Centre for Hypersonics and QinetiQ – a British-based multinational defence technology company. The works were focused on exploration into the development of scramjet technology by demonstrating the capabilities of supersonic combustion in flight.

Within the project, two types of combustion unit were being developed, however not designed to produce thrust. One of them was built in Australia by the University of Queensland and the other in the UK by the QinetiQ company. Both combustion units had the same launch vehicle, named  Terrier-Orion Mk.70. It was a sounding rocket, made up of the first stage of a RIM-2 Terrier surface-to-air missile and the second stage of  an Orion research rocket.

During the tests, both supersonic combustion units were launched atop the aforementioned carrier rocket on a high ballistic trajectory. After reaching an average altitude of 330 km, the Terrier-Orion rotated back towards the Earth. Then – at an altitude of between 35,000 and 23,000 metres and at a speed of about Mach 7.6 – the tested combustion unit was ignited and operated for about 6 to 10 seconds.

The first trial flight within the HyShot project was attempted as early as on 30th October 2001. However, it was not successful, as the carrier rocket went off its course. Another, test, designated HyShot II and involving a hypersonic combustion unit developed by the University of Queensland, was conducted on 30th July 2002 – and this time concluded with a success.

This time the British supersonic combustion ramjet manufactured by QinetiQ company was put to the test. Soon after the launch, the carrier rocket reached an altitude of about 315 kilometres. Then, similarly to the previous vehicle, it made a rotation towards the ground and the most important phase of the test began – the scramjet was started up for a couple of seconds. After ten minutes of flight, the rocket returned to Earth, landing about 400 kilometres away from the launch site. The mission was reported a success. After analysis of the telemetry data, it was estimated that the scramjet, if able to generate thrust, would accelerate the craft to Mach 6.5 (7962 kph).

Five days later, on 30th March 2006, another test, HyShot IV was carried out. Regrettably, this time the scramjet did not work as expected.

The Australian-British HyShot project was the first to demonstrate a supersonic combustion ramjet engine working successfully in an atmospheric test. In its direct consequence, another programme was developed, known as the Hypersonic Collaborative Australian/United States Experiment, or just HyCAUSE.

The HyCAUSE programme was a collaborative effort between the Defence Science and Technology Organisation (DSTO) of Australia and the Defense Advanced Research Projects Agency (DARPA) of the United States. The premise of that development was similar to those of the Australian-British cooperation mentioned above. However, it used a different carrier rocket, Talos-Castor, and the target speed was Mach 10. The HyCAUSE was launched on 15th June 2007 and was announced successful, reaching the assumed speed.

In the following years, further research efforts on the development of the scramjet technology were carried out. Inter alia, on 16th November 2010, researchers from the University of New South Wales and the Australian Defence Force Academy successfully demonstrated a method of ignition in a scramjet engine using a pulsed laser source.

On 28th August 2016, Indian Space Agency ISRO conducted a successful test of its two scramjet engines mounted not at the top, but at the rear section of the second stage of a two-stage solid-fuel sounding rocket called Advanced Technology Vehicle (ATV). When the carrier rocket was at an altitude of 20 km and flying at Mach 6 (7350 kph), the scramjets were started and ran flawlessly for about five seconds.

Speaking of projects related to scramjet technology and hypersonic flights, it must also be mentioned that, in addition to research on the propulsion systems using carrier rockets, development of aircraft powered by scramjet engines had also been carried at the same time.

Back in 2004, so at the time when the abovementioned Australian-British HyShot project was underway, NASA announced the first flight of a thrust-producing scramjet-powered vehicle with full aerodynamic manoeuvring surfaces. That vehicle, designated X-43A, was an experimental unmanned hypersonic aircraft being developed in the framework of NASA project known as Hyper-X. After a series of test flights, that aircraft managed to reach and briefly maintain a maximum speed of Mach 9.6.

A few years later, on 22nd May 2009 and again in Woomera, the first successful test flight of HIFiRE hypersonic aircraft took place. Among several participants involved in the project, officially known as the Hypersonic International Flight Research Experimentation, there were the Defence Science and Technology Organisation, the Air Force Research Laboratory, DARPA, Boeing and Pratt & Whitney.

The main purpose of the HIFiRE programme was to design, and further develop, of another unmanned hypersonic aircraft being a direct successor to the X-43. Work on the new scramjet-powered aeroplane, which was given the official designation Boeing X-51, began in 2006.

Four years later, on 26th May 2010, the HIFiRE successfully made its first powered flight. In the following years, three more test flights were carried out, but two of them were not successful due to technical problems and ended with the aircraft crashing into the ocean.

The last test flight of the Boeing X-51 took place on 1st May 2013 and this time was a complete success. During that trial, which lasted more than six minutes in total, the aircraft reached the maximum speed of Mach 5.1 (5,400 kph), maintaining it for 210 seconds. Then, after running out of fuel, it landed in the waters of the Pacific Ocean.

Other significant successful tests of scramjet demonstration aircraft were performed on 12th June 2019 – Hypersonic Technology Demonstrator Vehicle of India, and then on 27th September 2021 – Hypersonic Air-breathing Weapon Concept by DARPA.

Although the concept of the scramjet engine and hypersonic aircraft originated decades ago and is still being developed ever since, it seems that we have to wait probably several decades until aircraft of this type would become an everyday reality. Nevertheless, development works on scramjet engines and hypersonic aeroplanes are continued in many countries and the vision of covering transcontinental distances – as for example, the twenty-hour-route from Sydney to London – in a time even ten times shorter than today, makes it definitely worth waiting for.

Cover photo: An artist’s rendering of the air-breathing, hypersonic X-43B, the third and largest of NASA’s Hyper-X series flight demonstrators. Revolutionizing the way we gain access to space is NASA’s primary goal for the Hypersonic Investment Area, managed for NASA by the Advanced Space Transportation Program at the Marshall Space Flight Center in Huntsville, Alabama. These technology demonstrators, are expected to yield a new generation of vehicles that routinely fly about 100,000 feet above Earth’s surface and reach sustained speeds in excess of Mach 5 (3,750 mph), the point at which “supersonic” flight becomes “hypersonic” flight. National Aeronautics and Space Administration image, 0202375.

Japanese air raid on Darwin, being both the first and largest air attack on Australia. At that time the city of Darwin was not only a capital of the Northern Territory but also – despite […]