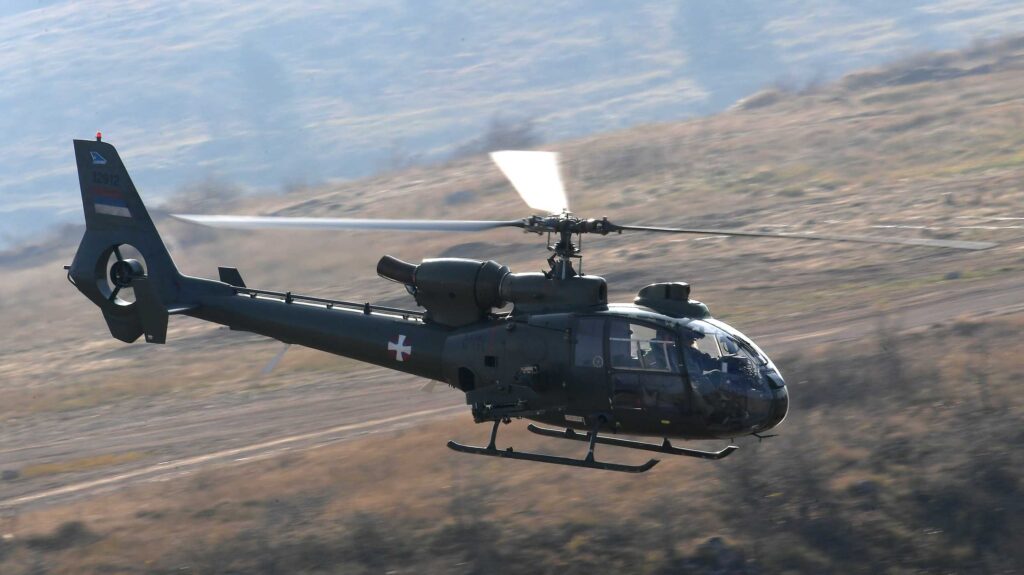 For a number of years, Aérospatiale Gazelle was a well-known icon of the French helicopter industry. Designed and developed in the late 1960s, as a successor of Alouette rotorcraft family, the Gazelle was widely used by approximately twenty five military operators in Europe, Africa, Asia and South America.

The rotorcraft received an official designation SA 340, dating back to the years of Sud Aviation company that in 1966 launched works on a new French light helicopter. In 1970, it merged with Nord Aviation and SÉREB, creating a new entity named Aérospatiale. Then, the French aviation manufacturer went through several acquisitions and merges, finally leading to establishment of Airbus Helicopters.

The first prototype of the Gazelle performed its maiden flight on 7th April 1967. The helicopter was significantly different from the final product and reportedly was still equipped with a classic tail rotor. Nevertheless, the SA 341 variant – that appeared in 1971 and eventually became the serial-manufactured one – was the first helicopter in the world featuring a fantail. That solution, commonly known as Fenestron (although that term is a registered trademark of Airbus Helicopters), meant a replacement of the classic tail rotor by an enclosed ducted fan, integrally housed within a tailboom.

In 1973, the Gazelle officially had entered active service within the French Army Light Aviation (Aviation légère de l’armée de Terre / ALAT). The helicopter quickly became a popular light multi-purpose military rotorcraft, used for transport, reconnaissance, scout and attack operations. It also has an impressive combat history because the Gazelles were not only being intensively deployed by the French Army during several miliary interventions all over the world but were also being used in the Iran-Iraq war, the Lebanon War, the Gulf War, the so-called Alto Cenepa War between Ecuador and Peru, conflicts in Balkans, Rwanda Civil War and many others.

The commercial success of the Gazelle was an impulse to continue with further development of the helicopter. As an example, the SA 342 variant featured a more powerful engine and improved fantail, the SA 342K was a specialized version for hot and dry climate and the SA 342M became a French Army anti-tank variant equipped with HOT missiles.

The Gazelles were manufactured in France and in the United Kingdom (by Westland), license rights were sold to Yugoslavia (SOKO) and Egypt (Arab British Helicopter Company). A total number of manufactured helicopters, in all variants, exceeds 1,700 examples. Serial production of that rotorcraft was finally ceased in 1996.

Nevertheless, the Aérospatiale Gazelle is still in active service with approximately fifteen military operators and is undergoing gradual modernization. Certainly, the ALAT remains the most important user, with an inventory of about eighty Gazelles (although successively being replaced by newer designs). Apart from France, that helicopter is still being used by the British Army Air Corps, the Serbian Air Force and Air Service, the Serbian police and the Bosnian and Herzegovinian Air Force.

In the former Yugoslavia, the license was supervised and managed by Aeronautical Technical Institute (Ваздухопловнотехнички институт), the helicopter was finally assembled at SOKO aviation plant in Mostar, engines were produced by ´21st May´ factory in Rakovica and other elements were manufactured and delivered by other Yugoslavian companies.

The license rights were acquired by Yugoslavia in 1971, but first twenty one examples of the Gazelle SA 341G helicopters were made yet in France and just assembled in Yugoslavia. Then, starting 1978, the full domestic production of the G and H variants was launched in Mostar.

The Gazelle was equipped with four 9M14M Malyutka, wire-guided anti-tank missiles developed in the Soviet Union, as well as two 9K32 Strela-2M missiles – originally being a MANPADS system of the same origin but here intended for anti-helicopter combat. Those rotorcraft were manufactured in two variants and designated, depending on base variant of the Gazelle, HN-42M Gama (for the SA 341H) and HN-45M Gama 2 (for the SA 342L). Their common name ´Gama´ was derived from abbreviation of Gazelle and Malyutka.

Speaking of total number of the Yugoslavian Gazelles, it can vary from 178 to 193, depending on the source.

The SOKO-manufactured helicopters were widely used in combat during the Yugoslavian Wars. On 27th June 1991, a Gazelle was shot down near Ljubljana and therefore became the first aircraft lost in that series of conflicts. After the breakup of Yugoslavia, the remaining rotorcraft were split among successor states. However, only Serbia and Bosnia and Hercegovina are still keeping them airworthy to this day.

Nowadays, the Serbian Air Force and Air Defence have approximately thirty examples of the Gazelle helicopter in active service, mostly the ´Gama´ anti-armour variants. A few other Gazelles are operated by the Serbian police, although they now are being successively replaced by Airbus H145.

A few weeks ago, one almost unbelievable news was spread over the internet and surprised the aviation world – the Republic of Serbia is going to take J-22 Orao attack aircraft out from the aviation […]

A live-fire and large-scale military exercise codenamed ´Joint Action 2020´ (Sadejstvo 2020 / Садејство 2020)  is carried out today, on Saturday 10th October, in Serbia. The exercise is organized at the temporary exercise area Pešter, […]

Russian Helicopters holding company has just announced that a modernized Ka-32A11M fire-fighting helicopter is going to be presented at the International Aviation and Space Salon MAKS-2021. The scope of K-32 modernization includes a glass cockpit […]