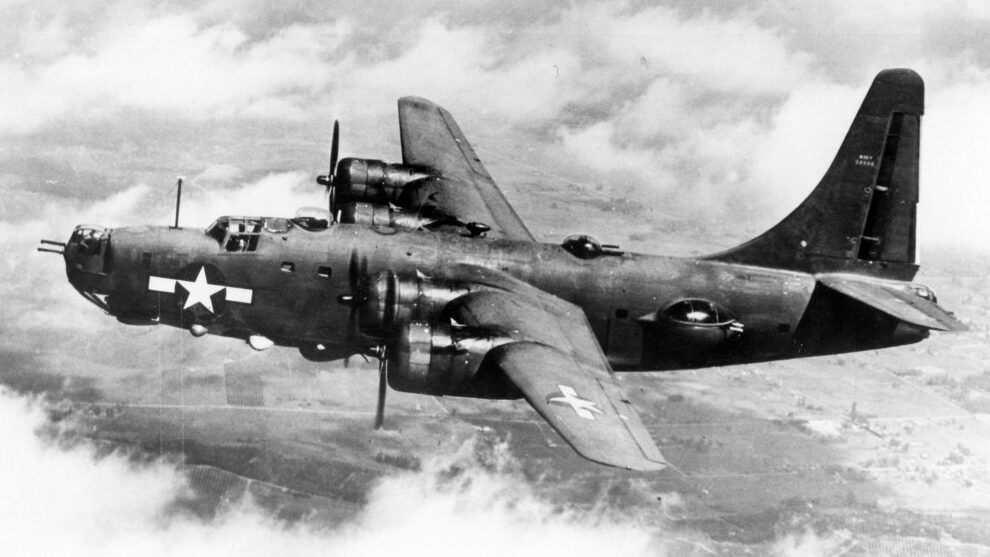 On 8th April 1950, four Lavochkin La-11 fighters intercepted a US Navy aircraft, performing signal intelligence (SIGNIT) mission off the Soviet coast of the Baltic Sea. That aircraft, a Consolidated PB4Y-2 Privateer, was shot down with all ten members of its crew lost.

The PB4Y-2 Privateer was a maritime patrol and bomber aircraft, derived from Consolidated B-24 Liberator. The aeroplane was introduced into service at the end of 1944 and was based on experiences gained from operational service of naval variants of the Liberator, used by the US Navy and the RAF. The Privateer was a fully navalised aeroplane, with single vertical stabilizer (instead of twin tail configuration used with the B-24) and an additional crew member, the flight engineer.

The Privateers were used during the final stage of the World War II, then also in the Korean War, flying the so-called ´Firefly´ night illumination missions. Some aircraft of that type were also delivered to the French naval aviation and used as bombers during the Indochina War.

With the onset of Cold War, a new role appeared for the Privateers of the US Navy. They started to be used for electronic reconnaissance and SIGINT missions, flying off coasts of the Soviet Union and China.

On 8th April 1950, the PB4Y-2 ´Turbulent Turtle´ of the Patrol Squadron 26 (VP-26) took-off from Wiesbaden in West Germany and headed to the Baltic Sea. In the vicinity of Liepāja (now in Latvia) the Privateer was intercepted by a formation of Soviet La-11 fighters and shot down.

Obviously, in connection with that incident both the Soviet Union and the United States released significantly different information and commentary.

An official Soviet version stated the US Navy aircraft violated airspace of the Soviet Union. As a consequence, fighter aircraft were assigned the task of intercepting the Privateer and force the crew to land on a Soviet airfield. Regrettably, the PB4Y-2 did not just ignore the signals given by the La-11 pilots, but also opened fire on them. Thus, it was shot down and there were no survivors.

Initially, the US government claimed the Privateer was performing a usual training flight within the international airspace and was attacked by the Soviet fighters for no reason. The fact it was in actuality the SIGINT mission, was acknowledged as late as in the mid-1970s.

Moreover, the US authorities emphasized the PB4Y-2 was armed with only one machine gun and entering any air battle with four fighters was merely irrational. In addition, there was a suspicion that some of the crew members could survive and were imprisoned somewhere deep in the Soviet territory.

Certainly, search and rescue operation was launched immediately when contact with Privateer was lost. Regrettably all that was found were two lifeboats and some wreckage parts recovered by Swedish fishermen. There was no trace of any of the ten crew members.

For years to come, due to tense relations between the two superpowers, there was no chance of explaining what really happened that day. Many hypotheses appeared, as well as not confirmed rumours related to potential survivors. Each of them caused the American authorities repeatedly accused the Soviet Union of imprisoning the Privateer crew, but all such charges were being continuously denied by the Soviet side.

Some secrets began being revealed in the 1990s, when the 40-year Cold War beginning to thaw. American investigators could finally reach some Soviet documents and even the La-11 pilots directly involved in the incident. Regrettably, none of them could confirm the final fate of the Privateer and its crew. The Soviet pilots all said that after being fired at, the Privateer dived into the clouds and they lost sight of it. According to them, the ´Turbulent Turtle´ probably ditched into the sea and there were no survivors. In addition, the US team was quite surprised that most of the official Soviet reports related with the case were destroyed yet in the 1950s. All that left were short and vague statements, contributing nothing.

In 1992, the investigating team released an official statement closing the case. The conclusion was that there are not enough information to say with confidence about the final fate of the US Navy Privateer and its crew. The Soviet documents were either destroyed or still confidential and there were no eyewitnesses apart from the La-11 pilots, whom statements were too vague to make any conclusions. Although some of the crew could survive the crash, there was no evidence to support that theory.

However, when some of the La-11 pilots were occasionally interviewed by the press in following years, they started to spread some surprising news related to the PB4Y-2 and its crew. According to them, the US Navy aircraft had either to explode in mid-air, crashed on the Soviet territory or ditched into the sea. Moreover, the wreckage was reportedly recovered and investigated by the intelligence, while the crew was imprisoned somewhere inside the country.

Nevertheless, all abovementioned theories seem to appear only in order to attract attention and give the retired pilots a moment of fame. Furthermore, they usually were in contradiction with each other. Today, after more than seventy years from that incident, the final fate of the Privateer crew still remains a mystery.

The ´Turbulent Turtle´ became the first ever intelligence aircraft that was shot down by the Soviet Union during the Cold War years. The event of 8th April 1950 was also the first air victory achieved by the Lavochkin La-11 fighter aircraft.