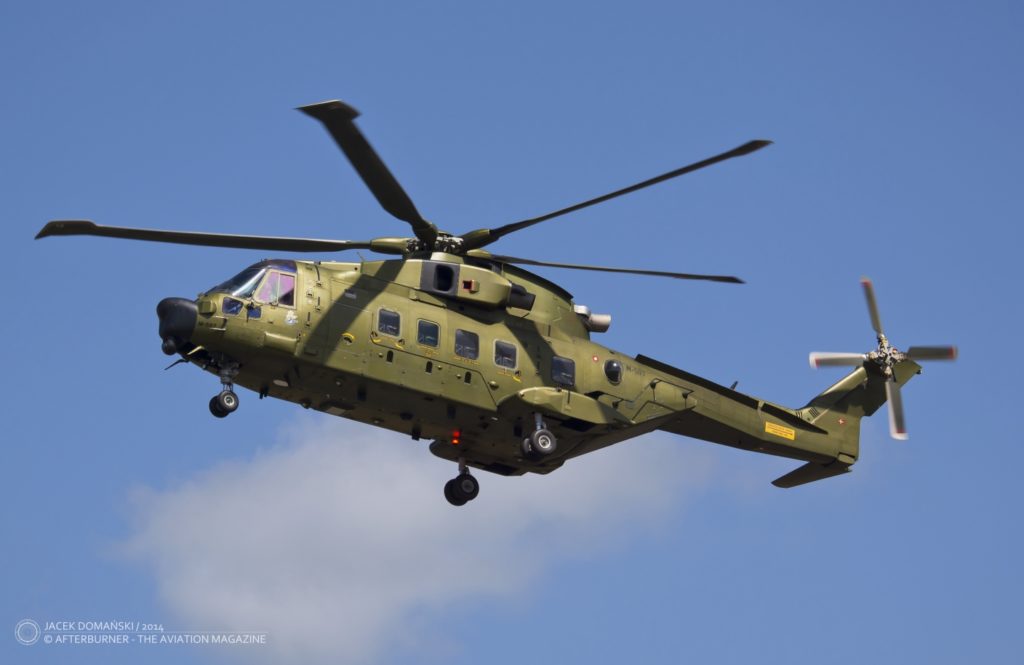 Karup air base, the home of Helicopter Wing, is located in Midtjylland region, on the Jutland peninsula. An airfield was built there in 1940, during the years of German occupation and was then called ´Fliegerhorst Grove´. Nowadays, Karup is the primary and biggest facility of RDAF and the military aircraft are sharing the runways with Midtjyllands Airport.

The Danish Air Show itself is a one-day event, organized usually on Sunday. As an addition to the regular air show, a Spotter Day is held on Saturday, but for limited number of aviation enthusiasts (approximately 250 spotters). The Spotter Day offers a perfect opportunity to see the show from the background, preparation of its static exhibition, some rehearsals and arrivals.

This year, the lucky spotters who arrived to Karup on Saturday, can enjoy the perfect weather and light allowing them to take many interesting pictures. A relatively cold, but sunny day, with some nice clouds in the background – all together created the excellent conditions to enjoy the day at the air base. As most of the aircraft on the static display were still not encircled with fences, there was a possibility for a clear shot. Many pilots and ground crews were present in the display area, providing the opportunity to talk with them and take a few photos.

Apart from following the preparations for the 2014 Danish Air Show, the aviation enthusiasts could enjoy an additional feature of air base tours, organized by the RDAF. Those excursions were including a visit of Helicopter Wing area and its hangars, a trip to Flyveskolen training facilities and a tour around the base hangars, where military display teams participating in the show were located.

Without any doubts, that ´hangar tour´ was a great experience, as it offered the opportunity to see up close F/A-18C Hornet (Finnish Air Force), JAS-39 Gripen (Swedish Air Force) and F/A-18E Super Hornet (US Navy / Boeing). Especially happy was the group that arrived to the American hangar at the moment the US Navy / Boeing team started their preparation and checks before the Super Hornet flying display. The spotters were able to witness the complete pre-flight procedure, rolling-out the F-18 from the hangar, engine test and then taxiing for the rehearsal light.

At this point, the perfect organization of the Spotter Day and the hospitality of the Royal Danish Air Force must be mentioned. The air base personnel really did the perfect job, allowing the aviation enthusiasts to fully enjoy that day at Karup.

The main event, Danish Air Show, and its concept is usually advertised as a great family day at the airfield, focused on showing the existing and future equipment of the RDAF, the skills of air force pilots and make the public familiar with the tasks and organization of the Danish armed forces. Obviously, the RDAF was the biggest participant of both static and flying displays – the visitors to the event could enjoy a solo display of F-16 fighter, C-130 Hercules performing a great flare show, Helicopter Wing displays including Lynx, Fennec and Merlin rotorcraft, T-17 Supporter aerobatic team and two performances of F-16 formations: diamond formation flypast and a tactical display.

The date of Danish Air Show 2014 coincided in time with uncertainty about the Joint Strike Fighter development and the Danish participation in that programme. Just two months before the show, the Danish Ministry of Defence issued the Request for Binding Information (RBI), addressed to four aviation manufacturers. This was observed as a significant step on the way leading to replace quickly ageing fleet of RDAF F-16 fighters. And although back in 2002 Denmark decided to participate in F-35 development, joining the programme at the System Development and Demonstration phase, in 2014 the future of new fighter was still unsure, therefore forcing the Danish Ministry of Defence to look for possible alternatives.

(This report was written in 2014, a few weeks after the Danish Air Show took place. Now, in 2020, we already know that Denmark finally decided to continue its participation in the JSF programme, and the first Danish F-35 Lightning II fighters are expected to arrive in 2021. But then, in the summer of 2014, all questions related to the future Danish fighter jet were still open.)

As an obvious outgrowth of the RBI, all four aviation companies participated in the Danish Air Show with the goal to sell themselves, and then their products, to Danish authorities and public opinion. The visitors to the air show can see the flying displays of F-18 Hornet and Super Hornet, JAS-39 Gripen and Eurofighter Typhoon. At the static display there was a full-scale mock-up of F-35 Lightning II, several British and Italian EF 2000 Typhoons were exhibited together with another mock-up, and two JAS-39s were also present at static display in Karup.

In addition, all those aviation manufacturing companies had there their promotional stands. The most visited one, and always crowded, was the Lockheed-Martin tent, where the visitors can get more familiar with high-tech elements of the JSF programme, including the F-35 cockpit demonstrator and advanced pilot´s helmet.

Besides the above mentioned flying shows of aircraft applying for being the future Danish fighter and the RDAF performances, the dynamic displays at Karup were also performed by several domestic and international guests. The spectators could enjoy a solo display performed by L-159 ALCA of the Czech Air Force, Bo-105 helicopter, Fouga Magister, Antonov An-2, L-29 Delphin, Piper Club and others. Traditionally, there were a few aerobatic teams participating in the event, including RAF Red Arrows, RDAF Baby Blue, Red Devils from Belgium and Biało-Czerwone Iskry from Poland.

At the static display a broad offer of fighter, transport and training aircraft could be seen. Starting from the already mentioned Hungarian and Swedish JAS-39 Gripens, three British and one Italian EF 2000, then Serbian An-26, Polish CASA C-295M, C-130 Hercules, Bae Hawk and many, many others.

More than 130,000 visitors arrived to Karup that sunny, summer Sunday, and they certainly were not bored. The flying programme was attractive and full of dynamic displays, being accompanied by the huge static display of aircraft, additional exhibition of the ground forces and a few side events.

The next edition of the Danish Air Show will take place in 2016 and the event will be hosted by the Fighter Wing Skrydstrup. Then, the 2018 edition is going to be organized by Transport Wing Aalborg. The Danish Air Show should return to Karup in 2020. (And we already know, that the Danish Air Show 2020 was cancelled due to the coronavirus precautions. The air show in Karup air base was postponed to 20th June 2021.)