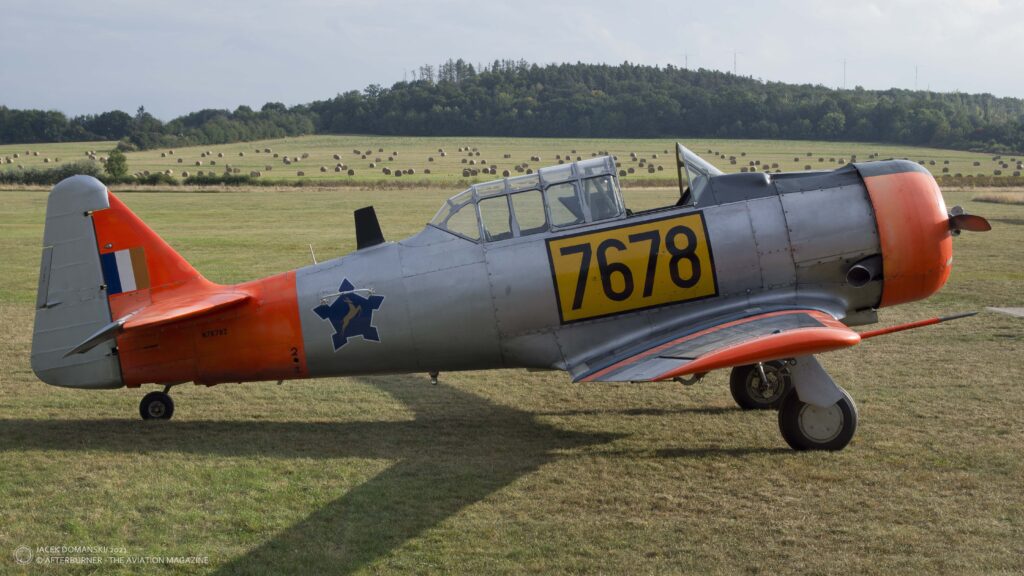 On 11th September, hangar doors at Točna airfield have finally opened for the broad public again. It was a perfect opportunity for aviation enthusiasts and local citizens to become more familiar with collection of historic aircraft based there, owned and maintained by a group of aviation devotees gathered around the Točna airfield.

The gates at Točna have already opened for the third time during this year. Although such events are held at that airport on regular basis, there was a quite long break caused by coronavirus outbreak and restrictions that followed. Eventually, the open days at Točna have returned again in the second half of 2021. This year´s first edition was held on 10th July and then another on 14th August.

Aviation days at the Točna airfield are not organized following a traditional air show concept. The idea behind is to present the collection of historical aircraft to general public and to provide information about the aeroplanes and their history. Certainly, the flying displays are also a part of the event, but usually they are not being officially announced and rather being dependent on actual weather conditions and availability of crews and aircraft.

It is important to mention that usually each open day at Točna is organized around a particular topic, emphasizing an event from aviation history, or introducing an aircraft from the collection. The first edition in July was focused on the newest addition to the collection – Hawker Hurricane Mk.IV, that arrived to Prague in the middle of June 2021. The event organized in August celebrated the 85th anniversary of the oldest aircraft in the hangar, Waco YKS-6.

In addition to the Točna collection, other historical aircraft are usually visiting the airfield during the open doors days and therefore broadening the  of aeroplanes presented there. During the past editions, visitors were able to see DHC2 Beaver, CASA 1.131E Jungmann, Bücker Bü 133 Jungmeister, Auster 6A, Aero Ae 145 and many other interesting aircraft.

The September edition was focused on celebration of the 105th anniversary of the birth of Karel Kuttelwascher – a Czech fighter pilot and a flying ace of the Royal Air Force. In 1939, when Germany occupied Czechoslovakia, Kuttelwascher escaped to Poland and then to France. He participated in the Battle of France and after the armistice made his way to the United Kingdom and joined the RAF.

After completing his training as a Hurricane pilot, Kuttelwascher was assigned to No. 1 Squadron and took part in the final stage of the Battle of Britain. In 1942, his squadron was assigned a new role of flying night intruder missions over France. Kuttelwascher happened to be exceptionally talented for that kind of combat. Flying a Hurricane Mk.IIC (BE581, JX-C), he achieved the greatest number of air victories among all night intruders of the RAF.

Additionally, Kuttelwascher was the most successful Czechoslovak pilot in the RAF, with 18 confirmed victories scored until the end of the World War II. He also managed to shot down a few other enemy aircraft during his French service but regrettably there is no official evidence to confirm the exact number.

And so it was no surprise that the main highlight of the event organized at Točna in September was exactly a Hawker Hurricane fighter. The aircraft, being the newest addition to the collection, was acquired in Belgium and – after reconstruction – received a livery of Kuttelwascher ´s JX-C, or more precisely, in a standard day-time variant of the Hurricane camouflage used in the RAF. The choice of such livery was a conscious decision, aimed at commemorating all Czechoslovak pilots flying in the RAF during the Battle of Britain.

Together with the commemoration aircraft, a few of Kuttelwascher´s personal items were exhibited in the hangar. The visitors to the airfield could learn the story of the most successful Czechoslovak pilot in the RAF and, thanks to a group of reenactors, get familiar with some equipment and uniforms used by the British pilots during the war.

The atmosphere of the Battle of Britain era was greatly emphasized by a pair of de Havilland DH.82 Tiger Moth trainers. Introduced into operational service in 1932, Tiger Moth became the main primary training aircraft of the RAF for nearly three decades. Thousands of future military pilots began their career with DH.82, as it was the main type of aircraft used within the Commonwealth Air Training Plan.

The Tiger Moths 82536 (N-9503, 39) and 83105 (R-5246, 40) arrived to Točna from Podhořany airfield where they are usually being based, forming a part of the RAF Station Czechoslovakia collection. During the event, those little biplanes were available at the static display arranged in the hangar.

While departing home, the pair of DH.82 performed a short but beautiful flying display. Nevertheless, it was a great pleasure to watch the crews during pre-flight preparations – especially that they were wearing the RAF uniforms from the era – and then see those biplanes taxiing and taking-off in a formation.

Another iconic trainer presented during the open day was AT-6C Harvard from the collection based at Točna. Used by the USAAF, the US Navy, the RAF and air forces of many Commonwealth countries, the T-6 Texan (also known as AT-6, SNJ or Harvard, depending on its operator) was a popular military training aircraft that remained in active service until the 1970s. Then it became a no-less popular warbird, that could be also seen in many movies, playing a role of a real combat aeroplane.

The aircraft based at Točna was manufactured in 1942 for the US Navy, as SNJ-4. In 1952, the aeroplane was converted into Harvard version and sold to the South African Air Force.

Although it seems incredible, the SAAF operated its Harvards until the mid-1990, mostly due to an embargo on buying another training aircraft, caused by the South African internal policy. Then most of them, still being in an airworthy condition, were bought by aviation enthusiasts all over the world.

And that´s exactly how that AT-6 has found its way to Točna, acquired in 2016 from an American owner. It is worth to mention, that the Harvard is still flying with its original South African markings, exactly as it was operated by the SAAF – just, according to information mentioned at the Točna collection web site, its orange paint was restored in 2005.

During the open day, the AT-6 was available at static display, exhibited outside the hangar. The Harvard have also performed a spectacular flying display – flown by Radim Vojta – that concluded the event at Točna. That aircraft, in a hands of experienced pilot, easily proved that it was designed for combat training – no wonder that spectators at the airfield awarded Vojta with a round of applause.

Another unique flying display was performed by Lockheed Electra L-10A, a twin-engine American passenger aircraft from the 1930s. Despite being designed as a light airliner, Electra became also a popular private aeroplane, owned by many entrepreneurs and famous pilots (including Amelia Earhart). It was no different in the interwar Czechoslovakia, with two Electras owned by Jan Antonín Baťa – a Czech shoe manufacturer and a half-brother of legendary entrepreneur and visionary Tomáš Baťa.

The Electra with c/n 1901, is exactly one of the two initially owned by Baťa. It was purchased from an American owner, carefully restored into airworthy condition and eventually, in 2015, flown back to the Czech Republic via the North Atlantic route. The aircraft being a part of the Točna collection is not only a part of the Czech aviation heritage but, apparently, is also the sole flying L-10A in the world.

In addition, the visitors to Točna had a possibility to buy aviation souvenirs related to the exhibited aeroplanes, meet the pilots and aircraft owners and learn interesting facts from aviation history.

In conclusion, it should be emphasized that open doors days of the Točna hangar are organised exclusively and fully financed by aviation enthusiasts associated in the Točna airfield. The next edition of the open day event is scheduled for 9th October, so if you will be anywhere near, visiting Točna is highly recommended.

The airfield is available by Prague public transport, as it is located within a 30-minute walk from a bus-stop. There is a small parking lot there, but usually crowded during the open days, so arriving by car is rather optional. A large and well-equipped playground for children is also available at the airfield, open for its visitors every day of the year.

On 9th June 2018, the gates of sixteen military facilities belonging to the German armed forces opened for general public, within the fourth edition of Tag der Bundeswehr – an annual open-doors event organized by […]