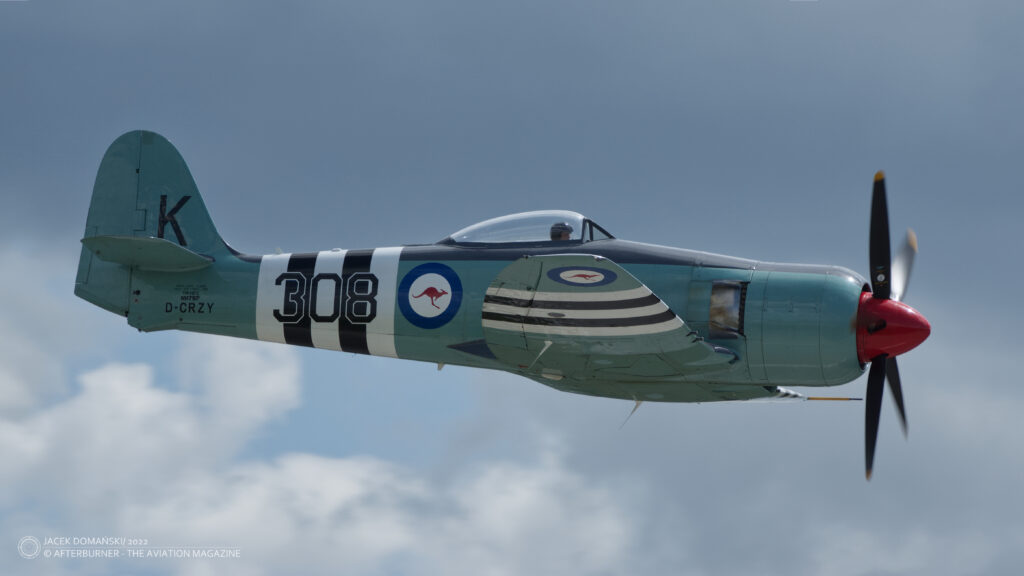 Hawker Sea Fury was the last propeller-driven fighter developed by Sydney Camm – one of the most-known British aircraft designers who created famous World War II fighters, such as Fury (biplane) Hurricane, Typhoon and Tempest. Camm´s aircraft were a backbone of the British fighter aviation of the 1930s. Wikipedia indicates there once was a time when 84 percent of the aircraft operated by the Royal Air Force were designed by Sydney Camm and made by Hawker aviation company.

Over the years, Camm´s fighters became faster, bigger and heavier – from the tiny Fury with a take-off weight of just approximately 3,600 lb (1,630 kg), through the Hurricane and its 8,710 lb (3,951 kg) to the Tempest with 13,500 lb (6,100 kg). Consequently, the latter was usually considered too heavy and oversized for most of the fighter duties, nevertheless being an exceptional interceptor and fighter-bomber.

Therefore, at the end of 1942, Camm began works on designing a lighter variant of the Tempest which he named ´Centaurus´ or ´Tempest Light Fighter´. His efforts were noted by the Air Ministry and resulted in official requirement stated in Specification F.2/42, issued in January of 1943. It meant that the project of ´Light Tempest´ was considered promising by the British military authorities and in 1944, upon agreeing on its detailed characteristics, received an official designation of ´Fury´ and ´Sea Fury´, for the RAF and the Royal Navy, respectively.

A total number of six prototypes was built, powered by different engines – Rolls-Royce Griffon, Bristol Centaurus XII and Centaurus XXII, as well as Napier Sabre IV (later Sabre VII). On 1st September 1944, the first prototype of Fury made its first flight. Both classic and naval variants were then developed together.

Nevertheless, faced with the end of the World War II and implementing its first jet-powered aircraft, the RAF officially cancelled its order for the Fury fighter. Therefore, Hawker focused on further development of the Sea Fury variant. The Royal Navy and its Fleet Air Arm were still operating a large number of Supermarine Seafire and Vought F4U Corsair carrier fighters that needed to be soon succeeded by a new aircraft.

The first prototype of Sea Fury performed its maiden flight on 21st February 1945. The aeroplane was powered by Centaurus XII engine, equipped with a tailhook but still lacked one of the most important features of a deck fighter, a possibility to fold its wing for storage. This was implemented with the second prototype that took-off for the first time in October of 1945, powered by Centaurus XV. Based on further evaluation of that prototype, the Royal Navy had ordered the first batch of 200 aircraft.

The first serial Sea Fury F Mk.X (later designated Sea Fury F.10) was ready in September of the next year and officially, the aircraft was introduced for operational service on 31st July 1947. Until 1952, a total number of 615 Sea Furies was delivered to the Royal Navy. Most of them were of the second, modified variant designated Sea Fury Mk.11 (later FB.11), but there were also sixty trainers known as T.20.

Apart from the Royal Navy, the Sea Furies were acquired by a few foreign operators, including those that did not have any aircraft carriers. The first order came from the Royal Netherland Navy, then some were acquired by Australia, Canada, Pakistan, Iraq and West Germany. After their retirement from the Fleet Air Arm, the Sea Furies were sold to Burma and Cuba.

The Hawker Sea Fury has an interesting and long combat history. British and Australian aircraft of that type were intensively used during the Korean War, primarily as the ground-attack aircraft, operating from both aircraft carriers and land bases.

The Burmese Sea Furies were used as counter-insurgency aircraft, the same as the Dutch ones. The Revolutionary Air Force of Cuba operated the Sea Fury against the US Navy during the Bay of Pigs Invasion. Iraq used its aircraft, commonly known as ´Baghdad Furies´, during the Arab-Israeli War of 1948 and Kurdish uprisings.

The pictured Hawker Sea Fury FB.11 was one of highlights of the 30th anniversary edition of the Aviation Fair air show, held in Pardubice, Czech Republic. That aircraft was, most probably, initially made for the Royal Navy and received service number WJ298. In 1952, it was sold to Iraq, where it flew as ´308´ (or ´303´, according to some sources).

In 1979, the aircraft was recovered from Iraq by Ed Jurist and David Tallichet and later restored to airworthy condition, with use of several parts retrieved from other Iraqi Furies. Then, as it usually happens with warbirds, the aircraft changed its owners several times. Since 1984, that Sea Fury is wearing the Royal Australian Navy markings.

Currently, the aircraft is being based in Italy and owned by well-known Italian aerobatic pilot, Stefano Landi.

And this is our fourth news with updates and information related to this year´s air show season in Europe. First of all, the sad information about Tag der Bundeswehr 2022 that we have already shared […]

With just seven editions, the Sanicole Sunset Airshow is still the younger brother of the well-known Sanicole International Airshow which celebrated its 40th anniversary in 2017. Despite this young age, the sunset show already gathered […]