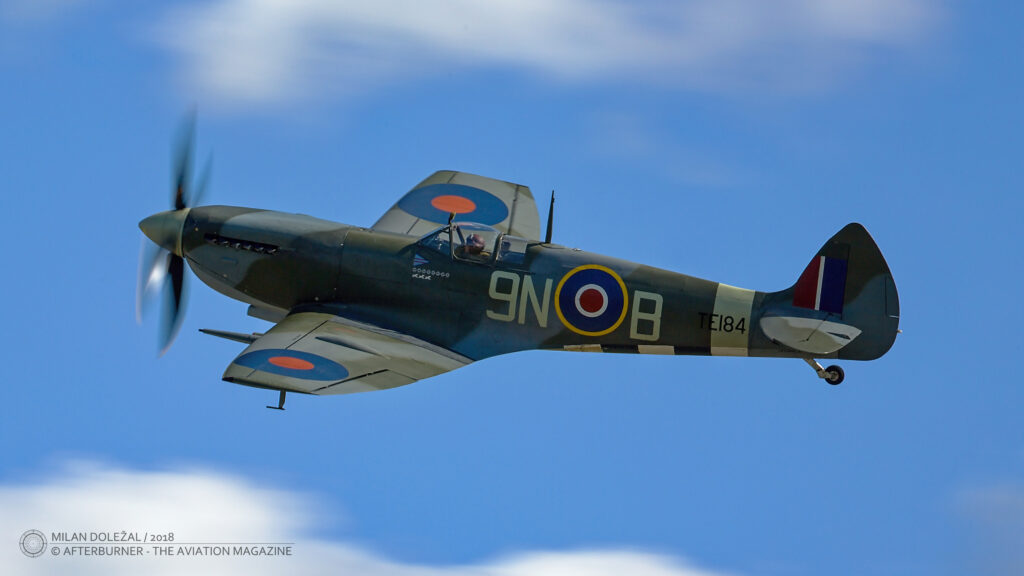 On the 1st April 1954, a Spitfire Mk. XIX of the No. 81 Squadron RAF performed the last operational sortie of that type of aircraft within the RAF. That final flight was a reconnaissance mission flown from Singapore, during the Malayan Emergency.

The Supermarine Spitfire, a legendary fighter aircraft and one of the iconic aeroplanes of the World War II, entered operational service on 4th August 1938. On that day, the first aircraft of that type – in Mark I variant – arrived to No. 19 Squadron RAF at Duxford. However, the aeroplane was for the first time disclosed to general public almost a year later, during Empire Air Day held on 20th May 1939.

An interesting fact is that its official premiere was concluded with a belly landing. Sergeant J.A. Potter from the abovementioned No. 19 Sqn, who was the display pilot on that day, merely forgot to lower the undercarriage due to being stressed out from his public performance. Potter was then fined 5 GBP for that landing, nevertheless he was not the only one. Forgetting to lower the landing gear was a quite often mistake in the days when modern aircraft with retractable undercarriage were being introduced into service.

Generally speaking, introducing a new fighter aircraft was not easy. A total of thirty-six Spitfires were written off until the outbreak of the World War II, due to accidents related to training flights.

On 3rd September 1939, the RAF inventory included approximately 400 Spitfires and another 2,000 were already ordered and in production.

The first combat activity of the Spitfire was officially recorded yet on 6th September 1939. Oddly, the first air battle that involved Spitfires was a classic example of a friendly-fire. Due to a radar failure, at least four RAF squadrons scrambled to intercept non-existing German aircraft. While searching the enemy, the Spitfires from No. 74 Sqn mistakenly engaged with Hurricanes from No. 151 Sqn and… the score was two to nothing for the Spitfire.

Regrettably, that dogfight concluded with death of Hurricane pilot, P/O Montague Hulton-Harrop. He became the first British pilot killed in the World War II and that unfortunate incident was later known as the Battle of Barking Creek.

The first air victory over the Luftwaffe aircraft was reported more than a month later. On 16th October 1939, the Spitfires from No. 602 and No. 603 RAF squadrons successfully intercepted a formation of Junkers Ju 88 bombers. The Germans were heading the Firth of Forth, planning to attack British cruisers there but were stopped by the RAF Spitfires, losing at least two Ju 88s.

It should be noted that the Spitfires were not deployed to France as a part of the British expeditionary force there. This was a result of decision made by Air Chief Marshal Sir Hugh Dowding, who was determined to keep all the Spitfire squadrons at home bases and use them primarily for defending the British Isles.

Nevertheless, from time to time the UK-based Spitfires were appearing over the continental Europe during the Western Campaign. The first such mission took place on 13th May 1940, when the RAF supported the Dutch Air Force operations. According to official reports, four Junkers Ju 87 dive-bombers were shot down on that day, with a loss of one Spitfire. Until June of 1940, the RAF Spitfires actively supported the Allied operations in Western Europe, covered the Dunkirk evacuation, as well as protected the British homeland. Almost 70 aircraft of that type were lost during that period.

At the turn of 1940 a new idea was born. The British armed forces were in dire need of information about German preparation to invade France and then the Great Britain. Information about particular units, places of their concentration and investments into infrastructure were essential and a reliable photo reconnaissance aircraft was necessary. The Spitfire seemed to be an ideal solution.

Yet in September of 1939 the RAF took over the ´Heston Flight´ – a civilian photo reconnaissance unit, at that time operating Lockheed 12A aircraft. The unit was transferred into No. 2 Camouflage Unit, then, in January of the next year, into the Photographic Development Unit.

The exact date when the first photo reconnaissance (PR) Spitfires entered service, as well as their number, varies depending on the source. It happened somewhere between November of 1939 and February of 1940, when two to four PR Spitfires arrived to the abovementioned unit and then were sent to France.

They were the aircraft released by the Fighter Command and adopted to a new role. All armament  and not necessary equipment was removed. Photo cameras were mounted instead, the airframe was rubbed down to remove any flaws and finally the PR Spitfires were covered with special pale blue and green colour. That allowed the reconnaissance Spitfires to fly faster and higher than most of aircraft of that time.

The idea was to allow the PR Spitfire to fly above the range of anti-aircraft fire and above the ceiling of German fighters. Those reconnaissance Spitfires and their camera equipment were being constantly upgraded and modernized, remaining in the active service during the entire period of the World War II and beyond. Their pilots have done an extremely valuable work, usually flying alone in unarmed aircraft deep into the enemy territory.

On 10th July 1940, the Battle of Britain began. Much could be written about the Spitfire combat record during that period and even more about the following years of the World War II – but for now it is only a handful of interesting facts.

A total of 20,334 Spitfires was manufactured until 1947, when the production was ceased. A majority of them were powered by a famous Rolls-Royce Merlin engine. Although, there were also 2,053 aircraft made, equipped with Rolls-Royce Griffon engine.

There were at least twenty four main variants of the Supermarine Spitfire. And apart from its initial role of a short-range, high-performance fighter, the aeroplane was used as fighter-bomber, night fighter, courier aircraft, photo reconnaissance aeroplane and during search-and-rescue missions. There was also a carrier-borne version, officially named Sea Spitfire but commonly abbreviated to just Seafire. Certainly, there was also a countless number of prototypes and concepts that never entered serial production, including a floatplane.

Apart from the PR aircraft, there was also a high-altitude variant, operated by a Special Service Flight. In 1942, a Spitfire Mk. IX of that unit had intercepted and shot down a Junkers Ju 86R over England, at an altitude of 43,000 feet. This fact is commonly considered the highest air combat of the World War II.

The highest altitude achieved by the Supermarine Spitfire was reported to be 51,550 feet. It occurred in 1952, by the aircraft of No. 81 Sqn while performing a meteo-reconnaissance flight over Hong Kong.

More than thirty air forces all over the world operated the Supermarine Spitfire. This number includes both several foreign squadrons within the RAF structure (Poland, Czechoslovakia, Belgium, the Netherlands and more) and independent forces as the United States, Portugal, Turkey, the Soviet Union or Israel.

The Spitfire remained in operational service several years after the World War II. The Swedish Air Force used the PRU variants until the mid-1950s, Czechoslovak squadrons returned home with their aircraft and Spitfires were operated there until 1951, the Italian Air Force still had some operational Spitfires in 1952, as well as the Rhodesian Air Force.

A successor of the Spitfire was proposed in 1944. It was called Spiteful, was powered by the Griffon engine and featured a new wing design to allow safe operations at high speed. Nevertheless, an introduction of jet-powered aeroplanes caused that design was finally rejected by the British authorities and just a short, pre-production series was made.

On 1st April 1954, the last operational sortie of the RAF Spitfire occurred. The flight was performed by Squadron Leader W.P. Swaby of No. 81 Squadron, who was flying the PR Spitfire Mk. XIX (PS888). He took-off from RAF Seletar air station in Singapore and flown a photo reconnaissance mission within Operation Firedog (a part of the Malayan Emergency). On this occasion, the PS888 aircraft received a simple nose art inscription, ´The Last´. A few months later, all three remaining Spitfires of No. 81 Sqn were sold to the Royal Thai Air Force.

The final flight of the RAF Spitfire is then dated to 1957. On 10th June, the Spitfire Mk. XIX (PM631) of the Temperature and Humidity Monitoring Flight performed the last flight, taking-off from RAF Woodvale.

Nowadays, the PM631 remains airworthy and is a part of the Battle of Britain Memorial Flight (BBMF), being currently painted in a No. 541 Sqn livery. Among the other Spitfires in the BBMF inventory, there is also a PRU Spitfire Mk.XIX (PS915), carrying a livery representing the PS888 at the time of its last flight.

A week ago, the aviation world was disturbed by an incident that occurred in the British Isles. By this, we mean the engine problems suffered by the Catalina flying boat called ‘Miss Pick Up’ while […]

Flying Officer Jaroslav Čermák from No. 313 (Czech) Squadron RAF, crashes with his Spitfire Mk.V (AR512) near Taunton, after colliding with a train. Complicated wartime fortunes of Jaroslav Čermák may work as a perfect example […]