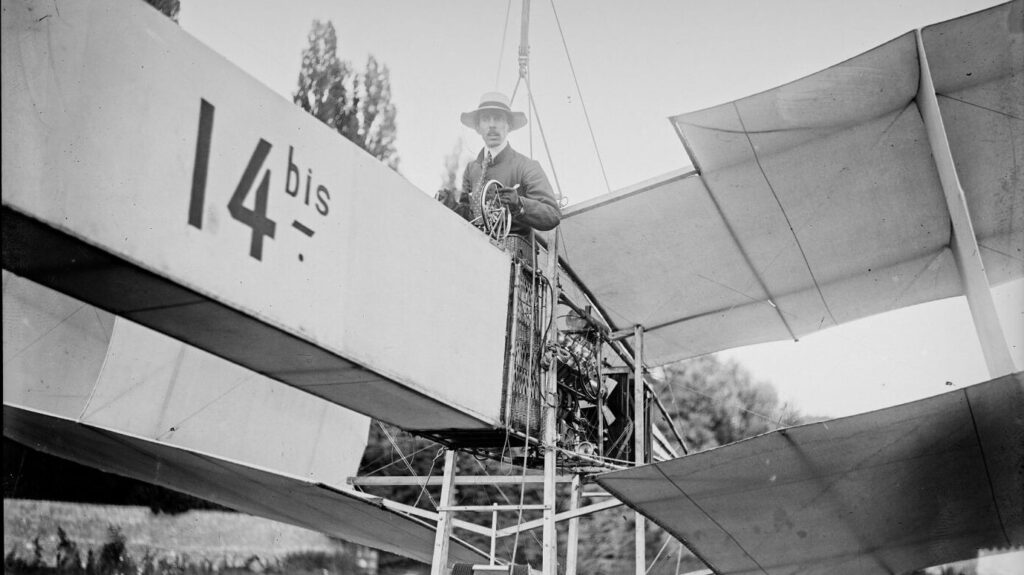 On 12th November 1906, Alberto Santos-Dumont performed a series of public flights, in one of them covering a distance of 200 metres. That was the very first flight officially observed by the FAI and, in addition, the flight that earned the French Aeroclub Award for Santos-Dumont.

Alberto Santos-Dumont was born on 20th July 1873 in Palmira, Brazil, as the sixth child of Henrique Dumont – a Brazilian engineer and coffee farmer, son of French immigrants and a graduate from Central School of Arts and Manufactures in Paris – and Francisca de Paula Santos.

According to his parents, Alberto´s interest in aviation started as early as at the age of one, when he used to puncture every rubber balloon to see what was inside of them. Nevertheless, his first proven interest in aeronautics comes from the year 1891. At the age of 18, Santos-Dumont took a family trip to Europe which resulted, inter alia, in his focus on mechanics and combustion engines.

Being a son of a really wealthy man, sometimes called ´a king of coffee´, Alberto Santos-Dumont did not seem to worry about any official education. He had started several different studies, but never finished them and preferred to spent time in his father´s library and studying on his own, focusing only on subjects he was interested in.

That have not changed after 1892, when Santos-Dumont was emancipated by his father. Young Alberto went to Europe, when he began another study of engineering sciences but two years later he left Europe and travelled across the USA. Then he made another attempt of completing an official education and went to study in Bristol, but as in previous cases, never completed that course.

In 1897 Santos-Dumont moved to France and hired professional balloon pilots and designers to learn about lighter-then-air aircraft. Next year, he made his first ascent in a Lachambre & Machuron balloon, then the first night ascent followed in 1898. In addition, during the breaks between his initial aviation steps, Alberto Santos-Dumont was engaged in car racing, making enough progress on that field to be noticed by French press.

It was also the time when Santos-Dumont started to design his own balloons and dirigibles. The first of them, a balloon inflated with hydrogen and named ´Brazil´, performed its maiden flight on 4th July 1898. It was followed by a second balloon, named ´France´ and a series of dirigibles, named by numbers from N-1 to N-10, then N-13 and N-14.

Nevertheless, balloons and airships were not the only subjects studied and designed by Alberto Santos-Dumont. His official eleventh aircraft was a glider and N-12 was an attempt to build a helicopter. The latter project was, regrettably, abandoned in 1906 due to lack of light but enough powerful engine to make that rotorcraft fly.

In 1906, a hybrid aircraft named N-14bis or Oiseau de Proie (English: bird of prey), designed and built by Santos-Dumont, was introduced to general public. It was a canard-style biplane powered by 50 hp Antoinette V-8 engine, attached to a hydrogen balloon for easier take-off. After a few successful tests of his hybrid, Alberto Santos-Dumont applied for the Aeroclub of France award but was rejected, as his construction was not considered a proper and real aeroplane.

After a few months of further works on the design, Santos-Dumont successfully presented his first aeroplane in October of the same year. Named Oiseau de Proie II, the aircraft performed a series of successful but short flights with the longest one covering a distance of 50 metres at an altitude between 3 and 5 metres. Nevertheless, it earned Santos-Dumont his first aviation prize of 3,000 francs, for a flight exceeding 25 metres.

A slight damage that Oiseau de Proie II suffered after landing, motivated the young aviator to implement more changes into the initial design of his aircraft. The most significant upgrade was use of two octagonal surfaces inserted between the wings, in order to improve steering control of the aeroplane. It was the first time the element, later known as ailerons, was used in an aircraft.

On 12th November 1906, at Bagatelle field near Paris, Alberto Santos-Dumont once again competed for the Aeroclub of France award. Although the first five flights were successful, and Santos-Dumont managed to beat his own record from October by covering a distance of 82.60 metres, it was still not enough to earn the award.

At 16:45 hours, almost by a nightfall, Santos-Dumont decided to make another attempt. He took-off for the last flight of the day and flew 220 metres with an average speed of 37.4 km/h, finally winning the French Aeroclub Award.

The flights Santos-Dumont performed on 12th November at Bagatelle were the first ones observed by general public, the first being recorded by a professional film company (Pathé) and the record flight was the first one being officially recognized by the FAI – Fédération Aéronautique Internationale (International Aviation Federation).

After his winning flight, Alberto Santos-Dumont continued his studies on aviation. He has designed, among others, a Deux Amériques balloon for Gordon Bennett Cup, N-15 and N-17 aeroplanes or N-16 hybrid airship.

In 1907, he made another experimental biplane, designated N-19, that opened a series of Demoiselle (English: damselfly) aeroplanes. The second aircraft from that family, N-20 Demoiselle, is commonly considered as the first practical ultralight aircraft.

Regrettably, at the end of the 1900s, Santos-Dumont began to suffer from multiple sclerosis. His latest flights as a pilot were reported in 1913, the year he was promoted to Commander of the Legion of Honour.

Outbreak of the Great War just made the things worse. Alberto Santos-Dumont was against using aeroplanes in combat and news from the front were a real nightmare for that talented aviator. Shortly after the war, he even started an international campaign against military aviation and involving aircraft in the war effort – but without any success. On 14th May 1922, Santos-Dumont made his last ascent in a balloon.

In the view of worsening health and the fact that aircraft were turned into an effective weapon, Santos Dumont fell into a deep depression. This finally led to a suicide, he committed on 23rd July 1932, at the age of 59.

Nowadays, Alberto Santos-Dumont is still recognized as one of the most talented aviation pioneers. The first airport in Rio de Janeiro and a lunar crater were named after him, and from 1984 Santos-Dumont is an officially recognized as Patron of the Brazilian Aeronautics. In 2015, the Brazilian supercomputer, installed in Petrópolis, Rio de Janeiro and being the largest of its kind in Latin America, was named Santos Dumont in honour of that aviation pioneer.

In 1932, the city of Palmira he was born in, changed its name to Santos-Dumont.