During 17th and 18th May 2019, over 20,000 spectators visited the 18th Helicopter Show – the aviation and rescue event organized annually by DSA Aviation Company at the Hradec Kralove Airport – and used the opportunity to see more than 100 aircraft during the static and dynamic displays.

As always, the first day of the event was addressed to a wide spectrum of specialists from the public safety and health agencies. The problematic of the emergency service duties and procedures was discussed during the professional seminars and conferences, with their programme inspired by the real events – bad weather conditions, night rescue operations and the additional threats caused by the hazardous materials. A few active trainings were performed, this year they included the new chairlift rescue operation scenario, based on the situations that already happened during the last winter season. Especially for the purpose, one sector of the real two-seat chairlift was built in the airport area.

In the afternoon, approximately 1,400 children from the local schools visited the airport to learn how to proceed in the dangerous situations. Additionally, and this was another novelty of this edition, several high schools from the aviation, emergency and rescue sectors were invited to present their educational offer. 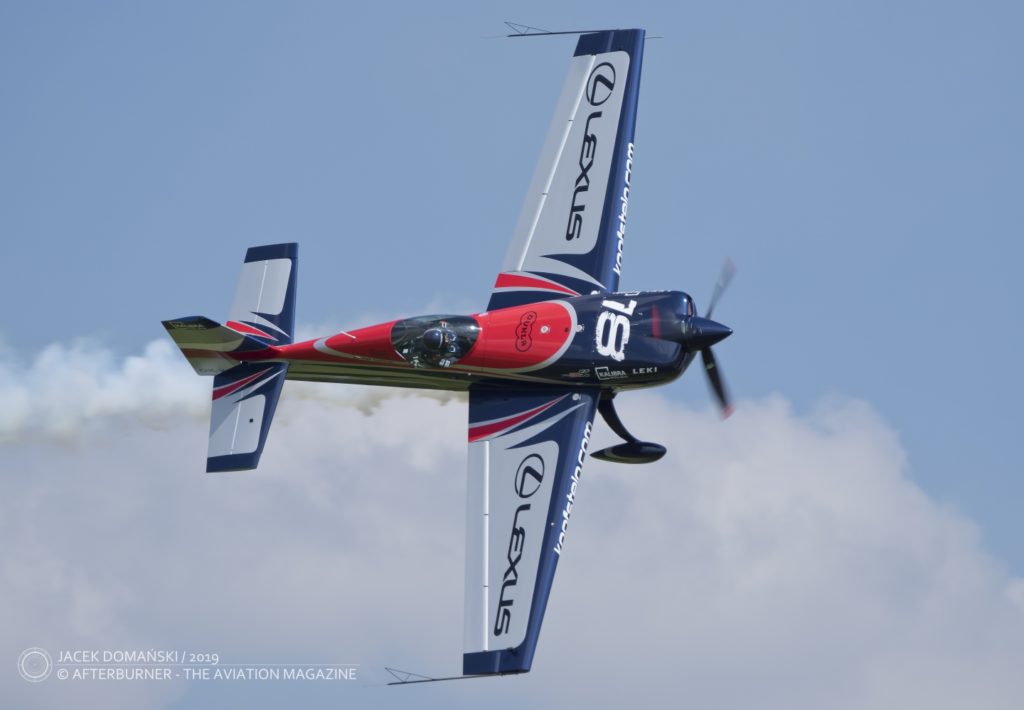 Saturday was, traditionally, an air show day, open to the general public. And, consistently since a few last years, was organized together with the Rally Show – held at the former Czech Ring area, next to the airport. The visitors to both events could walk between the display areas, taking the opportunity to see both motorsport and aviation show. Especially since the main points in the Helicopter Show and Rally Show programme were organized in blocks, not overlapping each other.

The air show programme of the 18th Helicopter Show started at noon, already with some interesting flying displays – first, the recently restored Yak-11/C-11 training aircraft should be mentioned, with, most probably, its first public display this year. This first block of the dynamic displays, being a foretaste of the main show, included also the group of three Cessna Grand Caravan aeroplanes, Piper PA 18 Super Cub and Cessna C525 / CJ 2+.

The initial fly-past of the helicopter formation is already a traditional opening of the air show and this year, as the Helicopter Show was turning the age of 18, it included 18 aircraft – the biggest helicopter formation at this event so far, exceeding the previous record of 13 helicopters in one formation. 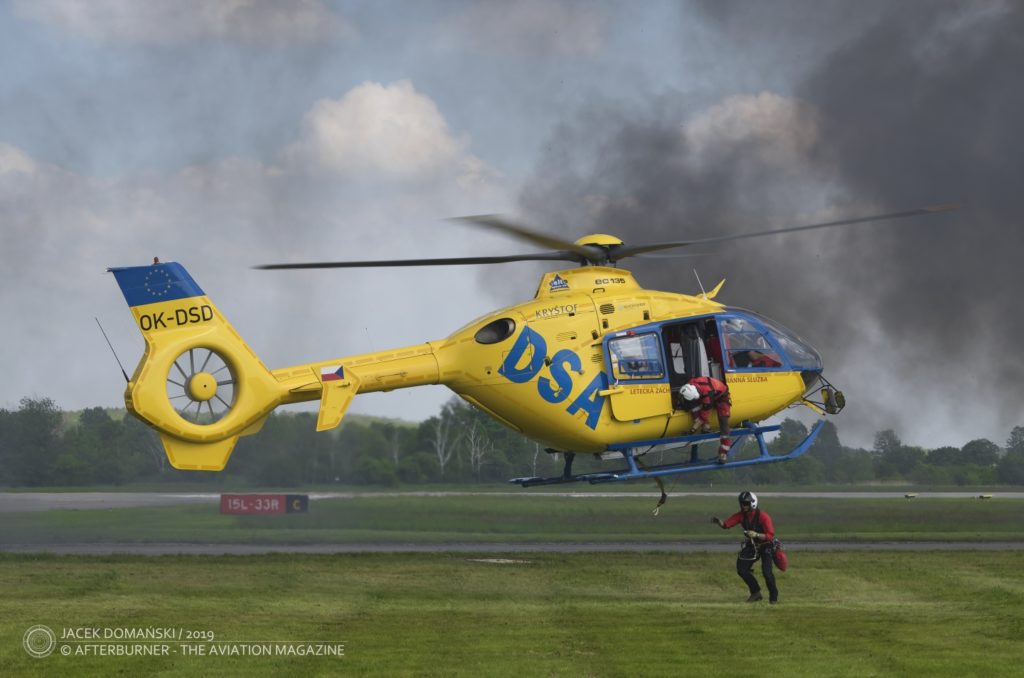 A wide range of individual flying displays was presented, including not only the helicopters, but also the high-level aeroplane aerobatics. Among the highlights of the show were the presentation of Bell 429 from Air Zermatt company and the marvellous aerobatic performance by Martin Šonka and Petr Kopfstein – two Czech pilots participating in Red Bull Air Race series.

Apart from the individual flying displays, three interesting rescue scenarios were shown that weekend. During one of them, the spectators travelled back in time to the Korean War era and were able to see the scenes known from the TV series M*A*S*H, including the Bell 47 helicopter and the re-enactors playing the characters from the TV show (a MASH hospital with the re-enactors was also a part of the static exhibition).

The chairlift rescue scenario, mentioned earlier, was also performed on Saturday and met with the great interest among the air show visitors. And finally, the multiple vehicle collision scenario – with no doubt the most awaited performance at every edition of the Helicopter show – cannot be forgotten. This year it was even more complicated by adding the hazardous materials transported in one of the vehicles, and for this reason the soldiers from the 31st NBC-defence Regiment were also participating in the display. 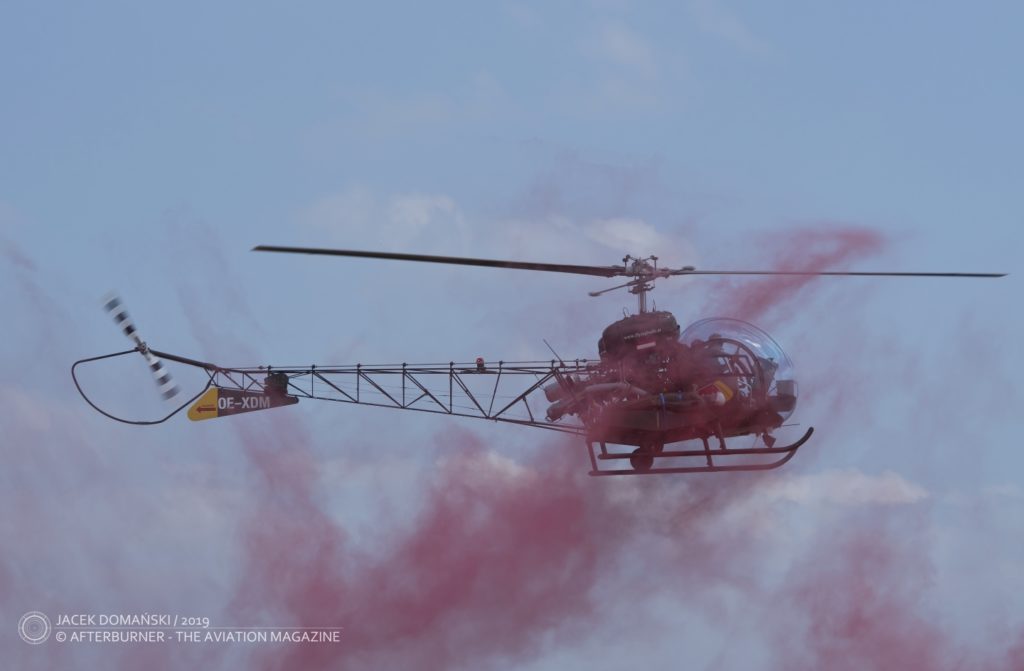 Most of the aircraft performing the flying displays could also be seen at the static exhibition, accompanied by several other aeroplanes and helicopters, supplemented by a few luxury and veteran vehicles.

In addition to those static and dynamic aviation displays, the visitors to the event could also see the presentations of the wide range of public safety and health agencies. Particular interest was given to an autograph session, during which not only Martin Šonka or Petr Kopfstein were available, but also the World War II veteran, Tomáš Löwenstein Lom – waist gunner/radio operator of 311th (Czechoslovak) Squadron RAF.

As already mentioned above, this year more than 20,000 visitors came to enjoy both shows at the Hradec Kralove Airport. Among them there were visitors from Poland, Austria, Hungary, the Netherlands and Slovakia, showing that the Helicopter Show already became a well-recognized event, not only for its aircraft displays addressed to the aviation enthusiasts, but, most of all, because of offering the fun for the whole family.