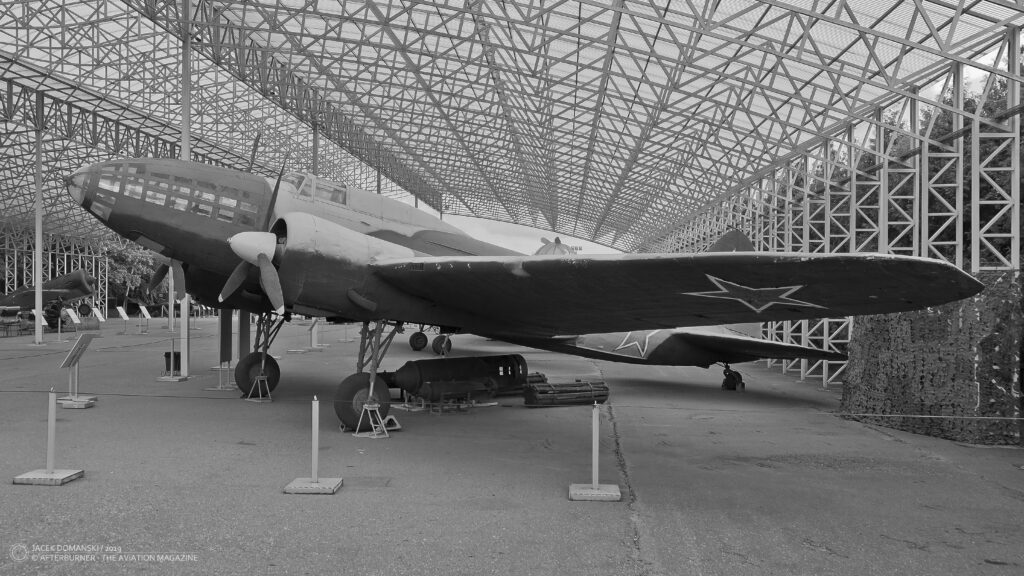 On 29th April 1939, Soviet crew of Kokkinaki Gordienko belly landed at Miscou Island in the Gulf of St. Lawrence, concluding their transatlantic flight from Moscow.

One day earlier, on 28th April at 4:19 in the morning, V.K. Kokkinaki (pilot) and M.Kh. Gordienko (co-pilot) took-off from Moscow and began a non-stop transatlantic flight to New York. Their aircraft was a TsKB-30 ´Moscow´ (ЦКБ-30 «Москва»), a modified prototype of twin-engine long-range bomber, later being known as DB-3 (or Ilyushin Il-4).

There was no surprise that particularly this aircraft was chosen for such record-braking flight. Kokkinaki perfectly knew the TsKB-30 ´Moscow´, as it was the very aircraft he used to set another long-distance record less than a year earlier. On 27th – 28th June 1938, the modified DB-3 flown by the crew Kokkinaki – Bryandinskiy successfully completed a 7,580 kilometre long route from Moscow to Spassk-Dalny (Soviet Far East).

This time, Kokkinaki wanted to overcome his own record and – being inspired by Chkalov´s journey to the USA via the North Pole route – to reach New York in a non-stop flight from Moscow. Shortly after they returned from Spassk-Dalny, Kokkinaki and Bryandinskiy started preparations for their new adventure. Regrettably, in October 1938, Alexandr Bryandinskiy died in an aviation accident and this tragic event delayed the flight. At the beginning of next year a new co-pilot, Mikhail Kharitonovich Gordienko, was designated and the arrangements continued.

On 28th April, the TsKB-30 ´Moscow´ took-off from an airfield that today is a Chkalovsky Air Base and headed north, to New York. This destination was not chosen coincidentally – exactly at that time there was a trade fair organized there, at Flushing Meadows – Corona Park, with a leading slogan ´Dawn of a New Day´.

There were no issues during the most time of the flight and in the morning of 29th April the TsKB-30 ´Moscow´ flew over Cape Farewell (Greenland) and was approaching Canadian coast, when the crew and their aircraft faced severe weather conditions. The entire East Coast of the USA was closed for aviation traffic and there was no possibility to reach New York area.

As a result, after 22 hours and 56 minutes of flight, Kokkinaki belly-landed on a small Miscou Island, in the Gulf of St. Lawrence. There the TsKB-30 ´Moscow´ has ended its almost 8,000 kilometre route from Moscow.

Although it was a belly-landing in the dark and at the unknown land, Kokkinaki managed it perfectly. Only the right engine frame was damaged and pilot suffered a broken rib. Next day, the crew was met by a Soviet commercial agent in the USA, V.P. Butusov, who organized their transfer to New York.

In a biplane owned by a local pilot, Mr. Jones (and being named ´Flying Grave´), Kokkinaki and Butusov flew to Montcon, Canada. Then, in a chartered Super Electra, they arrived to New York on 30th April 1938. The TsKB-30 ´Moscow´ stayed at Miscou for three weeks, then the aircraft was dismantled and returned to the Soviet Union on board of a merchant ship.

Vladimir Konstantinovich Kokkinaki was one of the most-known Soviet test pilots and aviation pioneers. Apart from the mentioned long-distance flights, he set about 20  aviation records and was responsible for evaluation of many Soviet-designed aircraft. In 1961, he became the vice chairman of FAI and then the chairman for 1966 – 1967. V.K. Kokkinaki died on 7th January 1985.

Starting 1965, the northern route Moscow – Helsinki – Iceland – Cape Farewell – Miscou Island – New York he opened by that record flight from 1939 is being used for regular passenger flights. It is commonly considered as the ´shortest flight route between Europe and America´.

On 6th and 7th November 2021, the Davis-Monthan Air Force Base hosted the ´Thunder and Lightning Over Arizona´ air show. It featured a variety of military and civilian air displays, flown by both modern and […]