The new jet fighter entered the operational service in 1985 and one of the primary roles of Su-27 was to protect the coastal border of the Soviet Union, as the part of the long-range air defence, against the USAF bombers (B-1 Lancer and B-52 Stratofortress) and American aircraft carriers. The latter task was to fly as the long-range escort for the USSR strategic bombers – Tu-95 (´Bear´), Tu-22M (´Backfire´) and Tu-160 (´Blackjack´). 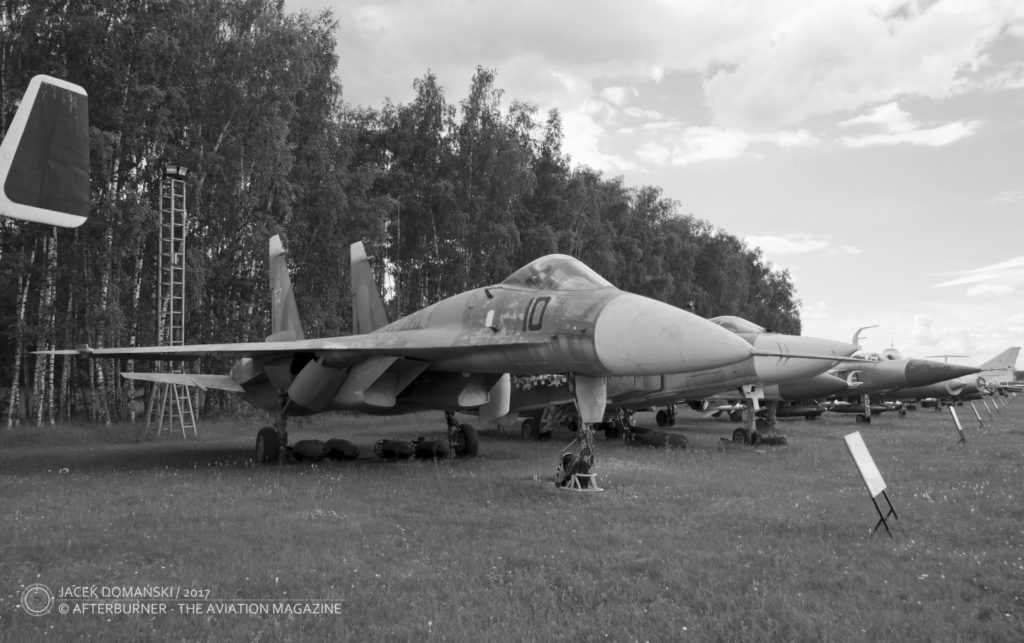 At the Paris Air Show 1989, the new Sukhoi fighter made its debut in the West. Two different variants of the new aircraft were exhibited there – Su-27 (´Flanker-B´) ´Blue 388´ and Su-27UB (´Flanker-C´) ´Blue 389´. In fact, ´388´ aircraft was one of the test aeroplanes, with Sukhoi internal number T10-41, but it was re-painted for the public presentation at the air show. The test pilot of the Sukhoi Design Bureau, Viktor Pugachev (Виктор Георгиевич Пугачёв), was assigned to present the new aircraft in the air, during the flying display.

Su-27 is called a high-manoeuvrability jet, and during the flying demonstration Pugachev performed the series of manoeuvres showing the abilities of the Sukhoi fighter. At some point he slowed down to a proper speed and played his wild card by switching off the limiter of the angle of attack installed in the aircraft. Then Pugachev pulled the control stick on him, rapidly rising the nose of the ´Flanker´ and extremely increasing the angle of attack, while at the same time extremely reducing the speed of the jet. In the next step, he pushed the stick away, to straighten the aeroplane up and increased the power of Su-27 engines to gain the speed again. Such a manoeuvre was never been seen before! And it was possible to perform mainly because of the thrust vectoring technology used in ´Flanker´. 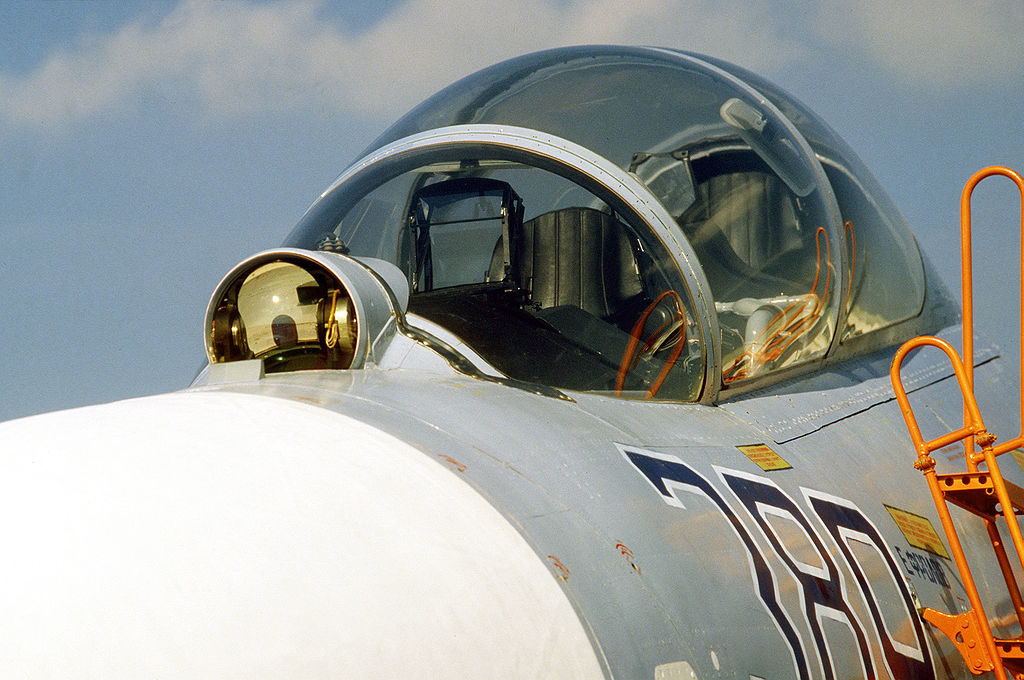 This manoeuvre received a lot of attention in the aviation world – not only it was commented widely, but also made Viktor Pugachev famous. Since then, the name ´Pugachev´s Cobra´ was worldwide adopted for the manoeuvre.

It has been – and still is – widely discussed if the ´cobra manoeuvre´ could be any useful during the real aerial combat. As far as being close to the ´classic´ dog-fight, Su-27 and other similar aircraft able to perform this manoeuvre, may perform the ´Pugachev´s Cobra´ while being pursued closely by an enemy, slowing to the point the pursuer may overshoot them. Then the manoeuvre may give the now-pursuing ´Flanker´ aircraft the perfect opportunity to fire its weapons. On the other hand, playing this trick in the real combat has also some disadvantages – during the manoeuvre the aeroplane moves at the low speed for a certain moment, leaving it vulnerable to attack from another enemy aircraft.

Another much-mentioned potential advantage of ´Pugachev´s Cobra´ is the possibility to be used as a defence against being tracked by the enemy radar, even if already locked. The sudden change of speed by the aircraft performing the ´cobra´ can, with high probability, cause that Doppler radars lose their lock on target. This occurs because the Doppler radars usually ignore the objects with near-zero velocity, to reduce the ground clutter. Due the immediate reduce of the aircraft speed, to the near-zero point, the target already locked on is automatically filtered off, as the ground clutter.

Although the Pugachev´s famous display during the Le Bourget 1989 is widely considered the first public presentation of the ´cobra manoeuvre´, this is just partly true. The first official, however just for the tight-knight community of Soviet officials, Pugachev´s demonstration of the ´cobra´ stunt, took place on 28th April, at Zhukovsky airfield. 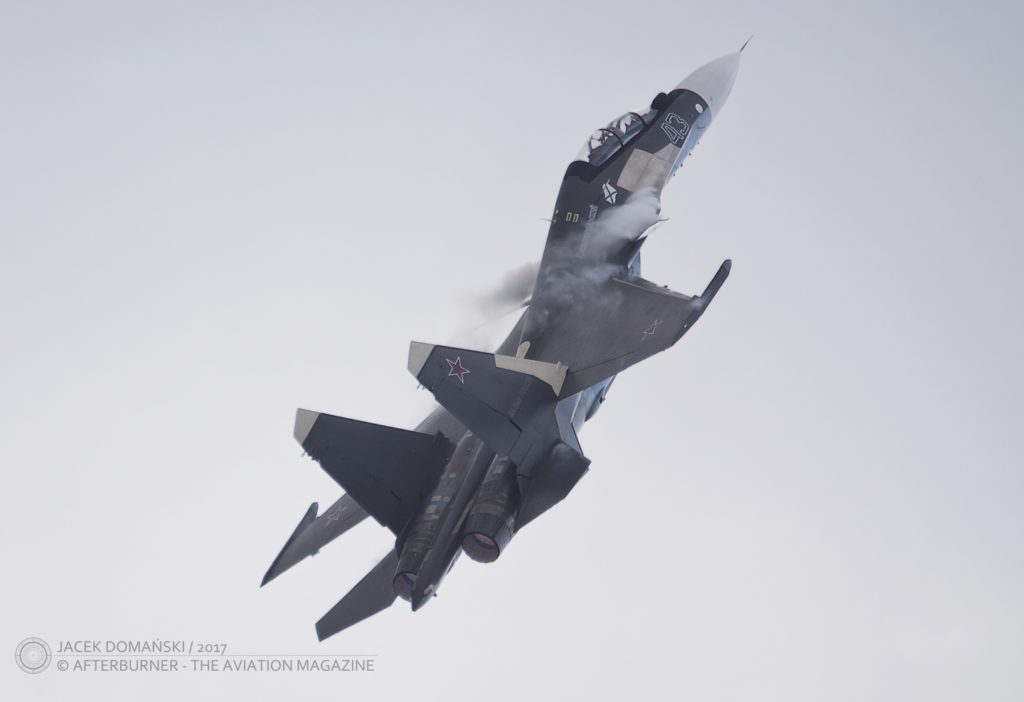 However the manoeuvre is widely acknowledged as ´Pugachev´s cobra´ and it made Victor Pugachev a well-known person, there is another test-pilot responsible for this stunt, who usually is staying in the shadows and known only to some aviation enthusiasts – Igor Volk (Игорь Петрович Волк), pilot and cosmonaut, considered one of the most experienced and talented test-pilots in Russia, nicknamed ´the king of the dead-stick landing´. And, as often happens, the cobra was discovered by an accident.

Testing the stall and spin loss of control is a usual part of the live-fly test of the new aeroplane. Su-27 was no exception, with Igor Volk behind the controls. During one of the test flights, the aeroplane went into the tail spin at an altitude of 11,000 meters and despite any attempts it seemed there was no possibility to pull it out – in such situation, the procedure is to eject at the altitude of 4,000 meters, but Volk had his personal method of calculating the ejecting moment and based on this, he was still trying to save the aircraft. As he said in several interviews, he accidentally turned-off the stability improvement system, although this was strictly forbidden to touch this switch during the flight. Switching the system off, however, allowed Volk to pull the ´Flanker´ out of spin. 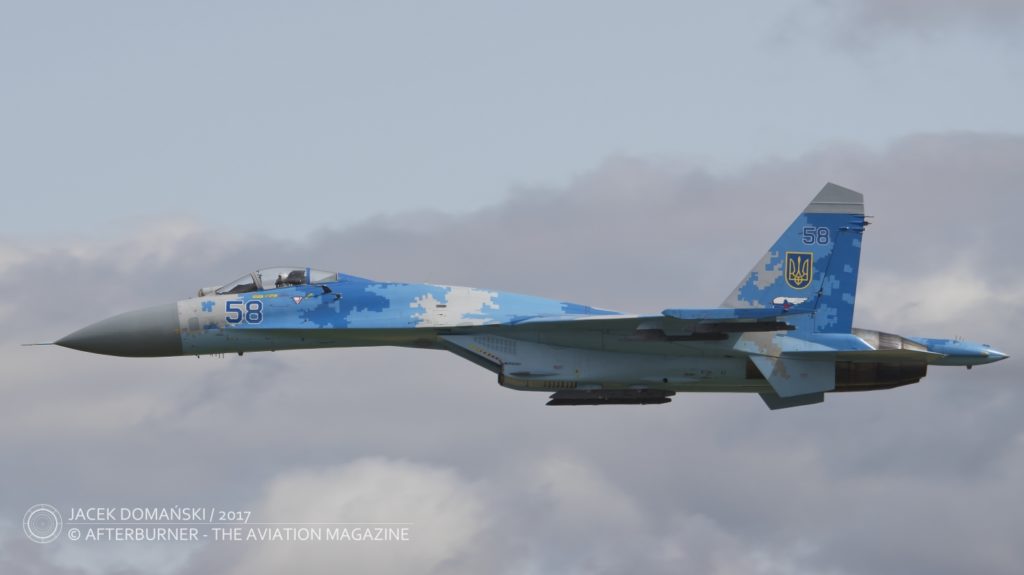 One of the initial Su-27 variants – Su-27P, the air-defence fighter (this one operated by Ukrainian Air Force)

And, without the accidental turning-off of the stability control during that test flight, the ´cobra´ would never be discovered. Su-27, similar as many other modern jet fighters, was made as the inherently unstable aircraft which is more than hard to control without the stability improvement system (for this reason it was forbidden to switch it off during the flight). It must be added, that Volk was always sceptic when asked about the possibility of using the ´cobra´ in the real combat – for him it always was just a stunt. Admittedly extraordinary, but only a trick of the skilled pilot. 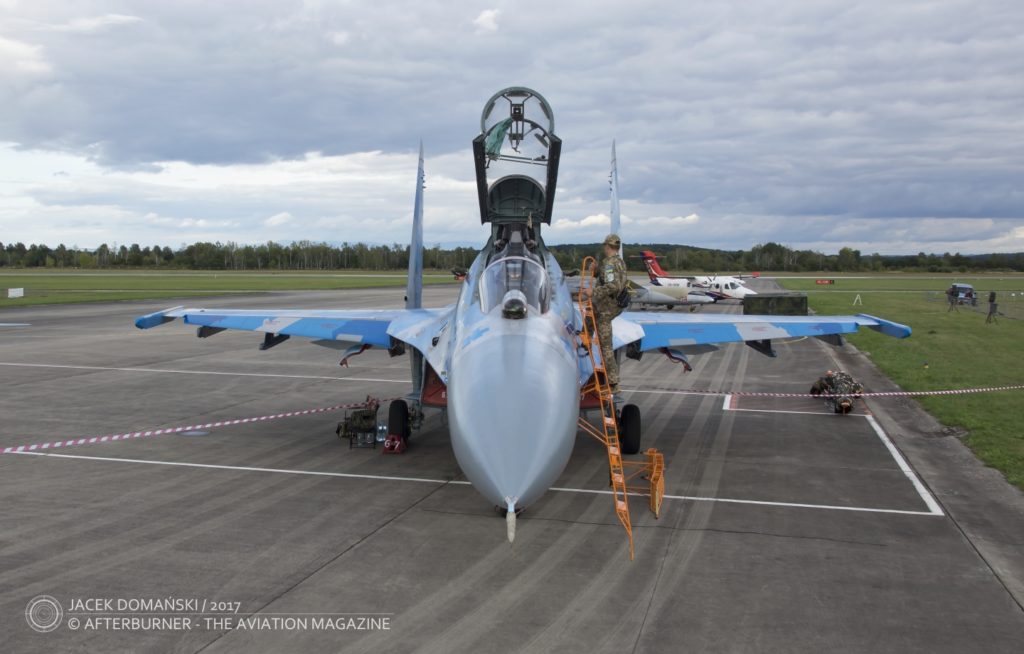 Certainly, Volk was asked several times if he was not jealous, that the manoeuvre he discovered was not named after him – usually he answered that this was not planned, done by accident, and that he shared his experiences with other test-pilots. Including Pugachev, who was the first pilot to show this stunt in public, so it was no surprise that journalists named the manoeuvre after him. And that ´Wolf´s cobra´ would sound stupid (´Волк´ means ´wolf´ in Russian).

Today, Pilot Colonel Viktor Pugachev is one of the best and most famous Russian test-pilots. He lives in Zhukovsky and works as the Chief Pilot Designer at Sukhoi Design Bureau. In his career as the test pilots he broke 13 world records flying the Sukhoi P-42 (one of the Su-27 prototypes), 9 of them still being active. He also received several honours and awards, including the Hero of the Soviet Union, the highest distinction in the USSR. Pugachev, in addition to his professional experiences, is also an active member of the Zhukovsky community – he is a municipal deputy, member of the cultural and sport commissions.

Pilot Colonel Igor Volk died in 2017, at the age of 79. During his career as the test pilot he clocked up 7,000 flying hours (3,500 of them during the live-fly tests) on more than 80 aircraft. He was known of his exceptional skills of flying at the critical angles of attack and testing the aircraft behaviour in spin and stall. Volk was also a cosmonaut – a crew member of Soyuz T-12 mission and planned to crew the Buran space-shuttle missions. He was also active in aviation sport, ecology and aviation journalism. He was awarded the Hero of the Soviet Union and Order of Lenin for his participation in the space programme. 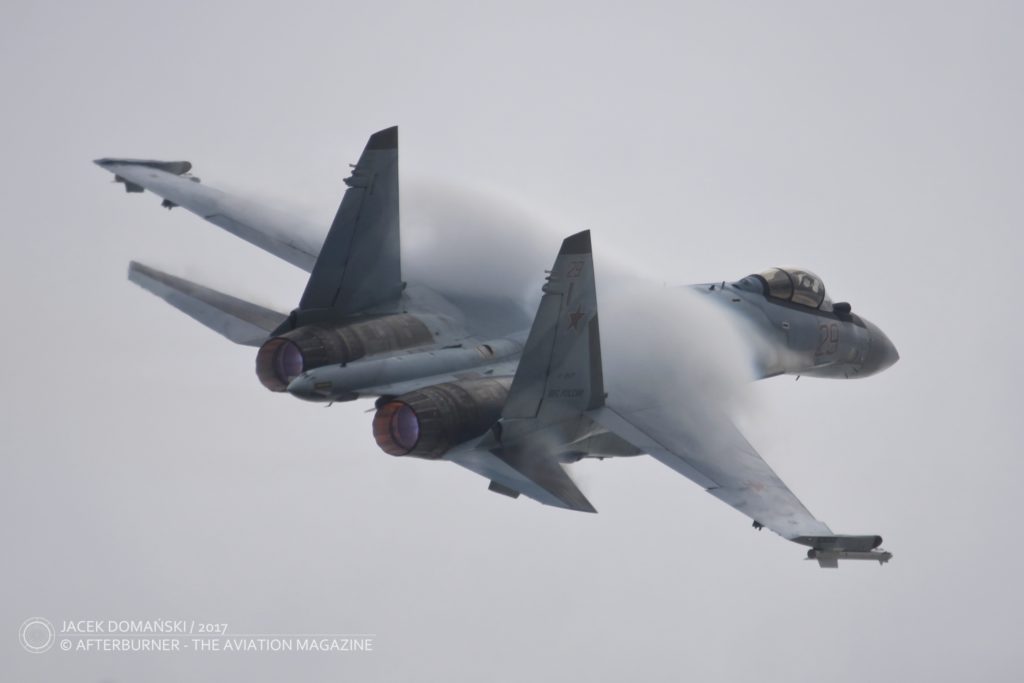 The ´Pugachev cobra´ is among the most-desirable manoeuvres, the spectators would like to see during the air shows. The stunt is now usually performed by the Russian pilots, both solo and team displays flown on the aircraft from the ´Flanker´ family, and sometimes by the Ukrainian Su-27 flying the display at the European air shows.

This famous and breath-taking stunt might be performed by several aircraft, including the Su-27 and its derivatives, recent versions of MiG-29 and the lately developed fighter jets as MiG-35, Su-57 or F-22 ´Raptor´. However, the best performance was achieved by Su-37 (´Flanker-F´) test aircraft, being able to fly the ´cobra´ at 150-180⁰ angle of attack.

Aviation adventure in the heart of Harz – Luftfahrtmuseum Wernigerode.