According to the Boeing company information released at the beginning of October, the existing fleet of Bell Boeing V-22 Osprey tiltrotor aircraft reached the 500,000 flight hours milestone.

The aircraft have been developed since 1981, through the Joint-service Vertical take-off/landing Experimental (JVX) programme, initially led by the US Department of Defence and the US Army. In 1983 the US Navy and Marine Corps joined this initiative and eventually the JVX combined the requirements of the Air Force, Army, Navy and Marines. 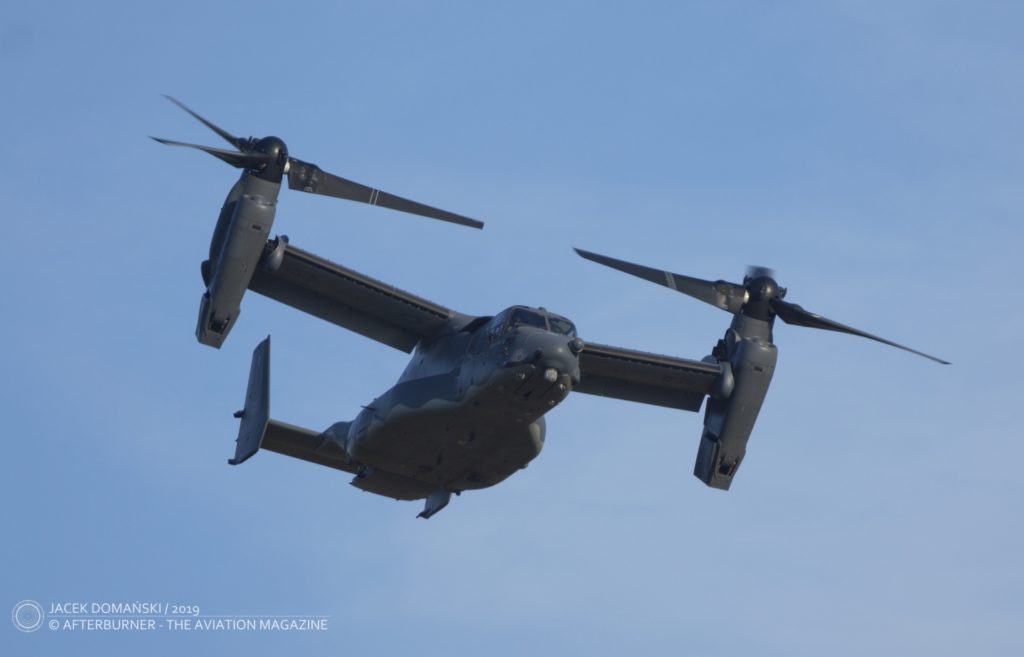 At the beginning of the JVX programme, there were six companies interested in development of such unique aircraft (Aérospatiale, Bell Helicopter, Boeing Vertol, Grumman, Lockheed and Westland), however only one offer was finally received – the project created jointly by Bell and Boeing. The new aircraft was designated V-22 Osprey in 1985 and performed its maiden flight on 19th March 1999.

The path to the fully operational tiltrotor aircraft wasn´t easy and the first V-22 became operational only in 2006, 25 years from the launch of JVX programme. JVX turned out to be a very controversial project, a few times increasing the initial budget of 2,5 billion USD, as planned in 1986. Finally, the development of this unique tiltrotor is estimated to cost over 50 billion USD (27 billion USD for the development works and over 25 billion of production costs). During those development years, the JVX programme suffered several ups and downs, including some Osprey-related scandals.

Nevertheless, the long and expensive programme created a unique aircraft, the first tiltrotor aircraft in the world in serial production and operationally used by the armed forces. The V-22 Osprey is powered by two turboprop Rolls-Royce Allison T406/AE 1107C-Liberty engines, mounted at the wingtips, each with a three-bladed proprotor. For take-off and landing, the ´helicopter-configuration´ is mostly used, but also the STOL configuration with the nacelles tilted forward up to 45° is possible. 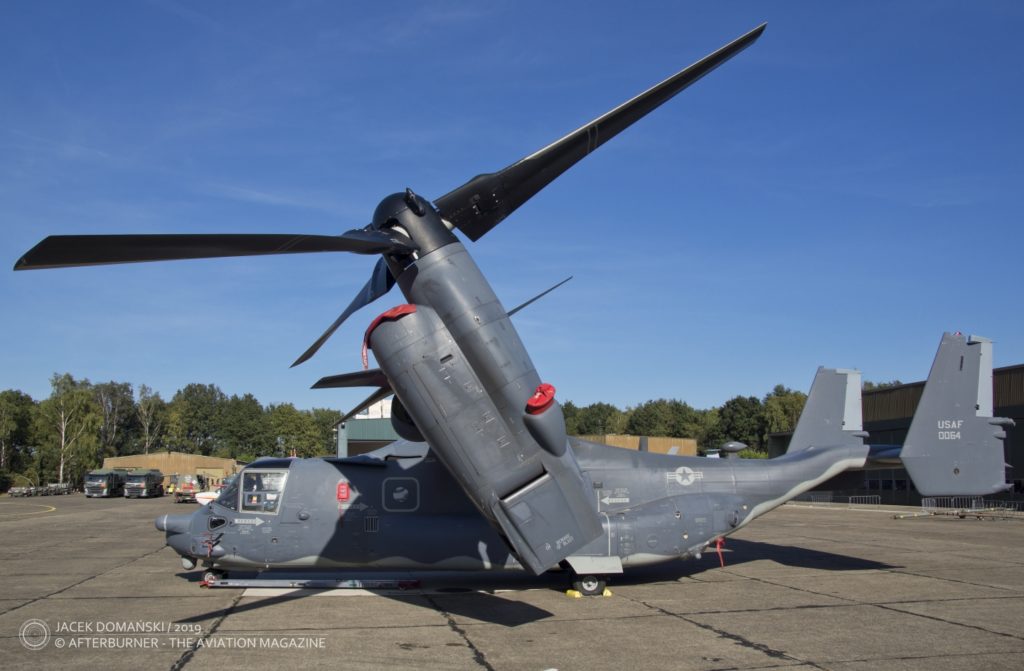 Currently, 375 Ospreys are operated by the USAF, US Marine Corps and US Navy, mostly as the aircraft designated for special operation purposes. The Japan Self-Defence Forces are the only outside-US operator of V-22, with five Ospreys ordered in 2015. However, the operational deployment of Japanese V-22, initially planned for 2018, was postponed for an indefinite time.

Due to the fact, that V-22 Osprey is primarily used by the special operation units, it already has a quite impressive operational history. The Ospreys were used in Iraq, Afghanistan, Haiti, Africa, Philippines, Yemen – not only in combat operations, but also in humanitarian missions. The Ospreys belonging to the Special Purpose Marine Air-Ground Task Force – Crisis Response – Africa (SPMAGTF-CR-AF) helped to fight with Ebola virus in Africa; V-22s were also used in relief operations after the Typhoon Haiyan / Super Typhoon Yolanda. 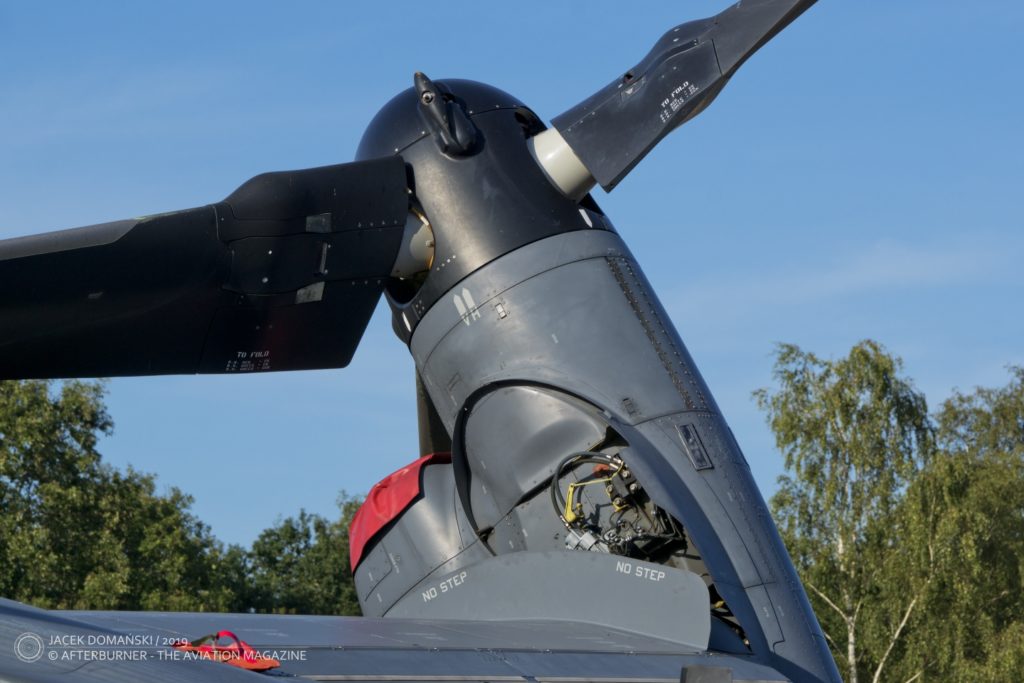 V-22 Osprey was also the aircraft used during the Operation Neptune Spear, as the hunt for Osama bin Laden was codenamed. It was one of the Ospreys that carried the Osama bin Laden body from Bagram airbase to USS Carl Vinson aircraft carrier.

The Ospreys are also occasionally supporting the Marine One presidential squadron. In 2013, V-22s for the first time carried the White House staff and in 2018 Melania Trump became the first First Lady of the United Stated to fly in V-22 Osprey.

Unfortunately, since becoming operational, seven Ospreys crashed, including two occurred in combat zone. Together with some other incidents, it resulted in a total of 12 fatalities. 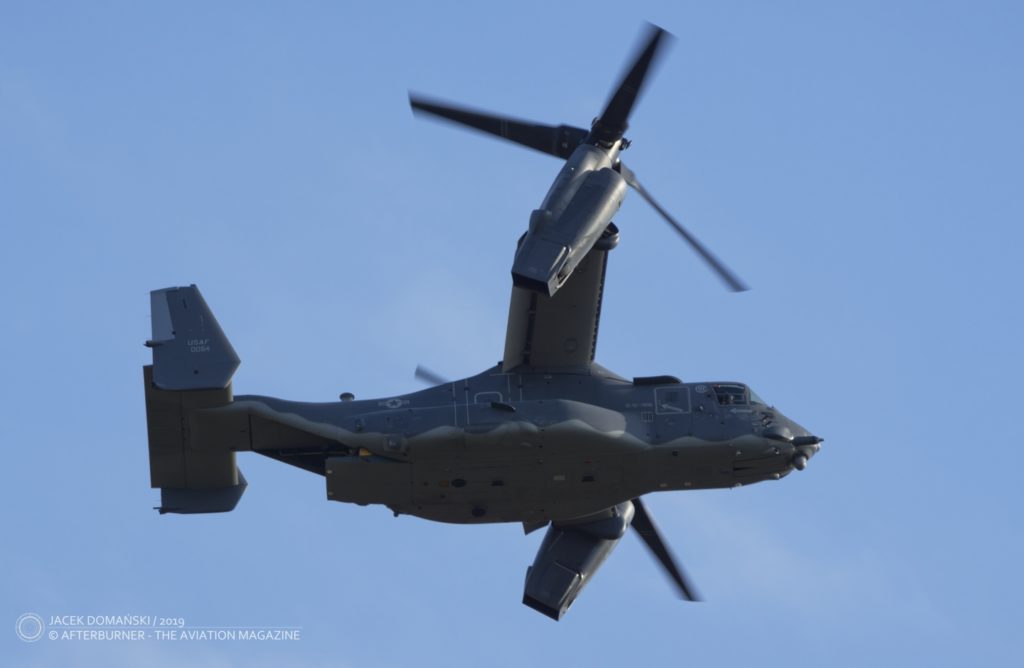