In September 2019, Sanicole Sunset Airshow and Sanicole International Airshow returned after the one-year gap, caused by the Belgian Air Force Days – the biennial event rotating among the Belgian air force bases and in September 2018 held in the nearby Kleine-Brogel AFB.

Although there was no show in 2018, Sanicole Airshow team was working all that time, using this gap year as an opportunity to discuss the future shape of the event with air show visitors. As a result, not only the list of air show participants was arranged in response to the survey made among the regular visitors, but there were some organizational changes, mostly related to food and parking. 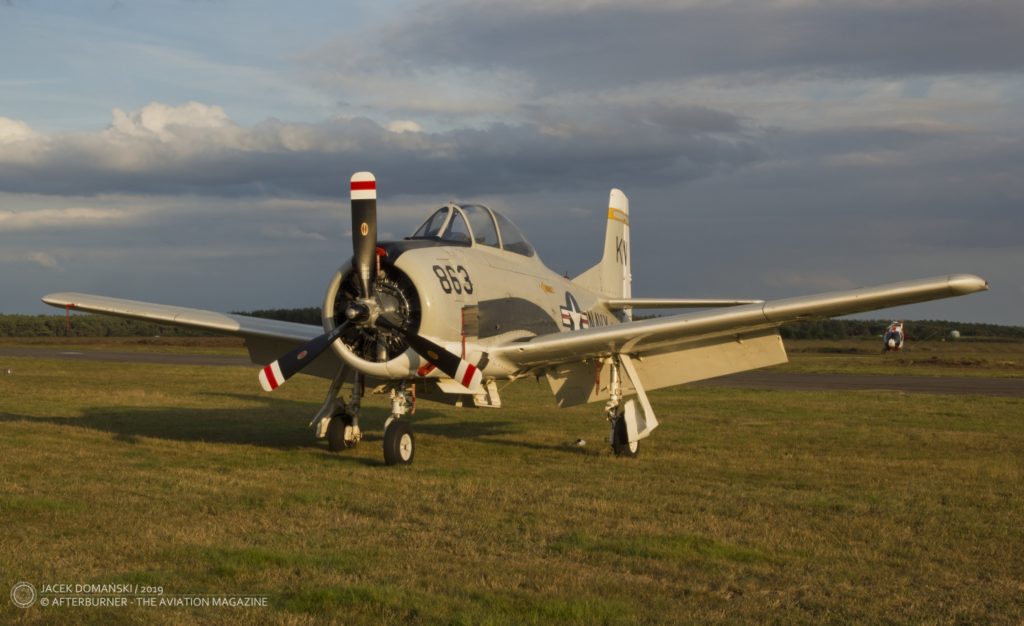 Sanicole Weekend 2019 was traditionally opened by the 8th Sanicole Sunset Airshow, a spectacular late evening show organized on Friday, 13th September. Fortunately, and in contrast to now-famous 2017 edition, the weather of the first day of the air show was almost like in July – warm and sunny, with just a few clouds at the beginning, and slowly increasing cloudiness in the evening.

Leopoldsburg/Beverlo Airfield, where the show is organized, is a small, former military airfield, now operated by Sanicole aeroclub. As its area is very limited by the surrounding military facilities and training grounds, there are no static exposition there, as we know it from other events. Usually, just a few aircraft are available in the area and in 2019 the static exhibition included an already retired Belgian F-16 Fighting Falcon, mock-up of Lockheed Martin F-35 Lightning II (both aeroplanes exhibited with the possibility to take a seat in the cockpit), Agusta A109, NH90 TTH of Bundeswehr (Heer) and a group of aeroplanes parked between the visitors´ area and the airstrip – T-28 Trojan, Lockheed 12A Junior Electra, Pilatus PC-12 and PC-7.

During the air show, aircraft operations at Leopoldsburg airfield were usually limited to helicopters, aerobatic specials and ultra-light aeroplanes. Most of the participants are based at Kleine-Brogel AFB, from where they fly to Sanicole and perform their air displays. This year, due to extension of the visitors´ area by moving the fence toward the airstrip, no local landing/take-off operations were  allowed during the opening hours – an insignificant inconvenience in exchange for more comfortable conditions to enjoy the show. 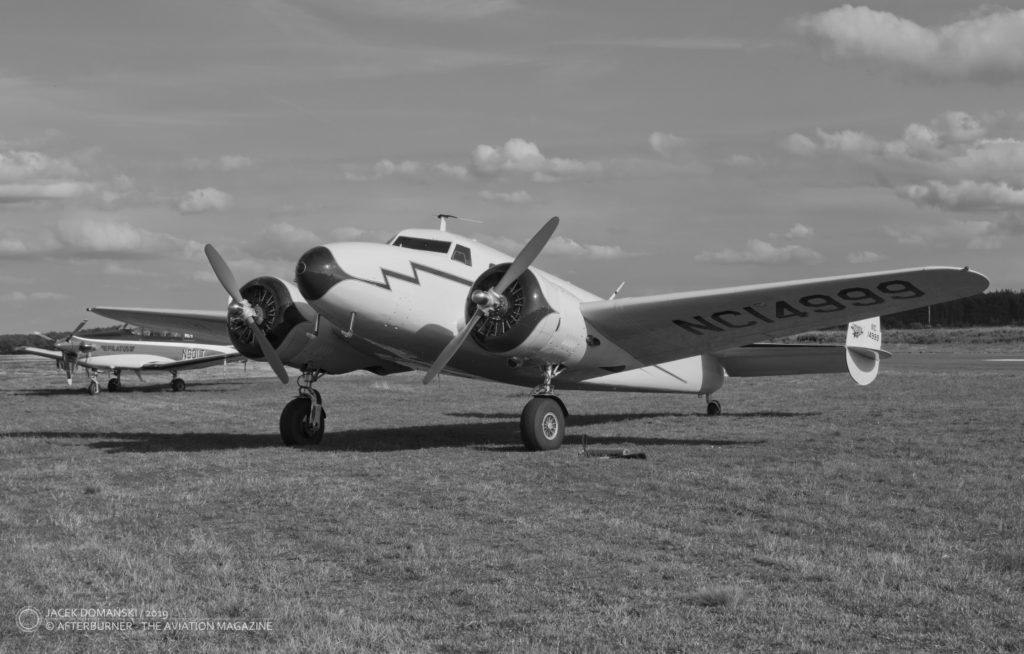 Shortly before 1800 hours, the audience gathered at Leopoldsburg airfield was greeted by two traditional Sanicole Airshow commentators – Ric Peterson and Chris Christiaens. Then, as usual, the 8th Sanicole Sunset was opened by Jean-Marc D´Hulst, flying the Stolp Starduster Too – a home-built biplane in a colours of Trescal company. Jean-Marc is one of Sanicole regular participants, usually opening the Friday show with his biplane aerobatic show.

As soon as the tiny Starduster finished its display, a ‘Big Ugly Fat Fellow’ approached the Sanicole airstrip. The Boeing B-52H Stratofortress of the United States Air Force came from RAF Fairford air base in the United Kingdom and was already circling above Limburg province for some time, waiting for its slot in the air show programme. The Stratofortress made one pass over the airfield – regrettably just the only one – flying away in the direction of the setting sun.

Quite unexpectedly, as not included in the air show programme distributed via e-mail approximately one hour before the start, another participant from the United States followed – CV-22B Osprey from 7th Special Operations Squadron USAF, based at RAF Mildenhall. The American tiltrotor aircraft attracted the attention by showing both helicopter and aeroplane flying modes, during a few passes over the Sanicole airfield. It should be also noted that this was the first ever tiltrotor flying display in Belgium. 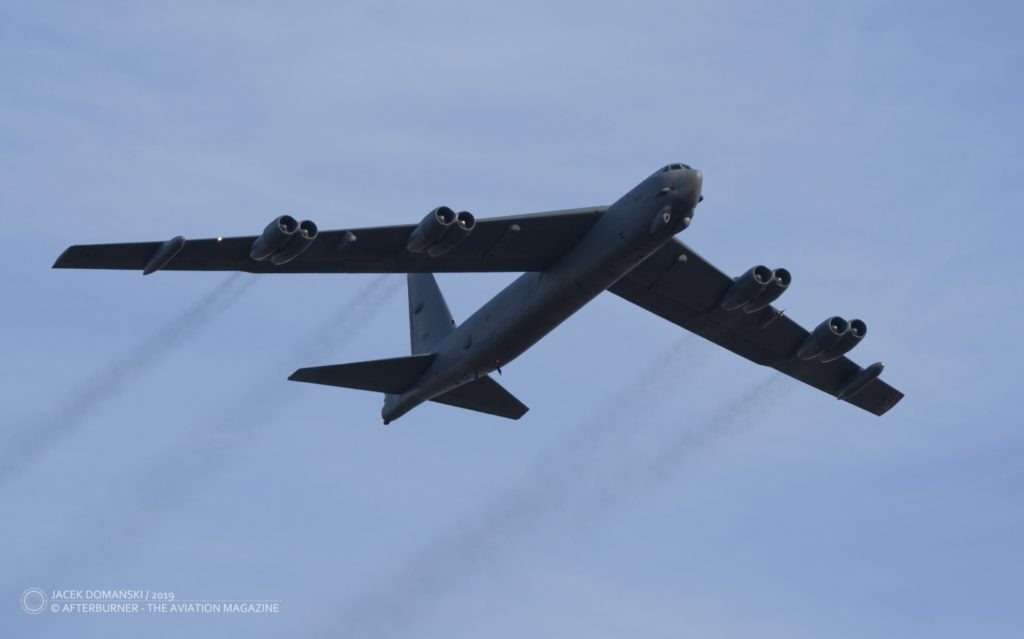 Another participant of Sanicole Sunset arrived from Geilenkirchen in Germany – Boeing E-3A Sentry, the aeroplane being a regular visitor at main European military aviation events. However, a flying display by an AWACS aircraft is extremely rare, much less the unique experience of an evening performance.

The smoke trails from AWACS engines yet did not disappear from the sky when another aircraft made by Boeing company began its display. Similarly to E-3A Sentry it was a four-engine aeroplane but manufactured in 1945 – Boeing B-17G Super Fortress ´Sally B´, the sole airworthy B-17 in Europe. Currently based in Duxford (UK), ´Sally B´ is now a rare view at the air shows across the Channel,  however the celebration of the 75th anniversary of Belgian liberation was one of those occasions. The spectators enjoyed this mighty four-engine bomber for almost ten minutes, as ´Sally B´ was performing several passes over Sanicole, amazingly illuminated by the warm light of the evening sun. A memorable view, that stayed with the spectators for a long time.

The Super Fortress was followed by another, though much younger, historical aircraft. SAAB SK 37E Viggen, the Swedish jet fighter from the 1970s, appeared over the Sanicole airfield and performed a stunning solo display. This aircraft is still owned by the SAAB company, but operated by the Swedish Air Force Historic Flight. SK 37E was the final variant of Viggen, converted between 1998/2000 from the classic two-seat trainer for electronic warfare aircraft and trainer, and retired from the Swedish Air Force in 2007. 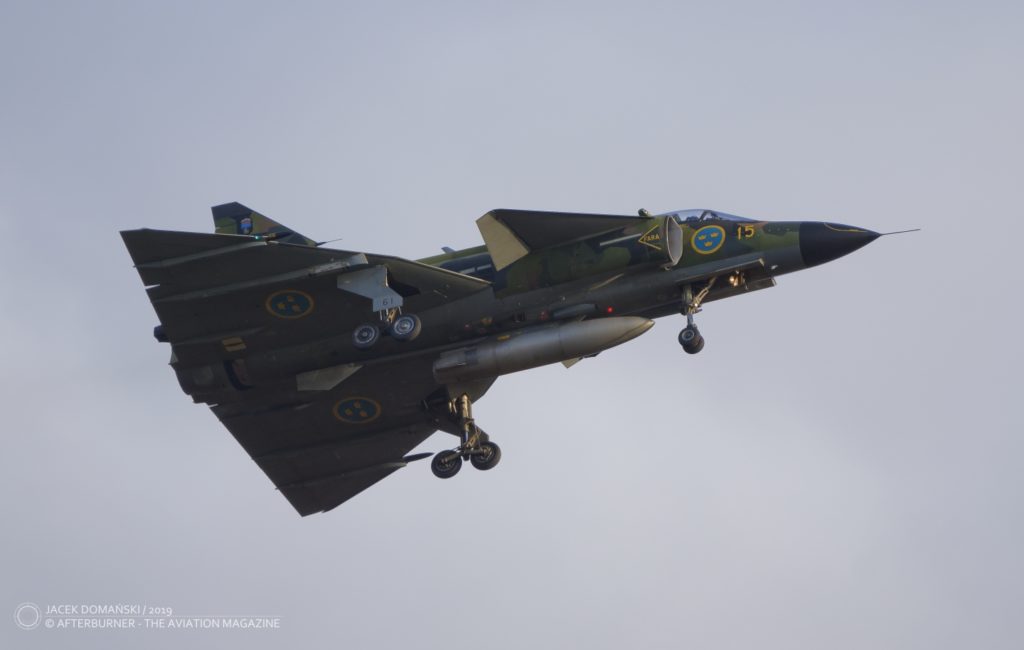 Shortly after the last flypast of Viggen, a pair of most-famous World War II fighter aircrafts arrived – North American TF-51D Mustang ´Scat VII´ and Supermarine Spitfire Mk. XVI. And while ´Scat VII´ already became a regular Sanicole participant, the Spitfire in the livery of 349th (Belgian) Squadron of the RAF made its debut at the show. This aeroplane – Spitfire SL721 – arrived Belgium quite recently, in March 2018. Bought by a private owner, SL721 became the first Spitfire in the country.

The roar of jet engines announced the next participant, Patrouille Suisse aerobatic team in a formation of six Northrop F-5E Tiger II fighters. The Swiss national display team performed a marvellous show in the last touch of a summer sunset, enhanced with the several flare releases – including the spectacular curtain of flares in the display finale.

When light was slowly fading away, Belgian Air Component took over the sky over Sanicole. At first, the A109 Display Team presented a wonderful and breath-taking helicopter display, flying an Agusta A109BA rotorcraft. Although this advanced helicopter aerobatics, together with many spectacular flare releases, amazed the crowd, it was just a foretaste of the Sanicole Sunset highlight – the Belgian Air Force F-16 Solo Display.

´Dark Falcon´ flown by Sr. Capt. Stefan ´Vador´ Darte appeared around nightfall and made a ten-minute display. It was an astonishing conclusion of displays performed by the military aircraft, which were the backbone of Sanicole Sunset 2019. Flying most of his display with the afterburner on, ´Vador´ was cheerfully greeted by the audience while releasing flares and showing some fantastic aerobatic manoeuvres. 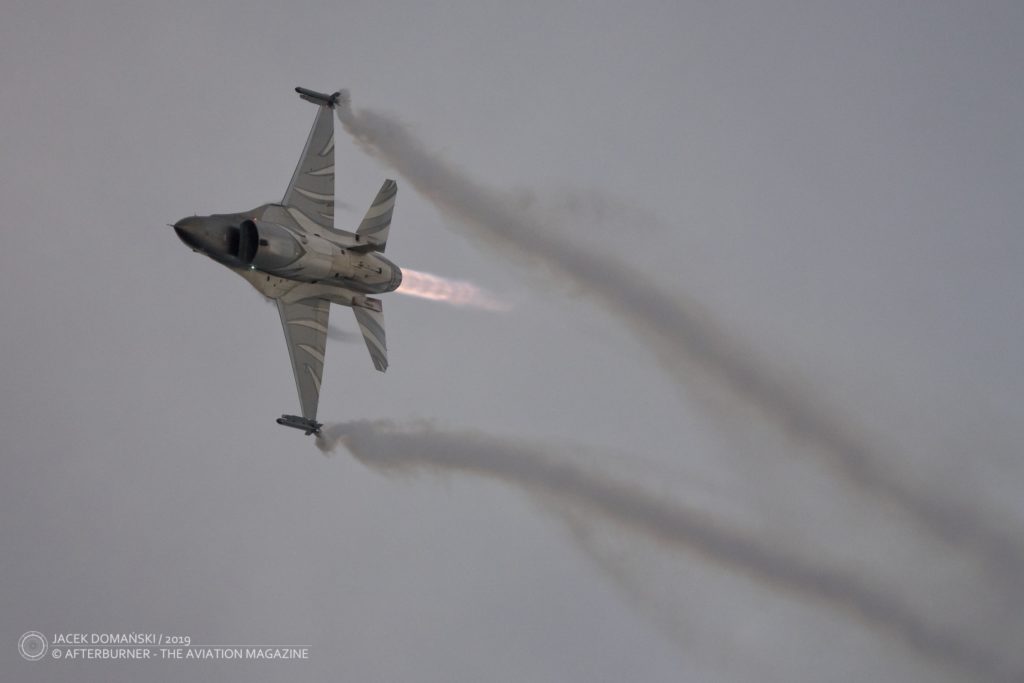 And while the thunder of ´Dark Falcon´ was still echoing around the airfield, two small Van’s Aircraft RV-4 began their relaxing display in the night sky. FireFlies Aerobatic Team was another participant that came from the UK, being also another Sanicole Sunset premiere. The team´s smooth and calming display was in great contrast to such a dynamic display of F-16, that concluded just a moment ago.

Brendan O´Brien and his Flying Circus are already well known among the Sanicole Airshow spectators. During the previous edition of Sunset Airshow in 2017, the rainy weather regrettably did not allow the Flying Circus to perform their eagerly awaited eye-catching pyrotechnic show. Two years later, O´Brien´s circus returned to Belgium with ´OTTO – the helicopter´, showing just incredible, amazing flying display of Schweizer 300C – full of spectacular fireworks and other pyrotechnical effects.

As already mentioned above, Belgium celebrated its 75th anniversary of liberation in September 2019, and Sanicole Airshow was also one of many commemorating events across the country. The flying displays of B-17G Super Fortress, TF-51D Mustang and Supermarine Spitfire, were dedicated to this anniversary, together with the presentation of modern military aircraft. However, the final point of the programme was even more special and remained in the spectators´ hearts for a long time after the show. 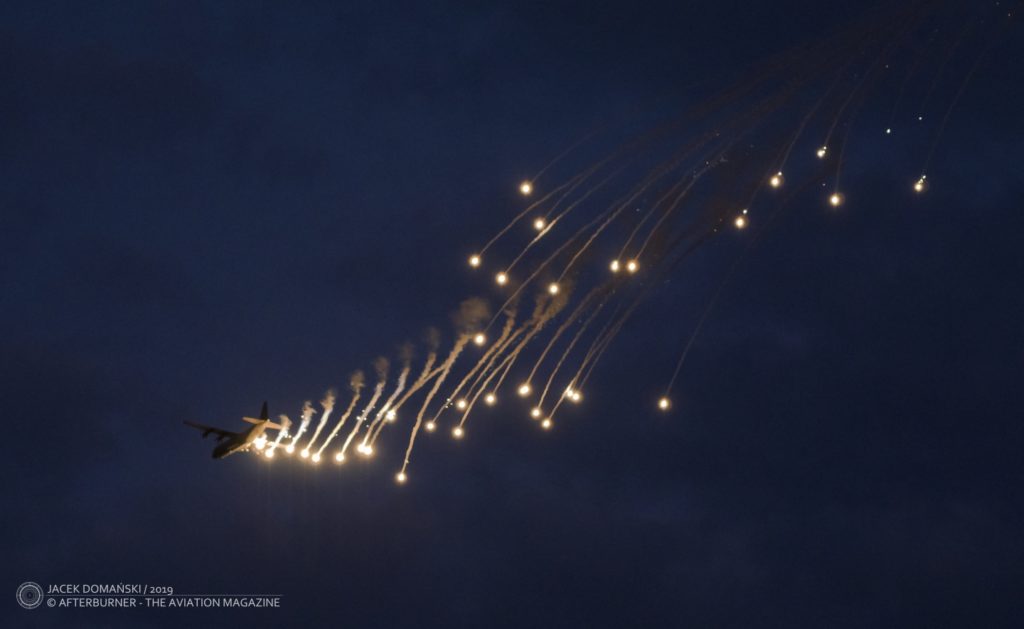 A lone trumpeter stood on the airstrip and played ´Amazing Grace´, while the commentators followed with the tribute to whom we owe the liberation, those who fought and gave their lives during the war. With the last sounds of the trumpet, the C-130J Hercules from the Royal Danish Air Force appeared in the dark, releasing a curtain of flares along the runway. A tender moment, reminding us the dark and hard time of the World War II.

Sanicole Sunset Airshow was initially launched as an additional event, opening the aviation weekend in Limburg and being a foretaste of the main International Airshow on Sunday. The 8th edition of the evening show once again proved that it already became another full-scale performance, well-known in Europe for its spectacular twilight displays and being the event that can be safely recommended to every aviation enthusiast.