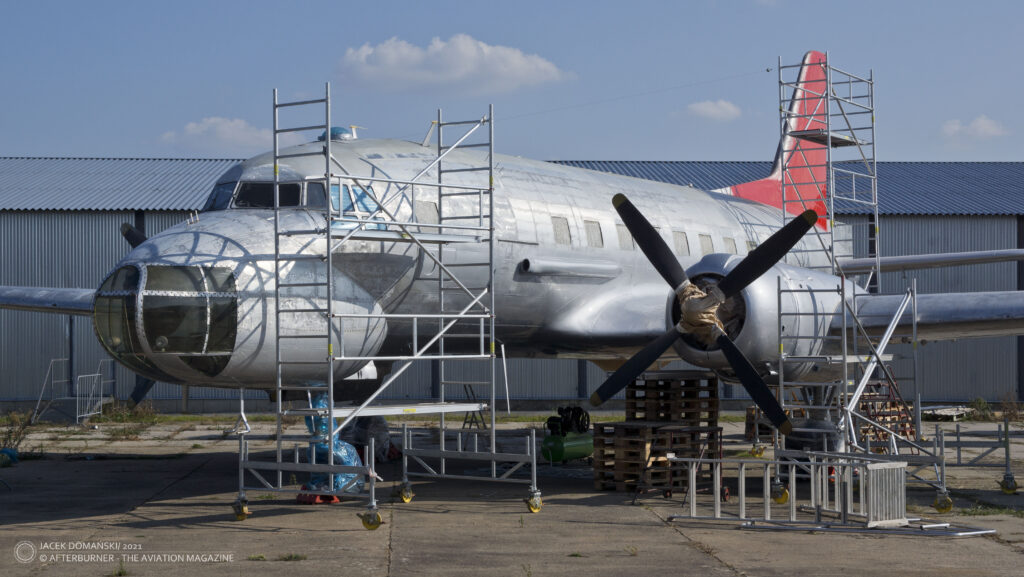 It´s no exaggeration to say that Ilyushin Il-14 belongs to aviation icons of the 1950s. That passenger airliner, developed in the Soviet Union as a successor to DC-3 and Li-2, performed its maiden flight on 1st October 1950 and four years later entered its operational service in Aeroflot.

Broadly speaking, the new aeroplane designed by the Ilyushin construction bureau was an upgrade of Il-12 transport and passenger aircraft, introduced in 1947. Although it was also intended to replace the Li-2 in the Soviet service, the Il-12 faced several technical problems during the development process and finally became a poorly received aircraft – with trouble-causing engines and low, uneconomic payload.

The Ilyushin Il-14 was free from technical problems of its predecessor. Its wings and tail section were completely re-developed and the airliner was powered by two reliable and popular in Soviet aviation Shvetsov ASh-82T-7 radial piston engines (a distant derivative of Wright R-1820 Cyclone). Shortly afterwards, the Il-14 has proven to be a robust, well-designed and sturdy aircraft, being capable to operate from rough airfields and in any climatic conditions.

The aircraft was manufactured in several different variants. Apart from a classic passenger airliner, they included civilian and military transport aeroplanes, a reconnaissance version, a special Arctic aircraft, geophysical and aerial photography variants, as well as long-range and VIP passenger adaptations. The Ilyushin Il-14 was also manufactured under license in the German Democratic Republic (by VEB Flugzeugwerke Dresden, as VEB 14) and Czechoslovakia (by Avia, as Av-14).

The total number of produced aircraft is not known – most sources are indicating 203 aircraft made in Czechoslovakia, another 80 in East Germany and, primarily, 1,065 aeroplanes of that type manufactured in Moscow and Tashkent. However, numbers closer to 2,000 examples are sometimes mentioned and there is also – a bit unrealistic (and still not proven) – information about 3,500 – 3,600 aircraft of that type made in total that can be found on Wikipedia and other web pages.

In 1956, a one meter longer variant for 32 passengers was developed, originally being designated as Il-14M (Av-14-32 in Czechoslovakia). And the aeroplane shown on the photo above is an example of that stretched version. It was produced by Avia Letňany aviation plant at the end of the 1950s, initially as passenger aircraft, and operated by the Czechoslovak Air Force.

Approximately ten years later, a decision was taken to convert the Czechoslovak military Av-14s into a special photogrammetric variant. Nine aircraft of different versions and origin were adapted to the new role. Among them, there was also the ´6102´.

All photogrammetric aeroplanes received their characteristic, bubble-glass nose for navigator / camera operator and were equipped with a set of East German-made photo cameras and even an onboard darkroom.

The ´6102´ aircraft was operated by the Czechoslovak (and then Czech) Air Force until 1994, when it was retired and handed over to the museum in Kbely. Nevertheless, for many years it was not exhibited there, being just stored behind hangars. With opening of the 2019 season, the Av-14FG was finally moved into the area accessible for public and, as you can see on the photo, some reconstruction works on the aircraft has only recently begun.