The traditional open doors event at Jaroměř airfield – which this year took place on 25th May – gathered there quite a lot of visitors, who enjoyed the Saturday at the aerodrome and the arranged flying displays. The event, organized by the local aeroclub, is usually combined with the Children´s Day and therefore creating the attractive possibility for the whole family, to spend a day among the aircraft.

That last weekend of May offered already two aviation events to be organized in Czech Republic, within the relatively short distance from each other. On the same day, two open doors actions were announced – apart from the Jaroměř Open Day, the biannual Čáslav Open Day in the 21st Air Force Base was also held on 25th May.

At both locations the set of interesting flying displays was promised, although of different type. Čáslav AFB tempted the aviation enthusiasts by the highlight of the open day – the unique combined display flown by Martin Šonka (Extra 330) and Ivo Kardoš (JAS-39 Gripen) – in addition to other Czech Air Force flying displays. Jaroměř, as usual, proposed an interesting journey through the aviation world achieved by the diversity of the displayed aircraft and, just as importantly, a very pleasant atmosphere of the aviation festival at the small airfield. 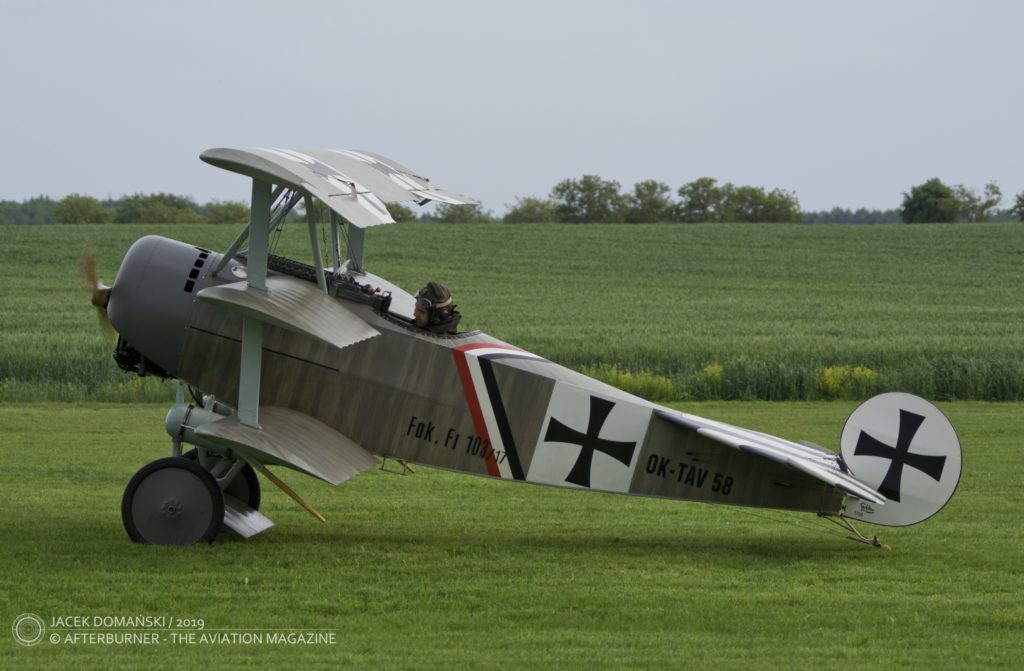 There is no surprise that we chose Jaroměř, as the main destination for that day. Especially because of the programme, which – from the aviation enthusiast point of view – seemed to be more interesting. The already announced flying displays offered the rich variety of aircraft – starting from the ULL aeroplanes and gliders, through quite a big choice of the flying replicas, to the high-level solo and team aerobatic displays. Additionally, the location of this airfield offers mostly a clear background, with just a few obstacles in the view, for taking some interesting aviation photos (while in Čáslav the only possibility is to take photos against the sun).

In this respect, it has to be noted that the programme in Jaroměř was also attractive for the general public, not only for the aviation fans. As mentioned earlier, this aviation event is usually combined with the Children´s Day, and this meant that there were several projects and games for children offered there. Among the aviation-related topics, there was a possibility to see the aeroclub aircraft and gliders close up and learn more about the club activities.

The aerodrome gates opened at 10 a.m. and the flying programme was planned for the afternoon. Until the beginning of the flying displays there was a possibility to enjoy the Children´s Day activities, then follow the arrivals of the aircraft participating in the displays, see most of them close-up at the static display and additionally talk with the pilots. 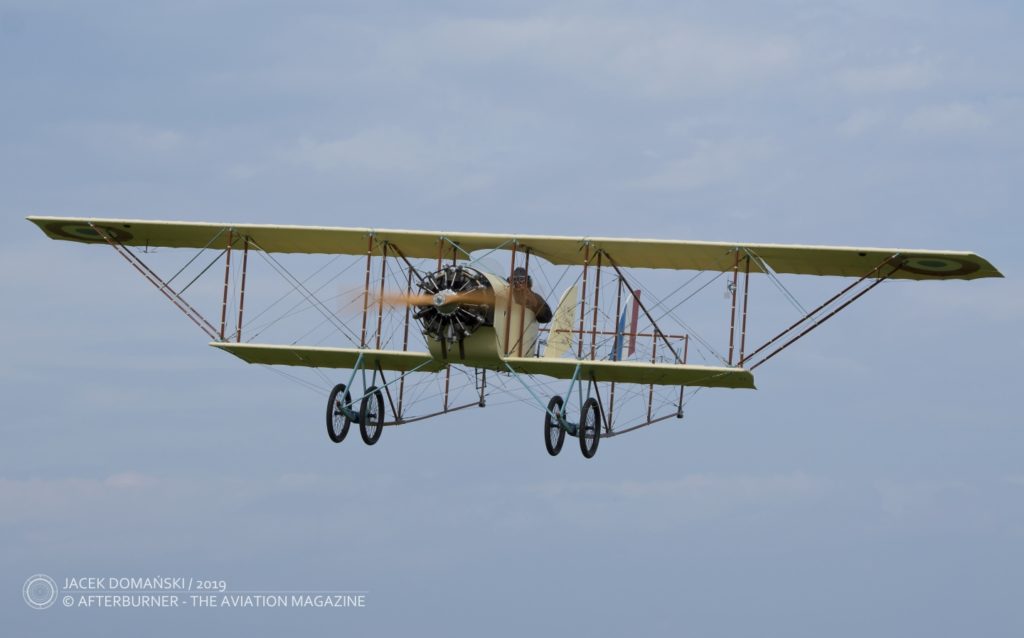 Starting from the morning hours the visitors to the airfield had the possibility to enjoy an interesting and wide presentation of the aviation RC models, performing also the flying displays. The spectators could see the wide variety of the model aircraft, including replicas of the aviation pioneers, aerobatic specials, modern and historical military aircraft and also jet-propelled aeroplanes. This presentation clearly proved what such hobby means and offers for both modeller and the spectators – when it is taken seriously and mastered to perfection.

Many of the exhibited models were resembling the original aeroplanes to their last details and were professionally made, so seeing them during the flying displays was with no doubts, an unusual experience – mentioning just a few examples as Me 163 rocket-powered fighter, L-39 Albatros jet trainer, C27J Spartan or Boeing Stearman biplane.

The flying displays began with the roar of jet engines – and this was the formation flypast of four L-39 Albatros training aircraft from the CLV Pardubice. After then, the display of the Great War Flying Circus followed, creating the clear connection between the previous RC model displays and the main flying programme.

The Great War Flying Circus already participated in the Jaroměř Open Day in 2018 and was then greeted enthusiastically by the spectators. This performance of RC model aircraft from the World War I, together with some pyrotechnic effect and the additional ground display, offers the marvellous spectacle from the Great War era. The aeroplanes are approximately 1:3 scale made models, representing the most-known aircraft from the World War I – Albatros D.V, Fokker Dr. I, Sopwith Pup, Morane-Saulnier N and many others. The Great War Flying Circus is flying their models from 2005 and since then participating in several aviation and model events in Europe, being the two-time winner of the ´Best of Show´ trophy at Internationaler Großmodellflugtag Lehrte, Germany. 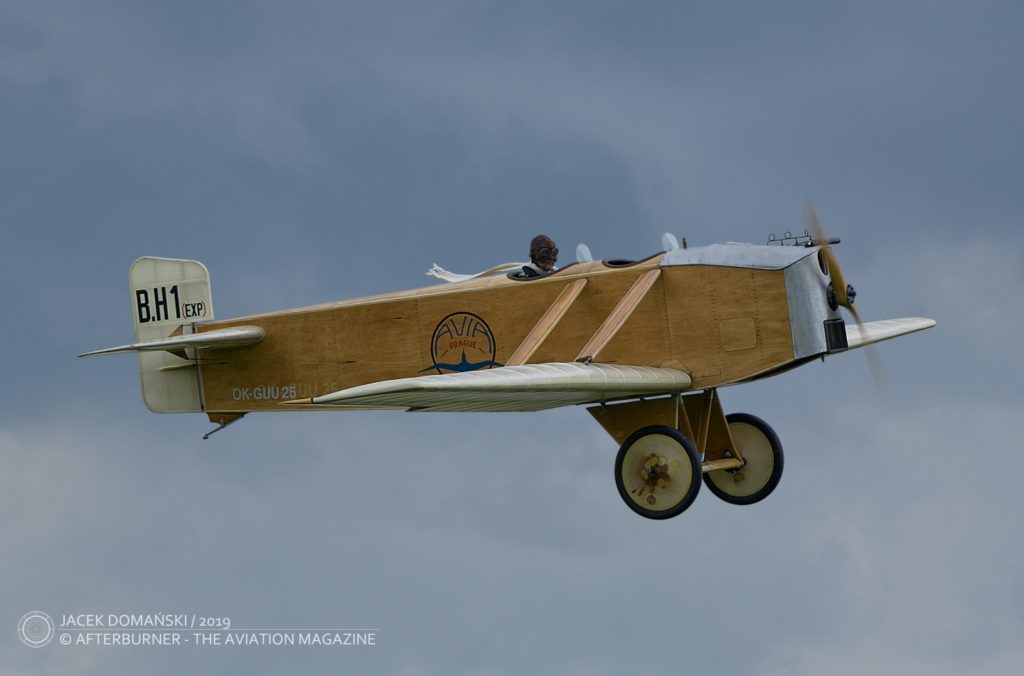 The aerobatic glider solo display followed shortly after the Great War scenes and, as the next point of the programme, the spectators were again taken back in time to the World War I era – for this second time because of the aircraft replica display. Letecké Muzeum Metoděje Vlacha in Mladá Boleslav featured some of their flying replicas in the Great War-related scene, including Caudron G. 3, Fokker Dreidecker and Curtiss JN-4D Jenny in solo and combined displays. Especially the Caudron G. 3 replica merits the particular concern, as this aircraft is not only participating in the local air shows but performed the remarkable flight to France and back last year (more about this flight could be find in one of our articles).

The impressive and dynamic display performed by Bell AH-1S Cobra helicopter was, undoubtedly, one of the highlights of the open day, being vigorously received by the spectators. This aircraft is commonly known from its operational use during the Vietnam War (although, the Cobras were in active service until 1990s, including the Gulf War and Somalia). The AH-1S that could be seen in Jaroměř during the marvellous display, was manufactured in 1977, previously served in US Army and currently is owned by the Heli Czech company.

And the ´Cobra´-related fun fact that should be mentioned is, that there exists a real possibility to see the slim profile of AH-1 in the Czech sky far more often. All through the will of the Czech government to replace the existing military helicopter fleet, based mostly on Mil-manufactured aircraft, by the Western constructions, preferably the American-made ones. And, as the rumours say, exactly the last member of the ´Bell Huey family´ – Bell AH-1Z Viper – is among the discussed aircraft (certainly, AH-1Z helicopter is a completely different aircraft from the original design, with upgraded avionics, modern rotor and transmission technology; however, the airframe still keeps the characteristic ´Cobra´ silhouette). 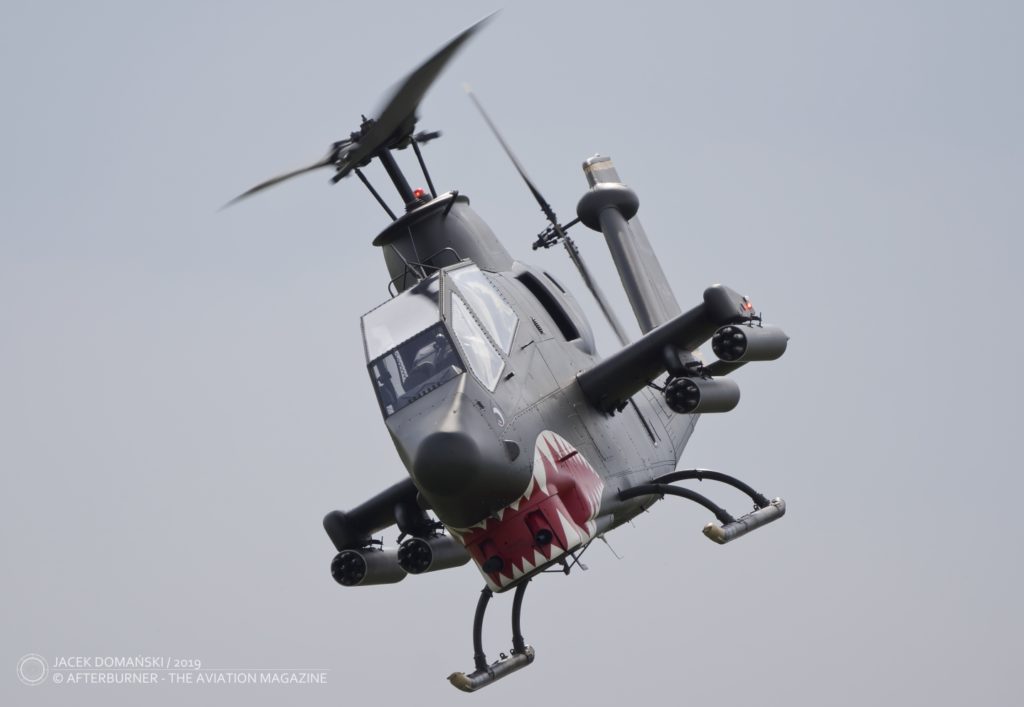 Coming back to the open day flying displays – after this little diversion – the next participant was the green-painted biplane and firstly it suggested the calmer display, in opposite to the previous one, performed by the attack helicopter. Surprisingly, this perception was wrong, as that aircraft turned out to be the 1:1 replica of Aero C-104S (the post-war development of famous German training aircraft Bücker Bü 131 ´Jungmann´). This C-104S flying replica is powered by the original ‎Walter Minor 4-III engine and in Jaroměř it performed another charismatic display, using the additional pyrotechnic effects.

Aero C-104S was followed by another Great War scene, again performed by the aircraft from the Letecké Muzeum Metoděje Vlacha – Pfalz E.I, Fokker E.V and Sopwith Camel, flying the team display with elements of dogfight.

Staying with the early aviation mood, the next solo display was flown by Avia B.H.1 – the replica of 1920 manufactured aircraft, built between 1997-2001 and powered by Walter Mikron IIIA engine from 1950s. This wooden, low-wing monoplane gracefully flew through the sky and together with the pilot, seating in this open cockpit aircraft and wearing the outfit from the era (note this long scarf!), created the perfect impression from the pioneer years of aviation.

The spectators were then suddenly snatched from this nostalgic mood of 1920s and ripped from the earth by the roar of the 330-horsepower, 6-cylinder aircraft engine. This was the clear sign that Petr Kopfstein´s aerobatic display has just begun, and his Extra 330SC took possession of the sky over the airfield. Kopfstein, being one of the most experienced and skilled Czech aerobatic pilots – he is the Master Class of the Red Bull Air Race participant since 2017 and Czech National Aerobatic Champion in Unlimited, Advanced, Intermediate and Sportsman categories – performed the marvellous and dynamic display, enthusiastically followed by the audience gathered at the aerodrome. 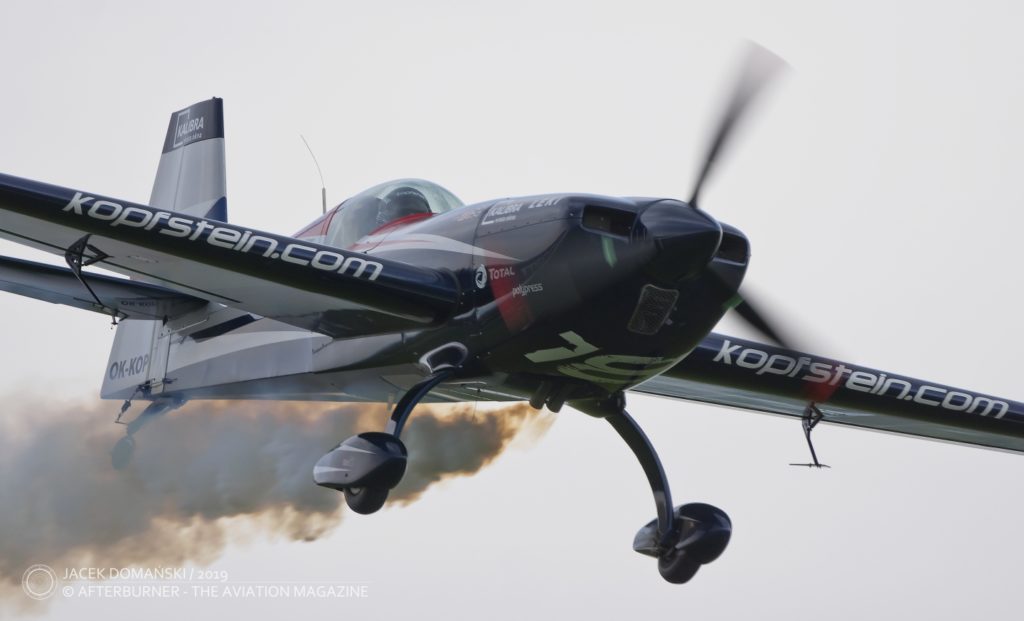 A short break from the aerobatic experiences was made by the 1940 manufactured Piper J3C-65, the oldest original aircraft at the show, and soon another aerobatic display attracted the visitors´ attention. The Flying Bulls Aerobatic Team, with their home at the Jaroměř airfield, started their team aerobatic display, being also the final point of the open day flying programme.

The team has already performed their show earlier that day in Čáslav, during the previously mentioned 21st AFB Open Day event held there, and due to the technical reasons one of team aircraft had to stay in Čáslav. For this reason, the display in front of their hometown crowd was performed by just three XA 42 aeroplanes. This does not mean, however, that the performance was not attractive. The warm welcome the team received after their show, was the best evidence of excellent aerobatic show.

The Flying Bulls Aerobatic Team display concluded the Open Day at Jaroměř airfield, the great event, during which not only the aviation fans but everyone could spend the perfect day among the aircraft. And even though the weather turned ugly in the afternoon and there were a few moments of rain, they did not cause the public to leave the airfield. The attractive flying displays, possibility to see the aeroplanes close-up, chat with the pilots and the rich accompanying programme for children made the most of the airfield visitors to stay there until the final display. 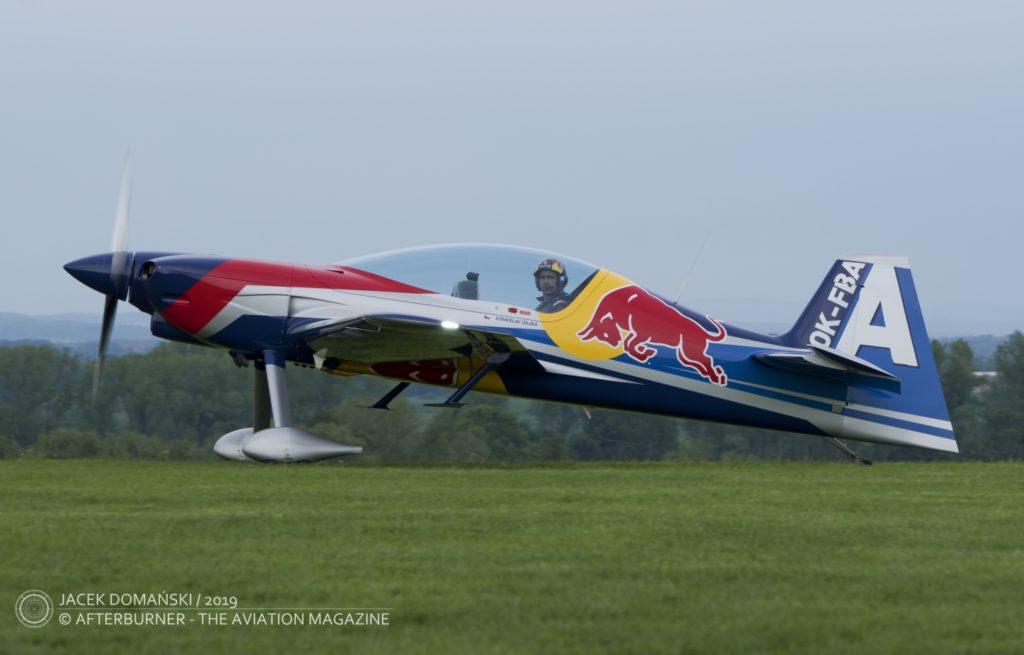 This was not the first time we have visited such local event, organized by the aeroclub (actually, we are visiting Jaroměř open days on regular basis). And always, at this opportunity, we have to emphasize the atmosphere of those local shows, an atmosphere that is hardly to feel at the large-scale actions and the crowded airfields. That´s why we would like to encourage you to visit your local airfield from time to time, certainly, not only during the open day events. There you might be nicely surprised that small aerodromes can also offer the great aviation experience, allowing you to learn more about the performed activities and meet people who share the same passion for aviation.