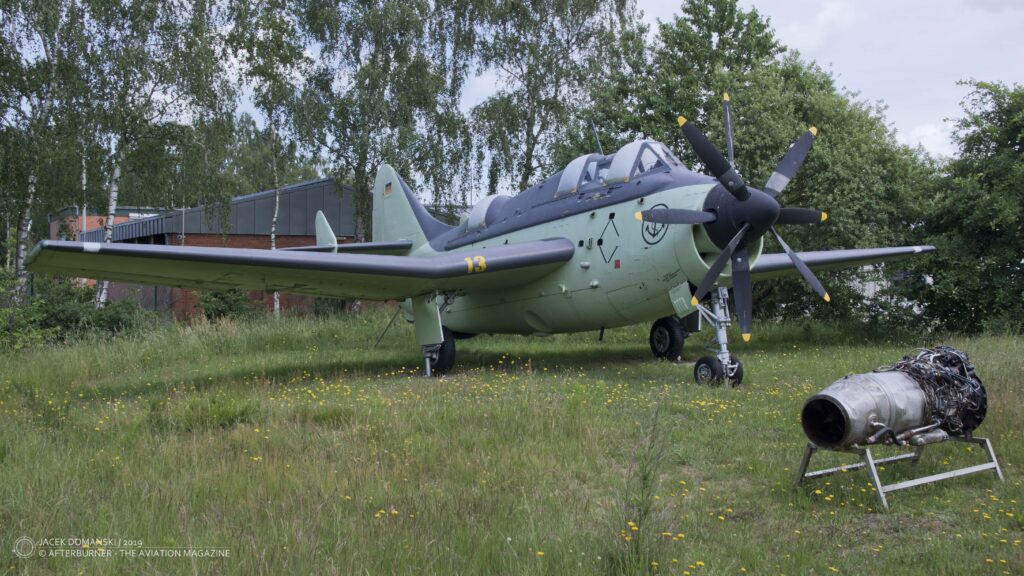 The Fairey Gannet is commonly considered as one of the ugliest aircraft made during the Cold War era. Therefore seamlessly fitting into a general – mostly prejudiced – opinion about the look and overall performance of the Royal Navy carrier-borne aircraft of the 1940s and 1950s. However, sometimes appearances can be deceiving and Gannet is the best example.

Already in 1945, the British Admiralty issued a GR.17/45 requirement for a new anti-submarine and strike aircraft for the Fleet Air Arm. It was responded by Fairey and Blackburn, developing and building prototype aircraft designated ´17´ / Type Q and B-54 / B-88, respectively.

The prototypes proposed by the Blackburn company were both a monoplane with inverted gull-wing and a tricycle landing gear, crewed by a pilot and observer having their seats in tandem configuration under a joint canopy. Nevertheless, the aeroplanes varied in a type of used powerplant. The B-54 was powered by a conventional piston engine, while the B-88 featured a gas turbine and two, contra-rotating propellers.

The aeroplane offered by Fairey was, from the very beginning, designed as turboprop aircraft. Initially, the team of designers led by H.E. Chaplin took into account a turboprop engine made by Rolls-Royce but finally it turned out to be insufficient for the new aircraft. As a result, Chaplin went for the same solution used already by Blackburn in the fourth evaluation of their aircraft – Armstrong Siddeley double turboprop engine called the ´Double Mamba´.

The Double Mamba was made of two Armstrong Siddeley Mamba engines, placed side by side and driving two, contra-rotating propellers through a complicated and sophisticated system of shafts and gears. That engine of unconventional design was developed in the late 1940s and was capable of generating 2,200 kW or more. One of interesting characteristics of the Double Mamba was that one of the engines could be turned off during flight, to save fuel and enhance the operational range. That would, obviously, result in stopping one of the propellers. Another interesting fact is that – being made as a gas turbine – the Double Mamba could run both on kerosene, special turbine fuel and even diesel fuel.

However, the engine was not the only interesting feature of that aircraft. Another extraordinary system was related to its wings that were double-folding into a characteristic, Z-shaped, pattern.

The prototype designed by Fairey performed its maiden flight on 19th September 1949, followed on the second day by the first flight of Blackburn-made aeroplane (although only its piston-propelled variant). On 19th June 1950, the Fairey landed on deck of HMS Illustrious, and became the first turboprop aeroplane ever to land on an aircraft carrier. Shortly thereafter, the Admiralty decided that the new FAA aircraft had to be equipped with radar and thus forcing the manufacturers to redevelop their prototypes, as a radome and third seat for radar operator had to be added.

That additional requirement was the reason of somehow strange look of the Gannet. Initially, with the crew of two, the pilot seat was placed forward, high over the engine, to ensure the best possible view necessary for aircraft carrier operations. The observer was seated behind, under a separate canopy. Then, the third crew member was added, having its own cockpit located in the back of the fuselage, over the wing trailing edges.

Eventually, the design proposed by Fairey was approved by the Royal Navy and an initial order for one hundred aircraft, officially designated Gannet AS.1, was signed. In addition, the training variant of the aeroplane was also required. The trainer received a T.2 designation and performed its maiden flight in August of 1954.

A total number of 348 Gannets was made until 1959, when the production of that aircraft was ceased. Over 250 aeroplanes were made in the basic, anti-submarine variants AS.1 and AS.4. Nevertheless, the active service of those Gannets was both intensive and short – by the mid-1960s they were replaced by newer designs.

An alternative purpose, not taken into consideration in the end of 1940s, secured a far longer service for the Fairey Gannet. It were Airborne Early Warning and Electronic Countermeasure variants that remained in active service until 1978. There were more than 50 aeroplanes of the abovementioned versions built, both as newly manufactured and converted from the anti-submarine ones.

Caudron G.3 replica among the participants of 2019 Aviation Fair

Without any doubts, the era of aviation pioneers is one of the most interesting periods in the aviation history. The remains of the early aircrafts could be mostly seen only in the aviation museums, and […]