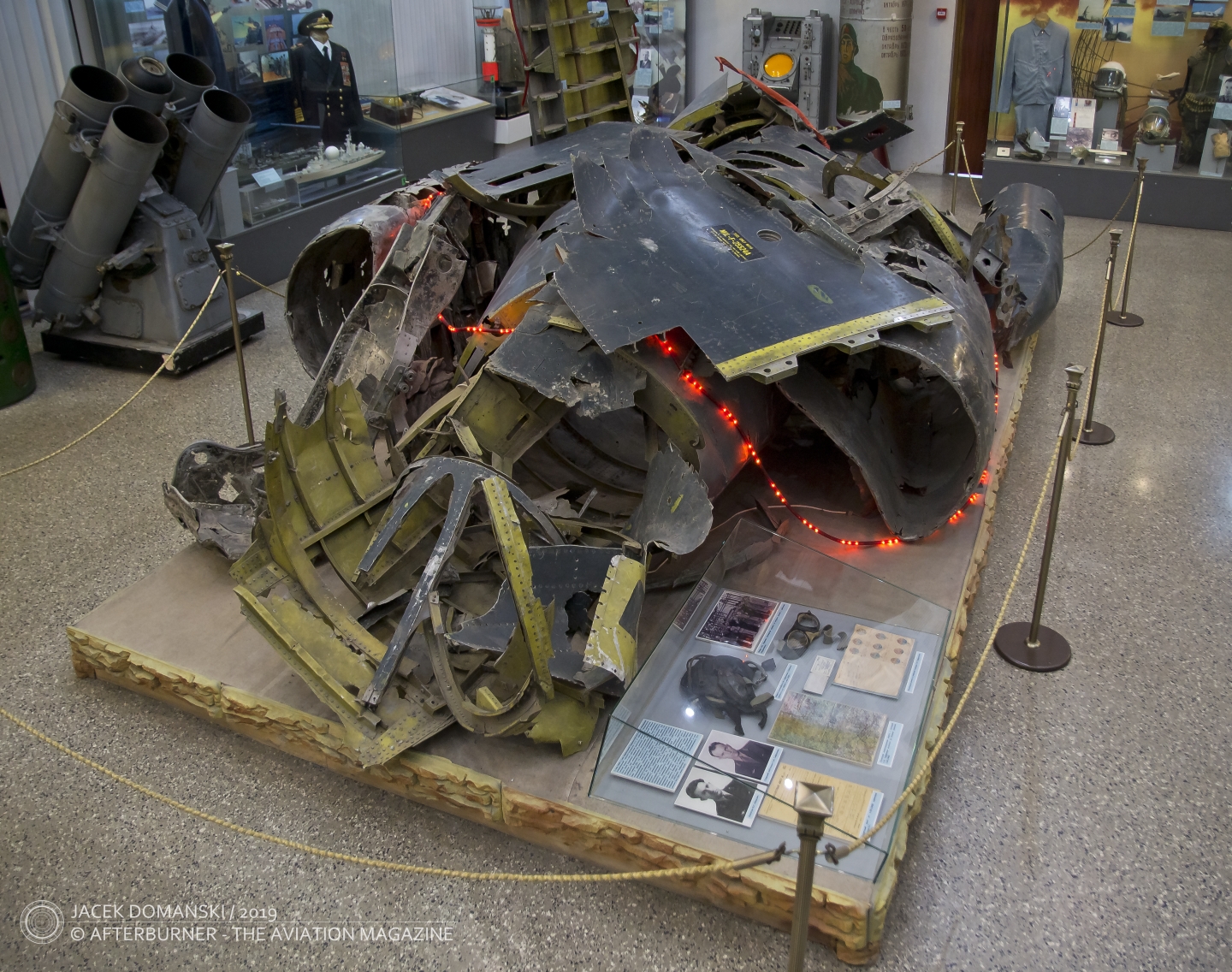 The wreckage of Lockheed U-2C, United States spy aeroplane (code name Article 360, 56-6693), that was shot down near Sverdlovsk (today Yekaterinburg) on 1st May 1960. The aircraft is currently on display in the Central Armed Forces Museum in Moscow.

Lockheed U-2, also nicknamed ´Dragon Lady´, is a single-engine, ultra-high altitude reconnaissance aeroplane, and one of the most-known aircraft from the Cold War era. Although, not only the impressive possibilities of U-2 were the reason this aircraft owes its fame to. What made it one of the Cold War icons was the so-called ´U-2 incident´, when the aircraft was shot down in the middle of the Soviet Union territory in 1960.

The U-2 was developed as the answer for the United States need to perform a strategic reconnaissance over the Soviet Union territory. In 1950s, all that was available for the American intelligence, were the photos taken by the Germans during the World War II and some additional materials taken secretly during the official diplomatic visits to Soviet Union.

The reconnaissance aircraft existing at that time were vulnerable to Soviet air defence fighters and rockets, so the development of completely new spy aeroplane began in 1953. The new aircraft had to be able to cross the Soviet territory at  altitude of 70,000 feet (21,300 metres) and provide day and night, all-weather intelligence, being beyond reach of Soviet radar, fighters and missiles. This special requirement related to the altitude was the result of the strong belief, that Soviet radars had no capability to track targets above 65,000 feet (19,500 metres) and knowing the 45,000 feet (13,500 metres) altitude limit of MiG-17 interceptor.

On 1st August 1955, the new reconnaissance aircraft performed its maiden flight and soon, in the next year, became operational, performing the spy flights over the Eastern Europe. The operational usage of U-2s was the joint project of USAF (providing pilots and training) and CIA (operating the reconnaissance equipment, providing the air bases and the security). The development of U-2 aeroplane and the first flights were, certainly, highly classified.

The reconnaissance flights over the Eastern Europe and Soviet Union were, of course, noticed by the Soviet air defence – but the American authorities were convinced that the idea of ultra-high altitude aeroplane was successful. The photos taken by U-2s showed the Soviet fighters trying to intercept the spy aircraft, but not available to reach the U-2 altitude. It also seemed, that the Soviet air defence cannot track the whole operational route of U-2, being not aware about the flights over Moscow or Leningrad.

During the first years, the U-2s were gathering general information about the Soviet military installations and searching for ´Bisons´- Myasishchev M-4 heavy bombers. With the launch of the first artificial Earth satellite ´Sputnik 1´, on 4th October 1957, the Soviet ballistic missile programme and space programme became the main intelligence targets.

An initial success often leads to forget about the enemy and the fact, that he gathers more experience in time. And this exactly happened during the U-2 missions – on 9th April 1960 the U-2C flown over the Soviet territory and four top secret military targets: an airbase, two missile test sites and a missile range. That mission was another reconnaissance success, and another one was planned to be flown shortly after.

The ´Grand Slam´, as the cover name of this flight was, had to be yet another spectacular flight over the Soviet territory. The U-2C piloted by Captain Francis Gary Powers took-off from Peshawar air base in Pakistan on 1st May 1960, and had to overfly the Soviet Union, finally landing at Bodø, in Norway.

However, this flight was expected by the Soviet air defence, which also tracked the entire previous flight. Despite the fact, that several initial attempts to intercept the Powers´ U-2 failed, the reconnaissance flight was terminated near Kosulino, Sverdlovsk Oblast.

It was the recently introduced surface-to-air defence system S-75 Dvina (NATO reporting name: SA-2 Guideline) and one of its missiles launched by the battery commanded by Major Mikhail Voronov, that reached the Gary Powers´ aeroplane. Powers managed to bail out, safely parachuted and was captured shortly after.

The ´U-2 incident´ caused a diplomatic crisis between the United States and the Soviet Union, especially that Powers was shot down a few days before the planned Four Power Paris Summit and Eisenhower´s visit to the Soviet Union.

Powers was sentenced to ten years, first three of them in prison then seven years in  labour camp, but in February 1962 he was exchanged for Rudolf Abel, the Soviet spy captured by FBI in 1957. Certainly, this exchange took place at the famous Glienicke Bridge in Berlin, nicknamed ´the bridge of spies´.

Due to the ´U-2 incident´ the US reconnaissance activity was frozen for the time needed to create new procedures and related policies. The U-2s soon returned to their missions, but the era of the Soviet Union long-distance overflights was gone, and they never violated the Soviet airspace anymore.

Francis Gary Powers returned to flying in 1962, working as a test pilot for Lockheed, then became a helicopter traffic pilot reporter for KNBC News Channel 4. He died on 1st August 1977, when his Bell 206 Ranger crashed in California.