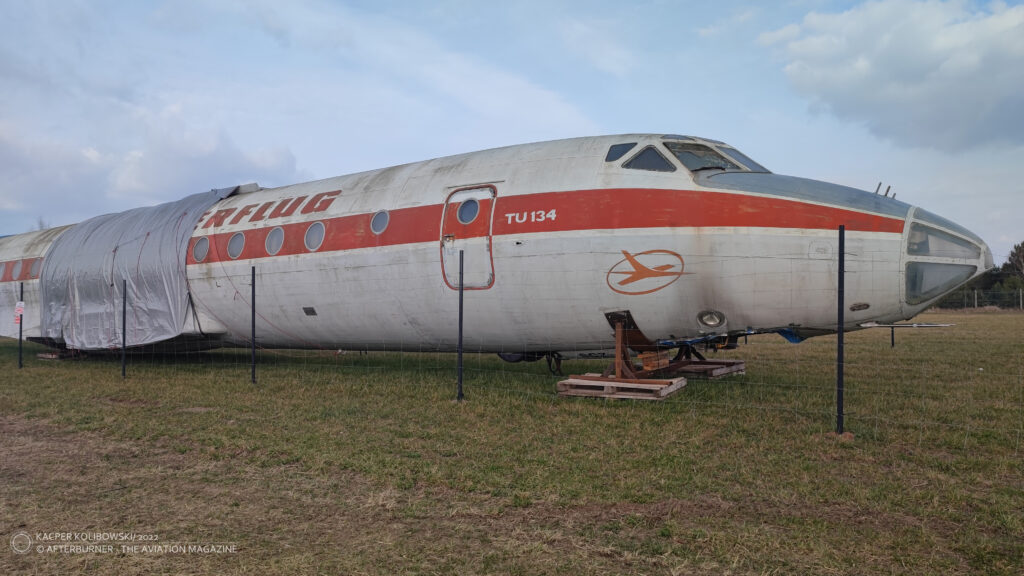 Recently, we have learned about the new aviation museum that is going to be opened next year in central Poland. Its first exhibit has already arrived to the location, so we were just waiting for the chance to go there and check it out.

The project was initiated by Seweryn Borkowski, the CEO of Kujawska Fabryka Maszyn Rolniczych ‘Krukowiak’, a local agricultural machinery factory. Thirteen years ago, together with his father and brother, he created the Museum of Agricultural Technology and Farming in Redecz Krukowy, a village located near Włocławek, in the Kuyavia region of Poland. In the following years, the initiative grew up and now includes two more museums – the Kuyavian Museum of Arms, Science and Technology and the Kuyavian Railway Museum, both located at the same site.

In late 2021, Seweryn Borkowski’s plans to create another private museum, this time focused on aviation, were publicly disclosed. That happened on the occasion of delivery of the first exhibition aircraft to the site where the new museum is going to be established. The aeroplane, due to its size and the fact that it was transported by three trucks, did not avoid the attention of local residents and media.

Tupolev Tu-134, as this is the aircraft we are referring to, arrived to the vicinity of the Aero Club of Włocławek, at Kruszyn airfield, on 26th November 2021. And recently, taking advantage of the upcoming spring and slightly better weather conditions with no snow, we have visited the location and took a quick sneak peek at the airliner.

Firstly, however, a few words should be written to introduce the aircraft itself.

The decision to create the Tu-134 was taken at the Tupolev design bureau in 1963, as a result of the desire to replace Tu-124 twin-engine regional airliner. The new aircraft had to be a next generation passenger jet of short and medium range, being an equivalent of Western counterparts and offering better travel comfort than its predecessor.

Initially, the aircraft was given designation Tu-124A and developed not as a new aeroplane, but a modernized variant of the Tu-124. However, due to many differences compared to the older design, it was eventually re-designated Tu-134. The aeroplane made its first flight as early as on 29th July 1963. However, it was officially demonstrated to the general public only two years later, on 14th August 1965. Later that year, nine more examples of the aircraft were built and used for flight testing purposes. In 1966, serial production of the Tu-134 began at the Kharkov Aviation Factory (Харьковское авиационное производственное объединение) and, at the same time, manufacturing of its predecessor was cancelled.

The new Tupolev airliner had a T-shape configuration tailplane and was powered by two Soloviev D-30-II engines, mounted on both sides at the rear part of the fuselage. The aeroplane had a relatively high cruising speed, due to its swept wings with a significant, 35⁰ angle that additionally had also a negative lift. However, that design also required a relatively high speed for take-off and landing, as well as use of rather long runways.

Later, improved versions of the Tu-134 were, despite other modernizations, already equipped with a thrust reverser that allowed to reduce the stopping distance after landing. The aircraft had a range of up to 3,000 km and, depending on version, could carry between 72 and 96 passengers.

The Tu-134 entered service in 1967 with Aeroflot, national carrier of the Soviet Union. Shortly thereafter the aeroplane was also introduced to a few local Soviet airlines. It soon proved to be an aircraft so successful to attract international interest. As a consequence, the Tu-134 began being acquired by airlines from other countries of the world, especially those from the Eastern Bloc. Among them there was Interflug, national carrier of the German Democratic Republic. That company finally operated twenty-three Tu-134 airliners. And exactly the aircraft of such origin  was recently brought to Poland and became a kernel of the new aviation museum.

The aircraft which will soon become part of the exhibition in the new museum near Wloclawek is Tu-134A, c/n 9350913, manufactured in 1969. In December of that year, the aeroplane was handed over to its first operator – the Luftstreitkräfte der Nationalen Volksarmee (Air Forces of the National People’s Army) of the GDR. During its military service, the aircraft flew with the tactical number ´177´.

After a few years on duty, the aeroplane was withdrawn from the air force and transferred to civil aviation. On 14th November 1975, it was acquired by the abovementioned Interflug East German Airlines. Initially, the Tu-134A received civil registration DM-SCZ that was later, on 2nd April 1981, changed to DDR-SCZ. And exactly that second registriation can still be spotted on its fuselage, just like the Interflug livery from the era.

After being withdrawn from active operation, the aircraft was, since 8th March 1986, exhibited in Museum Bernsdorf in Dresden. Subsequently, in June of 2001, it was transferred to the Luftfahrt und Technik Museumspark (Aviation and Technology Museum Park) in Merseburg near Leipzig.

In 2020, due to closure of that museum, the aircraft was put up for sale and then, at the end of 2021, purchased by its new owner from Poland. Currently, the Tu-134A DDR-SCZ is waiting at its new home to be re-assembled and exhibited. Obviously, we are keeping our fingers crossed and wait impatiently to see it in all its glory, hopefully being also at least slightly restored.

Because of its size, the airliner will be a part of an open-air exhibition, nevertheless, a dedicated hangar is going to be constructed at the location, to house other aviation exhibits. The building is scheduled to be completed by the end of this summer. As of today, over a dozen various aircraft have already been acquired for that collection and are expected to be displayed in the museum. The search for more continues.

The museum is expected to be opened in 2023. Certainly, we are going to monitor the progress of works on creating it. Once it is officially opened, we are obviously going to bring you a report from our visit in that museum and tell you about our impressions regarding the collection of aircraft gathered there.

A fortnight ago, we have written about preparations for Cold Response 2022 – a NATO military exercise organized in Norway. Although being organized biannually since 2006, this year the training reached its largest significance. It […]