Lake Ohrid, one of Europe´s deepest and oldest lakes, is the popular touristic destination located in the centre of the Balkan peninsula and the landmark of the Republic of Macedonia (also known as FYROM, FYR Macedonia or, perhaps, according to the latest news, soon adopting the new name of the Republic of North Macedonia). The most-visited city along the lake is, without any doubts, the city of Ohrid, famous of its picturesque old town houses and churches.

Like any other European holiday destination, the high season at Lake Ohrid means months June to August, but many tourists are going there as soon as the early spring – those who happened to be there at the beginning of May could be surprised by the tactical display performed by the joint forces of the Macedonian Police. 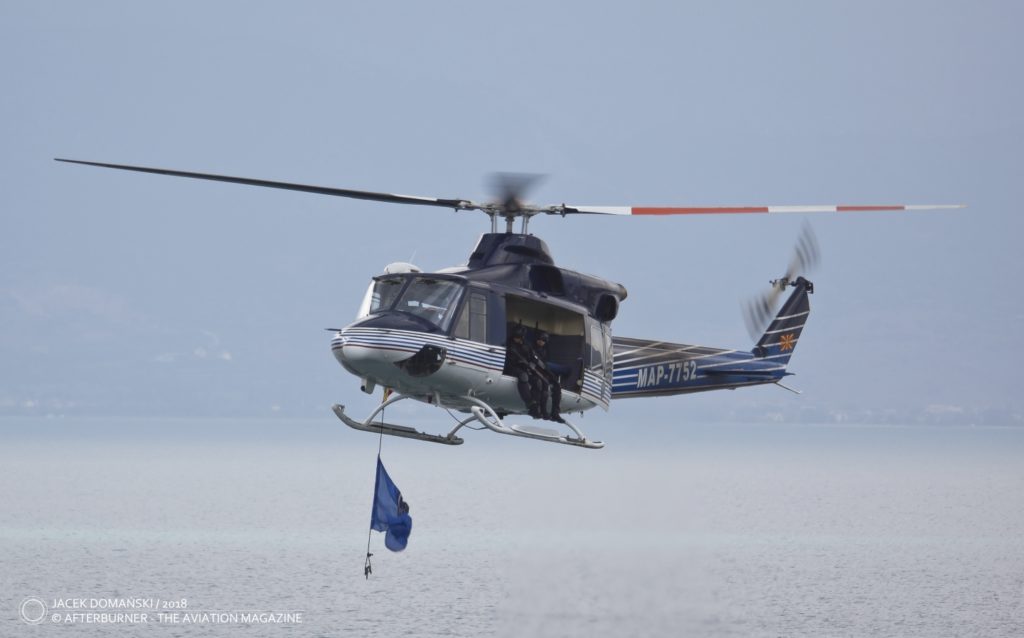 7th of May means Police Day in Macedonia and several events are usually organized across the country, including the commemorative acts and active displays. One of such displays took place on 5th May 2018 in the Ohrid bay, observed by the large number of Ohrid inhabitants and few surprised tourists.

Although the scenario of the exercise was rather simple – the group of armed terrorists has seized the cruise boat, taking the hostages and the police forces had to take over the boat and release the hostages – the display was really attracting the attention of the spectators, offering them the interesting and dynamic show. Three components of Macedonia police forces participated in the exercise – the local Lake Patrol Police (Езерска полиција), Special Operations Unit – Tigers (Единица за специјални задачи – Тигри) and the Helicopter Unit (Хеликоптерска единица). 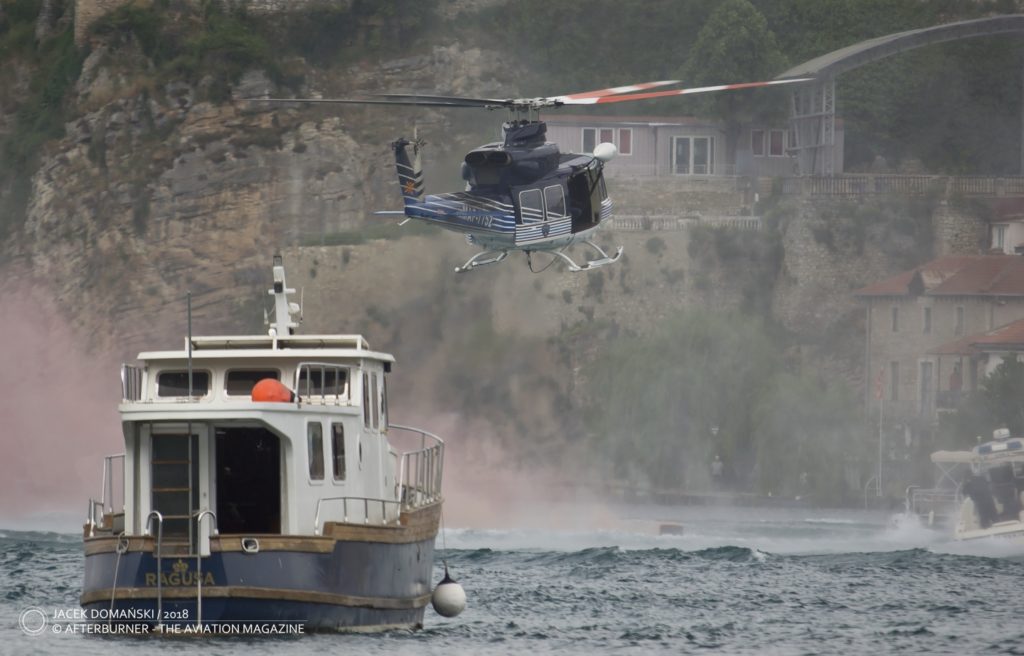 The cruise ship ´Macedonia´ was the target, and several boats from the Lake Patrol Police and Tigers were circling around it, supported by the police helicopter and the scuba divers. Smoke, explosions and the gunshots were all around, the Tigers were roping down from the helicopter, finally catching all the ´bad guys´ at the quay – in front of the spectators. The display was performed in the proximity of the Ohrid harbour, with the amazing view of the Ohrid fortress and the old town as the background. 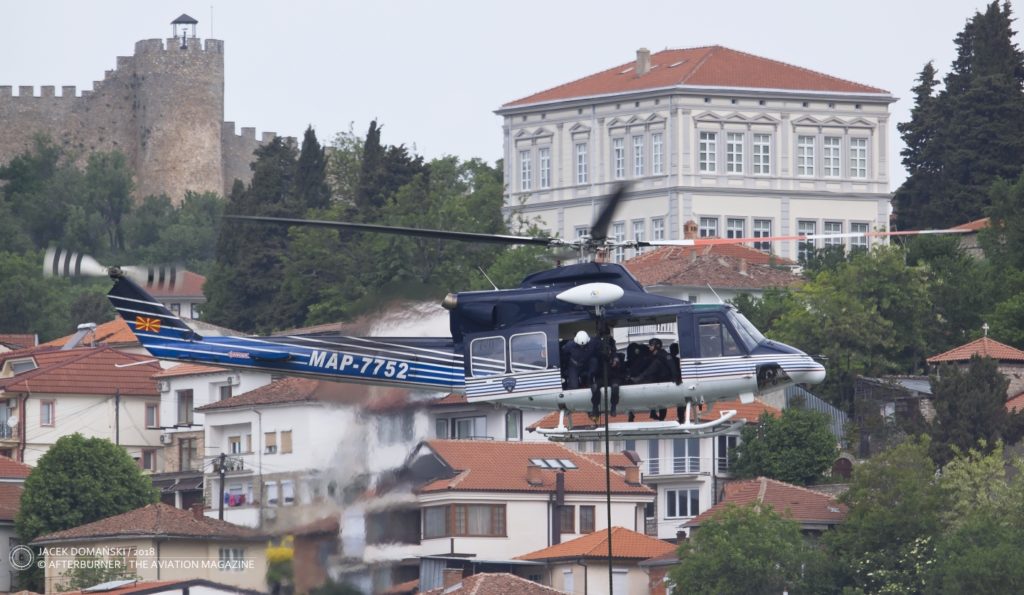 Bell 412EP in the centre of Ohrid town

As the addition to the exercise, the static display of the Macedonian police equipment was arranged near the quay. The boat-parade of all units participating in the exercise, with the helicopter flying over them, was the final stage of each display. The exercise was visited by several Macedonian government representatives, including the Interior Minister of Macedonia, Oliver Spasovsky. 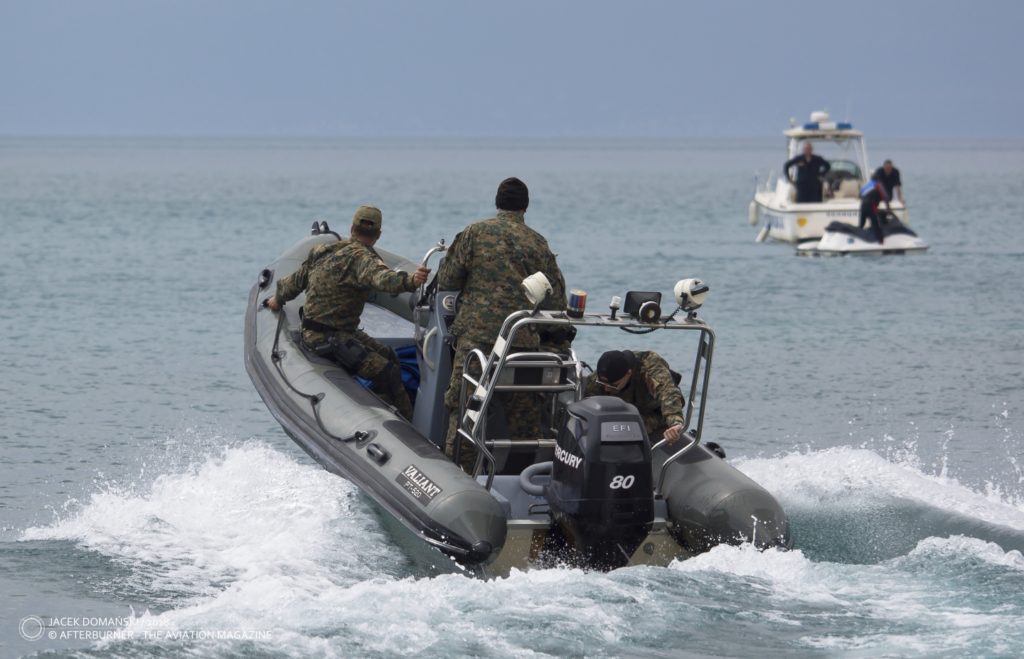 “Tigers” and Lake Police in action

From the perspective of an aviation enthusiast this was solely the ´one-man-show´, as the only aircraft participating in the exercise was the police Bell 412EP helicopter. Nevertheless, the display was worth noticing – not only there was a perfect opportunity to take some interesting shots of this aircraft, but additionally they could be taken with the beautiful background of Lake Ohrid and the Ohrid monuments. Especially that the display was repeated a few times during the day, allowing to see the exercise area from different view points around the old town. 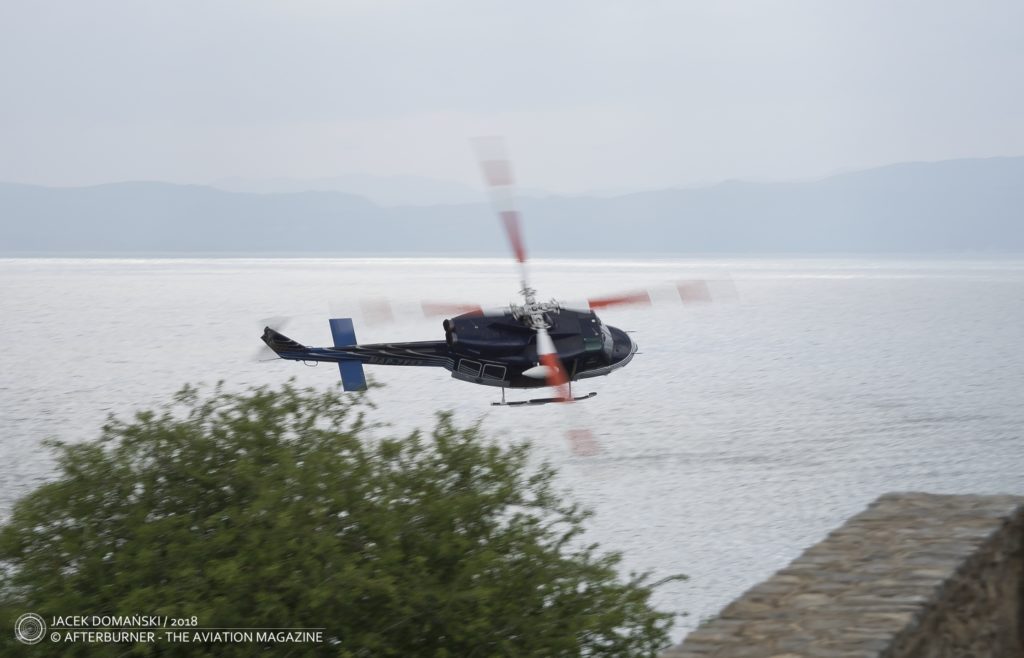 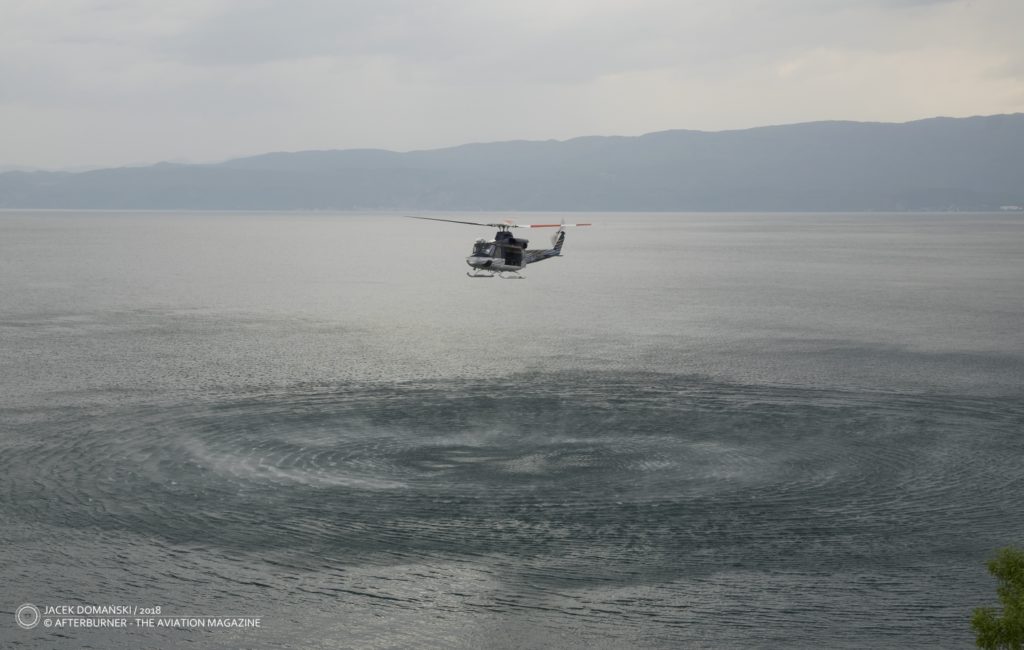 Bell 412EP over the Lake Ohrid 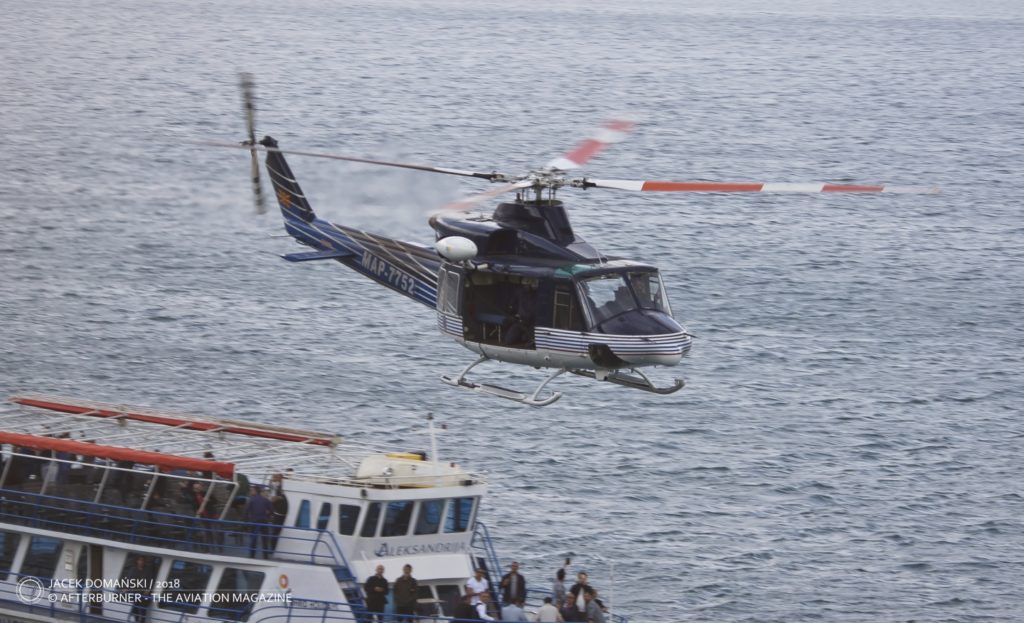 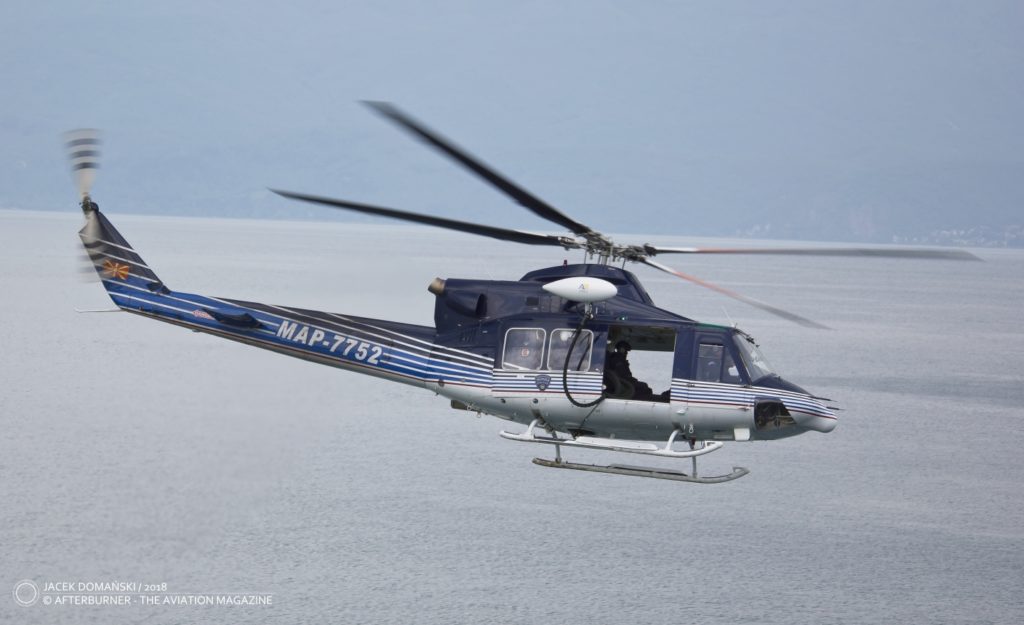 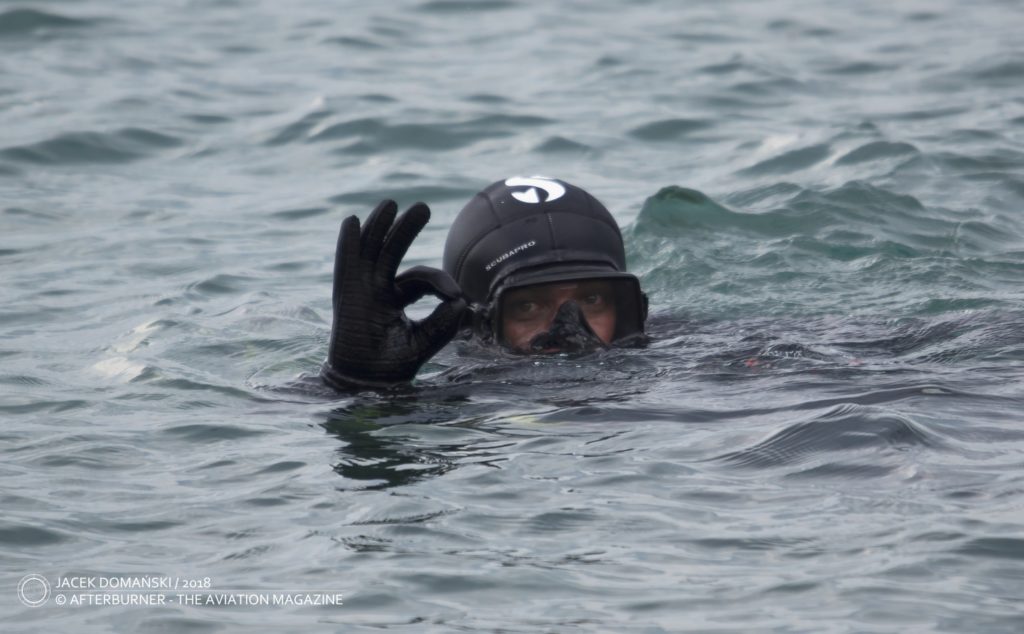 That was an OK show 🙂