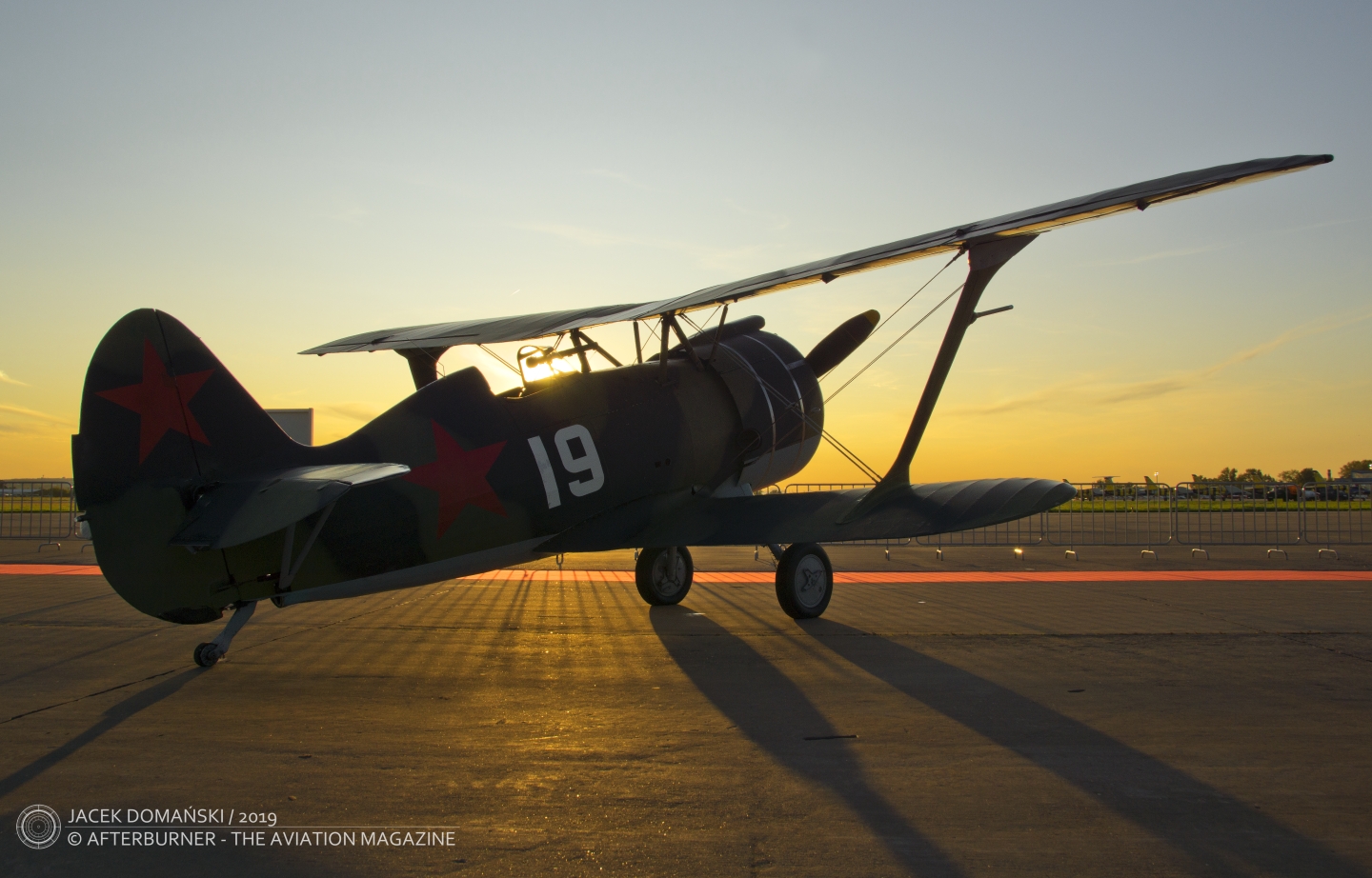 A biplane fighter aircraft from the 1930s, Polikarpov I-15bis, exhibited at the static display of XIV International Aviation and Space Salon MAKS-2019, in Zhukovsky.

The roots of I-15bis go way back to 1929, when the 5th fighter for the Soviet Air Force was developed by N.N. Polikarpov and D.P. Grigorovich. Manufactured between 1931 and 1934, the I-5 became the basic Soviet fighter and was also used for training purposes.

Then, in 1933, the advanced modification of I-5 came on the air – Polikarpov´s fighter designated as I-15, with the characteristic upper gull wing. Manufactured in Soviet Union and later also in Spain, the I-15 had his operational premiere during the Spanish Civil War, where it was nicknamed ´Chato´ (snub-nose).

The I-15bis (sometimes also designated as I-152) was an advanced variant of the basic construction with more powerful engine, flat upper wing, more robust construction and several other small, but significant changes. The aeroplane performed its maiden flight in 1937 and was operationally used during the last months of Spanish Civil War (nicknamed ´Super Chato´) and at the Battles of Khalkhin Gol in 1939, a number of I-15bis were also sent to China.

During the II World War era, the I-15bis were used in the ´Winter War´ between Soviet Union and Finland (1939-40) and then, even already considered as obsolete, at the early stage of Eastern Front campaign, where they performed limited operational flight until 1942. The last I-15bis aircraft remain in service until 1945, in the Far East, however performing the containment missions, instead of real combat.

The I-15bis ´white 19´ exhibited at MAKS-2019 belongs to the collection of historical aircraft own by the ´Winged Memory of Victory´ (Крылатая память победы) foundation. The aeroplane was restored to the airworthy condition by the ЗАО ´Авиареставрация´ in Novosibirsk. It is noteworthy, that I-15bis is still powered by the original engine, unique among the restored Soviet aircraft. In addition to I-15bis, the foundation also operates the training version I-15 DIT / И-15 ДИТ and next modernized variant based on I-15 – I-153 / И-153 ´Чайка´ biplane fighter.