The fascinating guide to the world of rotorcrafts – Helicopter Show 2018.

The Helicopter Show – organized already for nearly two decades now – has become one of the significant aviation events that are opening the airshow season. The 17th edition of the show took place on 11th and 12th May 2018, at Hradec Kralove airfield.

The Helicopter Show is, from the very beginning, not only the public presentation of the various rotorcrafts, but this event is mainly the opportunity for the professionals involved into the air rescue service and other emergency services to meet and discuss the organization and the operation of the Integrated Emergency System. The usual component of the Helicopter Show professional activities is the educational events programme, offered for schools of all stages. 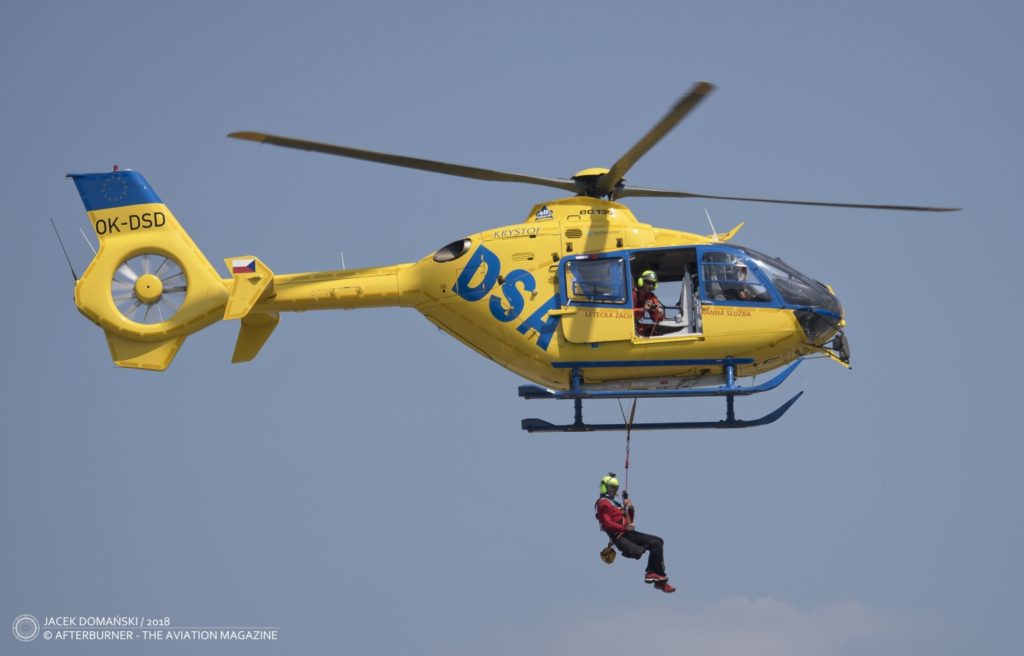 There was no exception during the 17th edition of the Helicopter Show and the schedule was divided into two main parts. The professional day was organized on Friday – the emergency service personnel had the opportunity to attend the rescue service related conferences and seminars, and then gain additional experiences during the practical training (the simulation of the passenger train evacuation). The airfield gates opened for public on Saturday, for the classic airshow event, certainly focused on the rotary-wing aircraft. 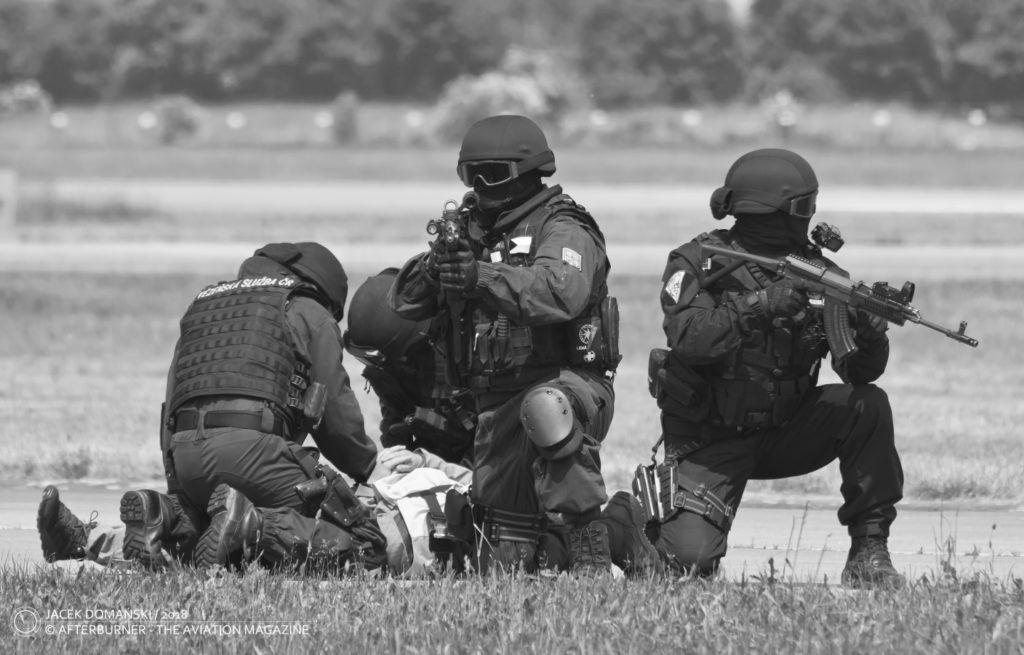 Prison Service of the Czech Republic during the dynamic display

The most visitor-attracting part of the Helicopter Show programme is, without any doubts, the simulation of the multiple vehicle collision. This display, showing the coordinated work of several emergency services during the serious traffic accident, is already a regular element of the Helicopter Show, being performed there every year. Notwithstanding the annual replay, the organizers are keeping this simulation fresh and attractive by adding some new elements to the general concept of the traffic accident. This year it was the prison guard that was participating in the display and among the cars involved in the collision there was the prisoner transport vehicle. The evacuation of the prisoner from the accident spot, performed by the prison guard unit, added even more drama to – already dynamic and fascinating – the multiple vehicle collision scenario. 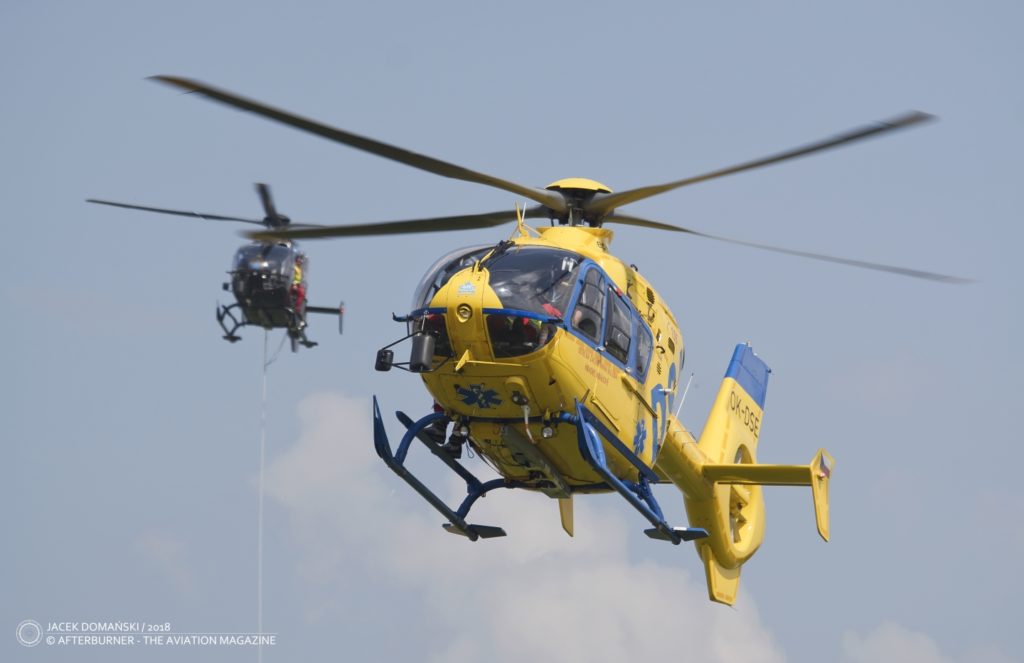 The highlight of the show – simulation of the multiple vehicle collision

The 2018 edition of the Helicopter Show offered the impressive variety of the static and dynamic aircraft displays. They were, obviously, focused on the rotorcrafts and one of the highlights of the show was the flying display of the sole airworthy Bristol Type 171 Sycamore. This aircraft, designed in the late 1940s and introduced in 1953, was the first British helicopter to receive a certificate of airworthiness, and the first British-designed helicopter to serve with the Royal Air Force. Bristol 171 is currently a part of the Flying Bulls collection and during the Helicopter Show the Sycamore display was flown by Siegfried ´Blacky´ Schwarz. Before and after the flying display the Bristol 171 helicopter was also available at the static exhibition. 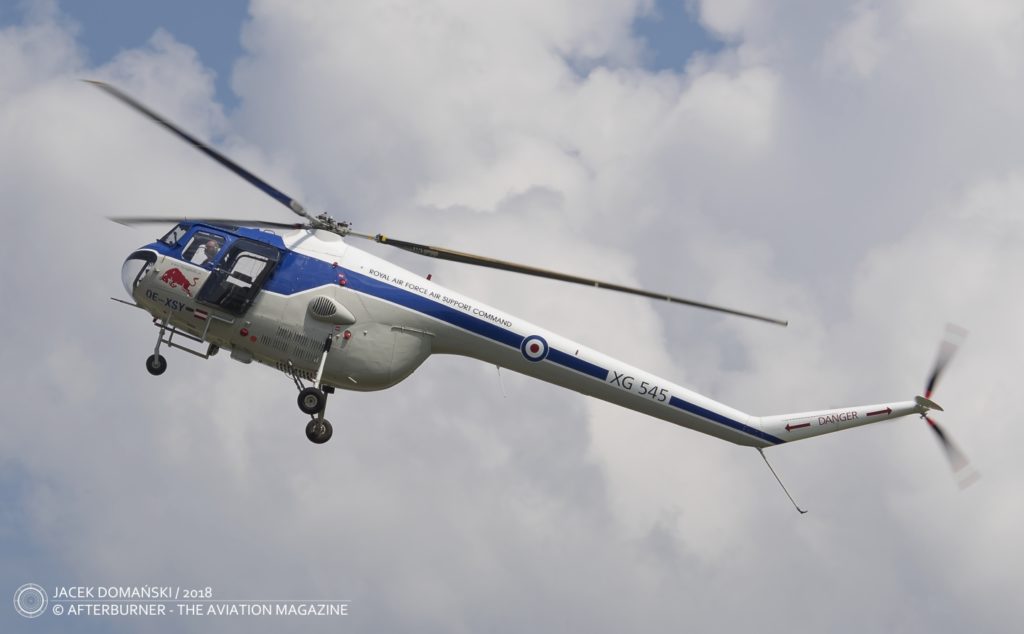 The flying displays programme included also the short presentation of the Czech Air Force with the Mi-24/35, Mi-171 and PZL W-3A ´Sokol´ helicopters. The aviation training centre (CLV) in Pardubice participated with their last Mil Mi-2, performing one of the last displays – regrettably, 2018 is the last year of this legendary aircraft service in CLV. At the static display the successor of Mi-2 in the training centre, Enstrom 480BG, could be spotted, and it was the first public presentation of that new CLV equipment. 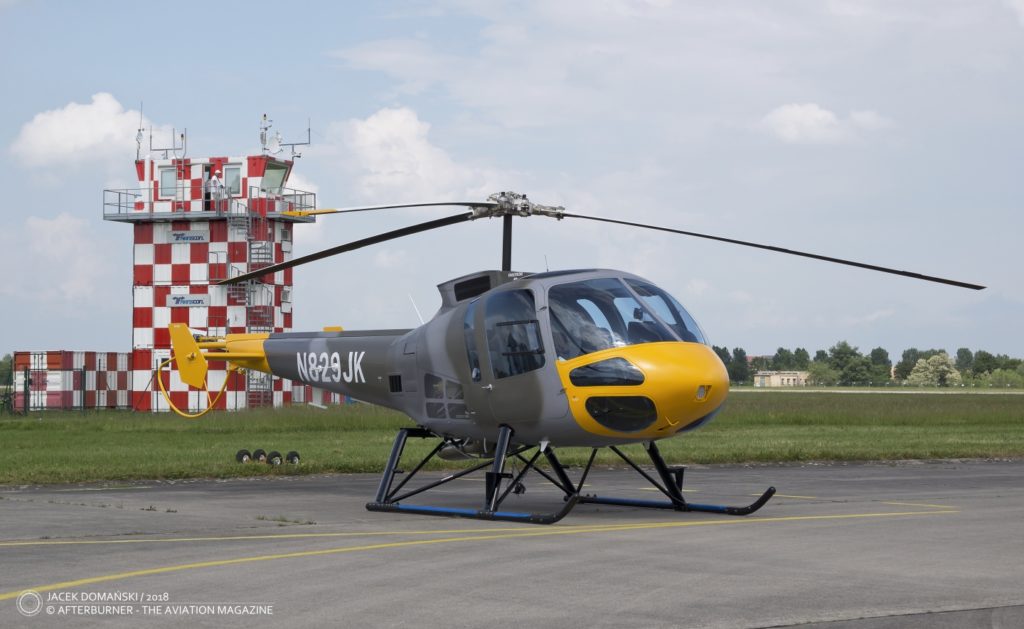 The flying display programme started in the afternoon and was traditionally opened by the formation flight of thirteen helicopters that performed not only the flypast over the runway but also a hover in formation. The following dynamic presentations of various rotary-wing aircraft included solo fights of Bell 427, MBB Bo 105 or Schweizer 300. 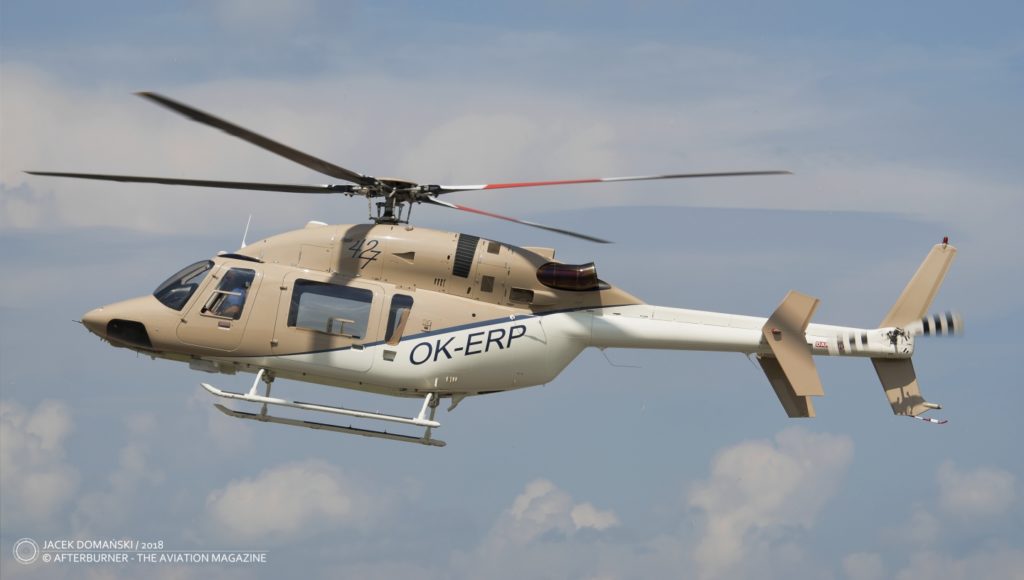 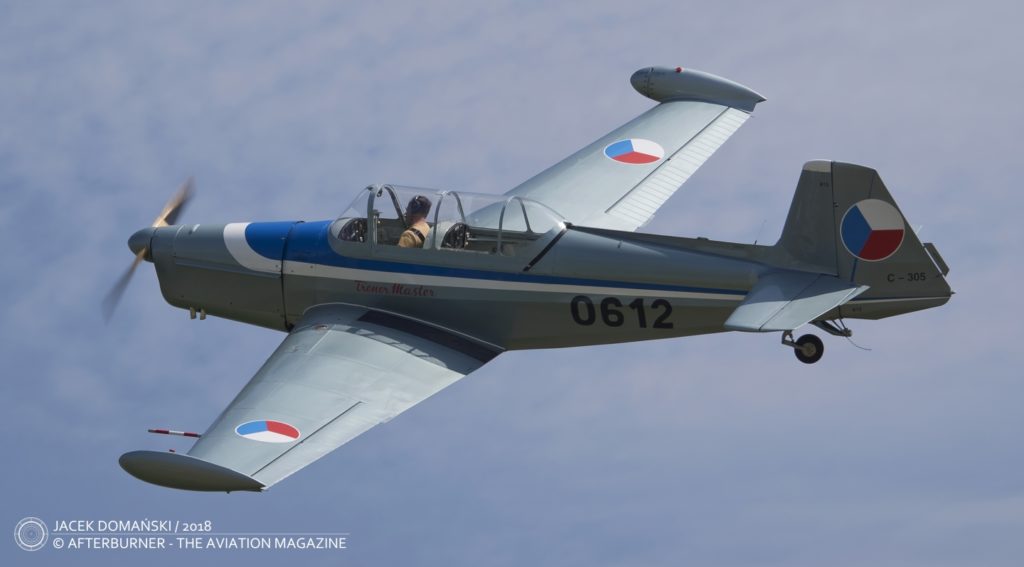 The star of the static display was the Westland Sea King Mk.41 from the German Navy Marinefliegergeschwader 5 (Nordholz). The helicopter crew offered the opportunity to see this aircraft from the inside and this possibility received a great deal of attention among the airshow visitors. Besides the Sea King, approximately 70 airplanes and helicopters could be seen at the static exhibition of the airshow. 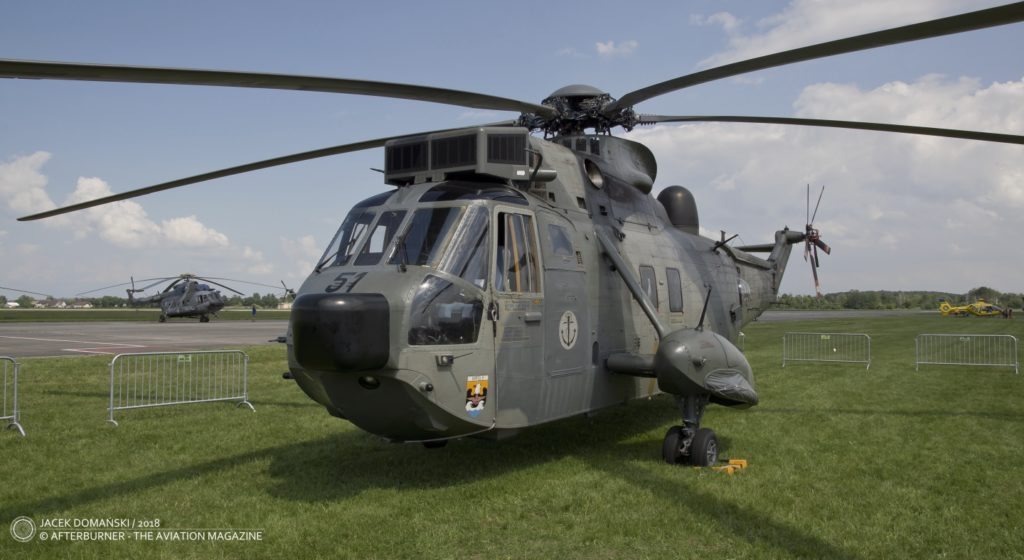 For the past few years the Helicopter Show is organized together with the Rally Show – the motorsport event arranged at the Czech Ring circuit, located next to the airfield. The visitors have the possibility to attend both shows using the same ticket, and the programme is scheduled in the way allowing them to participate in all main events of the day – the Rally Show starts in the morning and the flying programme of the Helicopter Show begins in the afternoon. 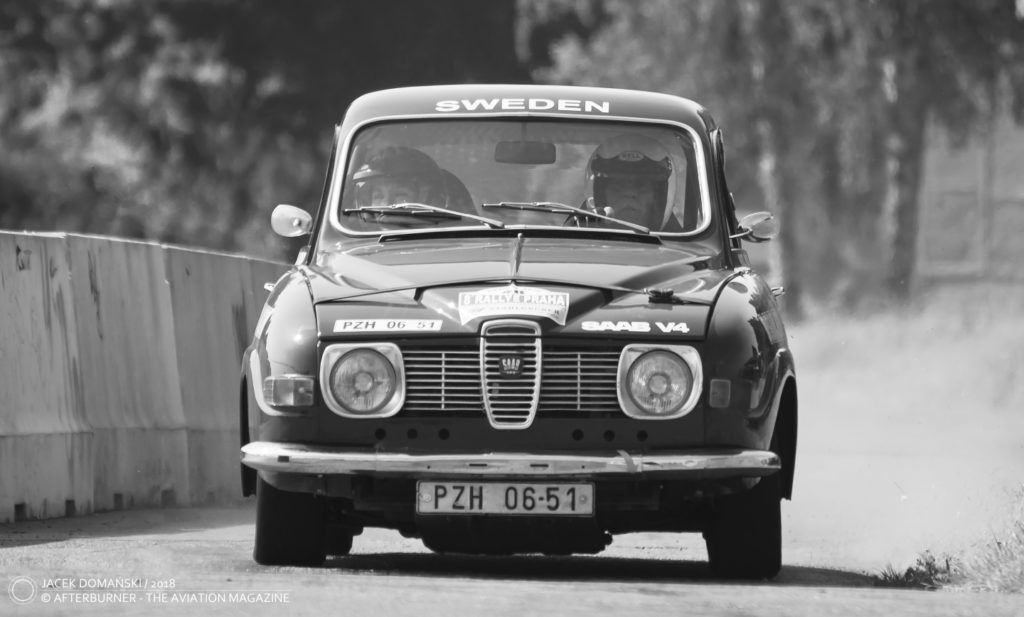 The power that the common organization of two adrenaline events creates should be harnessed and the organizers used this opportunity during the race display. A variety of vehicles met on the runway for the speed race –  helicopter (Eurocopter AS350), aerobatic special (Extra 330SC), the motorcycle plus two Ferrari cars: 458 Italia and F12 Berlinetta.

The hot and sunny weather and the attractive programme gathered almost 30,000 people at the Hradec Kralove airport. The Helicopter Show and Rally Show together are the interesting event, not only for the aviation fans, but also for the whole families with children of all ages. 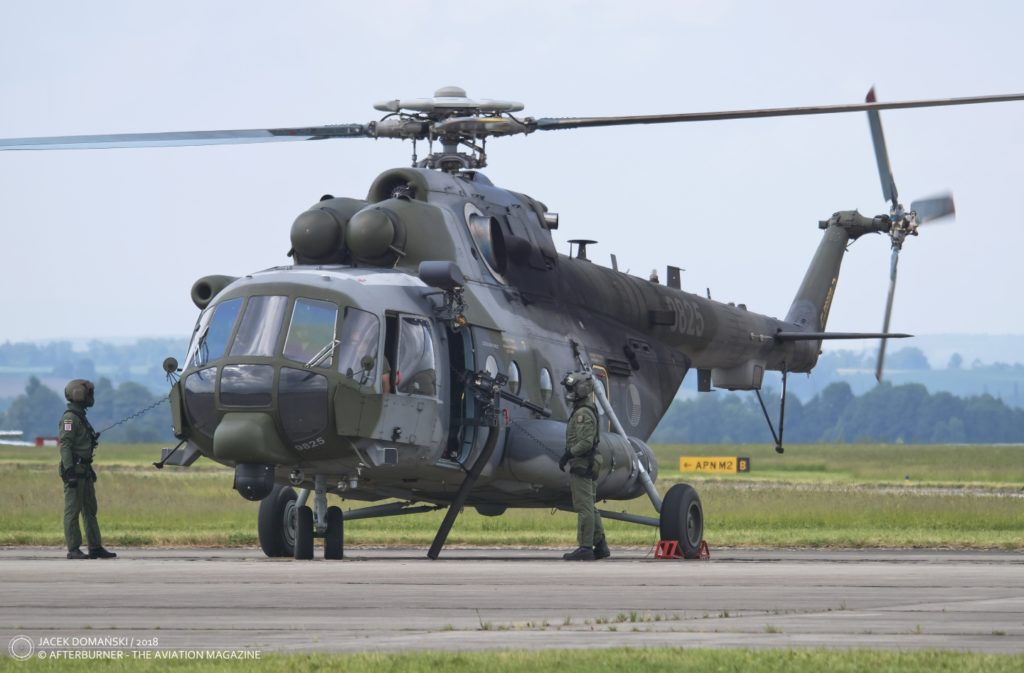 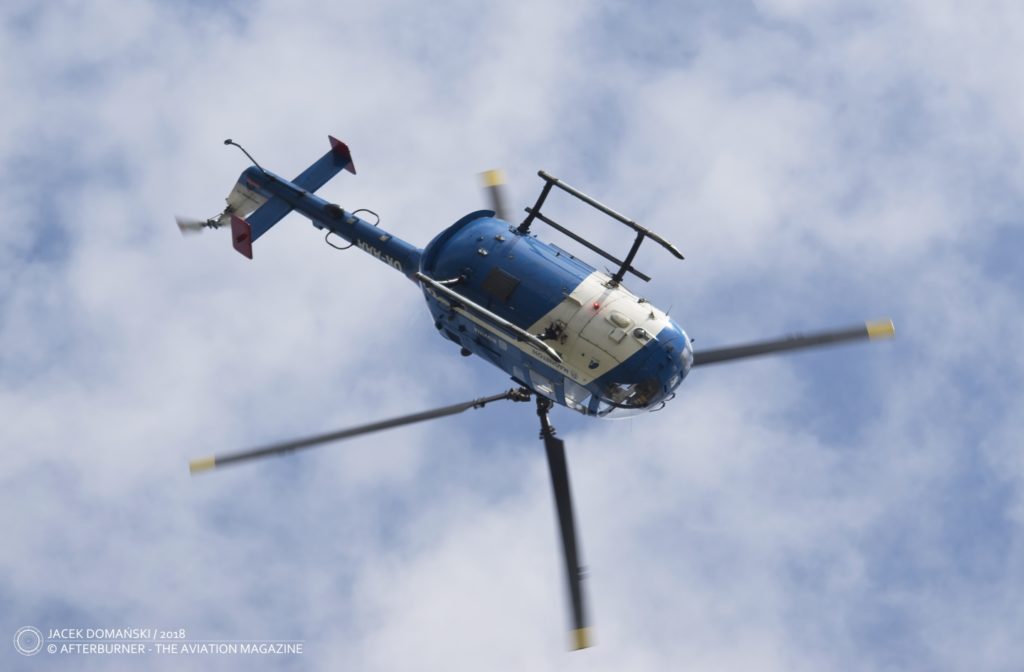