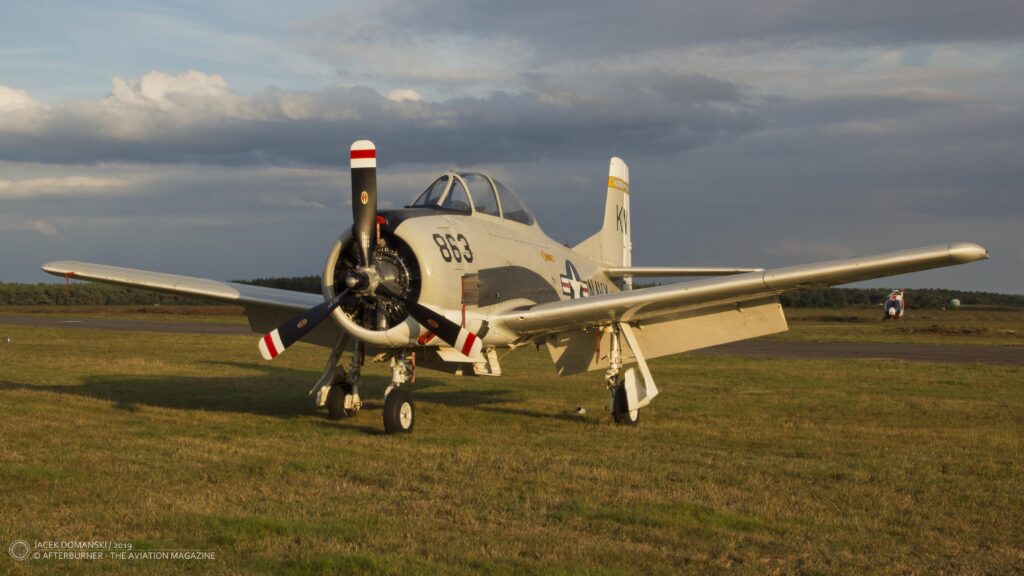 In the late 1930s and during the World War II years, North American T-6 Texan and its derivatives were the basic combat training aircraft for both USAAF, US Navy and the British Commonwealth air forces. However, in the middle of 1940s it became obvious that the T-6 had reached the end of its possible development, therefore creating the need for introducing a new, more modern design.

The US Navy was the first to evaluate two prototypes of a new training aircraft. They were Fairchild XNQ and North American XSN2J, that performed their maiden flights on 7th October 1946 and 15th February 1947, respectively. However, both the budget cuts and below-expectation performance of those prototypes caused the programme to be cancelled in 1948.

Nevertheless, the North American company did not abandon the development, reasonably expecting that sooner or later, the new trainer would be needed – by either US Navy or USAF. The new design, being an upgrade of the XSN2J, was designated XT-28 (NA-159) and made its first flight on 24th September 1949.

After only a few months, the USAF in fact issued its official request for a new combat trainer aircraft. In the middle of 1950, the prototype of XT-28 was sent to Eglin Air Base, Florida for evaluation and testing purposes. They were a complete success. The aeroplane, officially designated T-28 Trojan, was approved as the basic USAF trainer and soon the first delivery contract was signed.

There were almost 2,000 aircraft of that type built between 1950 and 1957. Apart from being a primary trainer of the USAF, the T-28 was also adopted by the US Navy and Marine Corps.

The first, basic variants of that aircraft initially included T-28A version for the air force (powered by Wright R-1300-1 radial engine), T-28B representing a land-based trainer for the navy (with Wright R-1820-86 engine) and T-28C equipped with shortened propeller blades and a tailhook for carrier-landing purposes.

Generally speaking, the T-28 was a successful design, complying with the requirements for a combat training aircraft of the 1950s. Nevertheless, rapid development of aviation and introduction of jet aeroplanes caused its design to be considered as obsolete by the USAF in a relatively short time. As a consequence, starting from the early 1960s, the air force T-28s were being progressively assigned to other, less demanding tasks, or just being retired.

The US Navy was not so demanding and the T-28 Trojan was still being used there as primary trainer until the middle of 1980s.

It must be mentioned here that, despite being designed as a trainer, a few combat variants of the T-28 Trojan were developed. They included T-28D Nomad, a counter-insurgency, SAR and reconnaissance aircraft used during the Vietnam War; AT-28D close support aeroplane or T-28S Fennec counter-insurgency aircraft for the French Air Force. Most of those combat versions were made as a conversion from trainers, done by Fairchild and Pacific Airmotive companies.

The T-28 Trojan has also been successful outside the United States. The aircraft was used by air force and naval aviation of at least 25 countries all over the world. Nowadays, the Trojans are one of the most popular privately owned warbirds and quite often can be spotted during air show events.

This is exactly the case of the aircraft pictured above, manufactured in 1954 for the US Navy and then sold to private owner in 1990. That Trojan was then registered as N377WW, the sign it carries until today. Over the next years, the aircraft has changed its owner a few times, receiving in 2010 its current KV-863 US Navy training livery from the era.

Since 2010, the T-28 Trojan N377WW is being based in Belgium and on regular basis can be seen at various European air show events.

Dear Aviation Enthusiast! After long months of preparations, we are pleased to put at your disposal the fruit of our actions – AFTERBURNER – The Aviation Magazine website. Site about aviation, created by enthusiasts for […]

Memorial Air Show is one of the oldest air show events in Czech Republic, organized every second year since 1991. The event takes place at the airfield in Roudnice nad Labem and is run by […]