A week ago, the aviation world was disturbed by an incident that occurred in the British Isles. By this, we mean the engine problems suffered by the Catalina flying boat called ‘Miss Pick Up’ while she was operating on the famous Loch Ness in Scotland, on Saturday, 17th October. Thanks to The Catalina Society and the Plane Sailing Air Displays Limited – an operator of the ‘Miss Pick Up’ – we are able to provide you more details about the case, the current situation of the aircraft and her nearest future.

However, at the beginning, and especially for those who are not familiar with this remarkable aircraft, we would like to bring you closer to a really interesting, 77-year-long history of the ´Miss Pick Up´.

The Catalina ‘Miss Pick Up’, currently registered as G-PBYA, precisely is a Canso A amphibian, being a Canadian equivalent to the US Navy PBY-5A. She was built in 1943 by the Canadian Vickers at Cartierville, Quebec, following an order of the Royal Canadian Air Force and receiving a constructor number CV-283 (RCAF serial number 11005).

After entering into service on 27th October 1943, the aircraft was assigned to the 9th (Bomber Reconnaissance) Squadron of the RCAF, which, at that time, was stationed at Bella Bella on the coast of British Columbia. Serving in that squadron from November 1943 to August 1944, the Catalina ´11005´ performed day and night patrols in search of enemy submarines. When the threat of Japanese invasion on Western Canada decreased, the 9th Squadron was disbanded and its base in Bella Bella was closed. Then, together with all the other Canso aeroplanes that served in the squadron, she was transferred to another air base – Alliford Bay, Queen Charlotte Islands in British Columbia. The Canso ´11005´ joined the 7th (Bomber Reconnaissance) Squadron of RCAF there. Although flying within the new unit, the main task of the flying boats remained the same – searching for enemy submarines.

The ´11005´ served in the 7th Squadron until 25th July 1945, the day when the unit was disbanded. After the war, the aeroplane went to Moose Jaw, where it was stored for another three years. Next, in 1948, she was converted to a freight aircraft and flew with the 413th Survey Squadron RCAF, based in Rockliffe, Ontario. During the Second World War, this unit operated Catalinas in North Atlantic and Indian Ocean areas, and in post-war years was changed into a Photo Reconnaissance unit, carrying out photo reconnaissance missions over the Arctic areas, search and rescue flights and flood relief supply operations. In April of 1949, the squadron was transformated into a transport unit but just for a short time as it was disbanded in 1950. 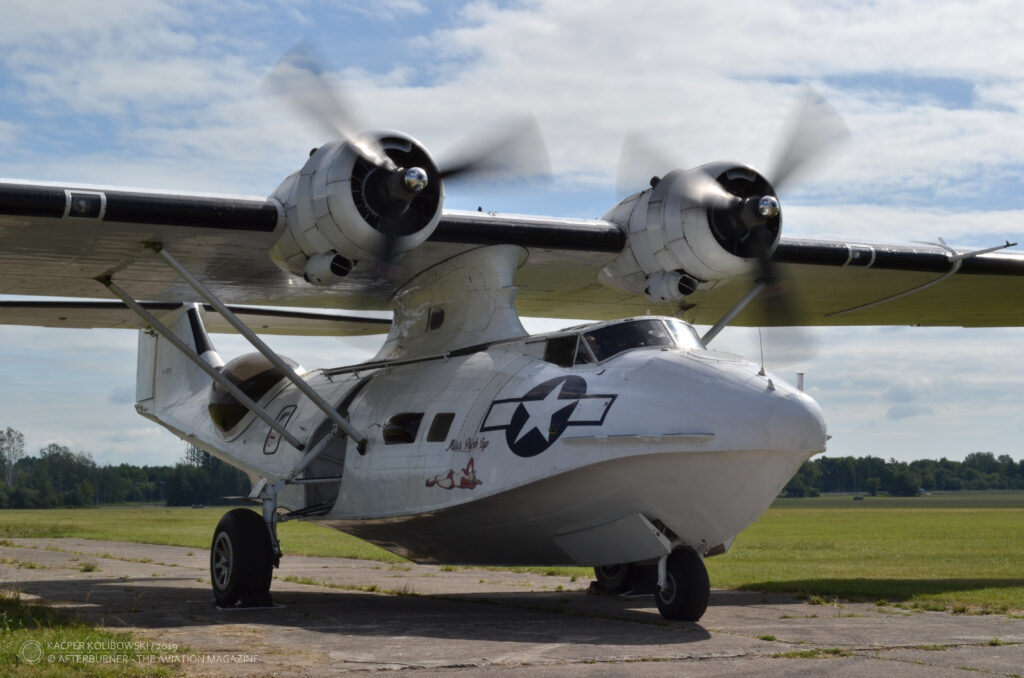 Then, the Canso ‘11005’ was assigned to the 121st Flight RCAF, being a SAR unit based at Sea Island, Vancouver – at that time, she carried a hull code QT-005. On 25th May 1961, the flying boat finished her military service and was stored at Vulcan, Alberta. Subsequently, the Crown Assets Disposal Corp disposed her to the commercial company, Frontier Air Transport, based in Calgary area. There, the ‘11005’ underwent a post-war conversion and her bow turret, as well as side blisters, were removed. The aircraft has begun its civilian career.

Some time later, the Field Aviation company installed internal water tanks on the aircraft, adapting her to the role of a firefighting aeroplane. Then, the Canso was taken on by the Kentings company and received the civil registration number CF-NJF. At that time, she was also chartered to Protection Civile – a French operator based in Marseille. There, partially painted in blue and flying under the call-sign of ´Pelican Bleu´ (blue pelican), she performed several firefighting missions from the mid to late 1960s.

In the first half of 1970s, the ‘11005’ was transferred to the firefighting company called Norcanair and based at Prince Albert, Saskatchewan. Her livery was changed again and a fleet number – a orange-painted ´14´ – was placed just below the cockpit.

In the late 1990s the Hicks & Lawrence company took over the ´11005´, together with another Canso previously operated by Norcanair, and had to convert them into passenger variant for carrying tourists in Zimbabwe. However, that never happened and both aeroplanes were put on sale soon after.

Catalina ´11005´ was purchased by Plane Sailing Air Displays and her conversion to passenger variant was finalized. Within that transformation, the internal water tanks and other fire-fighting equipment were removed, allowing the passenger seats to be mounted instead. Additionally, the side blisters were exchanged for one-piece smoked Perspex ones, giving the passengers a better panoramic view in the rear part of the hull. And finally, the hydraulic air-stairs were installed in the tail section of the aeroplane.

After a long time spent on repairs, modification and introductory flights, on 1st March 2004 the Canso C-FNJF took-off from Nanaimo, British Columbia, and began her long journey to the United Kingdom – through the USA, Canada and finally crossing the Atlantic Ocean. Although the first attempt to cross the Atlantic had to be cancelled due to unfavourable head-wind conditions, the second one was successful and ´11005´ landed in Shannon, Southern Ireland on 30th March. 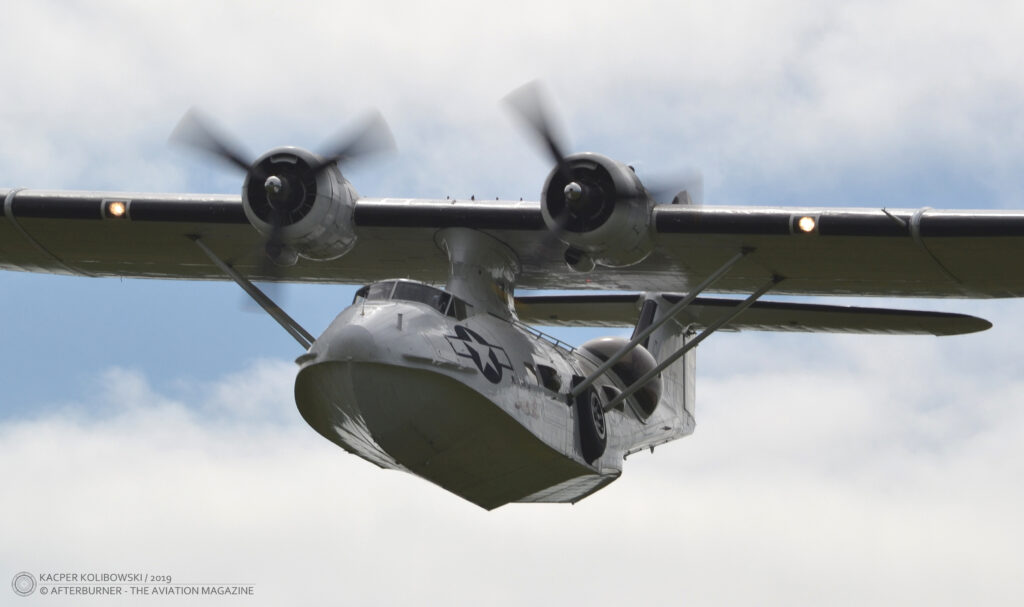 Almost immediately after arriving to England and her new home in Duxford, the flying boat started to participate in various aviation events and yet in 2004 she could be seen at many air shows. After closing of the season, the aircraft was overhauled and re-registered once again – this time the ´11005´ received the British G-PBYA sign, the one she uses until today.

In May 2005, the flying boat received a new livery, the one we know very well from many aviation events in Europe – it represents a wartime USAAF OA-10A Catalina (44-33915) of the 8th Air Force, 5th  Emergency Rescue Squadron, that based at Halesworth, Suffolk (UK).

The aircraft became to be officially recognized as the PBY-5A Catalina ‘Miss Pick Up’ and currently is the sole airworthy aeroplane of that type in Europe. Each year, at the pleasure of all aviation enthusiasts, she participates in many air shows, not only in the United Kingdom, but also all over Europe.

Regrettably, this year proved to be more than difficult for both aviation fans, aircraft operators and also the aeroplanes, particularly the historic ones. For such an aircraft, participation in aviation events usually means the main source of income, that keeps the aeroplane in airworthy condition. The ´Miss Pick Up´ is not an exception from this rule and, as with many other famous warbirds, the cancellation of most air shows of 2020 season meant a huge blow for her operator. Although she took part in a few events this year, this was really nothing comparing to the ordinary yearly schedule.

Flying for the film is another opportunity of securing funds for aeroplane operation and recently, just at the end of the current season, the ´Miss Pick Up´ was involved in production of two TV series – the first one for a US television, filmed at RAF Halton in Bucks, and the second on Scottish Loch Ness for a UK television programme. 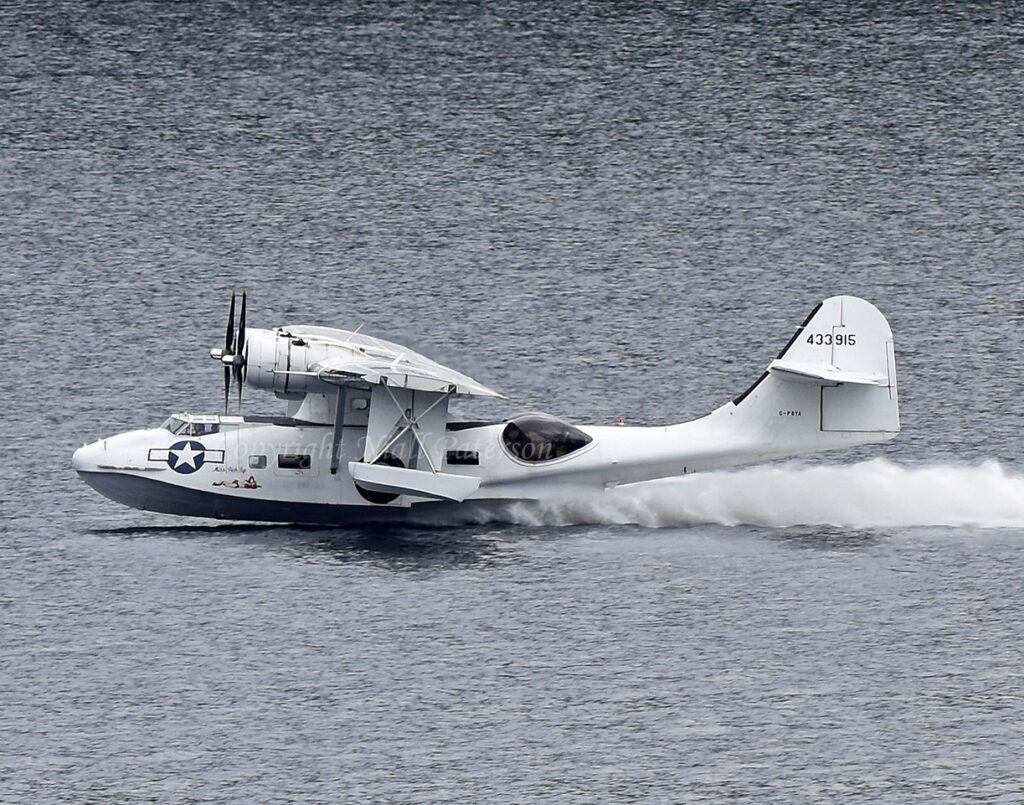 The ‘Miss Pick Up’ already proved to be a great actress and the filming crews were very satisfied with the final results. Unfortunately, the shooting day of 17th October, when the aeroplane was visiting the famous Loch Ness, turned out to be an unfortunate day for ´11005´.

At first, everything was going well, as the Catalina Society officially reported. After a series of landings, take-offs and flights over that famous Scottish lake, the aeroplane landed on the water once again so that the actors, according to the script of the series, got off the aircraft. Then the ‘Miss Pick Up’ taxied out from the shore and most of the filming crew got out of the aeroplane and moved to the boat that took them back to the shore. During the next start of the aircraft engines, the issue occurred. The Catalina’s port engine started up normally, but the starboard one, despite attempts, failed to turn on. Thus, the ‘Miss Pick Up’ and her crew got stuck in the middle of Loch Ness  drifting in a light wind.

Manoeuvring such a big flying boat on water with only one engine would be difficult. In addition, it would be hard to find a place suitable for a stopover of Catalina on the banks of Loch Ness. Finally, the Loch Ness Royal National Lifeboat Institution came to help ‘Miss Pick Up’ and her crew. One of the institution’s boats towed the Catalina to Urquhart Bay, where she could be safely berthed to a buoy  and then helped her crew and the remaining filming team member to safely reach the shore.

Initially, the ‘Miss Pick Up’ pilots supposed a failure of the port engine starter as a cause of the problem. Soon, the aircraft Chief Engineer arrived the site from Duxford to replace the mentioned part. Unfortunately, it turned out that this did not solve the issue and the engine still did not want to start. It became clear that the cause was somewhere else.

In order to analyse the problem more thoroughly, it was necessary to place the aeroplane on the mainland. Luckily, members of the company that operates the aircraft managed to find and hire a crane suitable for lifting up the flying boat weighing in almost ten tons. On Thursday, 22nd October, thanks to favourable weather conditions and with the help of the mentioned crane, it was possible to take the ‘Miss Pick Up’ from the waters of the Loch Ness and place her safely on a private quay. Now, the aircraft will securely wait there for the next stages of the recovery operation, that will be carried out within the next few weeks. 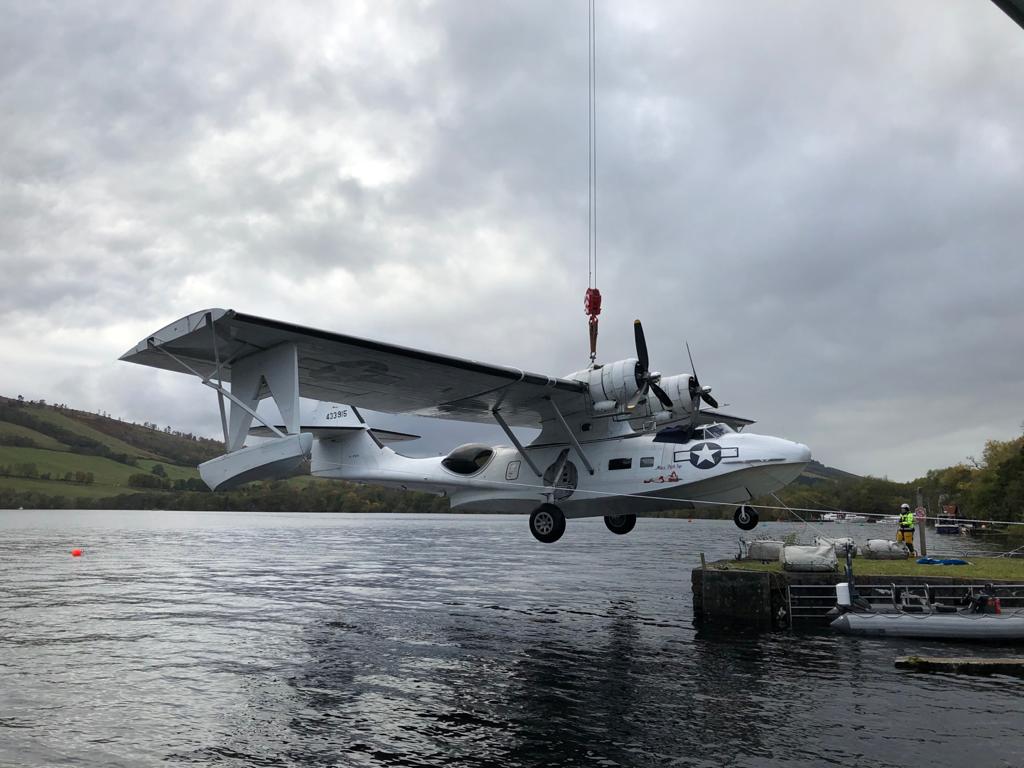 The first stage of the recovery operation on 22nd October. Photo: Richard McGuinness

The next step is to replace the current Pratt & Whitney R-1830 starboard engine with another, zero-time one, which is hopefully available to the operator of the aeroplane and that was to be installed on the aircraft during winter maintenance. One of the Catalina’s characteristic blisters was also damaged during the RNLI recovery, so in the meantime, attempts to temporarily repair it, will be made too. Only then the ‘Miss Pick Up’ will be able to fly to Inverness-Dalcross and then return to Duxford.

However, before that happens, there is still many days of planning and hard work in difficult, truly field conditions ahead of the team operating the aircraft. ‘Of all the challenges that have faced the operator Plane Sailing Air Displays Ltd in the many years it has flown Catalinas, this must rank as the biggest by far.‘ – stated David Legg from The Catalina Society.

The repair of the PBY-5A Catalina ‘Miss Pick Up’ and restoring it to flying condition will require a huge financial contribution. Therefore, the fundraising for this purpose has been launched. Every aviation enthusiast who is not indifferent to the fate of this wonderful flying boat and cannot wait to see her in the sky again can make a donation here – www.gofundme.com/f/misspickup