In the history of human conflicts, there were countless legends created. Stories about the brave soldiers, military and political leaders were passed down through the generations and nowadays they are told by the traditional and online media. The legendary weapons and military equipment have their place among such wartime stories, making some the iconic symbols of their times.

This is one of such stories, a tale from the recent history, introducing the most significant helicopter from the Royal Air Force Fleet, and probably the most iconic rotorcraft in the world – Boeing HC.4 Chinook, ZA718 ´Bravo November´. The helicopter known to be the sole survivor from the SS Atlantic Conveyor, the veteran of three armed conflicts wars and famous from four Distinguished Flying Cross awarded for its pilots. 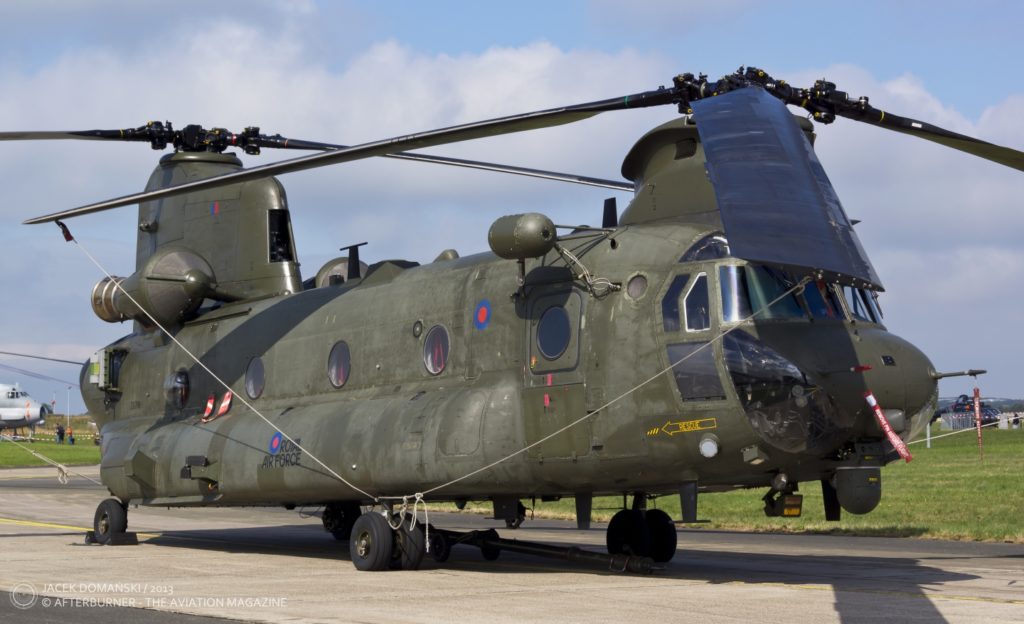 It all started in 1978, with the British order for 33 heavy-lift helicopters, designated as HC.1 (Heavy Cargo Mark 1) Chinook and based on Boeing CH-47C. This was already the third attempt to acquire the heavy transport rotorcraft for the Royal Air Force – previously, there were two orders for 15 Chinooks already placed, in 1967 and 1971, but both were also soon cancelled due to the budget cuts.

The first RAF Chinook squadron, No. 18, was formed in August 1981 at Odiham air base. The original CH-47 designation was never adopted by the RAF and the helicopters were recognized as HC Mk.1 (or HC.1). Soon afterwards, the new British transport helicopters were sent into action, far away from their home base – on 2nd April 1982 Argentina invaded and occupied the Falkland Islands, beginning the undeclared war that lasted 74 days.

As a part of Operation Corporate forces, SS Atlantic Conveyor, a requisitioned British merchant vessel, left the United Kingdom and set sail for Ascension Island and then the Falklands Islands. Among her cargo, Atlantic Conveyor was carrying eleven helicopters wrapped in plastic protection bags: five HC.1s from No. 18 Squadron (four for Falklands and one for Ascension) and six Wessex rotorcrafts from 848 Naval Air Squadron. 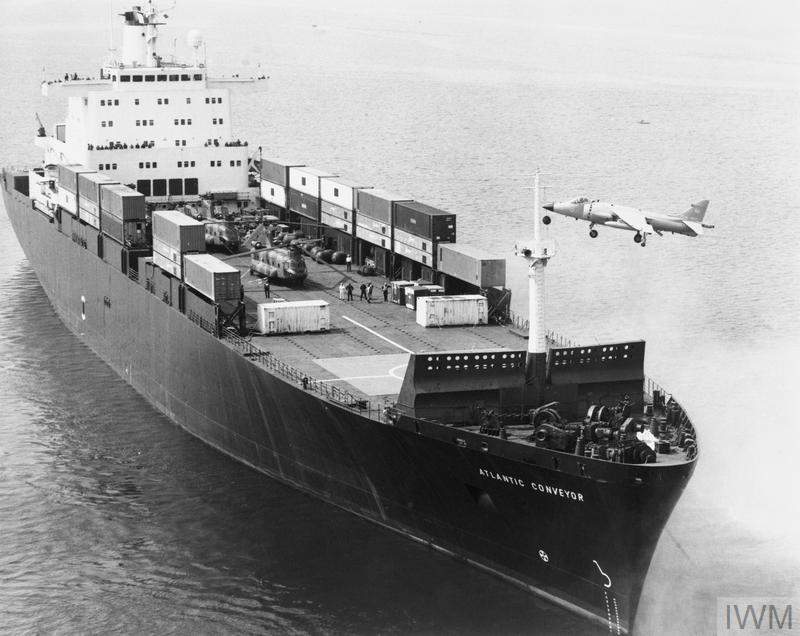 A Sea Harrier approaches Atlantic Conveyor to test its recently installed flight deck, being the first Sea Harrier to land on the merchant ship. Two RAF Chinooks have already landed and are parked on the flight deck. / © Crown copyright. IWM (FKD 532)

SS Atlantic Conveyor arrived off Falklands in mid-May and while waiting for sailing into Port San Carlos, she was already partially off-loading her aviation cargo. Fourteen Harrier aircraft were transferred to HMS Hermes and HMS Invincible, while the remaining helicopters were prepared for service – the plastic protection was removed, rotor blades mounted, and the first test flights began. In addition, one Lynx helicopter from HMS Hermes was flown to Atlantic Conveyor on 20th May.

On 25th May, ZA718, as one of the two HC.1s already in ready-to-flight condition, took-off for the test flight and headed east to pick up some cargo from HMS Glasgow. Shortly thereafter, Atlantic Conveyor was hit by two AM39 Exocet anti-ship missiles and caught fire. 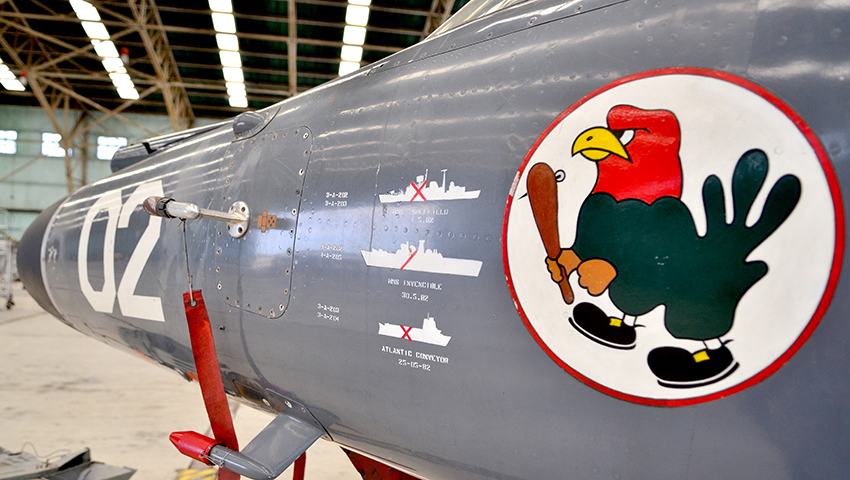 A nose of Argentine Super Etendard strike-fighter, with 2da Escuadrilla coat of arms and the silhouettes of the British ships hit by Exocet missiles during the Falkland War (as claimed by the Argentine Navy) / © Armada Argentina

Immediately the rescue started, and survivors were picked up by Royal Navy Sea King helicopters (one of them and the first reaching the survivors was piloted by Prince Andrew, the Duke of York), however 12 men died when Atlantic Conveyor was hit, including her master, Captain Ian North. Due to the fire and explosions caused by the ammunition and fuel carried by the British ship, there were no possibility to save the remaining helicopters and other load from the burning ship. Finally, Atlantic Conveyor sunk on 28th May, while being towed off Falklands – being the first wartime lost for the British merchant navy since the World War II.

The only helicopter that escaped the attack was ZA718 ´Bravo November´, the transport rotorcraft, piloted by Flight Lieutenant John Kennedy, managed to reach HMS Hermes and safely landed onboard. That stroke of luck was widely reported by British media, and soon Chinook ZA718 received its nickname: ´The Survivor´.

As all other heavy-lift helicopters were destroyed, ZA718 became the only transport helicopter for British troops at Falklands for several weeks. It seems almost impossible, but the flying and ground crews from No. 18 Squadron managed to keep ´Bravo November´ operational during all that time, working without any spare parts, lubricants, manuals and even specialized tools – all the maintenance and support equipment was lost with Atlantic Conveyor. Despite such difficulties, ZA718 ´BN´ is reported to carry more than 1,500 soldiers, 95 casualties, 650 POWs and 550 tons of cargo, until the end of the Falkland War. 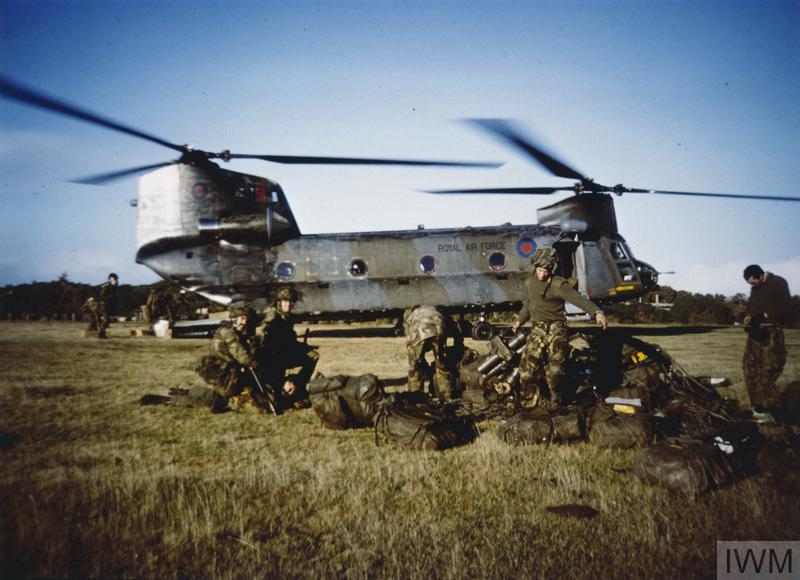 And this was exactly that hard time during the Falkland War, when the first Distinguished Flying Cross was awarded to ´Bravo November´ pilot, Squadron Leader Richard ‘Dick’ Langworthy. During the dangerous night flight over San Carlos Water bay, in a heavy snowstorm and in the zero-visibility conditions, the ZA718 hit the water surface while still flying at approximately 175 kph, due the malfunctioned altimeter. Despite the several damages caused by the impact, Langworthy managed to get the helicopter back in the air and returned to the airfield.

Chinook ZA718 returned to the United Kingdom and served there until 1993, when the first significant upgrade of the RAF Chinooks was performed. A year later, ´Bravo November´ became the first Chinook converted to the new version – HC.2, being an equivalent of CH-47D. The orders for more heavy-lift helicopters continued – additional three HC.2 were initially ordered, then six upgraded HC Mk.2A were added and finally in 1995 eight HC Mk.3 were also ordered (the latter being intended for the special operation forces and being the low-cost equivalent of US MH-47E). 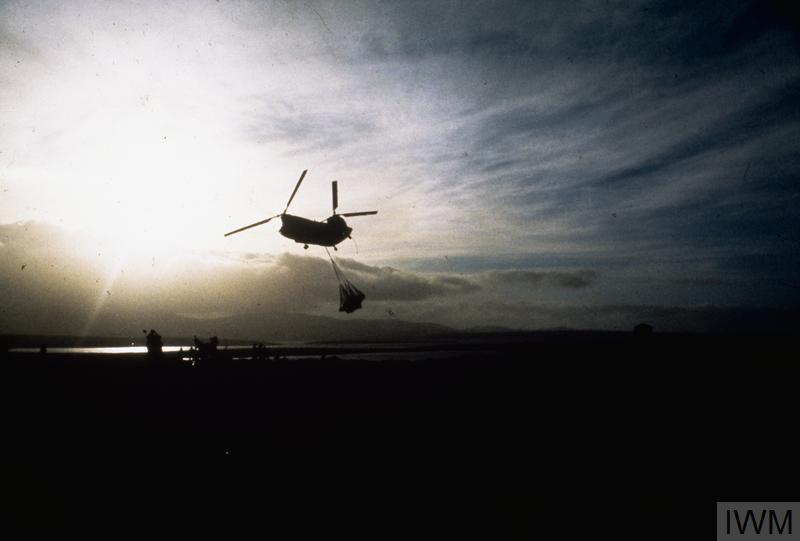 The 2003 invasion of Iraq started the new military conflict at the Middle East, and the British were among the US-led coalition armed forces. And the No. 18 Squadron was there too, including the Chinook ZA718, that just began its second war duty.

´Operation Telic´, as the British military operations in Iraq were named, started with the assault on al-Faw Peninsula and the oil facility there, performed by the Royal Marine Commandos. The troops were carried to the peninsula by five British Chinooks, with ´Bravo November´ among them. The heavy transport helicopters supported the Royal Marines during five long days, each of them flying 19 hours per day on the average. This was exactly when the second DFC was awarded to ZA718 pilot – Squadron Leader Nick Carr received the cross for the exceptional leadership and support during this operation.

The next British large-scaled military operation was codenamed Herrick and was a part of the Operation Enduring Freedom, a counterterrorism operation initiated by the US government in Afghanistan. ´Bravo November´ arrived there in 2006 and this was already the third military conflict for ZA718, the conflict that brought another two DFC for its pilots.

Flight Lieutenant Craig Wilson was the third one. He was awarded DFC for the brave rescue mission in Helmand Province – being on duty for over 22 hours, he volunteered to deliver reinforcement and recover the wounded from the remote post being under fire.

ZA718 at Fliegerhorst Nordholz, Germany – visiting this air base at the 100th Anniversary of the German Naval Aviation, 2013

The fourth DFC came in 2010. Flight Lieutenant Ian Fortune and his crew were performing the casevac mission for US Marines and Afghan National Army when ´Bravo November´ got under the heavy machine gun fire. The helicopter was hit several times, one of the bullets hit Fortune´s night goggles that cut the pilot´s face. Despite all those circumstances, he managed to board the troops and returned to base.

The war in Afghanistan was the reason for another significant upgrade of the RAF Chinook fleet. The 650 million USD worth programme called Project Julius was announced in 2009 and covered all 38 remaining helicopters. All HC.2 received the glass cockpit, more powerful engines, a FLIR detector and were re-designated as HC.4.

Project Julius upgrades included also the eight Mk.3 Chinooks, that were stored since their delivery in 1990s. Those helicopters were supposed to be custom made for the special forces, however due to a procurement failure their avionics did not meet the British military airworthiness standards. Now, as a part of the Julius programme, they were upgraded to the same standard as HC.4 and received the new designation HC Mk.5.

Also in 2009, another 14 new Chinooks were ordered, with the last received in December 2015. Those helicopters were designated as Mk.6 and, among many other upgrades, included the Boeing Digital Advanced Flight Control Systems (DAFCS). It proved to be so efficient, that all HC.4 helicopters are planned to be equipped with DAFCS in the near future. 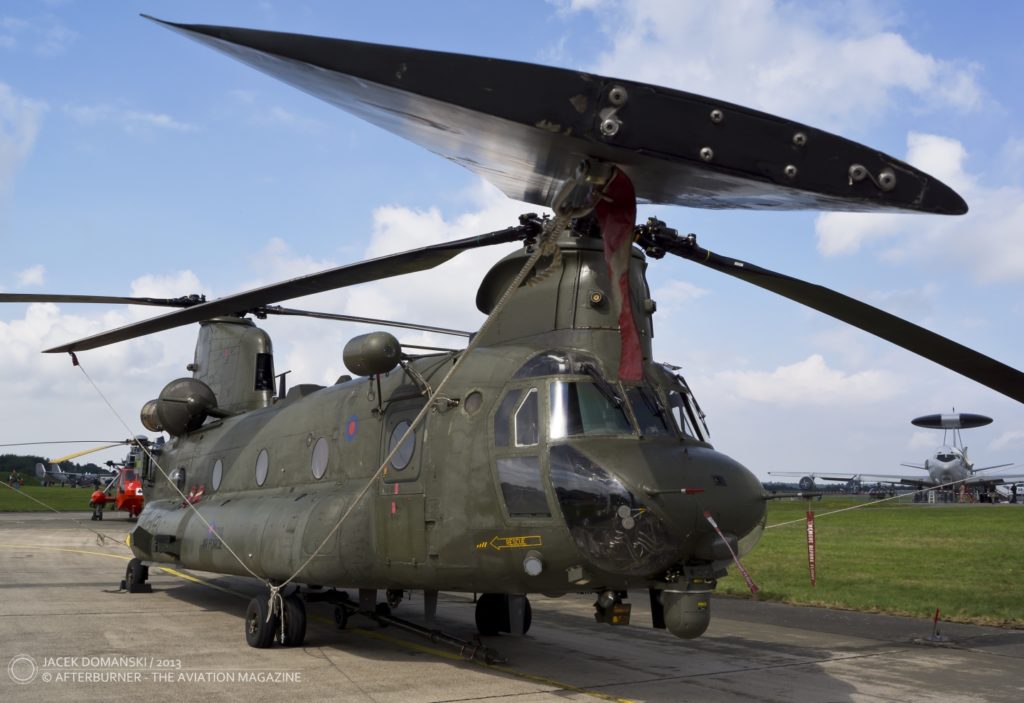 Today, the RAF is the second largest military operator of Chinook heavy-lift helicopter, the current inventory includes 60 rotorcrafts from 4 squadrons, based in Odiham and Benson. Another order for 16 more Chinooks is expected to be placed in the next years.

ZA718 is still a part of the RAF fleet, being in active service for 38 long years and remaining one of the few first Chinooks originally delivered in 1981. It is rumoured, however, that ´Bravo November´ duty time is coming to an end and many aviation enthusiast believe that this helicopter would find its final resting place in one of the British museums – with RAF Hendon and IWM at Duxford being mentioned the most. An exhibition related to ZA718 is already existing in Hendon, with the forward fuselage of US CH-47 re-painted for ´Bravo November.

But for right now, ZA718 BN returned to the place that made it famous – a few months ago ´Bravo November´ was reported to be seen at the Falkland Islands, performing the everyday Chinook duties. 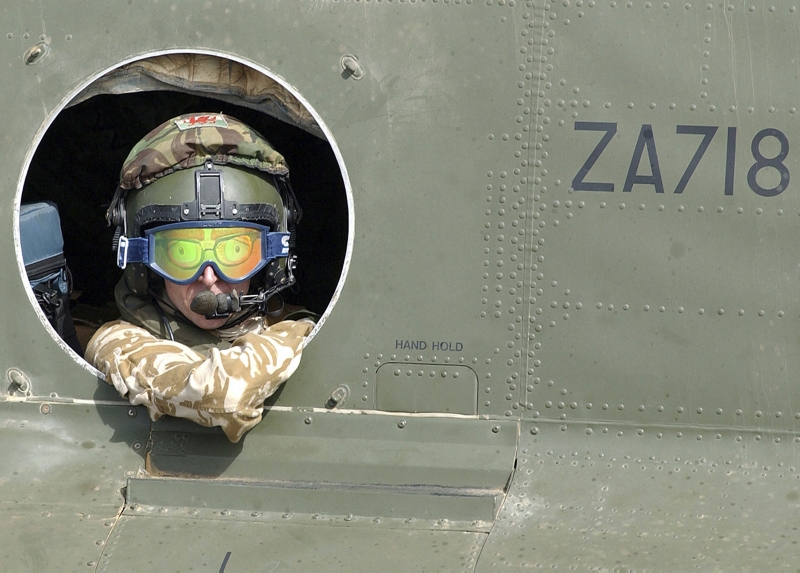 An RAF aircrewman from 18 Squadron, waits to take off for Iraq in a Chinook aircraft from the flightdeck of HMS Ark Royal / © Crown Copyright

Sources: Boeing and the RAF press releases, Armada Argentina press materials, ´The Battle for the Falklands´ by Hastings/Jenkins, ´Operation Corporate´ by M.Middlebrook