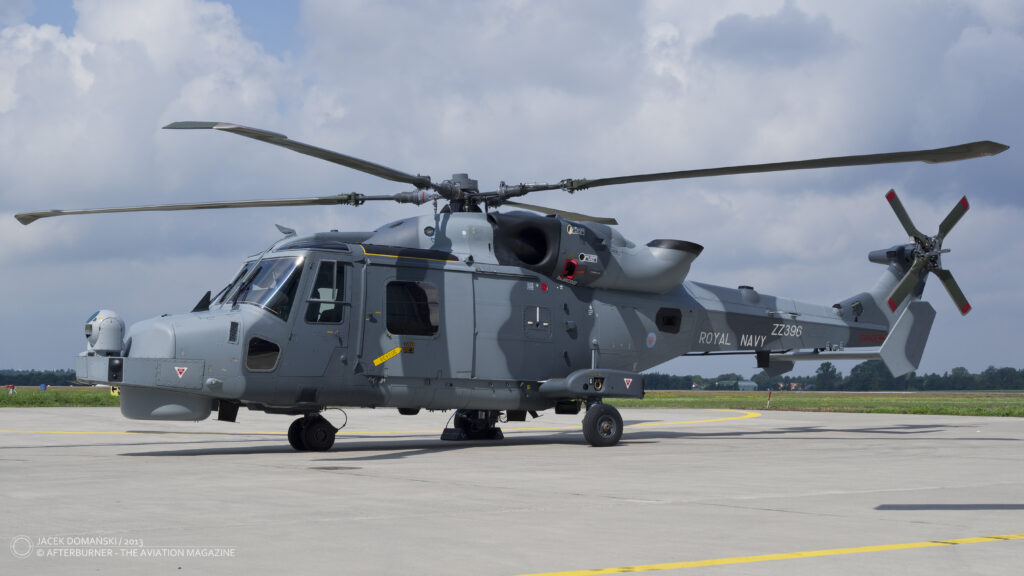 Westland Lynx multipurpose military rotorcraft – and a predecessor of Wildcat – for many years was one of the pillars of the British military helicopter fleet. It was introduced in 1977 as utility aircraft that, within following years of service, was successively developed into approximately 40 specialised variants, including anti-tank, anti-submarine warfare and SAR versions.

In the mid-1980s, together with introduction of the newest Super Lynx variant (recognized within the Royal Navy as Lynx HMA.8), it seemed that the original concept of this rotorcraft was fully exploited with no possibility for further upgrades. Especially because there was a new helicopter in sight, being a result of Anglo-Italian cooperation. Initially known as EH101 (later AW101 or more commonly as Merlin), the new rotorcraft was expected to replace Westland Sea King in all its roles within the Royal Navy and the Royal Air Force service.

Moreover, the British military authorities were aiming for unification of their helicopter fleet, exactly by introduction of the multirole Merlin rotorcraft. Notwithstanding such complications, Westland (and later AgustaWestland) had yet proposed two new upgrades of basic Lynx helicopter, designated as Super Lynx 200 and Super Lynx 300. However, none of them did resonate with the Royal Navy future needs, even despite the fact that the latter had its cockpit and avionics fully integrated with the EH101.

At the beginning of 2000s, the Royal Navy and the British Army both announced their requirements concerning a future combat helicopter, named Surface Combatant Maritime Rotorcraft (SCMR) and Battlefield Light Utility Helicopter (BLUH), respectively. In order to meet those expectations, AgustaWestland responded with a proposal for further upgrade of Super Lynx 300, within a programme called the Future Lynx.

Works on the new helicopter were launched in 2002, upon request from the British Ministry of Defence. It was expected that the Army variant would be ready to enter service in 2007, and the Navy version should be introduced one year later. The future helicopter was supposed to combine the best features of all three rotorcraft – the Super Lynx 300, AH.7 version used in the Army and the HMA.8 of the Navy. A possibility of conversion of the existing Lynx fleet to the Future Lynx standard had to be included as well.

Nevertheless, those assumptions were challenged yet in 2004, as a result of audit performed by the National Audit Office. It was pointed that further upgrading of existing Lynx helicopters was not economical, proposed changes in the British military rotorcraft fleet were impossible to achieve and, last but not least, BLUH programme was concluded as unaffordable. The auditors also recommended to evaluate offers from other aviation manufacturers and select the new helicopter through an open and competitive tendering procedure.

Regardless of the consequences, the MoD went the other way and still continued with its support to the Future Lynx programme. The BLUH project was shortly replaced by Battlefield Reconnaissance Helicopter (BRH) concept and in the middle of 2006, AgustaWestland received a direct order for 70 helicopters (although reduced by 10% shortly thereafter), worth 1 billion GBP. The dates when new rotorcraft should enter operational service were postponed to 2014 for the BRH version and to 2015 for the naval variant, respectively.

In April of 2009, AgustaWestland has announced that the new helicopter is going to be officially designated as AW159 and marketed as Wildcat. On 12th November of the same year, the first prototype of AW159 Wildcat performed its maiden flight. Two other prototypes of new British helicopter were completed within a year. All of them have been intensively tested in operational reality by the Royal Navy and the Army Air Corps.

The first serial-manufactured AW159 was delivered in May of 2012. It was a multirole variant of the new helicopter, initially intended for the British Army and designated as Wildcat AH. The naval version of AW159, known as Wildcat HMA2, followed at the end of next year. In 2014, the AgustaWestland AW159 Wildcat was officially reported as fully operational.

The AgustaWestland AW159 helicopter was also acquired by the Philippine Navy (Mk.220) and the Republic of Korea Navy (Mk.210). The Wildcat was also offered for the German Navy, as a possible replacement of Lynx Mk.88, however NH90 Sea Tiger was finally chosen as a new generation rotorcraft for Marineflieger.