In the recent time at an air shows in Poland is possible to see more and more vintage aeroplanes. Among them there are not only those which are visiting our country hospitably, but what is even more important – also those usually flying at the Polish sky. They are, among the others, CSS-13, TS-8 Bies, RWD-5R, DeHavilland Tiger Moth, DHC-1 Chipmunk, Auster Mk. IV, a pair of T-6 Harvards, Boeing Stearman and Yak-3M.

In the beginning of 2018 a next historic, unique aeroplane was brought over to our country – the  Yak-3U R2000 “Czech Ride”. The aircraft has immediately made a great interest of Polish aviation enthusiasts. The owners and pilots of this aeroplane are Mateusz Strama (until recently the co-owner and the pilot of above mentioned Stearman) and Piotr Kowalski. Both daily are seating themselves behind the controls of Boeing 737s. 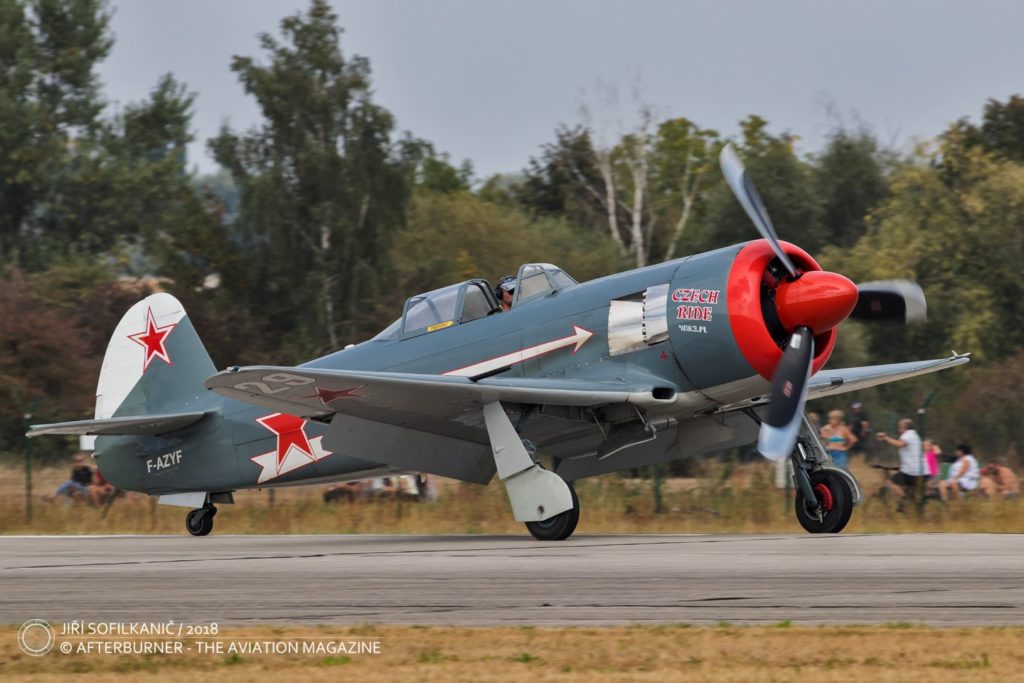 In the following interview, they are telling us about the history of the Yak-3U R2000 “Czech Ride”, about the process of bringing the aeroplane to our country and how does it feel to fly this most powerful and the fastest piston engine powered aircraft in Poland.

Afterburner: Why the Yak?

Mateusz Strama: I have always liked Yak-11s. They are fast, have excellent performance, great appearance and many Polish pilots flew them. It was a basic aircraft of the advanced training in Polish Air Force since 1949. The equivalent of Harvard in the West.

Piotr Kowalski: We fell in love with this aeroplane from the beginning. Earlier we saw a Yak-11 with the original engine. After all, that idea failed from various reasons. In fact, what have decided in that case was… a coincidence, our love for aviation and fascination for our Yak.

From where you brought this aircraft to Poland and how did the whole process look like? Did the aeroplane arrive to us on its own wings? Where is it being stationed usually?

Mateusz Strama: We were close to purchase the Yak-11 in the original version. However, problems in communication with the owner caused, that we had started looking around for something else. We found the “Czech Ride”, we met with the owner and after many months of negotiations as well as getting to know the aeroplane we bought it. We have flown our Yak from the Les Mureaux airfield, near Paris, in April last year. At the cruise speed over 400 km/h, such flight lasts about 3,5 hours. Our base is the Modlin Airport. Thanks to the favour of the AMC company, we have got the excellent conditions for hangar and maintenance.

In what year the aeroplane was produced in and what is its history? Where did it fly, before finding its way to our country?

Mateusz Strama: Our Yak was produced in the former Czechoslovakia as LET C-11 in 1956. Then it flew in the Egyptian Air Force. In the 90’s one collector of vintage aircrafts from France purchased from authorities of Egypt a several dozens of aeroplane fuselages. The majority of rebuilt Yak-3s or 11s comes exactly from this group. The “Czech Ride” Yak was restored in the USA by the famous aerobatic pilot Dan McCue. He put into the restoration 12 000 working hours for the repair. The aeroplane returned to the configuration of prototype Yak-3U, based on which Yak-11 was designed. 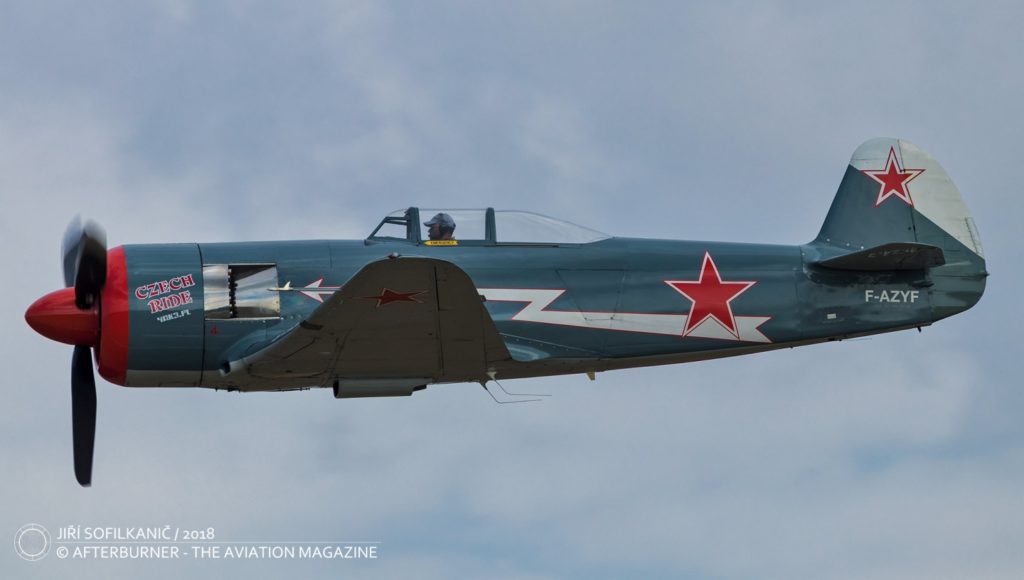 Mateusz Strama: In the end of the World War II a Yak-3 with 1800 horsepower ASh-82 engine was designed. It had to be a fighter aeroplane, faster than Yak-3 with the inline Klimov engine. Yak-3U had an increased wingspan and a reinforced structure. After the war, the Yak-11 training aircraft was constructed, based on the Yak-3U design, with the ASh-21 engine having the power of 700 HP. Our Yak is more like 3U, than to 11, therefore we acknowledged that we will be describing it as Yak-3U R2000. Such a name it also has in documentation of the restoration in the USA.

The aeroplane participated in air races in the USA. Therefore, it was a little bit modified. First and foremost, the engine was changed. Could you say something more about it? Was the engine subjected to some alterations for the purpose of air racing?

Mateusz Strama: The engine is Pratt & Whitney R2000 Twin Wasp with the power of 1450 horsepower, derived from Douglas DC-4. It is a very powerful power unit for this airframe. In Reno the “Czech Ride” reached the average speed of circa 350 miles per hour.

Is engine the only change made in this aircraft or something more was changed?

Mateusz Strama: Apart from the engine also the propeller was replaced for one coming – as well as the engine – from DC-4. The pneumatics was exchanged for hydraulic system, brakes for disc ones, western avionics was added, the canopy was replaced for the one from a single-seat version and a retracting tail wheel was added. Also, a smoke generating system was installed.

Does this aeroplane have some successes, or broke some records?

Mateusz Strama: The “Czech Ride” won the “Best Warbird” award at Oshkosh air show in 1990 and took the 3rd place in Reno Air Race in 1999.

How it is to fly this most powerful and the fastest piston engine powered aeroplane in Poland?

Mateusz Strama: This aircraft is the most powerful in Poland, that’s true. Regarding the maximum speed – the Yak-3 being stationed in Bemowo is achieving similar values. The impressions from flying such an aeroplane are hard to describe. It is reaching the speed up to 500 km per hour without any problems and the maximum speed is 640 km per hour. Moreover, it is very manoeuvrable and stable in every phase of the flight. It is like a dream come true for the pilot. Every minute of flight is a great experience and a great privilege.

Piotr Kowalski: How does it fly? 30 minutes replaces a few hours on C206 or Beech Baron, but in fact it’s not possible to compare it. We both had different experience before we pushed the lever ahead in our Yak. Mateusz much flew a Stearman, flew a Harvard, trained on it in the USA, flew a Husky quite a lot, towed gliders in Nowy Targ. I had a chance to fly a few hundred hours on an   An-2, plus a bit on Maul and Cub owned by my cousin, Marek Masalski (he showed me a lot during training me on the Cub – thanks Marek!). Unforgettable, of course, were the hours of flights on Stearman, thanks to Mateusz’s courtesy. I will never forget the return from air show in Krosno. It was a lovely flight.

The fun begins after taking place in the cabin. First impression – one can see nothing here; the engine is clouding everything. Take-off? It is possible to do it in many ways. There is no need of using the full power. From a long runway it is possible to take-off with a much smaller power than from a short one. This aeroplane doesn’t like big angles of the attack and is slowly gathering speed with them, it is then “soft on controls” and doesn’t want to fly. After take-off, retracting the gear and adjusting parameters it is a dream for the pilot. During a passage you can steer with legs and two fingers, it is incredibly sensitive. In low pass, above 250 KIAS, you feel that it is a heavy and fast machine. Without a problem it is possible to „close” the variometer after pulling the stick after low pass (and we have the variometer scaled “only” up to 6000 feet per minute).

Passages ~ 300 KIAS are giving the great impression. The aircraft is slowing down very slowly, a big radial engine doesn’t like low power and frequent and rapid changes of the power. To land we are approaching 120 miles per hour, after touchdown it is necessary to mind the direction, because the aircraft very quickly and easily slips by out of it. Recently we learnt from one of leading „warbird” pilots in Europe, that according to him, Yak is an aeroplane requires the fewest powers on controls during flying. This man also flew our “Czech Ride”.

Without doubt the aeroplane is unique. How does the matter of its operation look like? Is there a problem, for example, with the spare parts?

Mateusz Strama: Most of the spare parts is available in the USA, there are still quite a lot of engines of Twin Wasp series there. As for parts for the airframe we have a few friendly places, where we can get them. I don’t deny that flying the fighter aircraft from the 50’s is very expensive and time-consuming.

The last year’s flying season was the first, safe to say – premiere season for the Yak-3U R2000 in the Polish sky. Considering this fact, what do you think about that? Which from the last year’s displays you find as the best?

Mateusz Strama: The season was excellent; we flew on the majority of displays in Poland and we also had a few invitations to the Czech Republic and Slovakia. The aeroplane performed very well, never disappointed us. This year many events were at a high level. We liked the Aerobaltic in Gdynia, and the show in Świdnik very much.

Last year it was possible to see this aeroplane not only in solo displays, but in several cases, also in a pair with Artur Kielak and his XA-41. How has it come to that you’ve decided to perform the displays together?  What in case of flying in a close formation with an acrobatic aircraft was the most difficult?

Mateusz Strama: With Artur we know ourselves for a few years and he hit on the idea of the conjoint display. The hardest is to match the speed of both aeroplanes. For us 170 knots are slow, but for XA-41 it is the maximum speed of horizontal flight.

Will we be able to see both aeroplanes in pair also this year?

Mateusz Strama: I hope that yes. We are planning to diversify the display, make it more interesting by adding additional elements. We also want to perform solo displays which are better showing the capabilities of this machine. 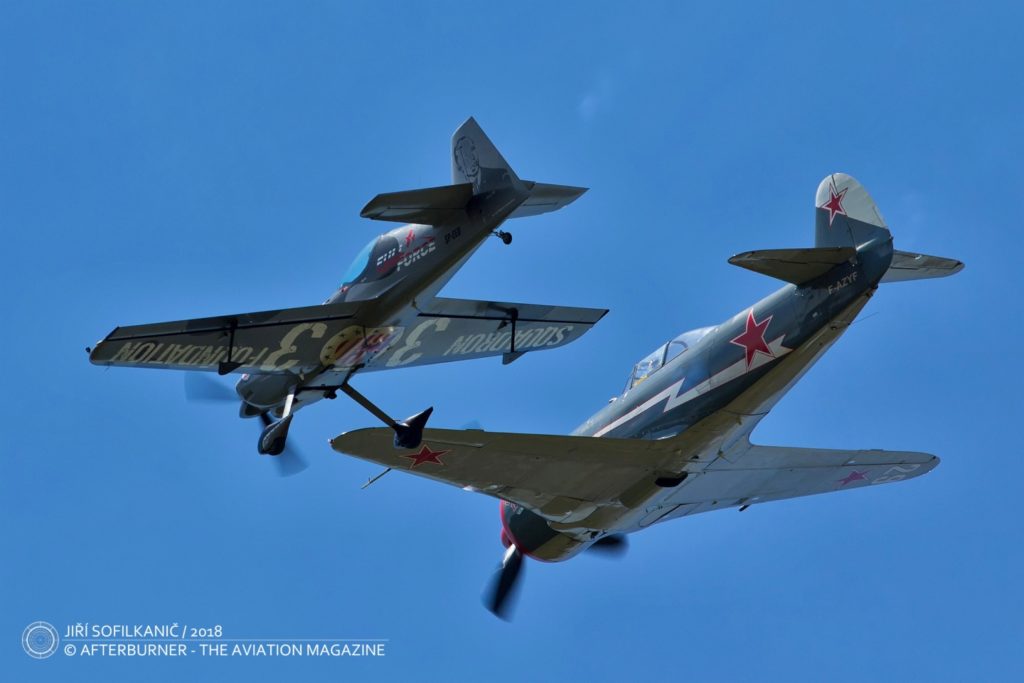 Reading, for example, the posts and comments on the fan page of your aeroplane – yak3.pl on Facebook – it is not hard to notice that the aircraft immediately made a strong impression on Polish aviation enthusiasts.

Mateusz Strama: Yes, the aircraft managed to attract a fair amount of attention and we’re happy about that. Flying it is a great pleasure, which we want to share with others.

Do you already have plans regarding participation of your aeroplane in air shows this year?

Mateusz Strama: This year we are planning to participate in displays in Poland, we already have a few invitations.

Thank you so much for the interview! All the aviation enthusiasts need is to wait until the new season, to have the possibility to marvel at this beautiful and exceptional aeroplane, which the Yak-3U R2000 „Czech Ride” is, without any doubts.While waiting for the new season to start, we can enjoy that there are such people in Poland, as Piotr Kowalski and Mateusz Strama are, which bring vintage, unique aircrafts to our country, and let us to be pleased with their performance and design.