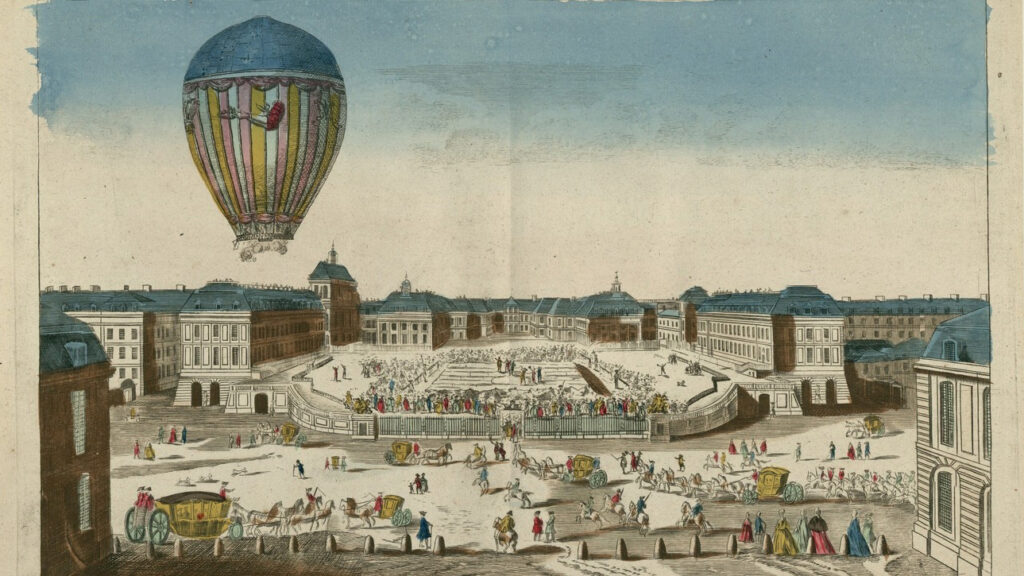 On 20th May 1784, Marchioness and Countess de Montalembert, Countess de Podenas and Miss Lagarde ascended in a tethered balloon of the Montgolfier system and therefore they became the first women ever to fly.

In October of 1783, Étienne Montgolfier became the first human to lift off in a balloon. It occurred during a series of test flights of tethered aerostats the Montgolfier brothers performed in Faubourg Saint-Antoine, one of suburbs of Paris. During that first manned flight ever, Étienne Montgolfier ascended to an altitude of approximately 25 metres. Later the same day, he was followed by Pilâtre de Rozier who also reached that altitude, being the maximum length of the ropes.

On 21st November of the same year, de Rozier and marquis d’Arlandes made the first free balloon flight ever, flying above Paris at an altitude of approximately 3,000 feet.

The Montgolfier brothers and their works opened the era of balloon flights. Series of demonstration flights they performed for the king Louis XVI and other noble public, had secured them funding to continue further development with their aerostats.

In the spring of 1784, the Montgolfier brothers made a few flights with their new balloon, financed by the king himself. It reportedly had a diameter of seventy two feet and was approximately seventy four feet high. Similarly to their trials from previous year, the flights were performed from a location close to Réveillon workshop at Saint-Antoine.

Regrettably, we do not know much about the four abovementioned ladies who became the first women ever to fly. It was still just a tethered flight; however it should be pointed that it occurred only six months after the first human balloon flight in history.

On 4th June 1784, those noble French ladies were followed by Élisabeth Thible, who became the first woman to fly in an untethered balloon. Together with Mr. Fleurant, she made a flight that lasted approximately 45 minutes, covering the distance of four kilometres.

On 22nd April 1965, PL-12 Airtruk, an agricultural aircraft developed by Australian manufacturer Transavia Corporation, performed its first flight. The story of that quite odd-looking aircraft goes back to Italy and the mid-1940s. At that […]

Maiden flight of PZL TS-11 ´Iskra´, a Polish jet trainer aircraft. The idea of creating a jet-powered trainer for the Polish Air Force was born in the middle of 1950s, upon the introduction of jet […]