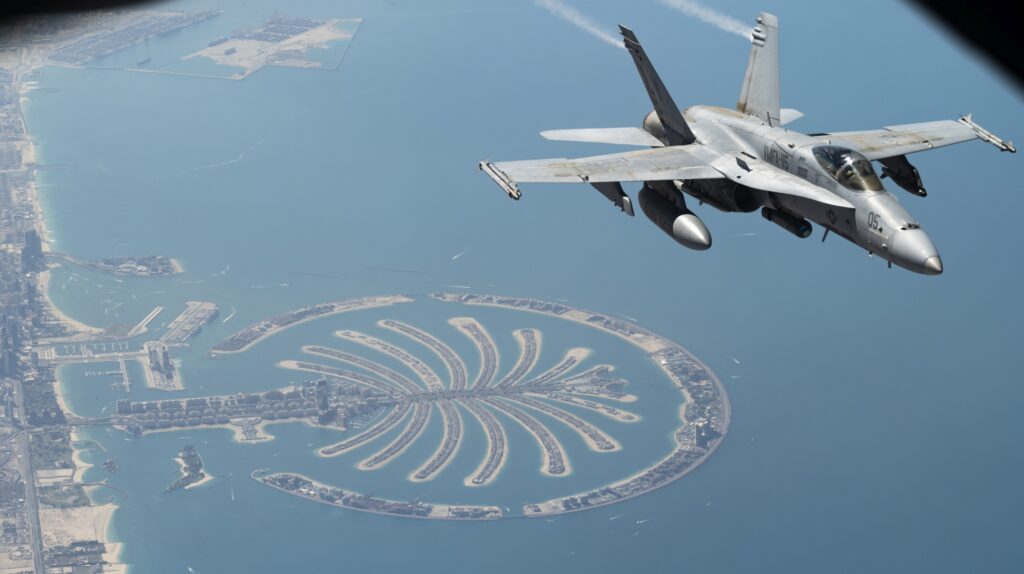 Shortly after the arrival to Saudi Arabian air base, the VMFA-115 was involved in daily combat operations held in the region. Particular emphasis was placed on interoperability and cooperation with the USAF and partner nation units.

One of the primary goals of the VMFA-115 deployment into the Middle East theatre is to work with joint and coalition forces to ensure peace and stability in that area.

´This sends a clear and unequivocal message to the region´, said Col. Jason Smith, 378th Expeditionary Operations Group commander, and added: ´Our resolve remains very strong about the peace and security of the Middle East. We are willing to defend it if needed.´

The VMFA-115 was established on 1st July 1943, as the Marine Fighting Squadron 115 (VMF-115). At that time, the squadron was based at Santa Barbara, California and was equipped with F4U Corsair fighter aircraft. In May of 1944, the unit joined the Pacific campaign and opened its combat record.

After surrender of Japan, the VMFA-115 for a short time was deployed to Peking, China. Later, the squadron was participating in the Korean and Vietnam Wars, flying there 9,250 and 34,000 combat sorties, respectively. Between the 1950s and 1980s, the VMFA-115 flew F9F-2 Panther, F4D-1 Skyray and F-4B Phantom II jet aircraft.

In 1985, the squadron was equipped with F/A-18 Hornet jets, the aircraft used by the ´Silver Eagles´ until today, although with several upgrades and modifications. In 2003, the VMFA-115 for the first time took part in combat operations in the Middle East, participating in Operation Iraqi Freedom. Next, the unit was alternately deployed in the East Asia region and the Middle East.

Nowadays, Marine Corps Air Station Beaufort, South Carolina is the home of the ´Silver Eagles´. According to the 2019 Aviation Plan, the unit has to be the third Marine squadron being re-equipped with F-35C Lightning II 5th generation fighter. Although the latest deployment will probably cause a delay in that transition, previously scheduled for 2023.

In February of 2022, the VMFA-115 took part in the refuelling practice, performed together with the 980th Expeditionary Air Refuelling Squadron and its KC-10 aerial tankers. The exercise was executed in the United Arab Emirates airspace. A few pictures taken during this training were used for illustration purposes of this article.

All photos and quotations © U.S. Department of Defence (DoD), cover photo: one of the ´Silver Eagles´ F/A-18 flies over the Palm Islands of Dubai, during the refueling exercise with the 980th Expeditionary Air Refuelling Squadron (USAF photo by Tech. Sgt. Christopher Ruano). DoD information materials were used, in compliance with Public Domain licence. The appearance of U.S. Department of Defense (DoD) visual information does not imply or constitute DoD endorsement.

At the beginning of May, the Royal Australian Air Force and the US Air Force concluded a bilateral tactical airlift and airdrop exercise, codenamed Global Dexterity 2022. The training was performed in the Hawaii operational […]

During the exercise Emerald Warrior 20-1, Special Tactics Airmen performed a simulated Forward Arming and Refuelling Point (FARP) for F-22 Raptors. For the first time ever, FARP was carried out in an extreme cold weather […]