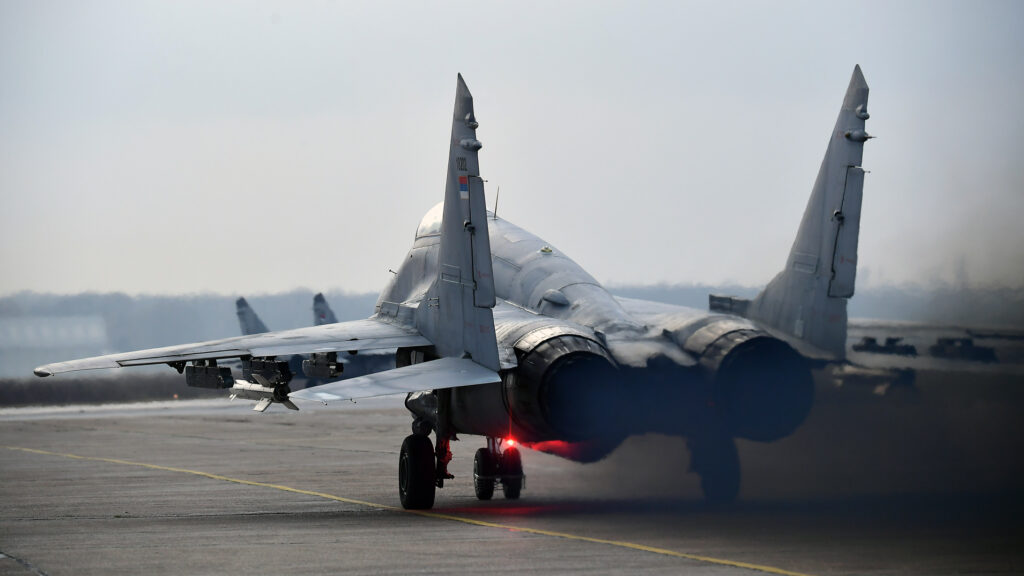 Although in most of the European countries, the MiG-29 jets are about to be retired soon – usually going to be replaced by aircraft of Western design – there is a country where that aircraft is still a backbone of the fighter aviation. Obviously, we are talking about Serbia that received another four aircraft of that type exactly one year ago, in June of 2021.

Nominally, the MiG-29 (NATO reporting name ´Fulcrum´) is still included in the inventory of Bulgarian, Polish and Slovak air forces. Nevertheless, they are used there only in small numbers and with their days already counted – Slovakia and Bulgaria are eagerly awaiting deliveries of already ordered F-16 Fighting Falcons and Poland is consequently limiting the airworthiness of its ´Fulcrums´, at the same time preparing for acquring F-35 Lightning II.

The other European MiG-29s are operated by Belarus and Russia, however being successively replaced there by Sukhoi fighters, as well as in Ukraine – where, until the war with Russia, were being used together with Su-27 jets.

Therefore, Serbia is the only European country with fighter aviation based solely on the MiG-29 aeroplanes. Inventory of the Serbian Air Force and Air Defence (Ратно ваздухопловство и противваздухопловна одбрана Војске Србије) includes a total number of fourteen ´Fulcrums´, used for air defence and training purpose, being assigned to the 101st Fighter Squadron.

Six of those aircraft were donated by Russia based on an agreement concluded back in 2017 and executed in February of 2019. Four of them were then upgraded to so-called 4+ generation standard at the 558th Aviation Plant in Belarus. They were officially introduced into operational service in June of 2021.

An interesting fact is that Serbia is also the sole country outside of the Eastern Europe that is still providing training for new ´Fulcrum´ pilots. Both Bulgaria, Poland and Slovakia already focused their resources on preparing new personnel only for the Western-made fighter aircraft.

Press release related to flight training of the youngest MiG-29 pilots was recently issued by the Serbian MoD. According to that information, the abovementioned activities are currently ongoing at ´Colonel-Pilot Milenko Pavlović´ air base at Batajnica, the Belgrade area.

The young ´Fulcrum´ pilots are performing a full scope of live-fly missions, such as airspace control, aircraft interception, high-altitude flights and flying with heavy payload. The training missions are being executed day and night, in all weather conditions.

Nevertheless, it seems that also the days of the Serbian ´Fulcrums´ are counted. In the face of change of the political situation in Europe and war in Ukraine, the Serbian authorities are searching for an alternative to Russian-made fighter aircraft.

On 11th April 2022, Aleksandar Vucić, the President of Serbia, announced that the country is going to acquire twelve Rafale multipurpose fighters from France, as well as purchase similar number of the second-hand Western jets. Although the Serbian president had mentioned that negotiations are already ongoing, no detailed information were disclosed so far.

VMM-161 in training of high-altitude missions

At the end of May, the Marine Medium Tiltrotor Squadron 161 (VMM-161) performed a series of live-fly trainings at the Mountain Warfare Center in Bridgeport, California. The exercise included logistic support mission and high-altitude flights […]