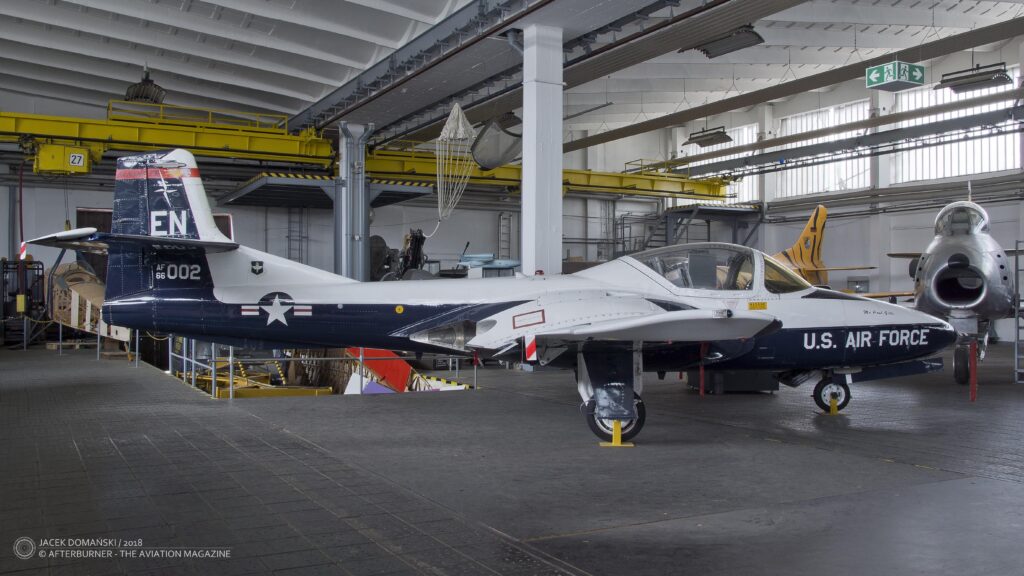 From its creation in December of 1947, the independent US Air Force struggled with significantly downsized training structures. All primary and basic pilot training activities – officially called jointly as Basic Course – were carried out by a fleet of ageing North American AT-6 Texan aircraft, in their D and F variants. The need for modern, differentiated by task, training aeroplanes was more than obvious.

In 1948, a conceptual design of North American XT-28 was approved and two prototypes ordered. The new aircraft, primarily intended to replace the Texan, entered operational service in the mid-1950, receiving an official designation T-28 Trojan.

Nevertheless, Air Training Command (ATC) still acted as a bottleneck, especially during the Korean War and constantly increasing demand for military pilots caused by tensions between the USA and the Soviet Union. In order to solve that issue and accelerate the training process, the ATC has decided to reform the existing course by splitting it into primary and basic phases.

As a direct consequence, competition for a new primary trainer was launched. Between 1949 and 1951, three prototypes of such training aircraft were evaluated – Fairchild YT-31, Beech YT-34 and Temco YT-35. Finally, the aircraft manufactured by Beech was chosen and entered service in 1953 as T-34A Mentor.

Introduction of the T-28A and T-34A temporarily solved the problems with initial pilot training, thus allowing the ATC to take care about the next step in reforming the tuition programme. It was already clear that both primary and basic courses needed a jet-powered aircraft, to keep the military pilot training up to date.

In April of 1952, having this goal in mind, the ATC issued a requirement called Trainer Experimental (TX), that specified a future primary trainer as a lightweight, jet-powered training aircraft with two ejection seats. And, as previously, it was answered by three aircraft manufacturers. This time it was Cessna with an aeroplane designated Model 318, the Beech company, proposing Model 73 Jet Mentor and Temco with an aircraft called Model 51.

Among those three aircraft, only Cessna proposed a trainer with side-by-side seating. It was considered a big advantage by the USAF and finally was one of the reasons that in 1954 the company was awarded a contract for three prototypes, designated as XT-37. Although the first prototype crashed during spin tests, eventually the trainer proposed by Cessna turned out to be simple to maintain, aerodynamically clean, agile and responsive during flight and generally easy to handle. As a result, eleven pre-production aircraft were ordered by the ATC in late 1954, followed by subsequent orders for 444 serial aeroplanes.

The small and vigorous aircraft quickly gained recognition and was liked by both instructor and pilot students. Nevertheless, the T-37, for all its advantages, was given to one particular flaw. It was very, very noisy, even by standards of a jet aircraft.

Its first variant, the T-37A, was powered by two Continental-Teledyne J69-T-9 turbojet engines (being a licensed-variant of the French Turbomeca Marboré powerplant) – relatively small in size but generating a specific, high-pitched tone. It was a reason the aircraft received several nicknames, pointing at this drawback: ´Screaming Mimi´, ´6,000 pound dog whistle´ or ´Converter´ (because of converting fuel and air into noise). Even the official name – T-37 Tweety Bird (or just Tweet) – was referring to that specific whistle.

Apart from all that jokes related to the sound generated by the T-37, it represented a serious issue for the USAF and a lot of money and time was spent with soundproofing buildings at air bases where the Tweety Bird was operated. Not mentioning the mandatory ear protections for all personnel.

Nevertheless, the T-37 turned out to be a reliable and effective trainer that remained in operational service for over 52 years, successfully surviving any attempts to replace the Tweety Bird with another design. Apart from the US, the Cessna trainer jet was operated by almost 20 air forces all over the world, including Brazil, Burma, Greece, South Korea, Turkey or Morocco.

In 1959, an upgraded variant designated T-37B has appeared, featuring a modified J-69-T-25 engines and new avionics. A total number of 552 aircraft in the modified version were built and additionally all existing T-37A were subsequently upgraded to the T-37B standard.

The aircraft with number 66-8002 was one of the forty seven Tweety Birds acquired by the West German government for purpose of training German Air Force pilots in the USA. Those T-37Bs were assigned to the 80th Flying Training Wing at Sheppard air force base. In 2017, the aircraft became a part of an impressive aviation collection at Luftfahrtmuseum Wernigerode, Germany.