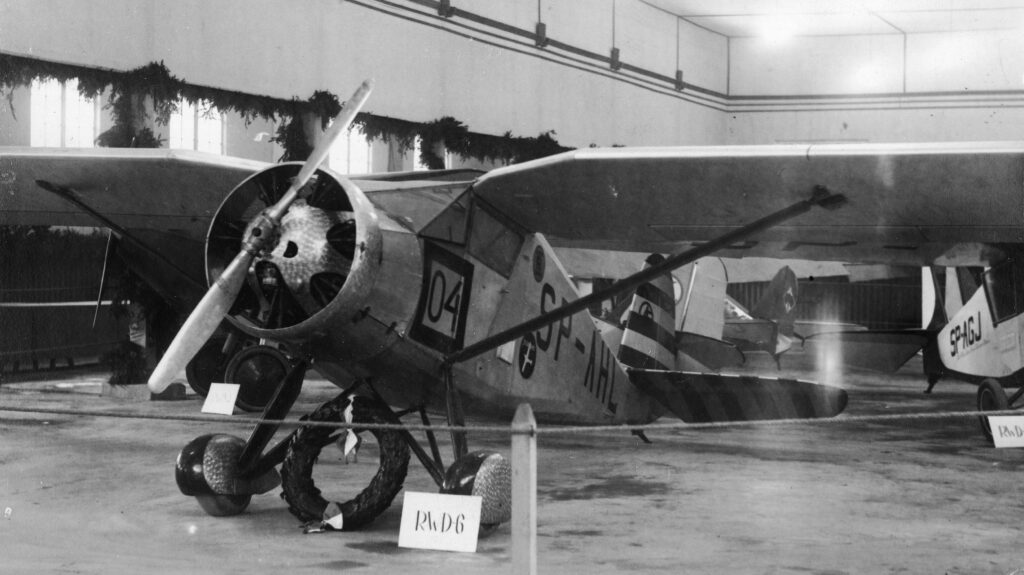 On 3rd June 1932, the RWD-6, Polish sports and touring aeroplane, made its maiden flight.

The aeroplane was created by one of the most well-known Polish aviation manufacturers of the inter-war period, RWD design bureau. It was designed specifically with intention to participate in famous aviation event at that time in Europe – Challenge International de Tourisme (the FAI International Tourist Aeroplane Competition).

The RWD company already built two other aeroplanes that took part in that competition in 1930, but unfortunately without significant successes. Stanisław Płończyński, flying RWD-2, took 21st place, while Jerzy Bajan, in RWD-4, was 32nd.

This time, the construction team of Stanisław Rogalski, Stanisław Wigura and Jerzy Drzewiecki – from whom the RWD acronym came from – focused on making more modern aircraft of the advanced design, quite significantly different from its predecessors.

The RWD-6 was a strutted high-wing monoplane of a mixed construction featuring an enclosed two-seat and dual control cabin in which the crew sat side by side – unlike in previous RWD aircraft that had seats in a tandem configuration. The aeroplane had a fuselage of metal structure with nose section cladding and engine cowling made of aluminium, while the rest of the fuselage was covered with canvas. The RWD-6 had rectangular, single-spar wings of wooden construction, covered with canvas and plywood. They were equipped with flaps and automatic slots, increasing the short take-off and landing capabilities of the aeroplane. Additionally, the wings could be folded back for the needs of the aircraft transportation or storage purposes. The RWD-6 was powered by 7-cylinder Armstrong-Siddeley Genet Major radial engine of 160 hp, equipped with a two-blade metal propeller. It had a fixed main landing gear with a tail skid.

With the financial support of Airborne and Anti-gas Defence League (Liga Obrony Powietrznej i Przeciwgazowej), the Ministry of Transport and employees of ‘Lot’ Polish Airlines, three examples of the RWD-6 were built at the workshops of Students’ Mechanical Club of Warsaw University of Technology, located at Okęcie Airport near Warsaw.

The maiden flight of the first RWD-6 took place on 3rd June 1932 from the aforementioned airfield. The aeroplane was flown by one of its constructors, Jerzy Drzewiecki. Soon, all three aircraft were finished and received civil registration markings SP-AHL, SP-AHM and SP-AHN.

During further factory trials, an accident occurred, involving the RWD-6 SP-AHM. While flying at high speed and low altitude, both wings of the aircraft broke off. The fuselage, after rotation along its axis, fell to the ground, hitting it with the landing gear. The aeroplane was destroyed, but fortunately the pilot, Jerzy Drzewiecki – although being seriously injured – survived that accident.

Subsequently, two remaining RWD-6s underwent necessary modifications to horizontal stabiliser adjustment system. Shortly afterwards, both aircraft were considered ready to take part in Challenge 1932 under the restriction that, for safety reasons, they should not fly at maximum speed except for the final trial.

The International Tourist Aeroplane Competition Challenge 1932 was held in Berlin, between 11th and 28th August. The competition included a technical trials, a rally around Europe covering distance of 7359 km, as well as an air race on a route of 300 km. During the technical part of the Challenge the RWD-6 achieved minimum speed of 57.6 kph, maximum speed of 216 kph, wings disassembly and assembly time of 2 minutes and 13 seconds, as well as take-off distance of 111 metres to an eight-metre-high gate. Both of the RWD aeroplanes received the highest score for technical evaluation of all participating aircraft.

Eventually, the competition was finished with victory for the Polish crew of pilot Franciszek Żwirko and on-board mechanic Stanisław Wigura, who flew the RWD-6 SP-AHN with starting number 06. Pilot Tadeusz Karpiński and mechanic Stanisław Zientek, who were the crew of the second RWD-6, SP-AHL with starting number 04, finished in the 9th place. Nevertheless, taking into consideration that as many as 43 crews took part in the competition, it was also a very good result.

Żwirko and Wigura´s victory in the 1932 Challenge was at the time the greatest international success of Polish aviation. Unfortunately, just two weeks later, the winning team died when their victorious RWD-6 SP-AHN crashed during a thunderstorm on the way to an aviation meeting in Prague, Czechoslovakia.

After investigating the causes of this tragic event, it turned out that although victorious, the Polish design had one serious flaw – the wing struts. They were too weak for that aeroplane, what meant that the wings were not rigid enough, being prone to twisting and bending at higher speeds and under stress.

As a result, the last surviving example of the RWD-6 (SP-AHL) underwent further modifications. The wings were strengthened by installation of new V-shaped struts and the aircraft was re-designated RWD-6bis.

For the first time, the aeroplane was flown in September 1933, by Jerzy Drzewiecki. It became a property of the Ministry of Transport and was used by the RWD company team for a few further aviation competitions.

Yet in September of 1933, during the 5th National Tourist Aviation Competition, the RWD-6bis took 10th place and then, on 23rd June 1934, finished second in the 6th Flight of the South-Western Poland. Finally, the aircraft was scrapped on 22nd April 1935.

The RWD-6 was the first Polish short take-off and landing aircraft. It was the first one of the series of another RWD-made STOL aeroplanes that included RWD-9, RWD-13 and RWD-15.

Franciszek Żwirko and Stanisław Wigura, as well as their triumph in the 1932 Challenge were honoured in 1993, when the 28th of August was officially recognized as the Polish Aviation Day.

On 27th August 1783, French scientist, professor Jacques Charles and engineers Anne-Jean Robert and Nicolas-Louis Robert, have launched the first ever hydrogen-filled balloon. Although the idea of ballooning was as old as ancient China (approximately […]

On 22nd April 1965, PL-12 Airtruk, an agricultural aircraft developed by Australian manufacturer Transavia Corporation, performed its first flight. The story of that quite odd-looking aircraft goes back to Italy and the mid-1940s. At that […]

On 17th June 1910, Vlaicu I, an aircraft built by Aurel Vlaicu, performed its maiden flight near Cotroceni Hill (Dealul Cotroceni) in Bucharest. It was the very first flight of a powered aeroplane in Romania […]