On 9th May 1995, at the 50th anniversary of the Victory Day in Europe, during the grand ceremony and with participation of 55 official foreign delegations, the memorial complex at Poklonnaya Gora in Moscow was officially opened by Boris Yeltsin, the President of Russia. Occupying an area of 135 hectares, the Victory Park (Парк Победы) became one of the largest memorials in Russia and in the world.

The location, Poklonnaya Gora (Поклонная гора) hill in the western part of Moscow, was not selected accidentally. Used to be one of the highest spots in the Russian capital and providing the exceptional view of the city, the hill was a traditional place where travellers to Moscow from the West were expected to stop and bow to pay homage to the city – and a literally translation of the Russian name means exactly ´bow down hill´. 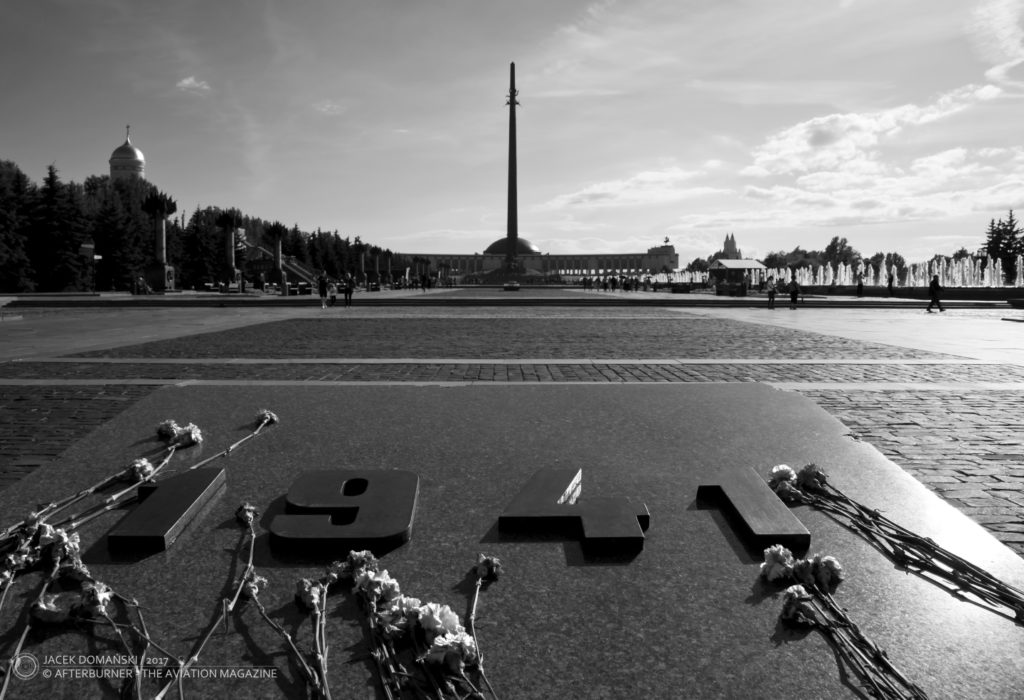 The name of the hill was for the first time mentioned as early as in 1368. A few centuries later, it was the place where Polish military commander, Stanisław Żółkiewski, met with the delegation of Moscow citizens. In 1812, Napoleon Bonaparte was waiting at Poklonnaya Gora for the keys to the Russian capital.

Initially, the first idea to turn the hill into the war memorial was born already in 1942, shortly after the Battle of Moscow. However, after the war it was put on hold by Stalin himself. After his death, the idea returned, being supported by Zhukov, other military commanders and some politicians. As a result, in 1957 it was decided to create the memorial at Poklonnaya hill and next year a foundation stone was erected.

Regrettably, two architectural competitions organized in 1957 and 1958 were not resulting in satisfactory and acceptable project of the memorial. Finally, in 1961 the hill was turned into a park and the further works were suspended for years.

The final project of the memorial complex came in 1979, as a result of the third contest. The proposal submitted by the group of architects and sculptors led by N.V. Tomsky and A.T. Polyansky was accepted a year later, and finally in 1985, the works started again.

It was decided that the museum would be financed directly by the Soviet Union citizens, instead of state budget, and the massive fundraising campaign was launched. An official opening of the museum was planned for 1989, however the political and economic situation caused that museum was not finished on time. Moreover, the construction works were suspended again. 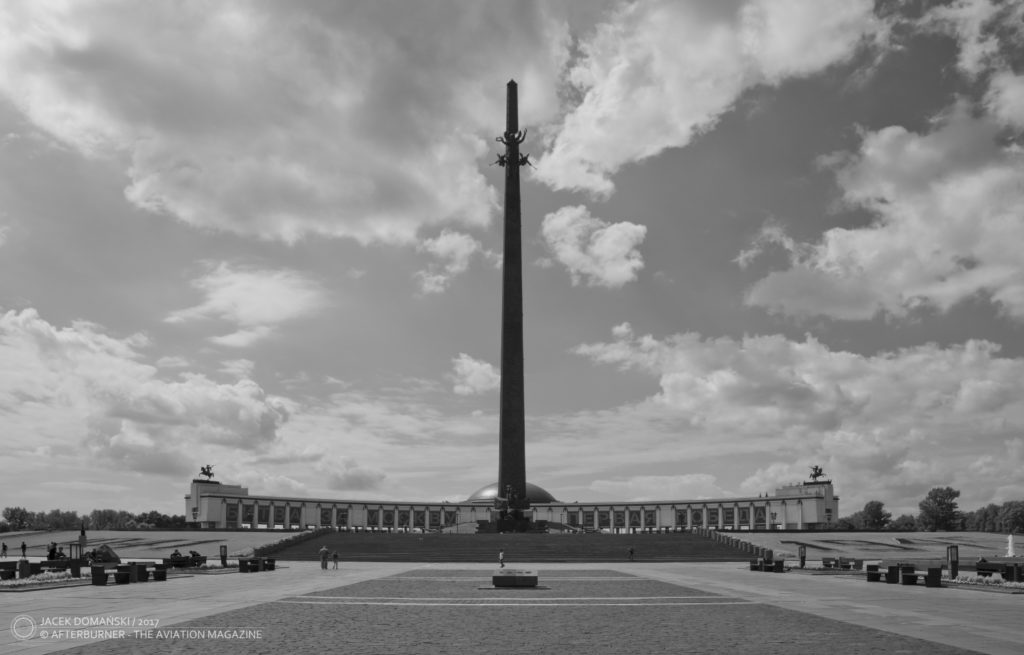 The top of Poklonnaya Hill, with the Victory Museum

Only the oncoming 50th jubilee anniversary of the Victory Day motivated the Russian authorities for finalizing the project. Particular halls and exhibitions were opened successively, before completion of the whole memorial complex – ´Defenders of the Fatherland´ in 1993, the Hall of Fame and the Hall of Memory and Sorrow in 1994.

Finally, on 9th May 1995 the memorial at Poklonnaya Gora was officially opened. That day, the annual Victory Day Parade was also organized there, instead of traditional location at the Red Square. Several heads of state arrived to Moscow and participated in the celebration, including the President of the United States, Bill Clinton, and British Prime Minister, John Major.

Today, 25 years from that day, the Victory Park remains one of the most important memorial sites in Russia, focused not only on the memory of Soviet soldiers from the World War II, but also acting as cultural and educational site, research and scientific institution and being a part of Russian heritage.

Victory Park includes several separate buildings, exhibitions and other installations, spread across the hill. At the top of the hill, the main museum building is located, housing the Victory Museum (formerly, until 2017, ´Central Museum of the Great Patriotic War of 1941-1945´).

The huge building of the museum is crowned by a dome, covering the central hall of the Victory Museum – the Hall of Glory. It is devoted to the Heroes of the Soviet Union and 11,800 names of soldiers who were awarded this title are carved in the white marble walls of the hall. At the central point, a monumental sculpture by V.I. Znoba – ´Soldier of Victory´, was erected. 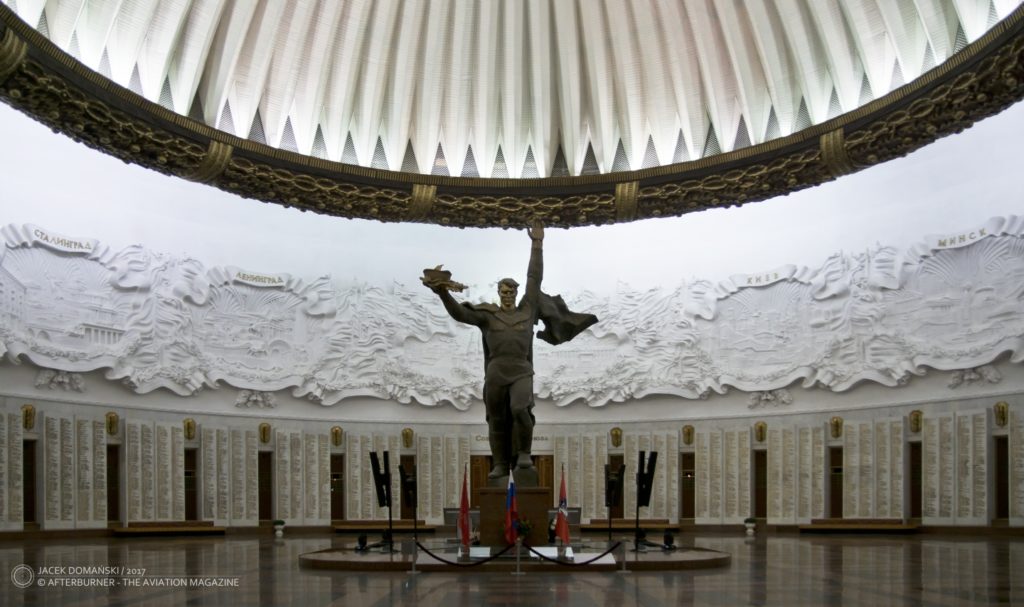 The Hall of Glory – Зал Славы

Exhibitions in the main building are dedicated to the World War II, precisely the years of the Great Patriotic War and focused on the Soviet Union campaigns and battles. There are several dioramas of the main Eastern Front battles there, a separate exhibition devoted to the fall of Japan and another focused on ´Feat of the Nation´. There is also a unique 3D installation moving the visitor back to 1945, to the middle of street fight in Berlin.

The museum takes advantage of the latest audio and video equipment, there are many interactive exhibitions there, three cinema halls and a 3D movie projection at the Hall of Glory. The visitors can also participate in meetings of Stalin´s war cabinet, thanks to the holographic projection.

Open-air displays occupy the significant part of the Victory Park and are divided in two sections: a display of the World War II military equipment and a separate display of aircraft, vehicles and artillery used in the armed conflicts between 1950s and 1980s.

The exhibition of World War II equipment surrounds the main building from the south-west and has two points of entrance and exit. The open-air exhibition has several thematic sections, displaying the Soviet weapons and hardware, captured German and Japanese equipment, guerrilla warfare, railway troops and even the navy.

Mostly, the aviation exhibits can be found in the middle of the display, in a separate section named ´Air Force and Air Defence´. The exposition there includes several interesting aircraft, although most of them are only the replicas made for the display purposes – some of them with using the preserved original parts. There are also remaining parts of two German aircraft wreckages recovered after the war, a Ju 88 bomber and Bf 110 night fighter. 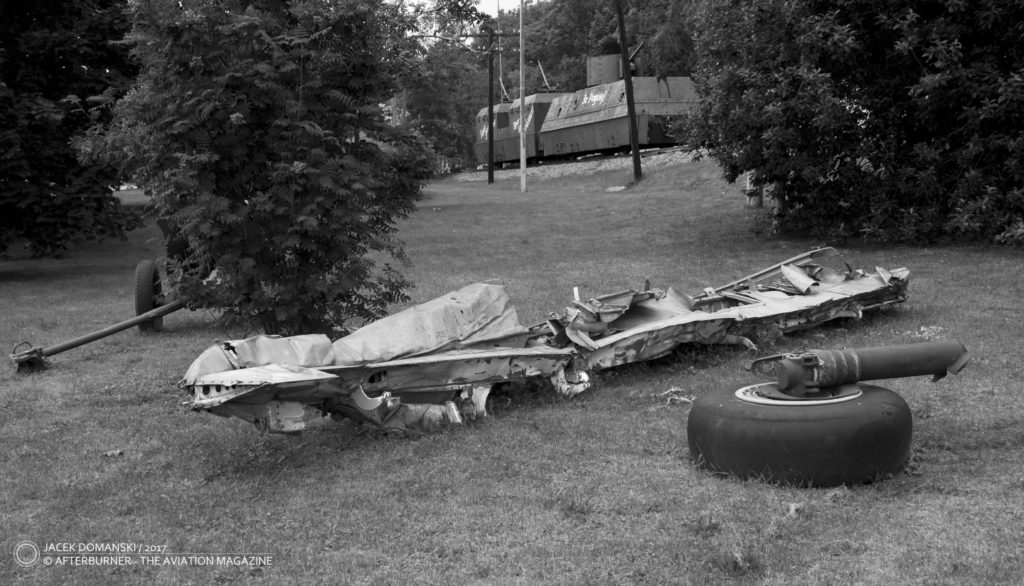 A wreckage of Ju 88, Victory Park

One of the most attractive aircraft displayed there is Ilyushin DB-3F (Il-4), a long-range Soviet bomber used on several air raids on Berlin in 1941. The one exhibited in the Victory Park is the sole survivor of that type. Another attention-drawing exhibits are Kochyerigin DI-6, a little bizarre-looking biplane and Sukhoi Su-2, the first independent aircraft design of Pavel Sukhoi. Regrettably, both are just replicas.

The list of exhibited aircraft includes also Hawker Hurricane, Bell P-63C Kingcobra, LaGG-3 and Bf 109 replicas and a few other aircraft. Admittedly, a replica is not at the same value as the original preserved aeroplane, however it fulfils the educational role, showing the size, shape and other characteristics of the original aircraft.

All exhibits displayed in this section are located under the roof, made of plastic panels. A very good idea how to protect the aircraft from the weather conditions, however the yellow-green colour of the panels is creating an awful light conditions for taking photos, especially in a rainy day.

Two additional aircraft can be found in the section dedicated to captured Japanese military equipment. Kawasaki Ki-48 ´Sokei´ (´Lily´) and Ki-43-II ´Hayabusa´ (´Oscar´) are both replicas but made from the original elements and parts found and recovered from Shumshu island (Kuril Islands) in 2011. Although being just replicas, those aircraft are still unique on the European and global scale – there are only two other Ki-48 on display in the world. It is not surprising they are arousing great interest. 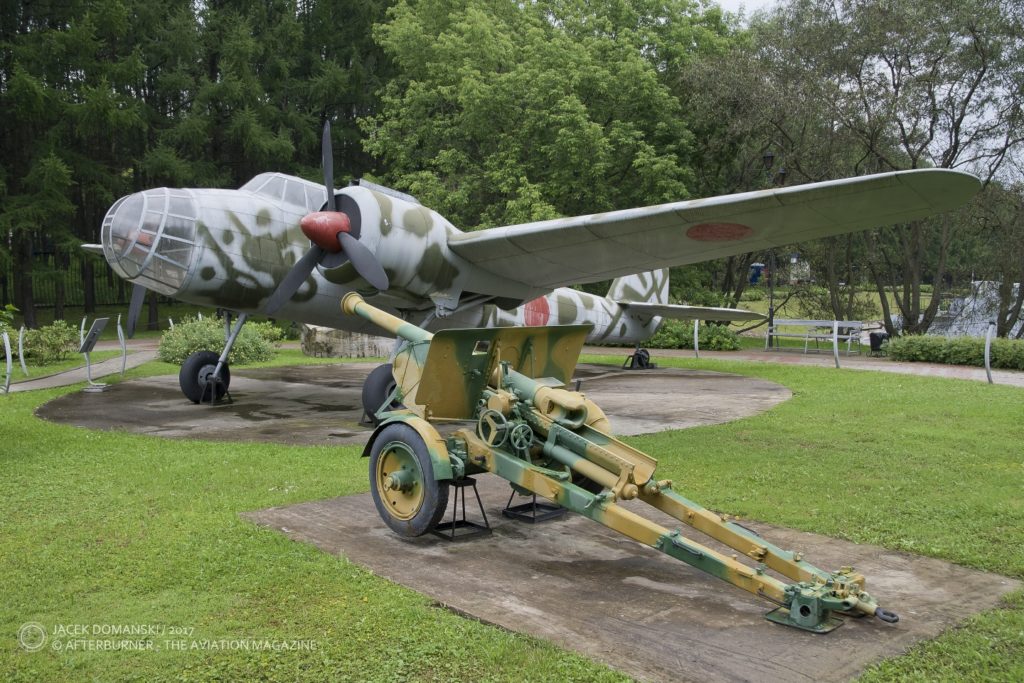 At the foot of Poklonnaya hill, across Poklonnaya Street, there is a separate exhibition of the military equipment used between 1950s and 1980s. Apart from tanks, armoured vehicles and artillery, this section includes several interesting aircraft and is definitely worth visiting.

The biggest aeroplane on display there is Antonov An-12, a four-engined turboprop transport aircraft. Next to it, a collection of fighter jets can be found, including MiG-29, MiG-15, MiG-21 and Su-15. There are also several helicopters there, not only the widely known Mi-8 and Mi-24, but also the less-known naval rotorcraft from Kamov construction bureau: Ka-26 and Ka-26.

Next to this separate display, in the building located at Poklonnaya Street, another independent exhibition can be found – ´Motors of War´, containing more than 60 vehicles from the World War II era. Soviet, German and Allied cars, armoured vehicles and tractors are exhibited there, including ZiS-5, GAZ-64, Dodge WC-63, M3 Scout or Opel Blitz.

Apart from the above mentioned open-air exhibitions, the Victory Park hill buildings include also a Church of St. George, a memorial mosque and Holocaust Memorial Synagogue. There are also several sculptures there and the fountain complex ´Years of the War´. In front of the Victory Museum, there is an eternal flame burning, commemorating the fallen soldiers and serving as reminder of their commitment. 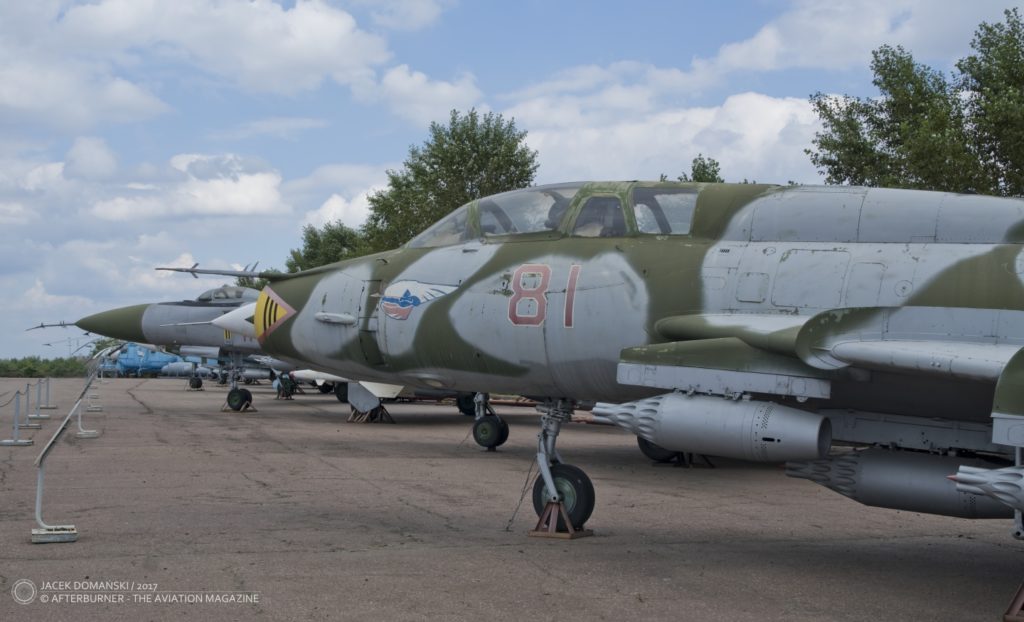 The Victory Park and Victory Museum are easily accessible by Moscow public transport. The underground stations Park Pabiedy and Minskaya are located in the walking distance from the entrances. Arriving to Park Pabiedy station is recommended, as it allows to enjoy the view of the memorial complex from the base of Poklonnaya hill – with the museum building in the background, the fountain complex and the Victory Monument, being a 141.8 metres high obelisk with Nike statue, symbolizing 1418 days and nights of the war.

Tickets can be bought separately for the Victory Museum building and open-air exhibitions, but the combo ticket including all displays and buildings is the best choice. The price of combined ticket is 400 RUB (25 EUR) and it can be bought at any entrance, credit cards are accepted.

As the museum is a mandatory item on the schedule of many organized trips, the main building is usually a bit crowded, especially in the peak hours. However, most trips are limited its activity to the Victory Museum, and they are not visiting the other displays. Nevertheless, the exhibitions located outside the main building are also worth walking a short distance to visit them.

And if you happen to be around, you might be interested in another short walk from Park Pabiedy station – approximately 100 metres down the Kutuzovsky Avenue, in the direction opposite to the hill, the Triumphal Arch of Moscow is located. It was built in 1829-1934 on Tverskaya Zastava Square, to commemorate victory over Napoleon. Dismantled in 1936, the Arch was re-built near Poklonnaya Gora in 1968.

More images from the Victory Park at Poklonnaya Gora: