The 29th edition of the Aviation Fair (Aviatická pout), that was organized during the first weekend of June at the Pardubice airfield, attracted more than 35,000 visitors. During two air show days, the spectators could see a wide range of flying displays, an interesting static exhibition and, in addition, the side-programme on the ground.

When speaking about the 2019 Aviation Fair, the undoubted highlight of the programme should be mentioned first – the Red Bull Air Race Demo display, being the full-scale simulation of the Red Bull Air Race (RBAR), including its racetrack elements, pylons and, certainly, the racing aeroplanes. This time, the RBAR was shown for the Czech spectators by two Czech pilots participating in this air race championships, Martin Šonka and Petr Kopfstein. Unlike the usual Air Race demonstration, in Pardubice both pilots were flying in their everyday aerobatic specials – Šonka raced in Extra 300SR and Kopfstein with his Extra 330SC – as the Edge 540 aircraft they fly while racing in the Red Bull championships already were on their way to Kazan, Russia, for the RBAR event scheduled there on 15th and 16th June. 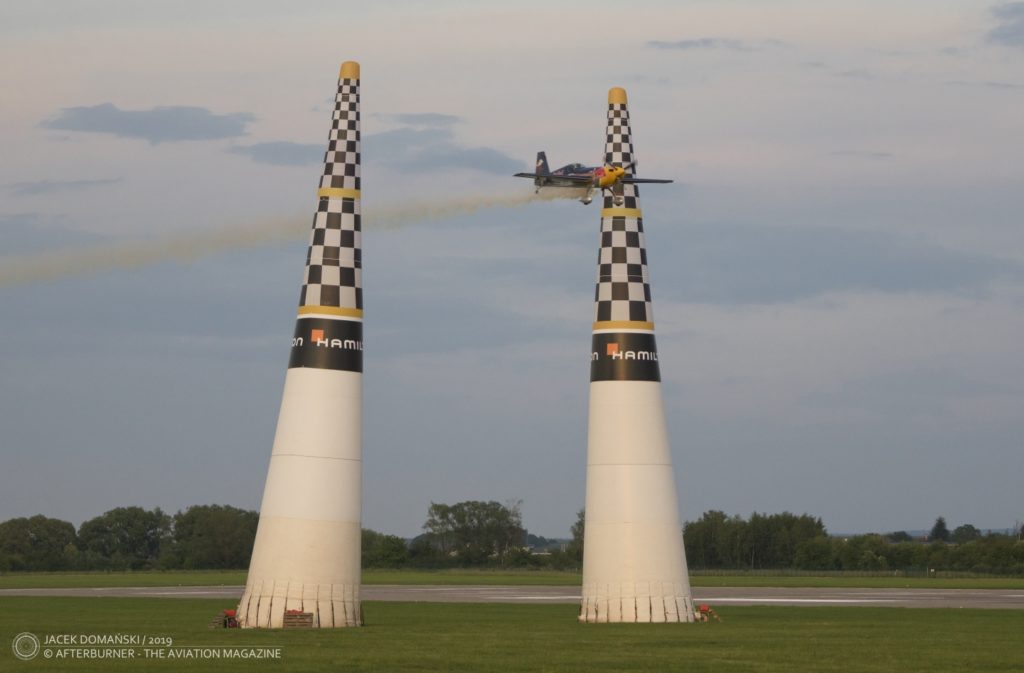 Even though this was just a demonstration of the air race and the aeroplanes on the track were not the RBAR sophisticated race specials, this was an awesome display. First of all, it was a perfect opportunity for Šonka and Kopfstein to show their best skills in front of the home crowd, especially for those who could not go and see the Air Race live. Secondly, that just a few days before the Aviation Fair weekend, the Red Bull company released an information about almost immediate ceasing the RBAR championships series, with 2019 being the last season of air race and additionally limited just to four races.

This information surprised not only all fans of the RBAR championships, but most of all race pilots and their teams. However, this sad news had no impact on performance of both Czech aerobatic champions during the Race Demo in Pardubice. During this thrilling display, Šonka and Kopfstein flown at their best, releasing the spontaneous applause of the spectators. 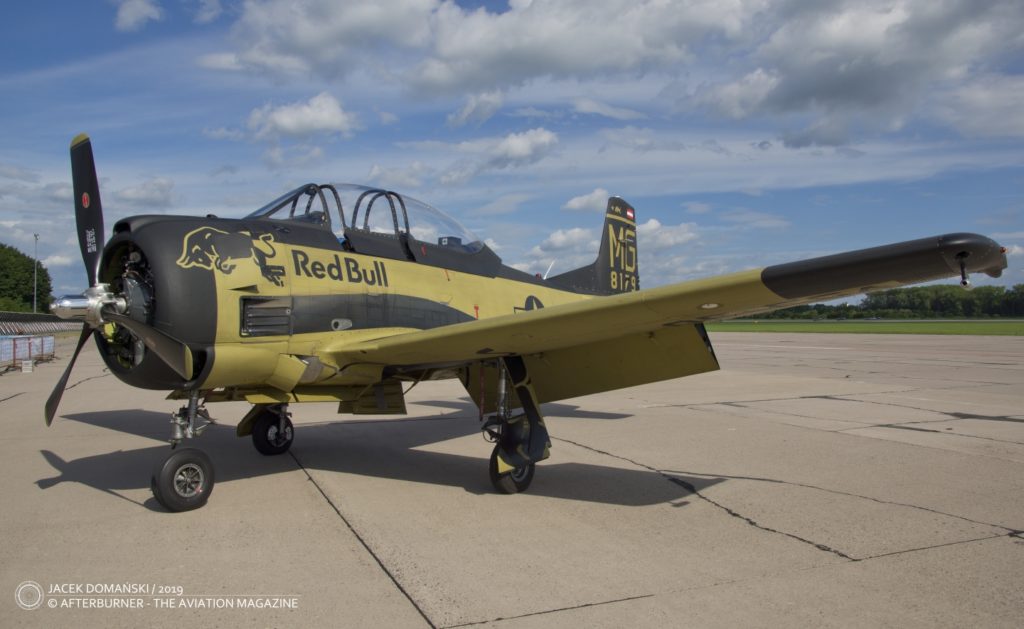 The Aviation Fair is also the air show with the traditional and extensive participation of the Flying Bulls aircraft, and 2019 edition was no exception. Hangar 7, the home base of the Flying Bulls collection, was represented by two warbirds – B-25J Mitchell and T-28B Trojan, accompanied by Bo 105C helicopter. In addition, the Flying Bulls Aerobatic Team arrived from the nearby Jaroměř airfield.

All those aircraft were available on the static exhibition and also performed the flying displays during both air show days. However, a special consideration should be given to the aerobatic team that participated in the Aviation Fair for the twenty-fifth time. On the occasion of their 25th anniversary display at the Aviation Fair, the Flying Bulls Aerobatic Team prepared the world premiere of new aerobatic figure, called Double Mirror Loop – during this manoeuvre, the team was performing a loop together, while still flying in the double mirror figure.

The Flying Bulls Aerobatic Team display brought another interesting, and unusual, moment while the XA42 aircraft from the aerobatic team were flying together in formation led by P-51D Mustang, the famous World War II fighter aeroplane.

Another special feature in the Aviation Fair displays is to combine the flying displays with re-enacting performance on the ground. This year – apart from the traditional opening scene with Bleriot XI replica and Czech aviation pioneer, Jan Kašpar – a scene from the Great War years was shown first, then followed by the World War II demonstration. As mentioned, both scenes included the flying displays, a group of World War I aeroplane replicas in a dogfight and respectively P-51D Mustang performing an attack on ground targets. 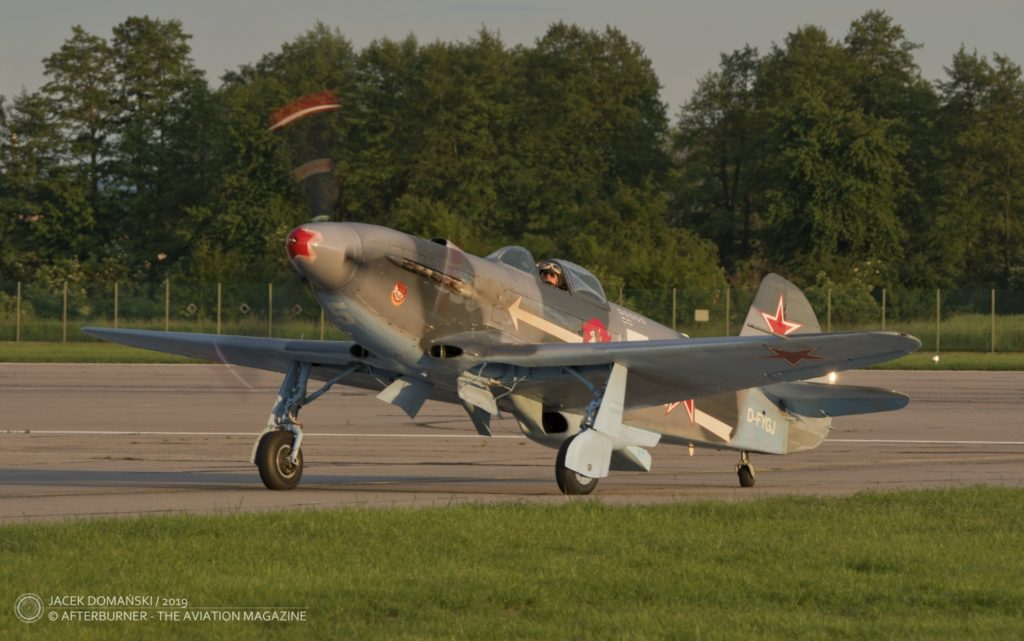 In conclusion the few other dynamic displays should be mentioned, including solo aerobatic shows flown by both Air Race pilots – Martin Šonka and Petr Kopfstein, and a joint display of two training aeroplanes, Yak/C-11 and L-39 Albatros.

In addition to all those dynamic performances, the visitors to 29th Aviation Fair could enjoy the already mentioned static exhibition, where most of the aircraft participating in the flying programme were shown, together with few other interesting aeroplanes, including De Havilland Canada U-6A Beaver, MiG-15UTI (CS-102) or Vultee BT-13B.

The most touching moment of the air show was related to 95-year-old Tomáš Lom, one of the last World War II veterans in the Czech Republic. After 75 years from his training years in the Royal Air Force, Lom again flew in DH. 82 Tiger Moth, a training aircraft from the World War II era and the aeroplane he always recalled with affection. 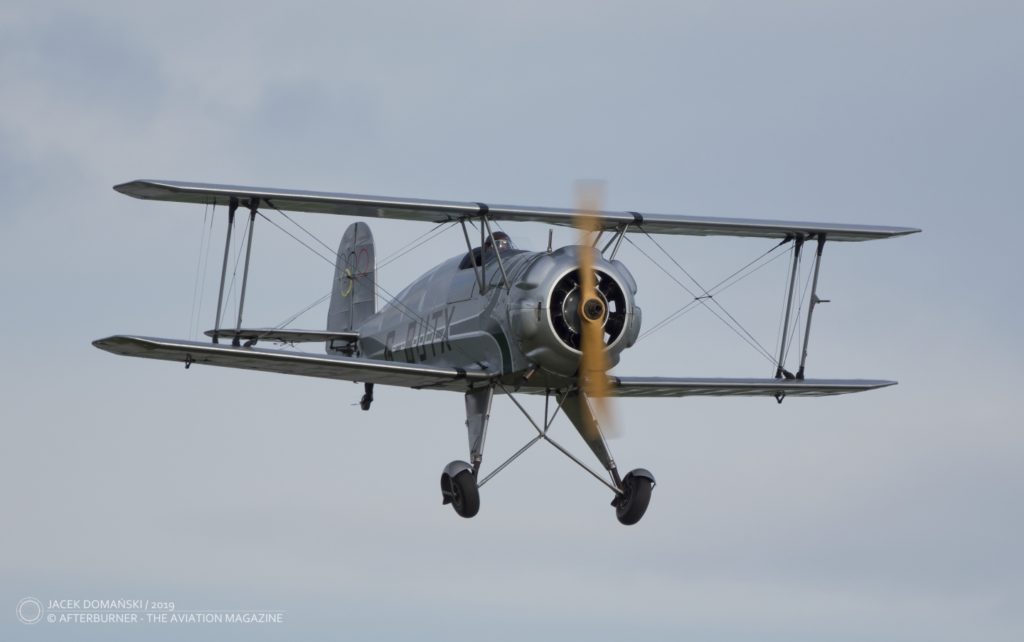 Summing it up, the 29th edition of Aviation Fair air show traditionally offered an exciting programme, this year with additional and unique attraction – Red Bull Air Race Demo. There were a few novelties, both among the flying and static displays and, generally speaking, the entire collection of the aircraft shown during the event was impressive and fascinating. There were no significant cancellations in the programme, the dynamic performances covered more than five hours of both air show days and, what is important, there were no empty slots during the flying displays.

Aviation Fair has long been one of the most important aviation events in the Czech Republic, being the traditional aviation festival for a wide audience. And definitely, the last year´s edition of this air show could be regarded as successful. At present, the organization team is working on 30th, anniversary edition of the Aviation Fair and we hope that the 2020 edition would be even more impressive and exciting.