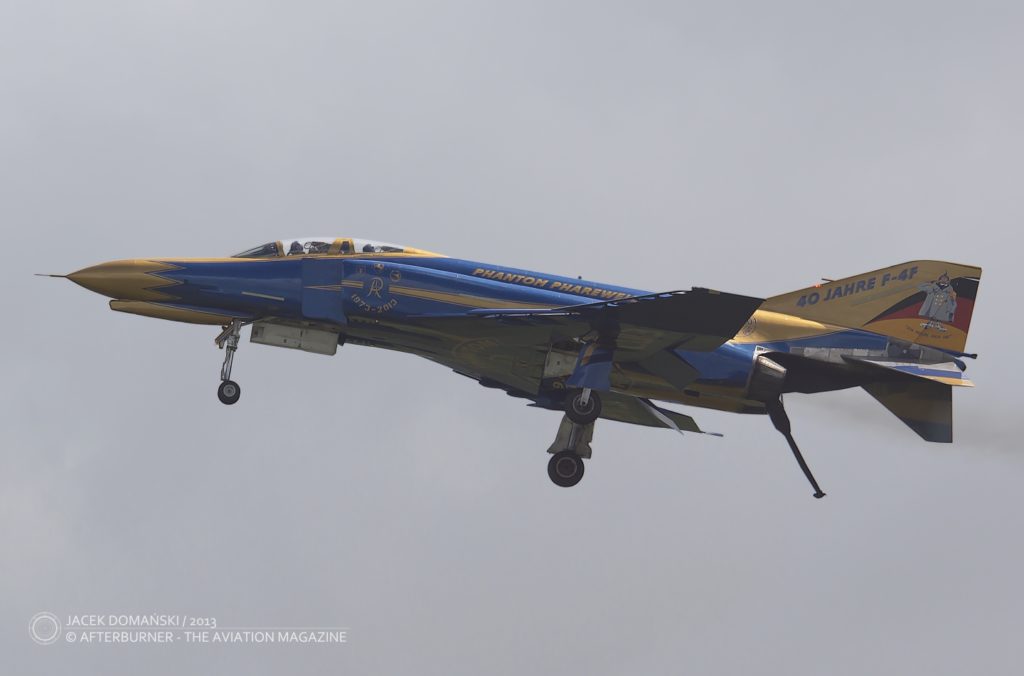 It all began in the late 1960s, approximately ten years from the establishment of the German Air Force (Luftwaffe), when the first 88 McDonnel Douglas F-4 Phantom supersonic jets were bought for the air force of the re-founded armed forces of the West German state. Ordered in 1968, the first Luftwaffe operated Phantoms were of RF-4F unarmed reconnaissance version. At a later stage, in 1980s, they all were modernised and upgraded, receiving the air-to-ground attack capabilities.

Shortly after ordering the reconnaissance jets, it was decided that the already obsolete F-104E fighters operated by the Luftwaffe should also be replaced by up-to-date jet and the bidding process started. Several offers were received, including Northrop F-5, SAAB J-37 Viggen, SEPECAT Jaguar and Mirage F1 – but the proposal that turned out to be accepted by the Luftwaffe, came from McDonnel Douglas, offering F-4F Phantom II fighters. The order for 175 aircraft was placed in June 1971.

New Luftwaffe fighters were introduced until 1976, the F-4F were assigned to Jagdgeschwader 71, based at Wittmund, and Jagdgeschwader 74 from Neuburg a.d. Donau. However, soon the limitations of the ordered F-4F version were noticed, as it was the lightened and simplified variant of the F-4E version. The negotiations with the US Government already started at the time of deliveries, and the agreement, leading to the first Phantom upgrade, was then concluded in 1975.

This was just the first of several consecutive upgrading programs implemented on the German F-4F fighters during their 40 years of the operational service. The most significantly improve of the combat capabilities was done through Kampfwertsteigerung (Improved Combat Efficiency) programme – the three-stage modernisation process started in 1983 and finalized 1997.

When the Cold War era was over, the following cutbacks of the armed forces also afflicted the Luftwaffe and the Phantoms. The first purchased RF-4E were all retired in 1994 and the number of fighter jets was also slowly, but surely, reduced – more than 70 Phantoms were sold to Greece and Turkey between 1992 and 1994.

Nothing lasts forever and the initial works on the successor of the Phantom already started in the 1980s, especially with the launch of the ´Future European Fighter Aircraft´ (FEFA) programme in 1983. As a result of the several years of development, the first Eurofighter Typhoon prototype maiden flight took place in 1994. The deliveries of the new multirole fighter for the Luftwaffe began in 2004 and although the first Eurofighters were to replace MiG-29s inherited by the Luftwaffe from the East German Air Force, it was obvious, that as the next step, the Eurofighters would also replace the Phantoms.

The first four Eurofighters arrived to Jagdgeschwader 74 in 2006, however the delays in the production of the new multi-national European jet fighter caused the retiring process and therefore the active service of F-4F were extended as for 2013. Almost all the remaining Phantoms II were located in Wittmundhafen air base and before their retirement managed to perform the air policing duties over the Baltic states in 2005, 2008, 2009, 2011 and 2012. Another Luftwaffe unit operating F-4F until 2012 was Wehrtechnische Dienststelle 61 (WTD 61) in Manching, performing the tasks related to testing and evaluating of military aircraft and aerial weapon systems.

The year 2013 was the final one for the German F-4Fs, or – speaking in Phantom fans terminology – ´the phinal year´. At this opportunity a few farewell events were organized by the Luftwaffe, including the biggest gathering of aviation fans at Wittmundhafen during the ´Phantom Pharewell´ ceremony held in June 2013.

This official farewell event included a spotter day organized on Friday, 28th June, and the public open doors day on Saturday, 29th June. Certainly, such an opportunity to see the German F-4Fs for the last time received a great deal of attention among the aviation enthusiasts. According to the official Luftwaffe information, there were around 3500 spotters from all the continents visiting Wittmund during the spotter day.

There was really all about the F-4F Phantoms II at Wittmundhafen air base that ´phinal Phriday´ – first of all, the visitors to the airfield could see (and photograph) the Phantoms in different camouflage patterns used by the Luftwaffe during the years: the aircraft 38+10 was painted in Norm 72 pattern, 38+33 in Norm 81 colours and then 37+22 in Norm 90 scheme. Then, there were several F-4Fs in the special and occasional paintings, especially 37+01 – the very first Phantom delivered to the Luftwaffe presented in the special farewell golden-blue livery ´First in – Last out´. In short, there were just Phantoms all around there.

Additionally, a couple more interesting aircraft could be seen at the static display – two Belgian F-16s with the special anniversary paintings, Tornados from both RAF and Luftwaffe, Spanish F-18s, P-3 Orion, A-4 Skyhawk, L-39ZA Albatros and many more. The static display was impressive, and it was just a pity that, previously announced, Greek and Turkish Phantoms eventually did not arrive to Wittmundhafen.

A star of the static display was, with no doubts, the Phantom 38+62 used for the engine-warm up-and-run displays that were performed several times during the day. And each display meant not only the ear-splitting roar of its two General Electric J79-GE-17 engines, but also the spectacular smoke effects around the aircraft position. The ones who were able to see this display could, without any doubts, understand why, during their service in the Luftwaffe, the F-4Fs received such nicknames as ´Luftverteidigungsdiesel´ (air defence diesel) or ´Ölofen´ (oil furnace).

It is important to say that all was just perfect during the spotter day, apart the weather. Sometimes it seemed that the ´Phantom Pharewell´ was organized in November rather, not in June. There was merely a constant rain on Friday, just varying from the shower to the downpour, with the additional effects of heavy wind. The temperature hardly reached 15⁰ C. Fortunately, the weather was better on Saturday, allowing some flying displays, especially in the afternoon.

Saturday open doors event was opened for the general public. The static display remained the same, exclude the four Phantoms that were performing the flying displays, that were divided into two blocks – the morning one was a short journey through the aviation history and in the afternoon, there was a Phantom formation and solo display.

There were some cancellations from the morning programme, due to the adverse weather conditions, but even after the displays were an opportunity to see many interesting aircraft, as Bücker Bü 131 ´Jungmann´, Boeing Stearman, Yak-52, Bo 105 and A-4N Skyhawk. At the end of the Skyhawk demonstration the failure was reported and, as the precaution, the ´Scooter´ had performed the unexpected additional display – the emergency arresting gear landing. Everything went well, there was no need for any emergency crews´ reaction and the Skyhawk taxied off the runway unassisted.

In the afternoon, the formation of four Phantoms, the previously mentioned three aircraft with the different camouflage patterns and 37+01, took-off for the final flying performance that included the formation flying, solo display and drag parachute landing. All four aircraft taxied in front of the spectators´ line several times, giving them the opportunity for some last photos. The last official Phantom landing on the Wittmundhafen runway was performed by the 37+01 crew: Geschwaderkommodore of JG 71 ´Richthofen´, Oberst Gerhard Roubal and Oberstleutnant Alex Berk. At the end of F-4F display, the two Eurofighters appeared in the sky, as clear sign that there is the time to pass the baton to the new generation jet fighter. The following short flying demonstration performed by the Eurofighters was the final point of the ´Phantom Pharewell´ flying programme. All four Phantoms were parked in the centre of the taxiway, together with both Eurofighters. Then, the engines of all F-4Fs were suddenly shut down simultaneously, underlining the end of the 40 years long Phantom era in the Luftwaffe with the following moment of a sad silence… Auf Wiedersehen Phantom – Moin Eurofighter!

According to the official information, almost 130,000 visitors arrived to Wittmundhafen air base to say their farewell to the German Phantoms. The aircraft that, initially, had to be just a temporary solution for the Luftwaffe – by the time the next generation European fighter jet would be designed and implemented – stayed in the active service for four decades, clocking up 279,000 flying hours. The F-4Fs in JG 71 would be replaced by 18 Eurofighters, with the planned ´combat ready´ status for 2018.

The official retirement performed in the front of the parked aircraft was the final point of the ´Phantom Pharewell´ event. All that left for the F-4Fs from Wittmundhafen was to perform their last task – a short flight to Jever air base, the destination where the aircraft would be disarmed and scrapped.

The Panavia Tornado IDS (interdictor/strike) 43+25, from the Taktisches Luftwaffengeschwader 51 ´Immelmann´ with the special ´Tiger livery´ for the 2019 NATO Tiger Meet in Mont-de-Marsan. The photo was taken at the TaktLwG 51 home base […]

The Luftwaffe operated CH-53GS heavy-lift helicopter, returning from the evening COMAO mission to the 22nd Air Force Base in Náměšť nad Oslavou– photo taken in May 2019, during joint tactical helicopter exercise Dark Blade 2019. […]