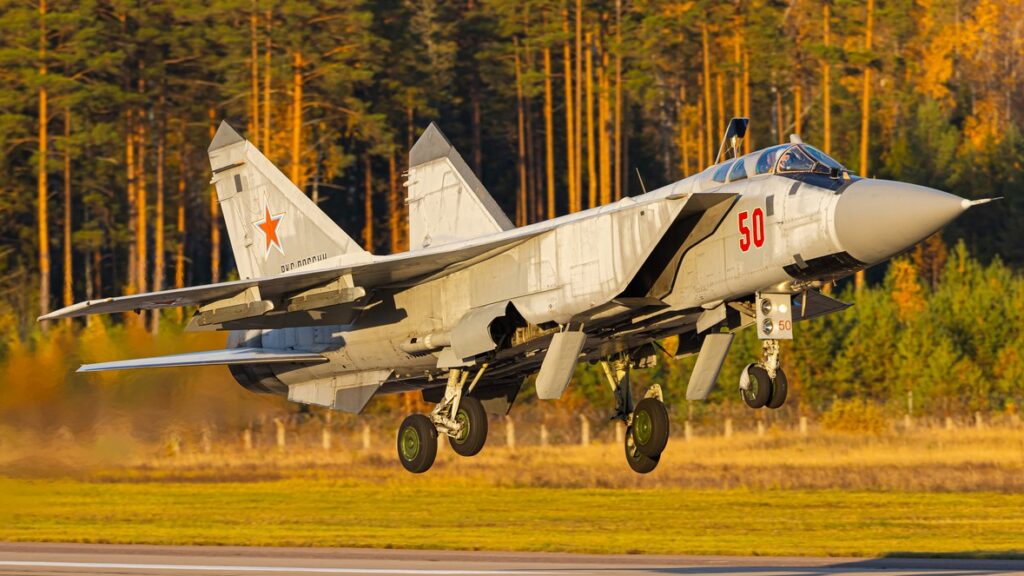 In the middle of October, fighter aviation of the 6th Red Banner Leningrad Army of Air and Air Defence Forces (6-я Краснознамённая Ленинградская армия Военно-воздушных сил и противовоздушной обороны) took part in a live-fly training activity, combined with practicing of air combat elements, that was held in the Tver region.

The 790th Fighter Aviation Regiment (790-й истребительный авиационный полк) being a part of the 6th Army, was established already in 1941 – when the World War II was at its peak. In 1952, the regiment was relocated to Khotilovo (Хотилово) air base in the Tver region, where it is being based until today.

In 1979, the unit received its first supersonic interceptor aircraft – MiG-25P fighters. After approximately two decades, they were succeeded by MiG-31s and an aircraft inventory of the regiment was extended with other 4th generation jets. Currently, the 790th Fighter Aviation Regiment operates approximately twenty five MiG-31 interceptors of BSM and BM variants, plus several Su-27SM, Su-27UB and Su-35 multirole fighters.

Crews of MiG-31 and Su-35 aircraft have participated in the mentioned October training flights, organized at the home airfield of the 790th Regiment. Within a framework of exercise scenarios, the pilots were able to practice interception and destroying of manned and unmanned aerial targets, trained how to evade from being intercepted by mock enemy fighters. They also mastered air combat techniques.

The second part of the training was focused on practising two-way communication with anti-aircraft and radio engineering units of the 6th Army, improvement of navigation skills and flying along a given route in a hostile environment. Those training missions were performed during a day and at night, operating a both high and extreme low altitudes.

An official photo set from the exercise was recently released by the Russian MoD. It is more unique than most, as it shows the fighter aircraft of the 6th Army on the background of beautiful, golden autumn colours. Unfortunately, name of the photographer who took those great photos, was not officially disclosed by the MoD.

The Helicopter Service Company (HSC), a member of the ‘Russian Helicopters’ holding has become a designated maintenance facility for PW207K Ansat helicopter engines in Russia and other countries of the Commonwealth of Independent States. The […]